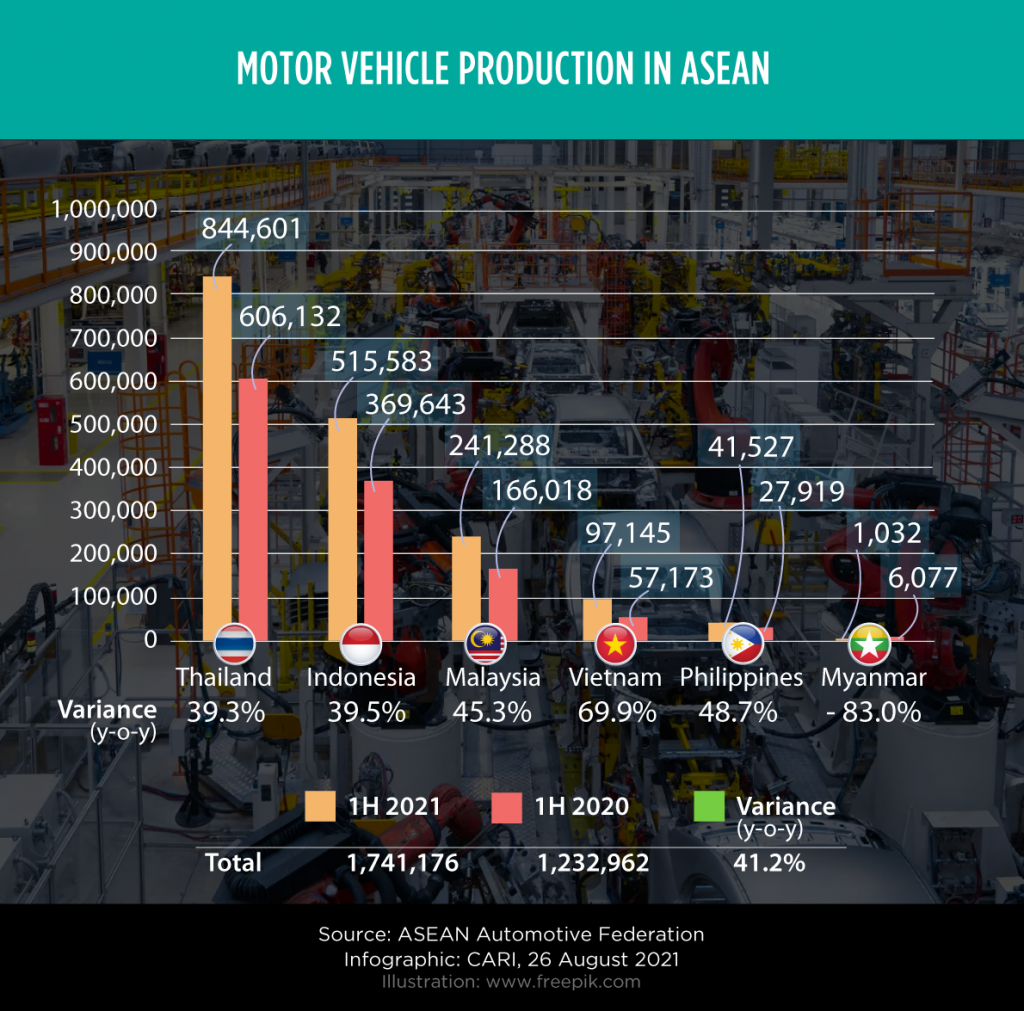 ASEAN, JAPAN
Lockdowns in ASEAN affect global automotive supply chains
(23 August 2021) COVID-19 lockdowns across the region continue to have a ripple effect on global automotive supply chains, with Japan’s Toyota Motor announcing last week that it would cut September’s targeted production volume by 40% due to a shortage of auto parts from Southeast Asian suppliers. The ongoing on-and-off factory shutdowns and production restrictions in the region—which houses some 30% of Japan’s auto parts manufacturers—is expected to cause the country’s automotive production to shrink by 30,000 to 40,000 units between August and September, and fall by around 19% to 25% year-on-year. The lockdowns have also affected automakers in the United States, China, and other regions.

ASEAN, INDIA
India’s exports to ASEAN expected to reach US$46 billion in FY22
(26 August 2021) India expects to export US$46 billion worth of goods to ASEAN countries in its fiscal year 2021-2022 fiscal year ending in March 2022, according to Indian commerce and industry minister Anupriya Patel. The minister also highlighted the potential for India and ASEAN to enhance their trade and investment partnership, since both sides have a large number of skilled workers, many complementary sectors and products, and a combined GDP of approximately US$5.8 trillion. ASEAN is also the third-largest recipient of Indian engineering product exports after the European Union and North America.

ASEAN, UNITED STATES
ASEAN finalizes trade facilitation initiatives with the US
(25 August 2021) ASEAN economic officials have finalized the 2021-2022 ASEAN-US Trade and Investment Framework Arrangement (TIFA) and the Expanded Economic Engagement (E3) Work Plan during a recent consultation with Deputy Assistant US Trade Representative for Southeast Asia and the Pacific Marta Prado. These instruments help guide trade and economic cooperation between the US and ASEAN, and cover areas such as the digital economy, MSMEs (micro, small and medium enterprises), and sustainable development. The TIFA was first concluded in 2006 and is reviewed annually, while the E3 will be submitted for ministerial endorsement in September 2021.

ASEAN, UNITED STATES
US offers to host APEC meeting in 2023
(24 August 2021) US Vice President Kamala Harris extended an offer to host the Asia Pacific Economic Cooperation (APEC) in the United States in 2023 to further deepen the US’ trade with ASEAN as she noted the region’s economic importance as the US’ fourth-largest export market. Harris also announced a slew of new bilateral partnerships on the occasion of her first stop in Asia, including agreements on cybersecurity, sustainable financing, as well as R&D for disease detection and treatment. Harris then made her first official visit to Vietnam, where she announced nearly US$100 million in official development assistance (ODA) for the country through the US Agency for International Development (USAID).

ASEAN, MEKONG
ASEAN to boost cooperation with the Mekong River Commission
(24 August 2021) The inaugural ASEAN-Mekong River Commission (MRC) Water Security Dialogue which was held last week concluded with both sides agreeing to cooperate in the areas of water resource planning, pollution management, and the establishment of an early forecasting system for water levels. According to Phonepaseuth Phouliphanh, acting chairperson of the MRC joint committee for 2021, ASEAN could help the MRC by contributing technical and financial support to help boost the protection of the Mekong River — a vital source of income for over 70 million people. The second ASEAN-MRC water security dialogue is slated for 2023 and will likely focus on policy discussions.

ASEAN
Economists downgrade ASEAN’s annual growth outlook
(25 August 2021) Weaker social safety nets, a less mature banking system hindering the injection of cash relief, as well as “growing discontent with job losses and officials’ handling of the pandemic” resulting in political instability and delayed investments could continue to derail ASEAN’s recovery from the pandemic, according to Moody’s Analytics. As such, the agency has downgraded the 2021 GDP forecast of the region’s economies, with Malaysia and Vietnam expected to be the worst hit. Moody’s sentiments were echoed by the latest survey results compiled by Bloomberg, which saw economists downgrading Malaysia’s growth outlook by 1.4 percentage points.

THE PHILIPPINES, CHINA
PH seeks US$1.9 billion in loans from China for infrastructure projects
(25 August 2021) The Philippines is seeking US$1.9 billion in loans from the Export-Import Bank of China to fund four infrastructure projects, said finance undersecretary Mark Dennis Joven. The four projects are the Davao-Samal bridge project, Mindanao flood control project, Subic-Clark Railway project, and three bridges under the Metro Manila project. According to Joven, China disbursed US$620 million in ODA last year out of its US$4.6 billion in existing projects. Separately, the Philippines’ transport department announced that it has awarded the joint venture between China Railway Design and Guangzhou Wanan Construction Supervision a contract to manage the US$1.6 billion Mindanao railway project.

SOUTH KOREA
South Korea raises interest rates for the first time in three years
(26 August 2021) The Bank of Korea announced this week that it has raised its policy rate by 25 basis points to 0.75% for the first time in almost three years, making it the first major Asian economy to do so since the COVID-19 pandemic began. The move comes as the central bank looks to tame financial risks pressuring the economy such as rising household debt and inflation. Fellow RCEP member New Zealand was expected to be the first to increase rates in the Asia Pacific region but that changed when Prime Minister Jacinda Ardern imposed a nationwide lockdown the day before the announcement was to be made.