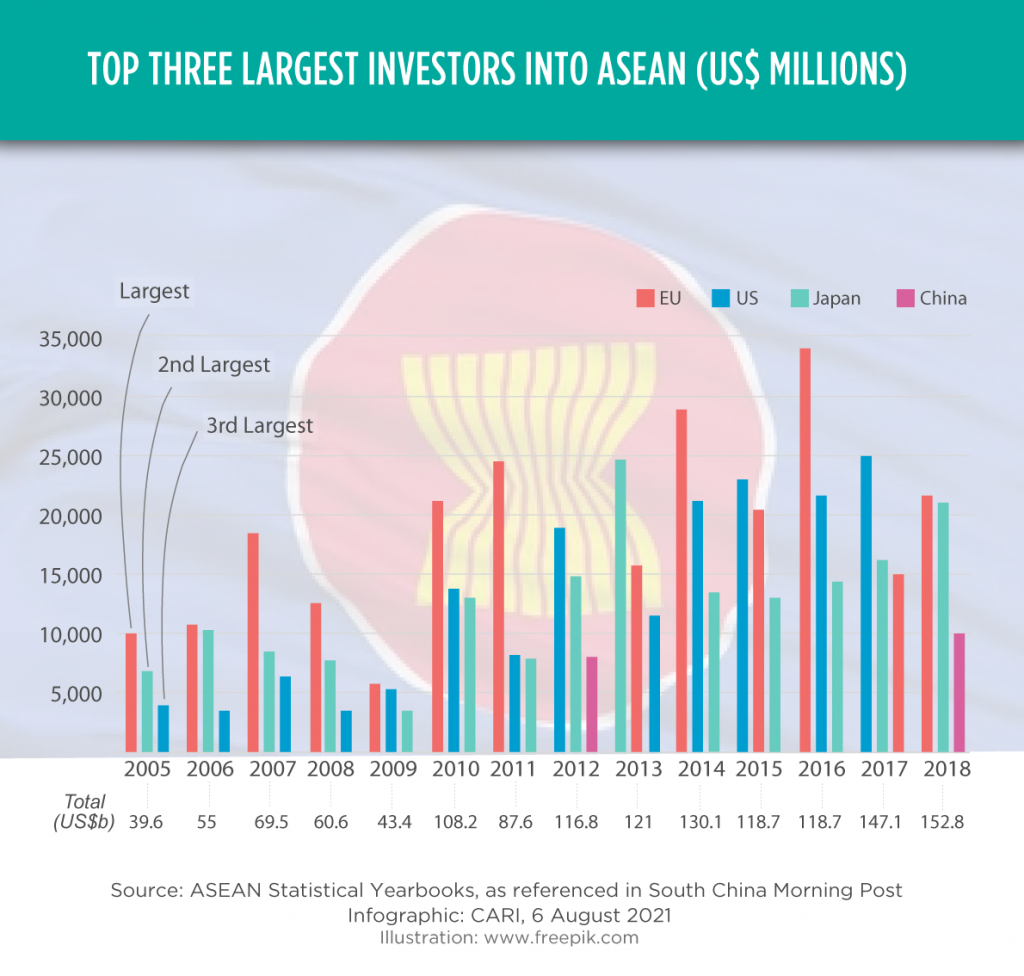 ASEAN
EU, Japan, and the United States remained ASEAN’s three largest investors over past two decades
(13 August 2021) A report recently published by the Australia National University (ANU) found that despite widespread media attention on Chinese investments into Southeast Asia, China has not in fact been the region’s largest investor over much of the past two decades. Instead, the EU, Japan, and the United States have remained Southeast Asia’s three largest investors within the period. China made it into the top three investors only twice over that period – specifically in 2012 and 2018. It is believed that the discrepancy between perceptions of China being the dominant investor in Southeast Asia and reality is due to the high visibility and intense global scrutiny over Chinese infrastructure projects, including the slow pace of certain projects and fears of debt entrapment for the host countries. Indonesia, Malaysia, and Singapore are listed as the top three destinations for Chinese investments into Southeast Asia during the period, together accounting for 57% of total investments.

ASEAN, UNITED STATES
US Vice-President Kamala Harris to visit Singapore and Viet Nam starting on 22 September 2021
(20 September 2021) On 22 September 2021, US Vice-President Kamala Harris will begin her first visit to Asia with a stop to Singapore, before visiting Viet Nam on 24 September. She will be expected to discuss security and economic matters with the leaders of both countries, as well as COVID-19 recovery efforts. Both countries are important to the American economy, with Singapore hosting the Asia headquarters of major US tech multinationals, while Viet Nam is an important node in global supply chains, including that of semiconductors. While it is unlikely that the US will rejoin the Trans-Pacific Partnership free trade agreement (now known as the CPTPP), of which Singapore and Viet Nam are signatories, Singapore’s foreign minister hopes that there will be progress on digital trade, such as on cross-border data flows and e-payments.

THAILAND
Thailand’s GDP grows 7.5% year-on-year during the three months to June 2021
(16 August 2021) Thailand’s GDP grew by 7.5% year-on-year in the three months to June 2021, marking the first expansion in six quarters. The economy had shrunk by 2.6% in the first quarter compared with 2020. Although Thailand had been battling a third wave of the pandemic during the entire second quarter, the government did not implement lockdown measures until late June. Private consumption rose 4.6%, jumping from a 0.3% contraction in the first quarter, while the exports of goods surged 30.7%, extending the 3.2% growth recorded in the first quarter. On a seasonally adjusted basis, the economy grew by 0.4% compared to the previous quarter. The overall outlook of the economy for 2021 remains poor, with authorities now projecting growth of 0.7- 1.2%.

INDONESIA
Indonesian central bank keeps its benchmark interest rate at record low of 3.5% amidst weak growth outlook
(19 August 2021) Indonesia’s central bank kept its benchmark interest rate unchanged at the record low of 3.5% amidst weak growth projections during the pandemic. Interest rates have been on hold since February 2021’s 25-basis point reduction, and are widely expected to stay at this level throughout 2021. The governor of the central bank stated that monetary policy will remain loose and accommodative in order to maintain the exchange rate and financial system amid low inflation, and to facilitate an economic recovery. The central bank is also keen to protect the rupiah amidst the risk that any potential future U.S. monetary policy tightening could spark a sell-off of emerging-market assets. The Indonesian government expects the economy to grow by 3.7%-4.5% in 2021.

MALAYSIA, INDONESIA
Malaysian bonds lag Indonesian debt as Malaysian fiscal outlooks deteriorates and political uncertainty increases
(19 August 2021) Malaysian ringgit bonds have lagged Indonesian bonds as the former’s fiscal outlook deteriorates and political uncertainty increases. Benchmark 10-year Malaysian debt has underperformed Indonesian securities, with the extra yield on the latter shrinking to 305 basis points, nearing its lowest in over three years. A worsening outlook for Malaysian bonds could hamper the Malaysian government’s efforts to plug its budget shortfall ahead of a possible general election in 2022, while the Indonesian government’s commitment to fiscal consolidation (sticking to its 2021 budget deficit target of 5.7%) has helped anchor confidence in rupiah notes. While benchmark yields on 10-year ringgit securities have fallen two basis points since end-June 2021 to 3.27%, yields on rupiah notes due in a decade slid almost 30 basis points this quarter to 6.32%.

JAPAN
Japan’s GDP rebounds in second quarter of 2021 with 1.3% annualized growth
(16 August 2021) Japan’s economy grew by 0.3% in the April-June period compared to the previous quarter, equal to an annualized pace of 1.3%. This was due to corporate capital spending turning positive despite sluggish consumer spending. This first turnaround in two quarters coincided with states of emergencies declared in the cities of Tokyo, Osaka and other areas, when measures such as curbing outings, shortening restaurant hours, and closing large commercial facilities were implemented. Japan saw negative growth in the April-June quarter of 2020, when a state of emergency was declared for the first time after the outbreak of COVID-19.

AUSTRALIA
Australia’s labor market softens in July 2021 due to outbreaks of COVID-19 in east coast
(19 August 2021) Australia’s labor market softened in July 2021 due to outbreaks of the Delta-variant of COVID-19 on the east coast of Australia, forcing lockdowns and curtailing economic activities in the country’s most populous region. Although the unemployment rate fell to its lowest level since 2008 (falling to 4.6%), this was largely due to a fall in the participation rate. Hours fell and the underemployment rate climbed, reflecting the pressures that work-from-home orders are beginning to have on the labor market. A slow vaccine rollout in Australia remains the biggest obstacle to the economy returning to normalcy and reopening the country’s borders.

NEW ZEALAND
New Zealand placed under nationwide lockdown due to single case of COVID-19 in Auckland
(17 August 2021) Prime Minister Jacinda Ardern has put New Zealand under a strict nationwide lockdown starting on 17 August 2021 after the country’s first COVID-19 case since February 2021 was detected in Auckland. Adopting a ‘go hard, go early’ strategy, all of New Zealand will undergo the toughest, level-four lockdown for at least three days from 18 August, while Auckland and Coromandel, a coastal town where the infected person also spent time, will be in lockdown for seven days. Under the new restrictions, schools, offices and businesses will close and only essential services will be operational. Citizens in the country have been living without restrictions since February 2021, although borders remain closed.