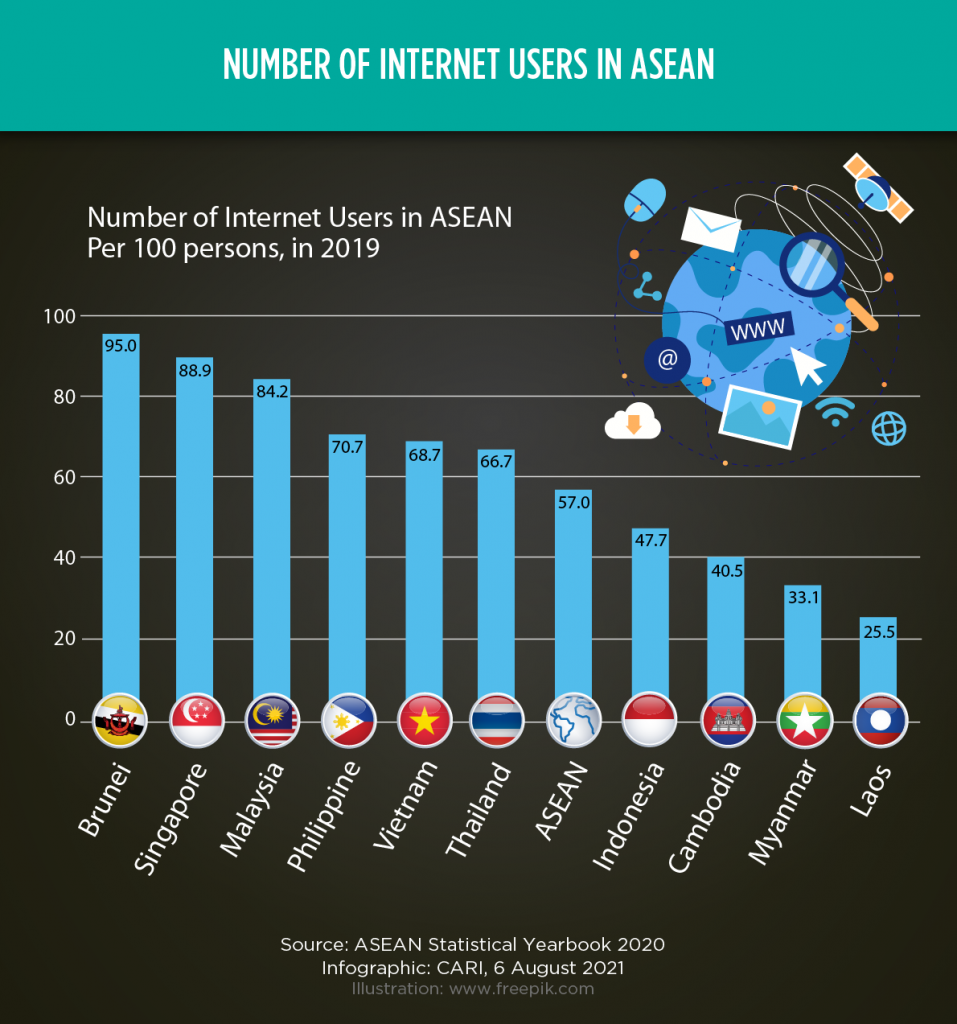 CAMBODIA
Cambodia aims for countrywide mobile and internet coverage by 2027
(11 August 2021) Cambodia aims to have countrywide mobile and internet coverage by 2027 under its 2021-2035 digital roadmap, according to telecommunications minister Chea Vandeth, as he acknowledged the poor performance of existing services. Several Cambodian telecom companies have been investing heavily in expanding their coverage and adding network capacity in recent years, though according to Smart Axiata chief executive officer Thomas Hundt, his company still awaits the approval of fund disbursements from the Ministry of Post and Telecommunications’ Universal Service Obligation Fund to proceed with more deployments. Telecom companies in Cambodia pay 2% of their gross annual revenue into the fund, which is then returned to them to invest in rural coverage.

INDONESIA
Indonesia launches new single-submission system for business licensing
(10 August 2021) Indonesian President Joko Widodo launched the country’s new business licensing system, the Risk-Based Online Single Submission System, to streamline and expedite permit approval procedures at all levels of government involved in issuing permits at the central and regional levels. The new system, which follows the previous addition of an article in the 2020 Omnibus Law on Job Creation that allows certain classes of low-risk businesses to get instant approval for their permit applications, will be able to accommodate applications for 1,702 classes of businesses. Total domestic and foreign direct investments grew by 10% year-on-year to US$30 billion in 1H21.

SINGAPORE
Singapore’s GDP expands by 14.7% in the second quarter of 2021
(11 August 2021) Singapore’s economy grew by 14.7% year-on-year in 2Q21 when compared to the same period last year during which it first entered its COVID-19 circuit breaker. On the back of this “better than expected” performance, the Ministry of Trade and Industry has upgraded its GDP growth forecast for the year to 6-7% as it expects to continue to see a gradual recovery in the second half of the year supported by its export sectors. The recovery was similarly seen in its manufacturing sector, which grew by 17.7% on the year, with transport and precision engineering leading the way.

VIETNAM
Vietnam aims to become ASEAN’s leading artificial intelligence hub by 2030
(11 August 2021) Vietnam has published a national strategy that aims to turn the country into a leading hub in ASEAN for the research, development, and application of artificial intelligence by 2030. According to deputy science and technology minister Bui The Duy, the plan will involve creating 50 interconnected open databases in economic sectors, as well as developing three national big data and high-performance computing centres, among other things. To this end, the government is currently developing a legal framework to support the development of the field of artificial intelligence and constructing the National Innovation Centre in Hoa Lac Hi-Tech Park to support the country’s startup ecosystem.

LAOS, VIETNAM
Laos-Vietnam bilateral trade grew by 36.5% y-o-y in the first half of 2021
(11 August 2021) Trade in goods between Laos and Vietnam grew by 36.5% year-on-year in 1H21, reaching US$671 million. Of the sum, Laos’ imports from Vietnam grew by 19% on the year, totalling US$329 million. Vietnam is currently the third-largest investor in Laos with 414 investment projects valued at US$4.1 billion, behind only China and Thailand. These figures were announced during a meeting between Laotian deputy prime minister Dr Sonexay Siphandone and his Vietnamese counterpart Le Van Thanh, during which both sides discussed projects such as the Vientiane-Hanoi Expressway, Laos-Vietnam Railway, Nong Khang Airport, and the sale of electricity between the two countries.

CAMBODIA, MALAYSIA
Maybank becomes first international partner to Cambodian central bank project
(12 August 2021) Malaysia’s Malayan Banking Berhad (Maybank) has signed on as the first international transfer partner to the National Bank of Cambodia’s blockchain initiative Bakong and has so far executed around US$3 million in transactions since it first joined the project in June 2021. Cambodia received some US$1.2 billion in remittances from international workers abroad in 2020, with Malaysia being its fourth most popular source of overseas remittance last year, accounting for 1.4% of all inbound funds. The collaboration, which aims to help lower the cost of cross-border remittance for Cambodians abroad, allows Maybank clients to send up to US$2,500 to their Bakong e-wallet accounts via Maybank’s mobile banking application.

SOUTH KOREA
South Korea creates new ministerial post to focus on the energy sector
(9 August 2021) South Korea created a new vice-ministerial post within its Ministry of Trade, Industry and Energy and appointed Park Ki-young as its first ministerial appointment dedicated to its energy sector. Newly-appointed vice-minister Park said in his inaugural speech that he plans to “reconstruct the current fossil fuel-based energy supply and demand system and market structure into clear energy-focused ones” and that he would also focus on creating jobs and promoting the new energy sector. Park previously headed the energy portfolio under the ministry’s planning and coordination office.

AUSTRALIA
Australia’s technology heavyweights form alliance to grow the industry
(11 August 2021) Australia’s leading technology companies including Google, Atlassian, and Afterpay have come together to form the Technology Council of Australia, an alliance that aims to provide a unified voice to government on policy matters that impact the sector. The launch was accompanied by the publication of a research report which found that its technology industry employs 861,000 Australians and generated US$167 billion in economic output in the 2021 financial year, equivalent to 8.5% of GDP. The council aims to increase this figure to US$250 billion by 2031, with over one million employed by 2025.

CHINA
China unveils new five-year plan to develop its regulatory environment
(11 August 2021) China published a sweeping five-year blueprint that aims to establish and enforce legislation in areas such as national security, technology and monopolies that take a “long-term view” and comprise “new and higher requirements for the construction of a government under the rule of law.” The move comes as the government moves to tighten regulations to curb unwanted behaviour and protect “key areas related to the vital interests of the people.”