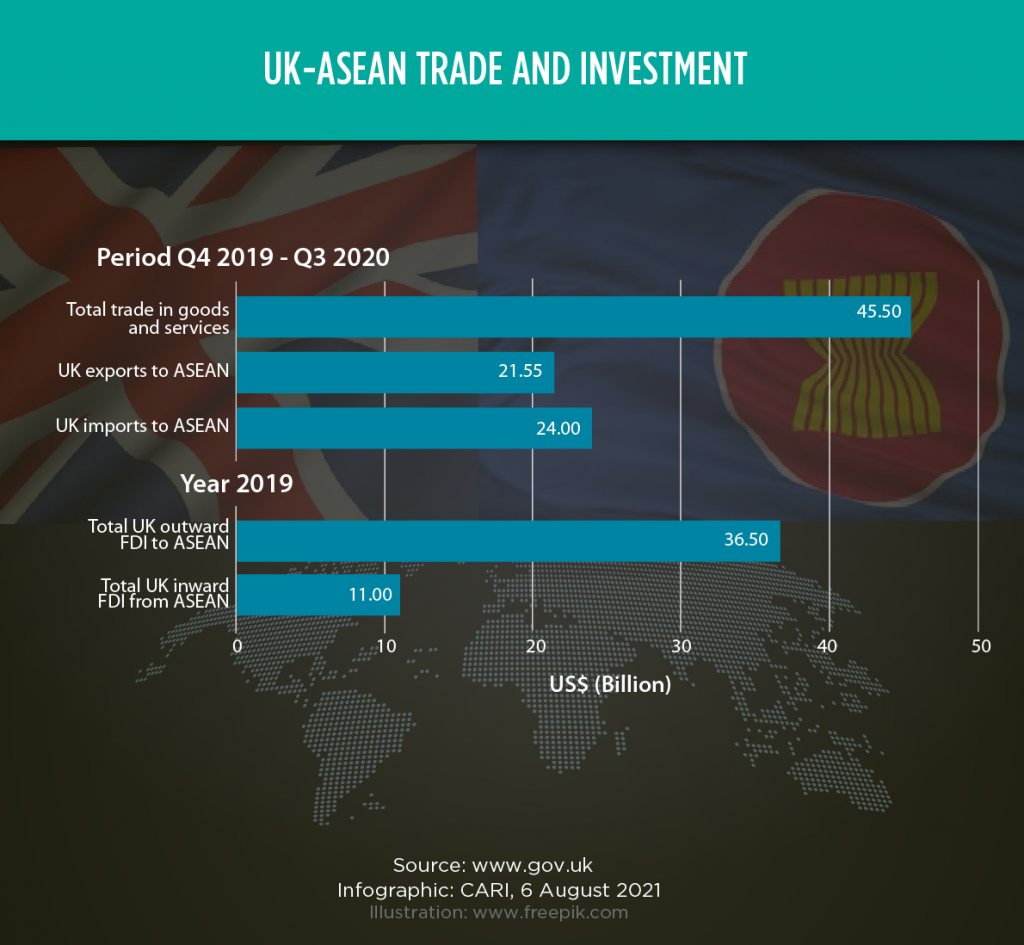 ASEAN, UK
UK officially becomes Dialogue Partner of ASEAN, to strengthen cooperation on COVID-19 and climate change
(05 August 2021) The UK officially became a Dialogue Partner of ASEAN on 05 August 2021 during a virtual ceremony attended by the UK Foreign Secretary and ASEAN Foreign Ministers. The UK had submitted its application to become a Dialogue Partner in June 2020, and during this time the UK Foreign Secretary had attended two UK-ASEAN Ministerial Meetings and hosted the ASEAN Chair at the G7 Foreign & Development Ministers meeting in May 2021. Dialogue Partner status will formalize UK-ASEAN relations, including through annual Foreign and Economic Ministers meetings along with other Ministerial engagements. The enhanced partnership will allow both parties to boost trade and strengthen cooperation on issues such as COVID-19 and climate change.

ASEAN
ASEAN financial markets feeling brunt of Delta surge and low vaccination rollout
(06 August 2021) Southeast Asian financial markets are feeling the brunt of a surge in the Delta variant of COVID-19 as well as a low vaccination rollout. While Asian stock markets are lagging their global peers in general, ASEAN shares in particular stand out for their underperformance. Vietnamese and Filipino benchmarks have led global declines over the past month. Sovereign bonds from Thailand, Philippines and Malaysia have all taken a hit, with local total return indexes down about 1% in dollar terms since the end of June 2020. Southeast Asian currencies have also taken a hit, with the Thai baht among the worst-performing currencies in the world after weakening almost 4% against the US dollar this quarter. Malaysia’s ringgit and the Philippines peso have slumped nearly 2% and 3% respectively against the US dollar this quarter.

INDONESIA
Shares of Indonesian online marketplace PT Bukalapak.com surge 25% on first day of trading
(06 August 2021) Shares of Indonesian e-commerce platform PT Bukalapak.com surged 25% on its first day of trading, after having raised US$1.5 billion in Indonesia’s largest initial-public offering (IPO). Investors’ interest in the IPO reflects increased general interest in e-commerce companies operating in Southeast Asia. Bukalapak’s gross merchandise value is projected to reach US$12 billion in 2022 from the estimated US$9 billion in 2021. In Jakarta, three fourths of the 44 companies that listed on the Jakarta bourse in the past 12 months ended their first session at least 25% higher. A successful debut by Bukalapak is expected to set the tone for the upcoming IPOs for other regional tech giants.

THE PHILIPPINES
The Philippines’ purchasing managers’ index (PMI) eases to 50.4 in July 2021
(03 August 2021) London-based global information provider IHS Markit Ltd reported that the Philippines’ purchasing managers’ index (PMI) in July 2021 eased to 50.4 from 50.8 in June 2021. However, a measurement above 50.0 indicates a year-on-year expansion in manufacturing activities. IHS Markit also stated that there were fewer job losses in July 2021, being at the slowest pace since March. However, factory output and new orders declined year-on-year in July 2021, with domestic demand and production levels still impacted by the pandemic. IHS Markit noted that domestic demand in the Philippines must improve throughout the second half of 2021 to help underpin growth within the year.

THAILAND
Thailand to expand its quasi-lockdown measures to about 40% of population
(01 August 2021) Thailand is set to expand its quasi-lockdown measures to its regions that were hardest hit by the COVID-19 pandemic and home to about 40% of the population. The most stringent restrictions in 13 provinces, which includes Bangkok, will be extended to 31 August 2021, while these curbs will be expanded to 16 additional provinces from 03 August onwards. Thailand’s COVID-19 task force will then assess the outbreak after two weeks and may ease curbs for some regions starting on 18 August. The Thai healthcare system has been overwhelmed by the sudden surge in infections and hospitalizations as the country grapples with the more transmissible Delta variant.

JAPAN, CHINA
Japan’s video game shares plunge following amid fears of Chinese regulatory crackdown
(03 August 2021) On 03 August 2021, Japan’s video game shares plunged following comments made in Chinese-state media indicating that the Chinese video game industry might be the next target of Chinese regulators. Game stocks which were affected including Koei Tecmo Holdings Co. and Nexon Co. China composed 28% of Nexon’s revenues alone in the last fiscal year, with the company’s stocks finishing 6.5% lower. Nexon stocks are currently the second-worst performer on the Nikkei 225 Stock Average in 2021. Japan’s video game industry remains heavily interlinked with the Chinese market, making it vulnerable to any regulatory changes in the country.

NEW ZEALAND
Cheap mortgages push housing prices up nearly 30% as government tries to cool market
(06 August 2021) Low mortgages in New Zealand are pushing domestic house prices to record highs, with current government efforts to cool the market seemingly having little impact. Nearly 15,000 homes sold for more than US$705,100 during the last 12 months, compared with just 5,500 in 2020. The government has attempted to halt runaway prices through new taxes for property investors and putting checks on “flipping” activities. Such investments have pushed house prices up by nearly 30%. New Zealand’s central bank has warned that housing prices are above sustainable levels, and proposed tighter mortgage lending and debt-to-income restrictions.

AUSTRALIA
Australia’s central bank stands by decision to trim purchase of government bonds
(03 August 2021) On 03 August 2021, the Reserve Bank of Australia (RBA) affirmed its decision made in July 2021 to trim its purchases of government bonds to AU$4 billion a week from September 2021 onwards from the current weekly pace of AU$5 billion. It also kept its cash rate at 0.1% for its eighth straight meeting, and stressed that interest rates will not be raised until inflation was sustainably within its 2-3% target band, a goal unlikely to be met before 2024. The RBA believed that the recent COVID-19 outbreaks in major Australian cities will only have a temporary impact on the economy.