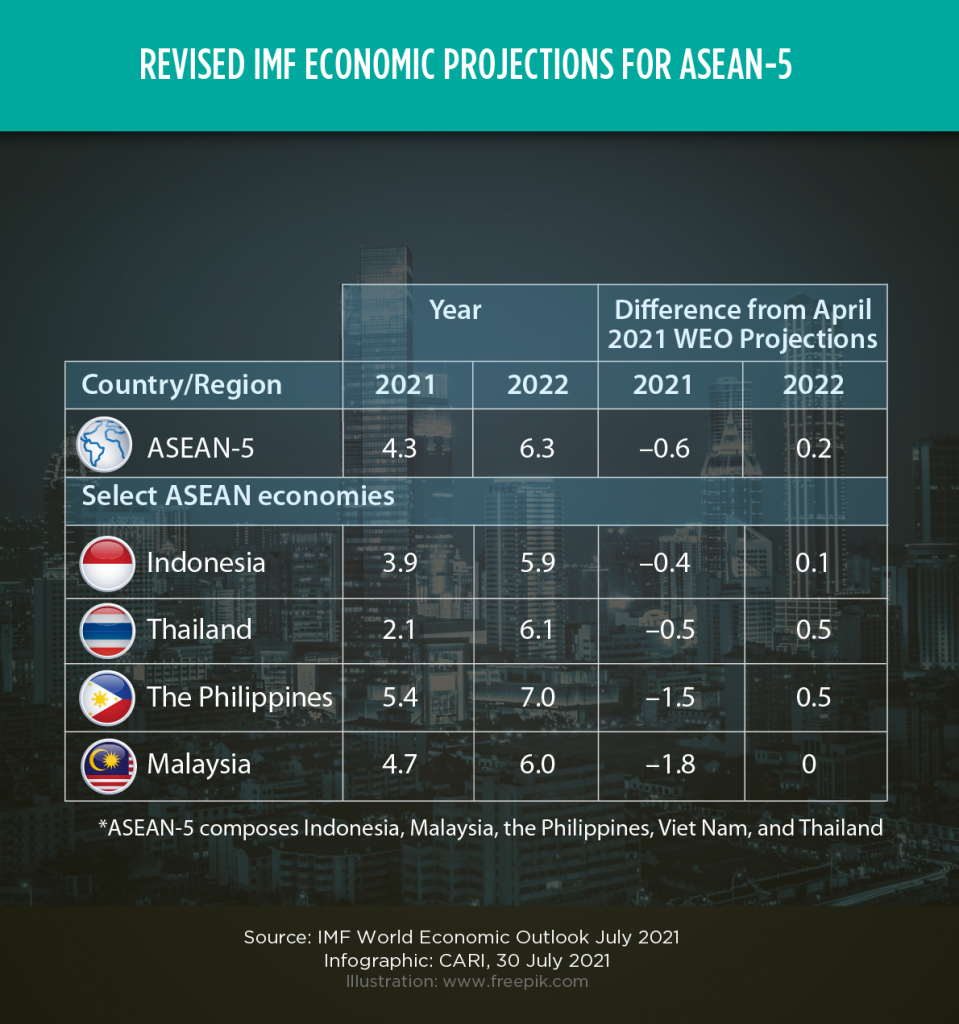 ASEAN
IMF downgrades 2021 economic outlook for ASEAN-5 countries to 4.3% due to recent COVID-19 waves
(28 July 2021) In the IMF’s most recent World Economic Outlook released in July 2021, the IMF downgraded its 2021 economic projections for the ASEAN-5 countries by -0.6% to 4.3%. The ASEAN-5 countries comprise Malaysia, Thailand, Viet Nam, Indonesia, and the Philippines. The downgrade was due to recent COVID-19 waves causing a drag on the economies of the region. The IMF also revised the ASEAN-5’s growth projections for 2022 by 0.2% to 6.3%. For overall emerging market and developing economies, the forecast for the group was revised downwards by -0.4% to 6.3% in 2021, largely because of growth markdowns for emerging Asian economies. The IMF maintained its 6% forecast for global economic growth for 2021, and upgraded its 2022 growth projections by 0.5% to 4.9%.

INDONESIA
Hyundai and LG Energy partner together to build electric vehicle battery factory in Indonesia
(29 July 2021) South Korean companies Hyundai and LG Energy signed a memorandum of understanding with the Indonesian government to establish a joint venture to manufacture electric vehicles (EV) battery cells in Indonesia. Both companies will invest a total of US$1.1 billion to build a battery cell plant in Karawang in eastern Jakarta, with both companies to hold 50% ownership. The Indonesian government, for their part, will offer incentives and rewards to support the plant. Hyundai stated they expected construction on the Indonesian plant to start in the fourth quarter of 2021, and to be completed by the first half of 2023. Mass production of EV battery cells will commence in the first half of 2024. Indonesia is one of the world’s largest producers of nickel, a key raw material in EV batteries.

INDONESIA
Despite outperforming regional peers, Indonesian sovereign bonds failing to attract foreign investors
(30 July 2021) Despite the total returns of Indonesian sovereign bonds rising to 1.6%, the highest among regional peers, they are failing to attract heavy foreign inflows. The country’s 10-year yields dropped by 28 basis points in July 2021, with Bank Indonesia buying up debt while supply has been limited. Indonesia’s debt market is set to see its first monthly outflow in four months. As well, foreigners comprised 7.6% of bids at a conventional rupiah bond auction held last week, the lowest since March 3. Foreign demand for Indonesian debt, a bellwether for emerging markets, has been falling since early 2020 as debt monetisation to fund pandemic relief efforts and concerns over the central bank’s independence eroded investor confidence.

SINGAPORE
Singapore to start allowing quarantine-free travel in September 2021 once 80% of population is vaccinated
(26 July 2021) The Singaporean government has stated it will start to allow quarantine free travel in September 2021, marking the first time it’s set out a timeline to reopen its borders that have been mostly shut for more than a year. The country expects to have fully vaccinated 80% of its population by then, allowing authorities to ease larger restrictions, including allowing larger gatherings of fully vaccinated people. In September, Singapore is expected to start reopening borders and establishing travel corridors with other countries or regions that have infections under control. Once key inoculation rates have been reached in Singapore, fully vaccinated people may be able to travel without serving a 14-day hotel quarantine on their return. Quarantine measures may be replaced with a rigorous testing regime depending on the risk levels of the countries visited.

VIET NAM
Coffee exports from Viet Nam declining because of depleted inventories, COVID-19 outbreak, and container shortages
(29 July 2021) Coffee exports from Viet Nam, the world’s largest producer of robusta coffee, are declining due to depleted farmer inventories, a worsening COVID-19 outbreak in Viet Nam, and container shortages. This is despite a global surge in global coffee prices fueled by frigid weather in Brazil destroying trees. This helped lift the prices of Arabica coffee by 25% in July 2021, with London prices at its strongest since 2017. Vietnamese coffee exporters have not been able to benefit from the global price rally due in part to surging shipping costs, which has discouraged importers from purchasing beans in Viet Nam. As well, there’s been growing COVID-19 cases in the five provinces of the Central Highlands, a key coffee-growing region. Shippers are worried the logistical challenges may persist through the end of 2021 when the new harvest rolls in and exports normally rise.

JAPAN
Japan extends its state of emergency in Tokyo and expands it to four other regions
(30 July 2021) On 30 July 2021, the Japanese government extended its state of emergency in Tokyo and southern Okinawa until 31 August 2021, while also expanding it to the provinces of Saitama, Kanagawa and Osaka. Less than 30% of residents in Japan are fully vaccinated so far, with the government stating that all those who want to get vaccinated should be able to do so by October or November 2021. Japan is currently straining to contain the more transmissible Delta variant of COVID-19, with daily cases nationwide topping 10,000 for the first time on 29 July 2021. While the Japanese government has imposed a series of states of emergencies, these orders are mostly voluntary and not mandatory.

SOUTH KOREA
South Korean factory output surges by 11.9% year-on-year in June 2021
(30 July 2021) South Korea’s factory output surged by 11.9% year-on-year in June 2021, following a 14.9% cent rise in May when the country posted the fastest growth since February 2012. That extended annual growth to eight consecutive months. Data also showed that services sector output in June rose a seasonally adjusted 1.6% from a month earlier, while retail sales rose 1.4%. Industrial production rose by a seasonally adjusted 2.2% in June from a month earlier, rebounding from a 1.0% contraction in May. A breakdown of data showed production of semiconductors rose 8.6% on a month-on-month basis, while that of cars was also up 6.4%.

AUSTRALIA
Housing prices in state capitals across Australia soar on all-time low interest rates and lack of properties on the market
(29 July 2021) Housing prices in state capitals across Australia are seeing a surge due to all-time low interest rates and a lack of properties on the market. Six cities have seen record prices for the third quarter in a row, while Sydney, Canberra, Hobart and Darwin have seen property values rise by over 20% in the last year. Sydney saw median house prices reach a record US$1.04 million after rising by more than AU$1,200 a day over the last three months. In June 2021, official figures revealed that Australia’s economy had continued its rapid rebound, growing larger than it was before the COVID-19 pandemic. This was due in part to a soaring demand for commodities around the world, as well as consumer and business expenditure.