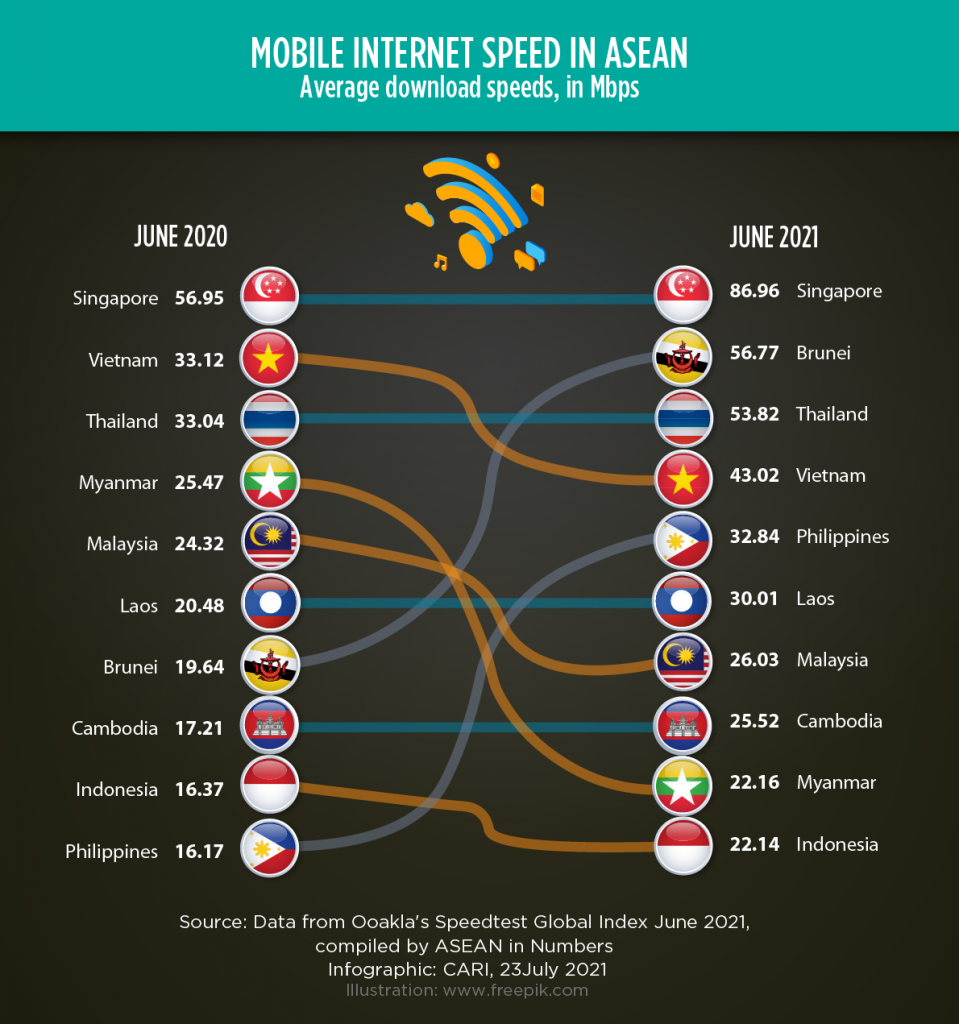 ASEAN
ASEAN countries experienced an increase in mobile speed between June 2020 and June 2021; except Myanmar
(15 July 2021) Singapore has increased its mobile internet speed from 56.95 Mbps (June 2020) to 86.96 Mbps (June 2021) in average download speed to maintain its top place in the region according to the Ookla’s Speedtest Global Index for June 2021. Myanmar was the only country experiencing a drop in internet speed, while Malaysia ranked the lowest in speed increase at a mere increase of 1.71 Mbps download speed between June 2020 and June 2021. During Q2 2021, Singtel was the fastest mobile provider in Singapore, achieving a Speed Score of 83.83. In Malaysia, Digi edged out Maxis as the fastest mobile provider, earning a Speed Score of 30.20 to Maxis’ 29.92. Telkomsel was the fastest major mobile provider in Indonesia, earning a Speed Score of 28.02. In Vietnam, Viettel once again claimed the top spot as Vietnam’s fastest mobile, earning a mobile Speed Score of 44.16. The Speedtest Global Index compares internet speed data from around the world monthly. Data for the Index comes from the hundreds of millions of tests taken by real people using Speedtest every month.

CAMBODIA
China tops list of investors in Cambodia
(20 July 2021) China was ranked first in terms of foreign direct investment (FDI) equity inflows to Cambodia in the first half of this year at about US$2 billion according to Wang Wentian, Chinese ambassador to Cambodia. Major projects invested by Chinese companies include the Phnom Penh-Sihanoukville Expressway, a coal-fired power station in Preah Sihanouk province and the Siem Reap-Angkor International Airport. According to the Council for the Development of Cambodia (CDC), China accounted for 69% of total FDI stock. Bilateral trade between Cambodia and China surged 1.4% last year over 2019, to US$9.56 billion, according to the ambassador. Cambodia and China plan to boost bilateral trade to US$10 billion by 2023.

MALAYSIA
Shell launches sale of stakes in Malaysian oil and gas fields
(22 July 2021) Royal Dutch Shell launched the sale of its stakes in oil and gas fields it does not operate off the coast of Malaysia, according to a document seen by Reuters. The Anglo-Dutch company announced in March that it was considering selling its stakes in the Baram Delta EOR and the SK307 production-sharing contracts which are operated by Petronas Carigali Sdn Bhd, a unit of state energy firm Petronas. The sale process for the two stakes, launched this month, is being run by investment bank J.P. Morgan, according to the sales document. The sale is part of Shell’s strategy to focus its oil and gas production in nine hubs as it gradually reduces output and grows investments in low-carbon energy to reduce greenhouse gas emissions.

SINGAPORE
One of the world’s largest inland floating solar PV systems opens in Singapore
(14 July 2021) A 60 megawatt-peak (MWp) floating solar photovoltaic (PV) system on Tengeh Reservoir was officially opened on 14 July with Prime Minister Lee Hsien Loong hailing the project as “one big step forward towards environmental sustainability”. Spanning 45 hectares, the equivalent of about 45 football fields, the Sembcorp Tengeh Floating Solar Farm contains 122,000 solar panels, which are durable enough to last 25 years. It is also one of the world’s largest inland floating solar PV systems, said national water agency PUB and Sembcorp Industries in a joint press release. Electricity generated from the solar farm will be sufficient to power Singapore’s five local water treatment plants, offsetting about 7% of PUB’s annual energy needs, said Sembcorp and PUB. Other floating solar PV projects in the pipeline include ones at Lower Seletar Reservoir and Bedok Reservoir. They are scheduled to be completed this year.

THAILAND
Toyota halts factories in Thailand as COVID hits supply chain
(22 July 2021) Japanese auto group Toyota Motor has halted operations at its three factories in Thailand as the country’s delta-variant COVID epidemic disrupts the supply of key automobile parts. The closures underline how the pandemic is still putting the automobile supply chain under strain. The stoppage started on 21 July and will last at least until 28 July. The factories’ annual production capacity is 760,000 units, but in 2020, 440,000 automobiles were manufactured. Thailand is the third-biggest overseas production hub for Toyota, after China and the U.S. This is the second time Toyota’s production in Thailand has been disrupted by the COVID-19 pandemic. The factories closed during Thailand’s first wave in March 2020.

THE PHILIPPINES
The Philippines to bar travel from Malaysia, Thailand to curb Delta’s spread
(23 July 2021) The Philippines will ban travellers coming from Malaysia and Thailand, as well as tighten restrictions in the Manila area, in a bid to prevent the spread of the contagious Delta variant of the coronavirus. To try and prevent further domestic transmission of the Delta variant, President Rodrigo Duterte has placed the capital region, an urban sprawl of 16 cities that is home to more than 13 million people, and four provinces under stricter coronavirus curbs until the end of July. With more than 1.53 million infections and nearly 27,000 deaths, the Philippines has the second-highest number of coronavirus cases and casualties in South-East Asia, next to Indonesia.

VIETNAM
Standard Chartered revises growth forecast for Vietnam down
(22 July 2021) Standard Chartered has lowered its growth forecast for Vietnam for 2021 from 6.7% to 6.5%. The bank maintains its 7.3% growth forecast for 2022 and continues to expect a post-Covid-19 economic acceleration. “We believe Vietnam is moving towards its goal of becoming a regional supply-chain hub, a modern industrial economy and a high-income country in the future,” said Tim Leelahaphan, Economist for Thailand and Vietnam, Standard Chartered. Standard Chartered’s economists anticipate domestically-oriented sectors such as retail are likely to be the hardest hit if the current Covid-19 wave persists. The focus now is on whether the impact on the industrial sector will be temporary or more long-lasting. While the global pandemic has weighed on Vietnam’s economy via reduced tourism, supply-chain disruptions and weaker overseas demand, external indicators are showing a strong recovery. Exports in the first half of the year rose 28.4% year-on-year and imports rose 36.1%.

CHINA
China’s Trade Data for H1 2021 Shows Stronger Than Expected Results
(19 July 2021) China’s latest trade data brought the first half of the year to a close with stronger than expected results, as the country’s economic performance continued to outpace projections. In June, China’s exports increased by 32.2% year-on-year, up from 27.9% in May. Imports, meanwhile, grew by 36.7%, down from 51.1% the month before. The ASEAN bloc, however, remains China’s largest trade partner. Through the first half of the year, exports and imports both rose by 27.8%, leading to an identical 27.8% total trade increase. Trade with Belt and Road Initiative countries increased by 27.5%, and trade with RCEP members increased by 22.7%.

SOUTH KOREA
Despite the New Southern Policy drive, South Korea lags behind China, Taiwan in ASEAN cooperation
(21 July 2021) Despite state-driven efforts to strengthen ties with Southeast Asian nations, South Korea‘s trade and investment with the region still lag behind China and Taiwan, according to the Federation of Korean Industries 21 July 2021. The government’s drive to widen the nation’s diplomatic horizons, its share in the ASEAN countries’ overseas imports has decreased to 6.9% in 2020 from 7.7% in 2017, data showed. This was largely led by last year’s 18.2% decline in the nation’s outbound shipments to Indonesia, which boasts the largest population in Southeast Asia. With a slowdown in exports to Southeast Asia, trade volume between Seoul and the ASEAN countries was estimated at US$164 billion last year, which fell short of the US$200 billion goal set by the government four years ago, the research agency said. Meanwhile, the number of people traveling between them increased more than 10% every year from 2010 to exceed 12 million in 2019, but it failed to reach the government’s target of 15 million by the end of 2020 due to the COVID-19 pandemic, it added.

NEW ZEALAND
New Zealand suspends quarantine-free travel with Australia
(23 July 2021) New Zealand will pause its quarantine-free travel arrangement with Australia for at least eight weeks starting the night of 23 July, Prime Minister Jacinda Ardern said, as Australia fights an outbreak of the highly infectious Delta virus variant. The travel bubble had been launched as test-free as well as quarantine free, but New Zealand introduced a testing requirement that made it more costly for Australians to visit this month. The New Zealand government said for the next week there will be return flights for New Zealanders from all Australian states and territories that will require proof of a negative pre-departure test. Passengers arriving from Sydney will be required to spend two weeks in government-managed quarantine.