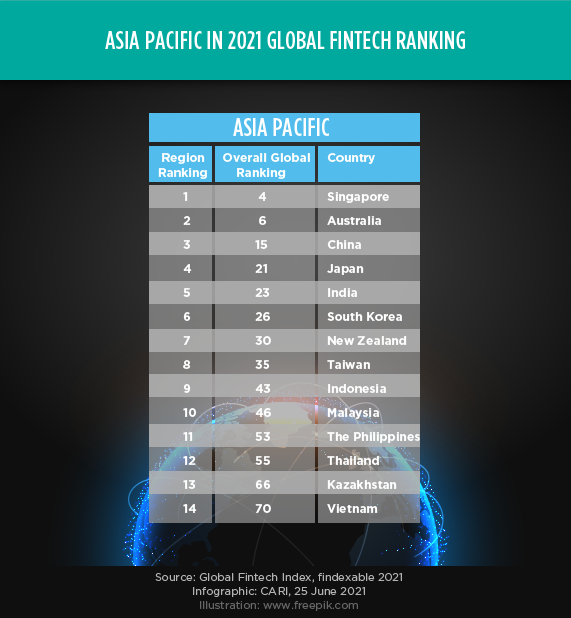 RCEP/ ASEAN
Singapore ranks 1st in the Asia Pacific and 4th globally in 2021 Global Fintech Ranking
(25 June 2021) Singapore has fallen one rung to fourth place in the 2021 Global Fintech Rankings. While it still takes the top spot among countries in the Asia-Pacific, the Republic faces stiff competition from countries like Australia, China and Japan, which have moved up the leaderboard this year. Other cities in Southeast Asian countries, like Jakarta, have moved up 27 places in the city rankings to number 32 globally, whereas Kuala Lumpur is up 11 places to the 67th spot. According to CB Insights, the number of fintech unicorns has increased from 61 in April 2020 to 108 a year later, with the combined valuation of these unicorns more than doubling to US$440 billion.

INDONESIA
Indonesia plans to start its own bullion bank by 2024 to boost domestic gold trade
(24 June 2021) The government of Indonesia is planning to establish a national bullion bank that will allow the trading of gold domestically as soon as 2024, according to the country’s Trade Minister Muhammad Lutfi. Indonesia is the world’s tenth biggest gold producer, with the Grasberg mine in Papua holding one of the largest reserves across the world. The nation is ranked number one among Southeast Asia’s major gold miners. According to the minister, Indonesia has to export most of its gold to such countries as Singapore and Australia, hubs for trading rather than consumption. An onshore bullion bank able to provide clearing, hedging, trading and vaulting of gold and precious metals, would cut the need to import gold products after they’re certified overseas. The measure will help to develop the local industry by providing financing opportunities, and let the central bank use gold instruments to manage stability, according to Iskandar Simorangkir, deputy for macroeconomics and finance policy coordination at the Coordinating Ministry for Economic Affairs.’.

LAO PDR
Japan’s Mitsubishi Corporation investing in Southeast Asia’s largest onshore windfarm in Laos
(21 June 2021) Japan’s Mitsubishi Corporation has just boosted the development of what will be Southeast Asia’s largest onshore wind farm in southern Laos, by announcing a major investment in the project. Power from the wind farm will be sold to Vietnam Electricity, the state-owned electric power company under a 25-year agreement. The 600-megawatt capacity wind farm project, to be located near the Sekong River in Laos’ Sekong and Attapeu provinces, will be developed through an intermediate holding company, Diamond Generating Asia, Ltd., Mitsubishi’s wholly-owned subsidiary in Hong Kong, together with Impact Electrons Siam Co Ltd. in Thailand. The amount of Mitsubishi’s investment was not made public.

SINGAPORE
Singapore to increase spending on ICT to S$3.8 billion (US$2.83 billion); more projects for SMEs
(23 June 2021) Singapore will spend an estimated S$3.8 billion (US$2.83 billion) on the procurement of information and communications technology (ICT) this financial year, up nearly 10% from a year ago, said the Government Technology Agency (GovTech). The projected spending will go towards transforming the Government’s digital services and digital infrastructure. Of the S$2.7 billion (US$2.01 billion), nearly half (44%) will go to developing digital services on the cloud. The agency also said that more than 80% of the ICT contracts will be made easily available for SMEs through “streamlined procurement methods”. Meanwhile, around 13% of the estimated spending for this financial year will go to ramping up the adoption and deployment of artificial intelligence (AI) for the public sector.

VIETNAM
Vietnam tighten its grip on social media under the New Code of Conduct
(21 June 2021) Vietnam’s Ministry of Information and Communications issued a Code of Conduct (COC) for social media behaviour on 17 June. The COC targets three major groups comprising of social network users (including individuals and organizations), officials and employees of State authorities and social network service providers (including onshore and offshore service providers). The COC encourage users to use real names and requests platforms to cooperate with authorities to remove illegal content. Social media platforms are also encouraged to devise ways to protect the vulnerable segments of society, including the poor, ethnic minority communities, children and the disabled. The code asks government officials to provide feedback on opinions expressed on social media platforms. Most of the contents of the COC are otherwise quoted from the 2006 Law on Information Technology and Decree 72, and therefore, any violation of the COC may correspondingly be punished in line with those provisions of law.

CAMBODIA
Ministry of Commerce: RCEP could be ratified by 1 Jan 2022
(22 June 2021) The Cambodian Ministry of Commerce expects the Regional Comprehensive Economic Partnership (RCEP) agreement to enter into force on Jan 1, 2022. A virtual intergovernmental meeting was held on June 21 to present a draft law authorising the RCEP’s ratification to a National Assembly committee. Speaking at June 21’s meeting, Minister of Commerce Pan Sorasak stressed that with its numerous merits, the RCEP is “absolutely necessary” for the economic integration of Cambodia into the region and the world.

JAPAN/ ASEAN
Japan pledges US$10 billion for energy renewables and LNG projects to drive ASEAN energy transition
(21 June 2021) Japan has offered ASEAN energy ministers US$10 billion in public finance for renewables and LNG projects, as part of a package of measures aimed at helping the group of 10 Southeastern Asian economies accelerate their moves toward energy transition. Japan’s package of actions, dubbed the Asia Energy Transition Initiative (AETI) and set to include a wide range of support measures for the energy transition in ASEAN countries, was welcomed by ASEAN energy ministers. Japan also proposed the idea of the Asia Energy Transition Finance scheme, as the region will need finance to achieve its diverse energy transition arrangements, with projects such as gas-fired power plants potentially not able to secure needed finance in the face of global headwinds against fossil fuels. The US$10 billion financial support aims to help ASEAN countries introduce renewables and energy conservation as well as LNG to transit away from coal.

HONG KONG
Hong Kong actively applying to join RCEP says financial chief
(24 June 2021) Hong Kong has been actively applying to join the Regional Comprehensive Economic Partnership (RCEP), said Financial Secretary Paul Chan on 24 June. Joining the RCEP will not only strengthen the economic, trade and investment ties between the Hong Kong Special Administrative Region (HKSAR) and RCEP member economies but also help the financial hub further integrate into the regional economy and help local companies to open up regional markets, Chan said via video link at a summit organized by Caixin on regional economic challenges and solutions. On the same day, China’s Ministry of Commerce said it supports the Hong Kong Special Administrative Region (HKSAR) to join the RCEP as early as possible.