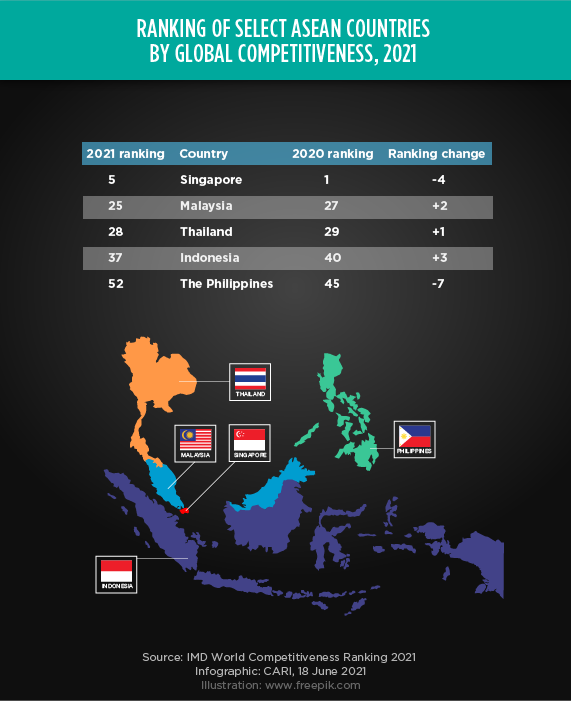 ASEAN
Singapore drops from number one spot in IMD’s 2021 World Competitiveness Ranking
(17 June 2021) Singapore fell from the number one spot to the fifth in the IMD’s World Competitiveness Ranking for 2021. The annual ranking by IMD analyzes and ranks countries according to how they manage their competencies to achieve long-term value creation. The survey looked beyond economic considerations to also consider the political, social, and cultural dimensions. The international ranking looks at 64 economies, and found that factors including investment in innovation, digitalization, welfare benefits and political leadership resulting in social cohesion helped certain economies better weather the pandemic, allowing them to rank higher in competitiveness. The ASEAN country with the largest gain was Indonesia, which jumped three spots from 40 to 37. Meanwhile, the Philippines saw the largest drop, from 45 to 52 (a seven point drop).

INDONESIA
Indonesian rupiah falls to one-month low due to rising COVID-19 cases and hawkish move by US Fed
(17 June 2021) Indonesia’s rupiah fell by 0.7% to its lowest level in nearly a month due to both rising COVID-19 cases and a surprise hawkish turn by the US Federal Reserve. The central bank of Indonesia, which had cut rates by 150 basis points and injected over US$57 billion worth of liquidity since 2020, left rates unchanged at 3.50% and pledged to further strengthen measures to stabilise the rupiah. A surprise announcement by the US Federal Reserve signalling it would raise interest rates earlier than expected and consider tapering bond buying caused the US Dollar to hit a two-month high, and is also expected to have deprecionary pressure on the Indonesian rupiah. The Indonesian central bank has limited room to ease policy further due to ‘emergent macro-stability risks’.

SINGAPORE
Singapore central bank launches media campaign warning young consumers of BNPL services
(15 June 2021) Singapore’s central bank, the Monetary Authority of Singapore, has launched a media campaign to warn young consumers of the dangers of ‘Buy Now, Pay Later’ (or BNPL) services. BNPL services allow consumers to purchase products and pay through monthly installments without interest fees. The COVID-19 pandemic has helped accelerate the adoption of BNPL services by forcing consumers and businesses online, as well as by creating more uncertainty for people’s incomes and budgets. Southeast Asian technology giants have also began offering BNPL services within Southeast Asia, such as Grab Holdings Inc and Traveloka Indonesia PT. However, 27% of Singaporeans stated they were financially worse off due to BNPL purchases, according to a 2020 report from financial comparison platform Finder. The Singaporean central bank stated they will consider future regulations on the industry such as verifying BNPL users’ incomes and creating a centralized system to check on advances taken between credit cards and BNPL platforms.

SINGAPORE
The IMF has slashed its 2021 growth forecast for the Philippines to 5.4% from 6.9%
(16 June 2021) The IMF slashed its 2021 growth projections for the Philippines from 6.9% to 5.4% due to a recent reimposition of COVID-19-related restrictions, but expects a sharper rebound in 2022 should these restrictions be lifted sooner than expected. The Philippines economy contracted by 9.6% in 2020, and shrank by 4.2% in the first quarter of 2021. The IMF expects the country’s economy to expand by 7% in 2022, from a previous estimate of 6.5%. A resurgence of COVID-19 cases and potential delays in its vaccination rollout will post downside risks to the IMF’s outlook. A new surge of COVID-19 cases in March 2021 pushed the government to reimpose strict restriction measures to contain the virus. Although the capital has begun to ease restrictions, other provinces are still battling surges.

THAILAND
Thailand plans to reopen borders to foreign tourists within 120 days
(16 June 2021) On 16 June 2021, the Thai Prime Minister announced that Thailand will reopen its borders to international tourists within 120 days, placing the country’s reopening sometime in October 2021. The Prime Minister also called upon key tourist destinations to reopen sooner if they are ready, and that travellers who are already vaccinated should be exempt from quarantine. This would also apply to Thais who have been vaccinated, travel abroad and then return home. The Thai government is currently coordinating with six vaccine producers, including Pfizer, Moderna, AstraZeneca, Sinovac and Sinopharm, and that it has secured 105.5 million doses of COVID-19 vaccines to be delivered within this year.

MALAYSIA
Malaysian poverty rate spiked to 8.4% in 2020 due to COVID-19 pandemic
(17 June 2020) Malaysia’s poverty rate spiked to 8.4% in 2020 due to the COVID-19 pandemic, a rise from 5.6% in 2019. The pandemic had caused disruptions to people’s incomes, leading to more households being exposed to poverty. This was especially the case for people in the B40 and most vulnerable groups. The Economic Affairs Minister noted that despite the poverty rates being relatively low across all ethnic groups, it remained a persistent issue, as well as instances of inequality and multidimensional poverty involving non-income aspects such as access to healthcare, education and basic amenities. The biggest factors hindering the government’s goal of eradicating poverty by 2030 include malnutrition, the increasing burden of healthcare, the digital divide, inequality, environmental concerns and inclusive development.

VIET NAM
Viet Nam imposes anti-dumping levy of 47.64% on some sugar products from Thailand
(16 June 2021) According to Viet Nam’s Ministry of Industry and Trade, Viet Nam imposed an anti-dumping levy of 47.64% on some sugar products from Thailand for five years to replace a temporary tax introduced in February 2021. The decision came after an anti-dumping investigation by the ministry which had started in September 2020, and which found that subsidised sugar shipments from Thailand surged 330.4% to 1.3 million tonnes in 2020, and that the imports were undermining the domestic sugar industry. The ministry had temporarily imposed a 33.88% levy on Thai sugar in February. Thailand’s vice commerce minister responded by stating that the Thai government would request their Vietnamese counterparts to open a new investigation to review the measures in 2022.

JAPAN, VIET NAM
Japan ships one million AstraZeneca vaccines to Viet Nam to help latter battle new infections
(15 June 2021) Japan shipped one million AstraZeneca vaccines to Viet Nam on 16 June 2021, as the latter steps up vaccine procurements to battle new infections. Japan is also considering additional shipments of vaccine donations to Viet Nam and Taiwan, and plans similar shipments to Indonesia, Malaysia, the Philippines and Thailand from early July 2021. Japan had pledged US$1 billion and 30 million doses to the COVAX facility which provides vaccines for needy countries. But the shipments to Vietnam, Taiwan and other Asian neighbours are being made outside of COVAX to speed up delivery.

SOUTH KOREA
Ebay plans to sell its South Korean unit to local consortium seeking to compete with e-commerce giant Coupang
(18 June 2021) Ebay plans to sell its South Korean unit to a local consortium composed of South Korea’s biggest bricks-and-mortar retailer E-Mart and internet group Naver. The consortium plan to purchase a 80% stake in Ebay Korea for US$3.1 billion. It is believed the purchase will help the consortium to overtake e-commerce giant Coupang, which is currently the biggest player in South Korea’s e-commerce market. Ebay Korea was the country’s third-largest e-commerce company in 2020, with a 13% market share. It is forecasted that South Korea’s e-commerce industry will expand by 11% in 2021 to US$116 billion. Coupang and Naver currently control a 19% and 14% share in the market in terms of transaction volume, respectively. South Korea is one of the fastest growing e-commerce markets in the world, driven by its tech-savvy population, high-speed internet infrastructure and densely populated environment.