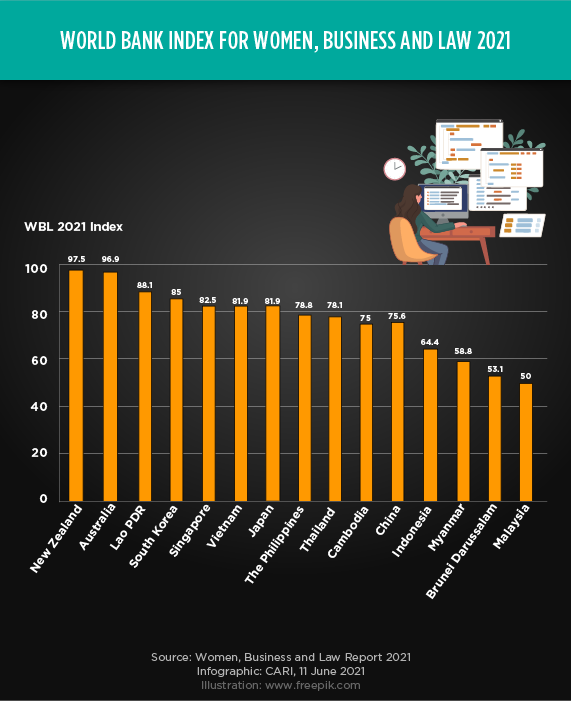 RCEP/ ASEAN
New Zealand top World Bank’s Women, Business and the Law 2021 (WBL 2021) Index amongst RCEP countries; Laos top in ASEAN
(2021) Amidst a global pandemic that threatens progress toward gender equality, World Bank’s Women, Business and the Law 2021 identifies barriers to women’s economic participation and encourages reform of discriminatory laws. Women, Business and the Law 2021 measures the laws and regulations that affect women’s economic opportunity in 190 economies using eight indicators structured around women’s interactions with the law as they move through their careers: Mobility, Workplace, Pay, Marriage, Parenthood, Entrepreneurship, Assets, and Pension. By region, OECD high-income economies score the highest, followed by Europe and Central Asia, Latin America and the Caribbean, and East Asia and the Pacific. Economies in Sub-Saharan Africa have an average regional score of 71, while economies in South Asia score 63.7. Economies in the Middle East and North Africa have the lowest average score, 51.5. New Zealand obtained the highest WBL 2021 score amongst RCEP countries at 97.5 points. Amongst ASEAN countries, Lao PDR emerged as the top scorer, obtaining 88.1. Malaysia scored the lowest amongst both RCEP and ASEAN countries at 50 index points.

CAMBODIA
Future of Cambodia’s only oil-producing company uncertain amidst liquidation of the parent company in Singapore
(7 June 2021) In an announcement on 4 June, Singapore-listed KrisEnergy said it was unable to pay its debts and “will proceed to liquidation.” KrisEnergy in December celebrated pumping the Southeast Asian country’s first oil from the Apsara field in Cambodia, an offshore concession also known as Block A. KrisEnergy has been under court protection from creditors since 2019 as it tried to restructure more than US$500 million in liabilities. KrisEnergy Ltd, the Apsara oil field development offshore Cambodia operator, has confirmed that all operations of its subsidiary in Cambodia, KrisEnergy (Cambodia) Ltd, will continue as normal, despite its parent company filing for liquidation on June 4. Director-General for Petroleum for the Ministry of Mines and Energy, Cheab Sour, told The Phnom Penh Post on June 8 that he would keep a lookout for further details of the court proceedings or other pertinent information concerning the company.

MALAYSIA
Austria’s AT&S picks Malaysia for PCB, IC plant, total investment RM8.5billion
(10 June 2021) AT&S, the Austria-headquartered global manufacturing leader of high-end printed circuit boards (PCB) and integrated circuit (IC) substrates, has chosen Malaysia as its first production plant in Southeast Asia. AT&S’ new facility in Kulim Hi-Tech Park, Kedah involved a proposed total investment of RM8.5 billion and would create 5,000 high-tech and high impact jobs, Senior Minister and International Trade and Industry Minister Datuk Seri Mohamed Azmin Ali said. Construction of the facility is scheduled to begin in the second half of 2021 with commercial operations targeted to come on stream in 2024. Besides the manufacturing of high-tech products, a significant amount of R&D activities will be executed at this new location.

SINGAPORE
UOB becomes the first bank in Singapore to pilot digital signature authorisation
(11 June 2021) United Overseas Bank Limited (UOB) has announced on 10 June that it will pilot the use of GovTech’s Sign with Singpass to confirm transactions or product applications using its customers’ digital signatures. The bank will test its digital initiative through an initial 12-month pilot with some of its retail and corporate customers. The pilot will cover forms for individual wealth planning services and the PayNow Corporate application. Following the 12-month pilot period, UOB says it aims to expand the use of Sign with Singpass to more products and services for both the retail and wholesale segments in Singapore.

THE PHILIPPINES
Philippines external trade doubled in April 2021 compared to 2020
(11 June 2021) Total merchandise trade between the Philippines and the rest of the world more than doubled in April to US$14.16 billion from 2020, with both exports and imports posting substantial growth. The latest data from the Philippine Statistics Authority (PSA) showed that total external trade jumped 107.5% in April from US$6.83 billion in the same month in 2020. In a report, ING’s senior Philippine economist Nicholas Mapa attributed the export gains to the resumption of regional manufacturing operations. The PSA earlier reported that the volume of production index, a proxy for factory output, also reverted to growth of 162.% year-on-year in April 2021. The Development Budget Coordination Committee expects goods exports to grow 8% this year, while imports were projected to rise by 12%.

THAILAND
Thailand targets 3 million foreign tourists this year under phased COVID-19 reopening
(9 June 2021) Tourism-reliant Thailand expects about 3 million foreign tourist arrivals this year, tied to a phased reopening to vaccinated visitors later this year, the state tourism agency said on 9 June. Thailand, which launched its mass vaccination campaign on 7 June, will allow inoculated foreign tourists to visit Phuket Island without a quarantine next month in a pilot scheme before reopening nine other provinces in October after a year of tight entry restrictions. Most of the 3 million arrivals are expected in the final quarter, with spending estimated at between 240 billion baht to 300 billion baht (US$7.7 billion to US$9.6 billion), Siripakorn Cheawsamoot, Deputy Governor of Tourism Authority of Thailand, told Reuters.

AUSTRALIA/SINGAPORE
Singapore and Australia working to pilot travel bubble; starting with students
(11 June 2021) Singapore and Australia will work towards an air travel bubble and both nations will lay the groundwork for resuming two-way travel in a safe and calibrated manner, said the prime ministers of both countries on June 10. Officials from both sides are now at work discussing the air travel bubble. This includes talking about mutually recognising health and vaccination certificates and preparing the pre-conditions and infrastructure for such an arrangement, said Prime Minister Lee Hsien Loong. “Before Covid-19, many Singaporeans travelled to Australia for business, for holidays and to pursue their education and vice versa. We need to resume these people-to-people flows to maintain our close and excellent bilateral relationship,” he said.

CHINA
China passes law to counter foreign sanctions from US and EU
(10 June 2021) China National People’s Congress standing committee (NPC) has passed a law to counter foreign sanctions, as it strives to diffuse pressure from the United States and the European Union over trade, technology, Hong Kong and Xinjiang. The new law is China’s latest and most wide-ranging legal tool to respond to foreign sanctions and local experts say it is intended to give Chinese retaliatory measures more legitimacy and predictability. The law built on earlier measures unveiled by China’s commerce ministry in January. The January “blocking statutes” prohibited Chinese companies and individuals from complying with foreign government sanctions that targeted China.

NEW ZEALAND
New Zealand completes ‘marathon’ overseas investment reform
(10 June 2021) New Zealand’s Overseas Investment Amendment Act 2021, intended to amend the Overseas Investment Act 2005, received Royal Assent on 24 May 2021. The earliest changes will come into force on 5 July 2021. The changes will remove the need for consent from the Overseas Investment Office (OIO) for lower risk transactions, have a better management system for higher-risk transactions and assets of significance to New Zealanders, and will simplify application requirements for overseas investors. Under the new rules, overseas investors will no longer have to obtain consent for incremental ownership increases except where the incremental increase results in an overseas investor meeting or exceeding the 25%, 50%, 75% or 100% ownership or control threshold of significant business assets or sensitive land.