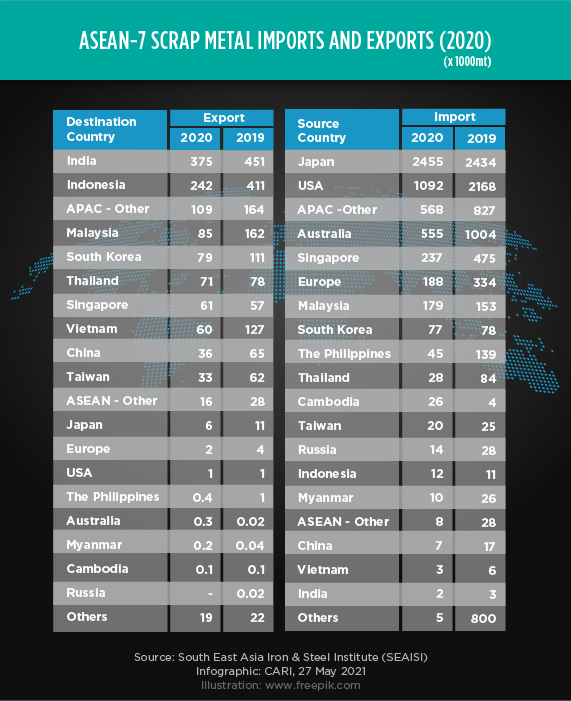 ASEAN
Scrap demand may exceed supply in ASEAN countries in 2021
(20 May 2021) ASEAN-7 countries exported about 1.20 million MT of ferrous scrap in 2020, which saw a decrease of 46.8% from 1.75 million MT of the same period in 2019. The top 3 exporting countries were Singapore, Malaysia and Thailand. 31.4% of the export has gone to India and 20.3 % to Indonesia. Other smaller countries in the APAC and ASEAN too have sourced the material for their steelmaking facilities due to their limited domestic scrap availability. The 2020 SEAISI Steel Statistical Yearbook noted that the local generation of ferrous scrap in the ASEAN-7 region is enough only to feed about half to its local requirements. All of the countries do not have enough supply of local ferrous scrap to meet the demand and therefore need to source the critical materials from outside of the region. Steel mills in the region will go back into full swing in their operations in the coming months to meet past established and new market requirements. And with more planned capacities to kick off after a long delay, sourcing the raw material ferrous scrap is expected to be very competitive. An external factor that drives this trend is China’s policy for a cleaner environment, which encourages the setting up of more electric arc furnaces (EAF) and fewer blast furnaces / basic oxygen furnaces (BF/BOF) investments and this will increase the demand for ferrous scrap. ASEAN-7 steelmakers maintained their utilisation rates last year and are expected to do the same for this year as economic activities are returning to the level seen before the pandemic. With ferrous scrap being such an important raw material for the production of iron and steel, there are concerns that demand may outstrip supply.

INDONESIA
Indonesia says it is building a US$1.2 billion battery plant with South Korea’s LG
(24 May 2021) State-owned Indonesia Battery Corporation (IBC) and South Korea’s LG will build a new battery plant worth US$1.2 billion with the capacity of 10-gigawatt hours (GWh), Indonesia’s Investment Minister, Bahlil Lahadalia, said on 24 May. “The first phase of construction will have a production capacity of 10 GWh, which will later be used for electric vehicles (EVs) from Hyundai ” he added. The plant, part of a bigger US$9.8 billion EV deal between LG and Indonesia signed last year, will be built in the city of Bekasi, on the eastern border of the capital Jakarta. Indonesia is targeting to produce 140 GWh worth of batteries by 2030, officials have said.

MALAYSIA, SINGAPORE
Chinese corporates view Singapore and Malaysia as top destinations for growth opportunities in ASEAN, says Standard Chartered
(27 May 2021) The majority of Chinese companies focusing on ASEAN expect to see their businesses grow in the region over the next 12 months, according to a survey commissioned by Standard Chartered. The Borderless Business: China-Asean Corridor report explores potential opportunities for cross-border growth between both regions. The survey, which was conducted in April among senior executives at 43 China-based companies, revealed that the same companies consider Singapore and Malaysia as the best markets for expansion opportunities in ASEAN. 60% of respondents from the survey indicated that they are focusing on expanding in Singapore to capture sales and production opportunities, second to Malaysia at 65%, and followed by Thailand’s 53%. Around 47% of Chinese corporates are also keen to tap into Singapore as a major regional procurement hub, and 44% of the same companies indicate that they are looking to build a regional research and development (R&D) or innovation centre in the country as they look to expand across ASEAN. In addition, 47% of the respondents agreed that the network of Free Trade Agreements (FTA) makes Asean the ideal base to access the global markets.

THAILAND
Thailand plans more economic measures to cope with COVID-19 impact
(27 May 2021) Thailand plans additional measures to retain jobs and boost domestic consumption in a bid to help the Southeast Asian economy weather its most severe COVID-19 outbreak so far, the state planning agency said on 27 May. The tourism-reliant nation is struggling with the third wave of infections which have accounted for more than 80% of its total cases and deaths. “We need to have enough oxygen for the business sector to get going… and to sustain consumption at normal levels,” Danucha Pichayanan, head of the National Economic and Social Development Council, told a seminar. Thailand’s tourism might not normalise until 2026, affecting over 7 million workers, as the country’s jobless rate hit a 12-year high in the first quarter. The measures being prepared to include one to retain jobs at smaller firms and assistance for tourism, which has been hit by the outbreak. The new measures would be financed by new borrowing of 500 billion baht (US$16 billion), which was approved by the king earlier this week, Danucha said.

SINGAPORE
Tech invasion of Singapore offices, chipping away at the dominance of banks in the island-state’s central business district
(28 May 2021) In the financial mecca of Singapore, a new crowd is flocking to its offices: technology companies. The financial industry used to be the main driver of office demand in Singapore, taking up almost half of new space between 2004 and 2014. That share plunged to 26% between 2015 and 2020, according to estimates by real estate consultancy firm Jones Lang LaSalle Inc. Over the same period, the portion obtained by tech firms almost tripled to 22%. According to Alan Miyasaki, head of Asia real estate acquisitions at Blackstone Group Inc, financial firms were forced to trim workspace because of the pandemic but that vacancy was snapped up quickly because there were a lot of these technology firms coming in to take over vacancies.” Easy access to funding for tech firms including startups makes Singapore an appealing destination. And to draw top global talent, the government last November launched a program providing a two-year visa for tech entrepreneurs and investors. Rents in Singapore are showing signs of recovery after slumping during the pandemic-induced recession. The office rental index climbed 3.3% in the first three months of 2021, the first gain in seven quarters, according to Urban Redevelopment Authority data.

THE PHILIPPINES
Nokia wins 5G deal with DITO in the Philippines
(26 May 2021) Nokia announced that it has been selected by DITO Telecommunity Corporation (DITO) to deploy 5G services on the island of Mindanao in the Philippines. The deployment will enable DITO to complete its ambitious strategy of building a high-quality 5G network throughout the country, which formally launched in May 2021. To achieve the desired network performance, Nokia is providing equipment from its comprehensive massive MIMO, multi-band, Single RAN AirScale portfolio to build the Radio Access Network (RAN) for the 5G infrastructure across Mindanao, the Philippines’ second largest island. DITO also utilized Nokia’s NetAct solution for network management and seamless daily network operations, including configuration management, monitoring, and software management. Nokia has been an existing 4G LTE radio partner since 2020. DITO, a joint venture between Udenna Group and China Telecom, is the newest telecommunications provider in the Philippines and is pursuing a strategy of creating a new network in the country.

CHINA
China boosts support for businesses as commodity prices surge
(27 May 2021) The global surge in commodity prices is adding another burden to China’s small businesses, many of which have barely put the coronavirus pandemic behind them. In a sign of how severe the problem is, Chinese Premier Li Keqiang and other leaders emphasized at a meeting on 26 May that they would increase support for privately run businesses: first, in the persistent issue of getting financing, and second, in coping with rising prices of raw materials. The statement marked the latest central government announcement in the last few weeks on record-high commodity prices, as authorities rush to limit the negative impact on the economy. The cost of raw materials as measured by the producer price index rose 6.8% from a year ago in April, the fastest pace in over three years. Even in China’s state-dominated economy, small, privately run businesses contribute to the majority of GDP growth, tax revenue and jobs. The meeting Wednesday of the top executive body, the State Council, noted there were a total of about 139 million small, micro-sized and individually run businesses as of the end of April.

JAPAN/SINGAPORE
Singapore and Japan renew The Bilateral Swap Arrangement (BSA) currency swap pact
(22 May 2021) Singapore and Japan renewed an agreement yesterday that allows the two countries to swap their currencies in exchange for United States dollars in times of need. The Bilateral Swap Arrangement (BSA) between the central banks of the two nations also enables Singapore to obtain Japanese yen to meet possible fund requirements, the Monetary Authority of Singapore (MAS) and the Bank of Japan said in a statement. At the onset of the coronavirus pandemic last year, the US dollar became scarce – bringing transactions in the global financial system to a virtual halt. Such temporary shortages have also marked previous episodes of instability, as the uncertainty tempts investors to hold US dollars, which dominate global trade. Under the terms of the BSA, Singapore can swap local dollars for up to US$3 billion or its equivalent in Japanese yen from Japan. Japan can swap Japanese yen for up to US$1 billion from Singapore.

SOUTH KOREA
South Korea freezes key rate at a record low of 0.5%
(28 May 2021) South Korea’s central bank yesterday froze its key interest rate at a record low as the continued Covid-19 pandemic offset the signs of economic recovery shown in recent economic indicators. Bank of Korea (BoK) governor Lee Ju-yeol and six other monetary policy board members left its benchmark seven-day repurchase rate unchanged at an all-time low of 0.50%. The BoK slashed its policy rate by 50 basis points in March 2020, before cutting it further by 25 basis points to the current level in May of the year to tackle an economic turmoil from the pandemic. Recent economic indicators showed signs of recovery from the pandemic-hit downturn, but concerns linger about the virus spread as the daily number of confirmed Covid-19 cases stayed in triple digits since November last year.