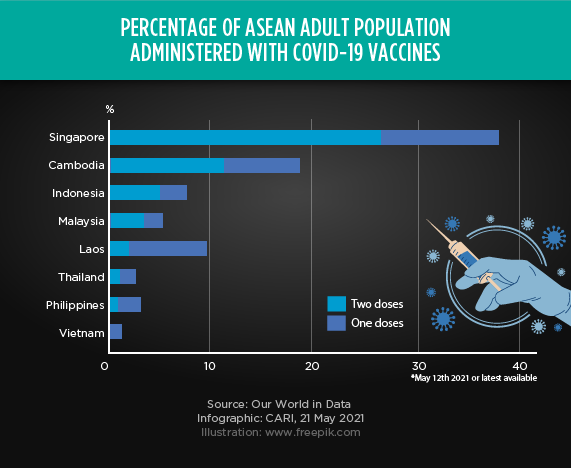 ASEAN
ASEAN nations being impacted by new wave of COVID-19
(15 May 2021) Much of Southeast Asia is being impacted by a new wave of COVID-19, with clusters having been found in areas particularly vulnerable to the spread of the virus, including hospitals, quarantine facilities and border crossings. New variants of COVID-19 which are more transmissible have also been blamed for the new outbreaks. In particular, new cases in Malaysia have more than tripled over the past month, while Thailand’s daily tally has jumped from 50 in early April to more than 2,000 a month later. Meanwhile, nearly 90% of Cambodia’s 20,000 odd recorded infections occurred since the start of April. Most countries’ outbreaks have been attributed to mass travel associated with religious or national holidays, as well as foreign travellers bringing the virus into their borders. While vaccination rates are rising within the region, with the exception of Singapore and Viet Nam less than 10% of the adult population in each country has received any COVID-19 vaccine doses.

MALAYSIA
Malaysia preparing to offer handsome tax incentives to accelerate the electric vehicle industry in the country
(19 May 2021) The Malaysian government is preparing to offer ‘handsome’ tax incentives to accelerate electric vehicle development in the country in its soon-to-be-announced accelerated EV policy under the National Automotive Policy (NAP) 2020. Under the incentives plan, fixed incentives including excise duties, import duties and sales taxes will be offered to industry players and EV car users. Higher levels of incentives will be offered to companies bringing something ‘extraordinary’ into the country. Original equipment manufacturers (OEMs) will be able to enjoy fixed incentives as well as other special incentives customized for them. Among the benefits which EV car users can enjoy will include road taxes, green parking schemes, charging installations as well as toll rebates. It is hoped that this policy will be brought to the Cabinet by June 2021 for approval, before announcing it in July.

THE PHILIPPINES
The Philippines government slashes growth projections to between 6% and 7%
(18 May 2021) The Philippines’ Development Budget Coordination Committee slashed its growth projections for 2021 to between 6% and 7%. This is down from its previous estimates of 6.5% to 7.5% growth. It also lowered its growth projections for 2022 to between 7% and 9% growth, from 8% to 10% earlier. This downgrade came after the country’s first quarter GDP contracted by more than expected at 4.2%. This has been attributed to stricter COVID-19-related curbs introduced since late March 2021 in the capital and surrounding provinces. According to a survey of economists by Bloomberg News in May 2021, the Philippines economy will expand by 5.5% in 2021, 6.5% in 2022, and 6.1% in 2023.

VIET NAM
Alibaba leading US$400 million investment deal into Vietnamese conglomerate Masan Group Corp.’s retail arm
(18 May 2021) Chinese tech giant Alibaba Group Holding Ltd and partners are investing some US$400 million into Vietnamese conglomerate Masan Group Corp.’s retail arm, thereby expanding Alibaba’s reach into the online groceries business in Southeast Asia. Alibaba and its partner Baring Private Equity Asia are leading a consortium that will take a 5.5% stake in The CrownX, which holds Masan’s interests in Masan Consumer Holdings and VinCommerce, while the conglomerate will own 80.2% of the firm following the investment. The CrownX is believed to have a pre-investment valuation of US$6.9 billion. As part of the deal, the Vietnamese retail firms will partner with Alibaba’s Southeast Asian unit Lazada to expand its digital business in the country.

JAPAN
Japan’s economy contracted by annuanalized decline of 5.1% due to resurgent COVID-19 outbreaks
(18 May 2021) Japan’s economy contracted by 1.3% in the first quarter of 2021 from the preceding quarter, or at an annualized pace of 5.1%, as resurgent COVID outbreaks snapped the run of consecutive growth after two quarters. The result compares with the annualized decline of 4.6% forecasted by 37 economists from the Japan Center for Economic Research. This larger than expected contraction was blamed on the government’s declaration of a second state of emergency for the period of January 8 to March 21. Private consumption subsequently fell by 1.4% from the previous quarter. Other factors blamed included weaker winter bonuses and government consumption levels.

NEW ZEALAND
New Zealand’s government introduces big-spending budget on 20 May aimed at stimulating economy
(20 May 2021) New Zealand’s government introduced a big-spending budget on 20 May aimed at stimulating the COVID-19-hit economy. Among the measures introduced included a US$2.4 billion boost to family benefits which would help lift 33,000 children from poverty. Extra money was also allocated for health, public transport, and education. Extra money was also earmarked for climate change mitigation, including low carbon technologies. Government debt-to-GDP is expected to expand from 26.3% in 2020 to 48% in 2023. The New Zealand Treasury estimates GDP growth of 2.9% in the 12 months to June 2021, rising to 4.4% in 2023.