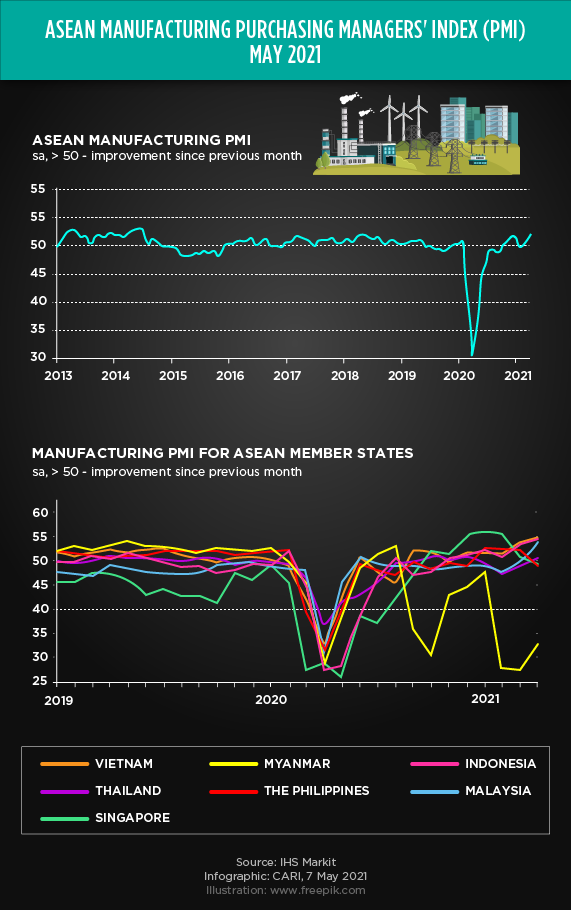 ASEAN
ASEAN manufacturing conditions picked up in April 2021
(5 May 2021) ASEAN manufacturing conditions improved at a noticeably quicker rate during April and one that was the fastest since July 2014, according to the latest IHS Markit Purchasing Managers’ Index (PMI™) data. The headline PMI posted above the neutral 50.0 mark for the second month running, rising from 50.8 in March to 51.9 in April, signalling the fastest improvement in the health of the ASEAN manufacturing sector since July 2014 and one that was moderate overall. Across the seven constituent nations, Vietnam saw the strongest growth. The headline PMI for Vietnam hit a near two-and-a-half-year high of 54.7 and signalled a sharp rate of expansion. Following closely behind was Indonesia, where the PMI hit a record high (since early-2011) of 54.6, and likewise pointed to a marked improvement in overall manufacturing conditions. Growth was also recorded in Malaysia, where the headline index climbed above the neutral 50.0 mark for the first time in ten months. Thailand likewise saw a return to expansion during April. The headline PMI (50.7) was indicative of only a mild rate of growth. Elsewhere, both Singapore and the Philippines registered renewed contractions during April. For the former, the headline index (49.5) signalled the first deterioration in conditions since last September, but only a fractional one. In the Philippines, the contraction was the first in four months and, though marginal, was the fastest since October 2020 (index at 49.0). Finally, Myanmar again registered the steepest downturn of the seven monitored nations, as ongoing factory closures amid political instability continued to heavily impact the manufacturing sector. The PMI did rise to a three-month high of 33.0 but was nonetheless indicative of a substantial contraction.p;

INDONESIA
Indonesia aims for V-Shaped recovery after disappointing GDP in Quarter 1, 2021
(5 May 2021) Indonesia is setting its sights on a sharp turnaround starting this quarter as it assembles more stimulus programs to lift stubbornly weak domestic demand. GDP declined 0.74% in the first quarter from a year ago, the Indonesian statistics bureau said on 5 May 2021, worse than the median estimate of -0.65% in a Bloomberg survey of economists. Still, it represented an improvement from the 2.19% contraction in the final quarter of 2020. Southeast Asia’s largest economy should return to growth this quarter as the government readies tax and sales measures to support the retail sector, Coordinating Minister for Economic Affairs Airlangga Hartarto said in a briefing. “The trend of economic recovery is toward positive growth,” Hartarto said. “The curve is V-shaped, as seen in many other countries.” According to Bloomberg, the Indonesian GDP is expected to expand 6.9%-7.8% in the second-quarter period, a pace that would be its fastest since 2008. The country’s benchmark stock index pared the day’s gains to 0.2% after the GDP data were released. The rupiah was little changed at 14,435 to the dollar.

MALAYSIA
KLCI succumbed to selling pressure, but higher crude palm oil prices despite Movement Control Order (MCO 3.0) concerns
(5-6 May 2021) The FBM KLCI extended losses for the fourth consecutive session today, as most of the key index’s components succumbed to selling pressure amid news of the reimplementation of the Movement Control Order or MCO 3.0 in parts of Selangor, Johor Bahru and Kuala Lumpur. At 5 pm of 5 May 2021, the local benchmark index closed 12.58 points or 0.79% lower at 1,575.67. Market breadth was negative as losers surpassed gainers, at 810 vs 297 gainers, while 419 counters were unchanged. Total volume fell to 7.37 billion shares worth RM4.24 billion from 7.48 billion shares worth RM4.13 billion. In contrast, Bursa’ Energy Index rose 1.14% to 907.89. The Telecommunication and Media Index was steady, closing 0.01 points higher at 715.42. The Malaysian crude palm oil (CPO) prices also climbed to a level near RM4,700 a tonne in morning trade on Bursa Malaysia on 6 May 2021 as prices of commodities including crude oil and copper strengthened on economic recovery bets despite lingering Covid-19 pandemic concerns. Globally, it was reported that Asian shares rose today and commodity prices held near multi-year highs as investors switched to cyclical amid hopes of a strong economic recovery.

THE PHILIPPINES
Monde Nissin to raise US$1 billion in Philippines’ biggest IPO
(6 May 2021) The producer of the Southeast Asian country’s best-selling instant noodle brand Lucky Me! is selling 3.6 billion shares at 13.50 pesos (US$0.67) per share for its initial public offering, it said in a letter to the local stock exchange. That is lower than the 17.50 pesos (US$0.87) maximum price indicated in its IPO filing. At 48.6 billion pesos (US$1 billion), Monde Nissin’s offering will be the biggest on record in the country. Monde Nissin’s shares are expected to begin trading on June 7, according to an earlier prospectus. According to its website, Monde Nissin makes crackers, muffins and biscuits, and has a presence in more than 30 countries. Monde Nissin plans to use the IPO proceeds for purposes including loan repayment and general corporate use, according to an earlier filing.

SINGAPORE
Singapore Press Holdings (SPH) restructuring amid falling revenue sparks questions over future of journalism
(6 May 2021) The publisher of Singapore newspaper The Straits Times billed a plan on 6 May 2021 to spin off its media business into a non-profit entity, but observers are pessimistic that the move due to concerns that the move will alter the country’s state of press freedom. Singapore Press Holdings (SPH) will transfer its media business into a not-for-profit entity amid the ongoing challenge of falling advertising revenue. The restructuring exercise involves transferring the entire media-related business of SPH to a newly incorporated wholly-owned subsidiary, SPH Media Holdings. Singapore Press Holdings (SPH), one of Asia’s biggest media groups, said its new ownership structure would be similar to the likes of Britain’s The Guardian and The Tampa Bay Times in the US, both of which are owned by non-profit entities. Local observers noted that organisations such as The Guardian, owned by the Scott Trust Limited, were able to preserve editorial independence through firewalls erected between funders and newsrooms. SPH has for decades enjoyed a near-monopoly in newspaper publication because of strict licensing rules. While it is publicly listed, state-linked entities hold management shares that are crucial to determining editorial appointments.

THAILAND
Bank of Thailand leaves rate at a record low, warns of Covid risk
(5 May 2021) The central bank left its key interest rate unchanged at a record low of 0.50% on Wednesday, preserving its limited ammunition as the economy struggles with the third wave of coronavirus infections. The Bank of Thailand’s (BoT) Monetary Policy Committee voted unanimously to keep the one-day repurchase rate unchanged for an eighth straight meeting. “Economic growth is likely to sharply slow due to the third Covid-19 wave,” the central bank said in a statement. Monetary policy will remain accommodative to support economic activity, the BoT said. The bank reiterated that the limited policy room should be preserved to be used at the most effective time.

SOUTH KOREA, CHINA, VIETNAM
US hydrogen company Plug Power partnered with South Korea’s SK Group, eyes China and Vietnam
(5 May 2021) U.S. hydrogen fuel cell maker Plug Power, which counts Walmart and Amazon as its clients, is planning to expand its businesses in China, Vietnam and South Korea, through a joint venture with conglomerate SK Group. Earlier this year, South Korea’s SK made a US$1.6 billion investment in the Nasdaq-listed company. Through the joint venture, the two companies are planning to set up a factory in South Korea by 2023 to produce fuel cells and electrolyzers that extract “green hydrogen” from water using renewable energy. Such products would be used “especially in South Korea, but we also believe, based on SK’s partnerships, in China and Vietnam,” Andrew Marsh, president and CEO of Plug Power, told Nikkei Asia in a recent interview. Asian governments are starting to focus on the development of hydrogen as a green energy source. Particularly in South Korea and Japan, government commitments and public pressure to cut greenhouse gas emissions have led to a surge of interest in hydrogen, which does not emit carbon dioxide when burnt.

SOUTH KOREA
South Korea Earmarks US$700 Million for Climate and ICT Projects through co-financing with ADB, half to be used to co-finance projects under ASEAN Catalytic Green Finance Facility (ACGF)
(4 May 2021) The Asian Development Bank (ADB) and the Republic of Korea today signed a memorandum of understanding earmarking US$700 million in co-financing from the Republic of Korea for ADB sovereign development projects over the next 3 years. Deputy Prime Minister, Minister of Economy and Finance, and ADB Governor Hong Nam-Ki signed for the Republic of Korea, while President Masatsugu Asakawa signed for ADB. Half of the earmarked amount of US$350 million will co-finance projects through the Association of Southeast Asian Nations (ASEAN) Catalytic Green Finance Facility (ACGF), established in 2019 by ASEAN governments under the ASEAN Infrastructure Fund and managed by ADB. ACGF projects co-financed by the Republic of Korea will help governments in Southeast Asia implement infrastructure projects that promote environmental sustainability, including ocean health, and contribute to climate change goals.