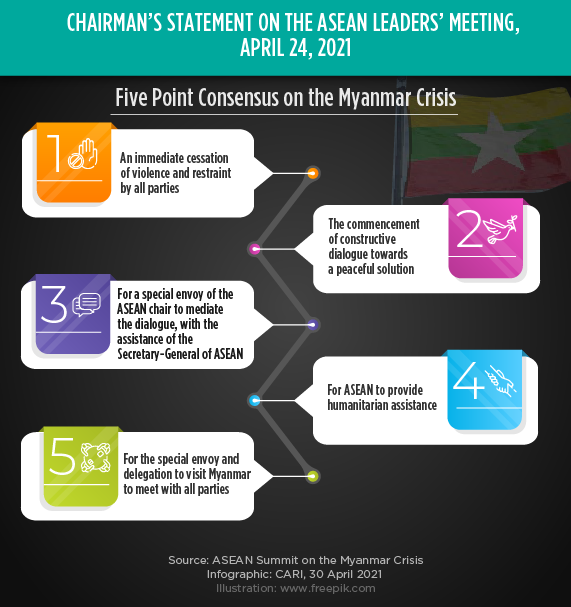 ASEAN
Myanmar junta states immediate priority is law and order after ASEAN calls for end of violence
(24 April 2021) A summit held by ASEAN in Jakarta on 24 April 2021 regarding the ongoing crisis in Myanmar released a statement with five points: an immediate cessation of violence and restraint by all parties, the commencement of constructive dialogue towards a peaceful solution, for a special envoy of the ASEAN chair to mediate the dialogue, for ASEAN to provide humanitarian assistance, and for the special envoy and delegation to visit Myanmar to meet with all parties. The summit was attended by the head of Myanmar’s junta, Senior General Min Aung Hlaing, as well as the leaders and foreign ministers of the other ASEAN Member States. After the ASEAN meeting, a statement was posted on a Vietnamese government portal which stated that the Vietnamese prime minister had asked ASEAN countries to work closely with Vietnam at United Nations forums towards “finding suitable solutions for Myanmar.” Viet Nam is currently serving as a non-permanent member of the United Nations Security Council. However, the violence in Myanmar remains ongoing, with the military junta subsequently stating after the summit that their immediate priority would be on maintaining ‘law and order’.

INDONESIA
Indonesian government looks to cut its budget deficit for 2022 state budget
(29 April 2021) Indonesia’s 2022 state budget could be smaller than its 2021 budget as the government looks to cut its budget deficit and reduce pandemic-era fiscal support. Indonesia had relaxed its fiscal rules for three years from 2020 to allow for more government spending amid the COVID-19 pandemic, but vowed to bring its fiscal deficits back to under the legal limit of 3% of GDP starting in 2023. Indonesia’s Finance Minister stated that the government would be preparing its 2022 budget within a range of US$182 billion to US$192 billion, with a deficit outlook of 4.51% to 4.85%. The 2021 budget has an estimated shortfall of 5.7%, while 2020’s budget had a fiscal gap of 6.1%, the country’s biggest in decades. Indonesia’s economy contracted by 2.07% in 2020, and the government expects a rebound of 4.5% to 5.3% growth in 2021.

MALAYSIA
Malaysian exports grew by 31% in March 2021 from year earlier
(28 April 2021) Malaysia’s exports grew by 31% in March 2021 from a year earlier, the country’s largest year-on-year expansion in nearly four years. This boost in exports was fueled by higher global demand for electrical and electronic (E&E) products, mainly semiconductors used in 5G technology and high-performance computing, as well as rubber products. Imports also saw its highest growth since October 2017, rising 19.2%. Total trade expanded by 25.6%, while the country’s trade surplus grew by 96.1%. According to Malaysia’s International Trade and Industry Minister, the country’s trade, exports, imports and trade surplus recorded double-digit growth for two consecutive months in March 2021. For the first quarter of 2021 as a whole, total trade grew 14.8% year-on-year to MYR 505.65 billion. MIDF Research subsequently revised upwards its 2021 exports and imports forecast to 13.5% and 12.7% year-on-year respectively, from the earlier estimation of 8.1% and 8.7%.

SINGAPORE, THAILAND
Thailand and Singapore link up real-time payment systems in world’s first of its kind
(29 April 2021) Singapore’s PayNow and Thailand’s Promptpay have become linked, allowing the users of both real time payment systems to transfer money across both countries using just a mobile phone number. This was revealed in a joint statement by the Monetary Authority of Singapore (MAS) and the Bank of Thailand (BOT), which stated that the link is the first of its kind in the world, and came about after several years of extensive collaboration between the two sides. Users will be able to transfer up to $1,000 Singapore dollars (US$750) or 25,000 Thai baht (US$800) daily between the countries. The managing director of MAS stated that their overall objective was to work with their counterparts in other ASEAN Member States to form a network of linked retail-time payment systems across the region.

THAILAND
Thailand to increase mandatory quarantine period for all travellers to two weeks due to rising cases
(29 April 2021) The Thai government has increased its mandatory quarantine period for all travellers to two weeks, as the country grapples with its latest COVID-19 wave. These new restrictions were announced on 29 April 2021, and are expected to be a setback to the country’s previous plans to reopen its borders to foreign tourists. Thailand had earlier in April 2021 reduced the timeframe to seven days for vaccinated tourists and ten days for most others in a bid to boost its tourism sector. All visitors to the country starting on 1 May 2021 will be required to undergo the longer isolation. The new restrictions also include a mask mandate, a ban on large gatherings, and a shutdown on bars. On the same day as the announcement, the Finance Ministry cut its economic growth forecast for Thailand to 2.3% for 2021, citing the current outbreak and the latest downward revision of international visitors to just 2 million in 2021, down from an earlier estimate of 5 million.

THE PHILIPPINES
Philippines targeting foreign investments with Singapore-style tax laws
(27 April 2021) The Philippines introduced a Singapore-style tax law which reduces corporate income taxes in order to boost foreign investments into the country. The so-called corporate recovery and tax incentives for enterprises (CREATE) act, which was signed into law in February 2021, aims to provide financial relief to companies in need while increasing the country’s competitiveness within the region. The law reduces the corporate income tax to 25% for large companies and 20% for small businesses, unifies the government’s inbound investment program, and grants the president more power to give non-fiscal incentives to businesses. The government stated the plans will  return cash to distressed small- and medium-sized businesses, which they can then reinvest in jobs and economic growth.

THE PHILIPPINES
Nearly half of more than 60 online casinos in the Philippines have permanently shut down due to coronavirus restrictions
(28 April 2021) The Philippines’ gaming agency chief stated that about half of the country’s more than 60 online casinos have permanently shut down due to coronavirus restrictions, affecting as many as 30,000 foreign workers.  Revenue from online casinos, which cater mostly to Chinese clients, is expected to be less than half of the usual earnings of 8 billion to 9 billion pesos for 2021. Manpower has been identified as an issue, as Chinese nationals can’t go to the Philippines to place bets, and workers who had left the country for Chinese New Year in 2021 are not able to return because of the lockdown. It is believed that some operators will transfer their operations to Vietnam, Myanmar and Malaysia, while bigger online casinos may return to the Philippines once travel restrictions are eased and there’s clarity on proposals to tax the industry.

JAPAN
Japan’s parliament approves Regional Comprehensive Economic Partnership
(28 April 2021) On 28 April 2021, the Japanese parliament approved the Regional Comprehensive Economic Partnership (RCEP), raising the possibility for the pact to enter into force later in 2021. RCEP will be Japan’s first trade deal involving both China and South Korea, their largest and third biggest trade partners respectively. As of 28 April 2021, Singapore and China have completed procedures for ratification. The Japanese government expects the trade agreement to boost Japan’s GDP by 2.7% and create 570,000 jobs. The deal will eliminate tariffs on 91% of goods and introduce common rules on investment and intellectual property to promote free trade.

JAPAN
Japan targets Viet Nam as first Southeast Asian country for oil sharing deal
(27 April 2021) Japan aims to bring Viet Nam into what will be its first oil-sharing deal with a Southeast Asian country, as Japan seeks to ensure an uninterrupted supply of petroleum in the event of a disruption. Under one proposal, each participant in the agreement would build up individual reserves of crude oil, along with gasoline, diesel fuel and other petroleum products, to prepare for possible future disruptions in supplies. The Japanese government has so far approached Viet Nam with the oil-sharing proposal. Once the pandemic has eased, Japan aims to begin active discussions with Hanoi with the goal of reaching an agreement at an early date. Japan also plans to build oil-sharing arrangements with several other ASEAN Member States, including Indonesia, Thailand, and Malaysia.