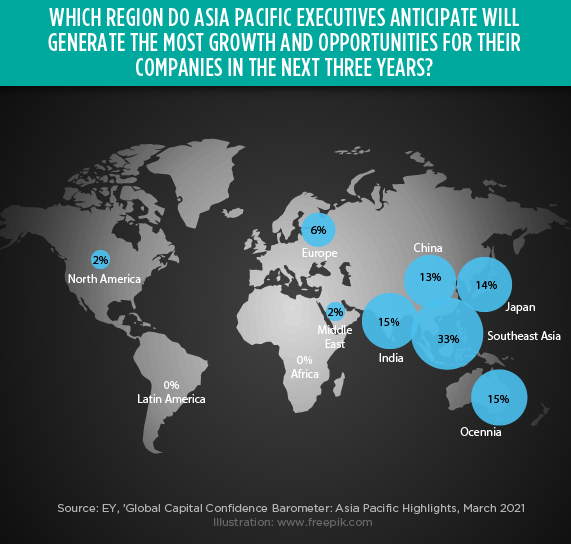 ASEAN
56% of executives in Southeast Asia looking to pursue M&A over coming year
(20 April 2021) According to consultancy firm EY’s latest Global Capital Confidence Barometer survey, some 56% of executives in Southeast Asia surveyed are looking to actively pursue mergers and acquisitions (M&A) over the next 12 months, the highest proportion since 2012, and also higher than the the 11-year average of 44% in past surveys. When looking at the responses of Asia Pacific C-suite executives in general, some 33% anticipate Southeast Asia would generate the most growth and opportunities for their companies in the next three years, followed by India (15%) and Oceania (15%). From an M&A standpoint, the sectors identified as significant in terms of value included real estate, energy and infrastructure, consumer — including core consumer, education, healthcare and consumer finance — and technology. In 2020, the region saw 329 M&A deals valued at US$51.45 billion, a decline of 24.4% year on year in terms of value, as well as 19.2% year-on-year in volume.

MALAYSIA
Malaysia first country to sell dollar denominated sukuk linked to sustainability activities
(21 April 2021) Malaysia became the first country to sell US dollar denominated sukuk linked to sustainability activities, adding to a growing number of issuers which have turned to debt financing for environmental and social projects. Malaysia issued 10-year sustainability sukuk notes priced at US$800 million, as well as 30-year notes priced at US$500 million. The offerings were oversubscribed by 6.4 times. Overall sustainable debt issuance rose by 29% in 2020 to a record US$732 billion, according to figures compiled by Bloomberg. The last time Malaysia issued dollar-denominated debt was in 2016, with its existing U.S. currency notes having a longer duration than Asian credit more broadly, making them vulnerable to a selloff last quarter as yields spiked.

MALAYSIA
Malaysia’s labour market expected to grow marginally in 2021 due to vaccination rollout and fiscal measures
(22 April 2021) According to Malaysia’s Department of Statistics Malaysia (DOSM), the country’s labour market is expected to grow marginally in 2021 due in part to the vaccination rollout and government support for businesses. Malaysia’s unemployment rate rose to 4.5% in 2020, up from 3.3% in 2019.This is the first time Malaysia’s unemployment rate reached above 4% in almost three decades. Although the labour market is expected to grow marginally in 2021, it will occur in a challenging environment due to the uncertainty of Malaysia’s current health situation. While COVID-19 cases in Malaysia continue to record high numbers in 2021, certain relaxations for economic activities to operate were permitted, allowing businesses to maintain their momentum.

INDONESIA
International companies planning on setting up nickel processing facilities in nickel-rich Indonesia
(23 April 2021) International companies are hoping to set up nickel processing facilities in Indonesia in order to tap into the country’s rich nickel reserves. Nickel is a critical part of electric-vehicle batteries, and Indonesia plans to leverage upon its rich reserves to establish a domestic battery supply chain. Germany-based BASF and French nickel processor Eramet are considering building a nickel- and cobalt-refining complex in Indonesia to begin operations in the mid-2020s, while Japanese Sumitomo Metal Mining has also expressed strong interest in bringing a multi-billion dollar Indonesian refinery online in mid-decade. Currently, there are three nickel-refining plants under construction in Indonesia expected to begin operations by 2023, according to the Ministry of Energy and Mineral Resources. Indonesia is believed to hold some 21 million tons of nickel in reserves, according to the U.S. Geological Survey (the largest reserves in the world).

THE PHILIPPINES
The Philippines issued US$2.5 billion in Eurobonds in three part bond sale
(22 April 2021) On 21 April 2021, the Philippines issued US$2.5 billion in Eurobonds, making it the first time the country returned to the Euro bond market in more than a year. The country tapped into the low interest rates of the Euro bond market with a three part bond sale. Proceeds from the bond issuance will be used in part to finance the country’s budget, as it grapples with the highest number of active COVID-19 cases in Southeast Asia. The issuance of the Eurobonds came less than a month before the country raised US$509 million worth of Samurai bonds. The Philippines sold EUR 650 million of four-year notes at 75 basis points over mid swaps.

VIET NAM
Vietnamese real estate giant VinGroup officially launches US$2.8 billion resort in Phu Quoc
(23 April 2021) Viet Nam’s real estate development giant VinGroup officially launched a US$2.8 billion resort in the north of Phu Quoc. Phu Quoc United Center is described as a ‘super tourism resort entertainment complex’, and covers more than 1,000 hectares and provides around 12,000 hotel rooms across a number of 5-star hotel brands. The resort includes Viet Nam’s largest theme park, VinWonders Phu Quoc, plus an animal conservation park, an 18-hole golf course, a shopping and entertainment precinct, MICE facilities, multimedia shows, 24-hour street markets and a hospital. The development will also comprise Corona Resort & Casino, which was opened in January 2019 by Phú Quốc Tourism Development and Investment Company and which is still the only casino in Vietnam at which locals are allowed to gamble.

SOUTH KOREA
South Korea to halt state-backed financing of overseas coal-fired power plants
(22 April 2021) South Korea is to halt state-backed financing of overseas coal-fired power plants, and also plans to strengthen its emissions reduction commitment under the Paris agreement. South Korea’s president Moon Jae-In made the announcement during a virtual climate summit hosted by US President Joe Biden. Although the American government had requested South Korea to withdraw from recent coal projects, the country will only halt funding for future plants abroad. South Korea plans to increase its current emissions reduction target under the Paris agreement by 24.4% by 2030 from its 2017 levels, by the second half of 2021. International investors have focused on South Korea’s financing of overseas coal development projects, particularly after the country pledged to become carbon-neutral by 2050.

SOUTH KOREA
South Korea grants conditional approval to allow public to use two COVID-19 self-test kits
(22 April 2021) South Korea’s government granted conditional approval to allow the public to use two COVID-19 self-test kits for the first time, as the country grapples with a resurgence of cases and a possible fourth wave. The manufacturers of the test kits, SD Biosensor Inc and Humasis Co Ltd, were given three months to provide further clinical trial data on self-testing as a condition of the approval. As of now, the self-test kits have been limited to medical specialists in South Korea. The kits can yield results within 15 minutes, and with an accuracy of 90%. This is compared to the 98% accuracy proven for industry-standard PCR tests and specialist-administered rapid tests. Local government chiefs have encouraged their use in homes, restaurants, shops and places of worship as a quick way to detect possible infections.