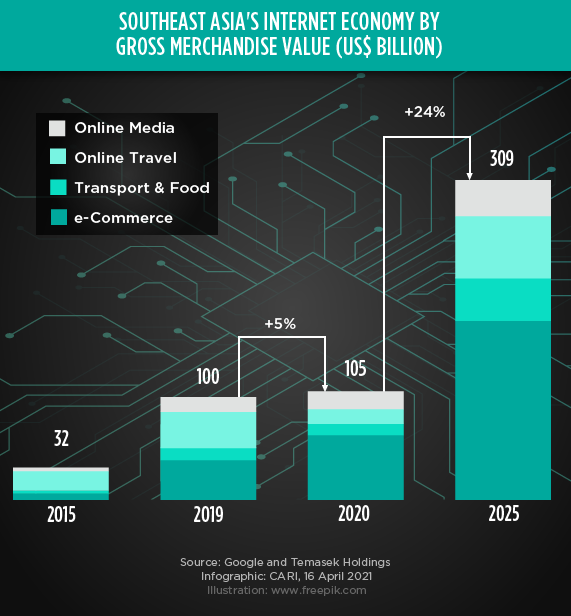 SINGAPORE
Grab’s plan to become US-listed public company to value company at almost US$40 billion
(15 April 2021) Singapore-based tech company Grab plans to become a US-listed public company via a merger with a special purpose acquisition company, or SPAC. Grab’s plan for a listing would value the company at almost US$40 billion, making it the largest such deal to use a SPAC. Grab expects to raise more than $4 billion through the SPAC deal and be traded on the Nasdaq in the ‘coming months’. Grab’s public listing is expected to open the door for investors to further tap into Southeast Asia’s booming startup ecosystem. A 2020 report by Google and Temasek projected Southeast Asia’s Internet economy to triple between 2020 and 2025, from US$ 105 billion to US$ 309 billion respectively. As of now, the only publicly listed internet company from the region is Singapore-based online gaming and e-commerce company Sea.

VIET NAM, INDONESIA
Viet Nam and Indonesia expected to be biggest beneficiaries of US economic boom
(13 April 2021) An expected boom in the US economy in 2021, fueled by massive stimulus measures, US$1.7 trillion of extra savings by American consumers, and wealth effects from higher asset prices, is expected to benefit Asian exporters. Viet Nam and Indonesia in particular are expected to be the biggest beneficiaries, with Bloomberg Economics projecting that if the US’ growth rate accelerates to 7.7% in 2021, it would add 1.09% and 1.06% to Viet Nam and Indonesia’s year-on-year growth respectively. Bloomberg Economics noted that the US buys more than 10% of Asia’s exports on average. In addition to a projected increase in direct demand from the US, there is also expected to be significant indirect spillovers for Asian firms linked to US supply chains. Bloomberg Economics noted that the key factor determining the extent of US spillovers on Asian economies will be the composition of US spending, with more spending on services expected to have less impact on Asian exporters.

VIET NAM
Record number of new retail investors in Viet Nam’s stock market in 2020
(12 April 2021) An estimated 400,000 new stock investors reportedly joined Viet Nam’s stock market in 2020, a record increase. It is believed the influx of new investors is due to three main reasons: low interest rates, social distancing measures keeping Vietnamese at home, and the rise of a generation with significant inherited wealth. In 2020, the Vietnam Securities Depository counted 2.7 million domestic individual accounts, a record jump of 16.8% versus 2019. Likewise, in January 2021 86,000 new trading accounts opened, higher than any month in 2020. The surge to equities also signals a change in mindset in the Vietnamese public, who traditionally invested their money in real estate or savings accounts. Vietnam has two bourses, the Ho Chi Minh City Stock Exchange and the Hanoi Stock Exchange, with a combined market capitalization of US$ 211 billion.

MALAYSIA
Prime Minister claims Malaysia open to all free trade agreements as long as they are fair
(15 April 2021) Malaysian Prime Minister Tan Sri Muhyiddin Yassin informed industry players during a closed door meeting at the International Trade and Industry Ministry (MITI) on 15 April 2021 that Malaysia would be open to all free trade agreements so long as they were fair and beneficial to the country. In particular with regards to the Comprehensive and Progressive Agreement for Trans-Pacific Partnership (CPTPP), he stated that the Malaysian government would determine a ‘pragmatic way forward’ for the agreement. He noted that MITI is already exploring options in this area, including possible ideas to facilitate Malaysia’s ratification of the CPTPP. He also stated that it was important for Malaysia to pursue robust trade and investment policies to attract investors.

SINGAPORE
Home sales in Singapore doubled in March 2021, fueling fears of cooling measures being implemented
(15 April 2021) Data from Singapore’s Urban Redevelopment Authority showed that purchases of new private apartments doubled to 1,296 in March 2021 from 645 units in February 2021. Singapore’s residential market is believed to be heating up as the economy begins to recover from the COVID-19-induced recession. Demand is rising due to buyers anticipating prices to climb further in tandem with Singapore’s economic recovery, as well as many taking advantage of low interest rates to upgrade their housing. Analysts have warned of authorities implementing possible measures to cool the market. It has been noted that Singapore home prices grew 2.9% in the last quarter of 2020, the most since the second quarter of 2018, right before authorities last imposed cooling measures. Prices of public housing flats and luxury homes have also risen, with some breaking records.

INDONESIA, GERMANY
Indonesia offers to open exclusive German industrial area within Central Java
(15 April 2021) Indonesian President Joko “Jokowi” Widodo offered to open an exclusive German industrial quarter in the Batang Integrated Industrial Park in Central Java. He also urged Germany to increase industrial investments in Indonesia by building factories, as well as by integrating Indonesia into its global supply chains. He also suggested that Germany and Indonesia form a partnership to develop vocational schools in Indonesia to improve the latter’s human resources. The Batang Integrated Industrial Park sits on 4,368 hectares of land owned by state-owned plantation holding company PT Perkebunan Nusantara (PTPN) IX in Gringsing district, Batang regency. Germany was Indonesia’s fourth largest investor in 2020, having invested some US$1.4 billion. As well, trade between both countries in 2020 reached US$5.48 billion.

THE PHILIPPINES
New two week lockdown in Manila may cause Philippines to miss its growth targets for 2021
(14 April 2021) The Philippines’ Economic Planning Secretary stated that the country may miss its economic growth target of at least 6.5% in 2021 after a resurgence of COVID-19 cases forced Metro Manila and the adjacent provinces of Bulacan, Cavite, Laguna and Rizal into a new two week lockdown in late March 2021. He stated that first-quarter gross domestic product performance may be close to zero compared to the same period in 2020, but will be a lot better than the final three months of 2020, when the economy contracted 8.3%. It is believed the economy can still recover in the coming months by opening certain areas, accelerating government spending, and speeding up the vaccination rollout for frontline workers.

AUSTRALIA
Australia one of first nations to regain all jobs lost throughout COVID-19 pandemic
(15 April 2021) Australia is one of the first countries to regain all jobs lost during the COVID-19 pandemic in 2020, reflecting a successful early suppression of the pandemic as well as massive fiscal measures to support the economy. According to government data, employment and hours worked in March 2021 were higher than in the same month of 2020. Unemployment fell to 5.6% in March 2021, exceeding estimates by economists. Consumer sentiment in Australia is reportedly surging, as households with large savings are encouraged to spend and firms consider investing. This in turn has prompted increased hiring. The Reserve Bank of Australia in February 2021 doubled its quantitative easing program to US$155 billion.&nbsp

JAPAN
Slow rollout of vaccines to cause Japan’s annual output to only regain pre-pandemic levels in 2023
(12 April 2021) Japan’s vaccination rollout was expanded to people 65 and over in age on 12 April 2021, making them the first members of the public to be given the vaccine after priority was given to inoculating frontline medical staff first. Japan’s vaccination rollout has been noticeably slower than other countries including the US and UK, in part due to Japan’s dependence on imported vaccines as well as a strict approval process in Japan for foreign vaccines (given public skepticism over the effectiveness of vaccines). According to Bloomberg Economics, Japan’s slow rollout of vaccines means its annual output is not expected to regain its 2019 pre-pandemic level until 2023, compared with 2021 for the U.S. and 2022 for the Euro-zone.

CHINA
China’s GDP grows record 18.3% in first quarter of 2021 due to surging exports
(16 April 2021) Data released by the National Bureau of Statistics saw China’s GDP grow by a record 18.3% in the first quarter of 2021, rebounding from the 6.8% contraction in the same period in 2020 at the start of the COVID-19 pandemic. China's GDP growth for the January-March period of 2021 followed a 6.5% gain in the final quarter of 2020. This was fueled by greater demand from China’s trading partners, with exports jumping 49% during the quarter to US$710 billion, while imports rose 28% to US$593.6 billion. China projects 6% GDP growth overall for 2021, with some economists projecting growth to slow down in the coming quarters due to economic conditions in other countries.