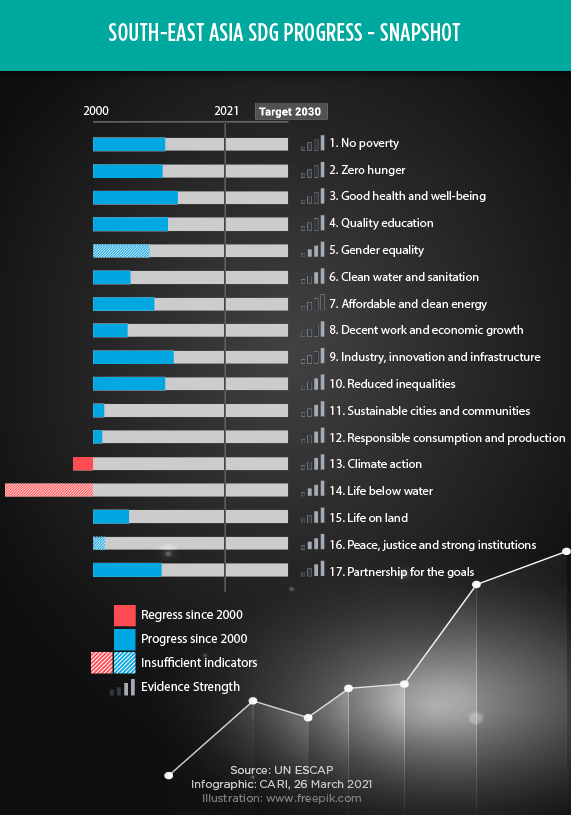 Southeast Asia on track to eradicate income poverty, but other SDG areas need work according to UN SDG progress report 2021
(March 2021) The recently Asia and the Pacific SDG Progress Report 2021 released by UN ESCAP found that the South-East Asia region achieved significant progress on no poverty (Goal 1), zero hunger (Goal 2), good health and well-being (Goal 3), quality education (Goal 4), clean water and sanitation (Goal 6) and industry, innovation and infrastructure (Goal 9). According to the report, South-East Asia is on track to eradicate income poverty in terms of the population living below international or national poverty lines. However, progress toward no poverty (Goal 1) is negatively impacted by losses from natural disasters and the lack of spending on education and health services. Similarly, the region is on track for its 2030 targets for undernourishment and children affected by stunting or malnutrition, but overall progress on zero hunger (Goal 2) is with nearly 100 million people still affected by slow progress in eliminating food insecurity in the region.South-East Asia also needs to accelerate progress in bridging digital divides. While Internet users account for a large share of the population in some countries (Brunei Darussalam, 95%; Malaysia, 84.2%; and Singapore, 88.9%), they account for less than 30% of the population in other countries (Lao Peoples Democratic Republic, Myanmar and Timor-Leste). Slow progress is also observed in broadband subscriptions, especially 20 for higher speeds (more than 10Mbit/s) which stood at 5.4 per 100 population, less than half the world average.

MALAYSIA
Moody’s revises Malaysian banks’ outlook from negative to stable
(25 March 2020) Moody’s Investors Service has revised Malaysia’s banking system outlook to stable from negative to reflect an improving operating environment. In a research note today, Moody’s said operating conditions will improve as Malaysia’s real gross domestic product will expand 6.2% this year after contracting 5.6% in 2020, supported by the government’s fiscal spending and a recovery in global demand that will provide a boost to the country’s net exports. It said banks asset quality will remain stable despite the increase in non-performing loans (NPLs) when forbearance and support measures for borrowers end, on the back of proactive increases in loan-loss provisioning in 2020 which will enable banks to absorb anticipated new loan losses. “The banking system’s Common Equity Tier 1 ratio stood at 14.8 at the end of 2020, a sufficient buffer against unexpected risks,” it said.

SINGAPORE
Star Alliance to establish Center of Excellence in Singapore
(22 March 2021) Star Alliance will establish a management office in the city-state of Singapore later this year. It considers a new centre of excellence will be an essential dimension for the alliance to deliver on its post-Coronavirus strategy and remain innovative, resilient and nimble. The Singapore office will complement the long-standing office in Frankfurt, Germany and will focus on progressing its strategy in digital customer experience. Two members of the Alliance, Lufthansa and Singapore Airlines, have established innovation hubs in the City, another benefit as the Alliance continues its ground-breaking digital customer experience innovations. Singapore was selected based on considered criteria, such as access to innovation and global competitiveness. Singapore has also been ranked highly for the ease of doing business by the World Bank consistently and has been ranked the most competitive country in the world on several occasions.

VIETNAM
Mekong Delta needs $16.5b over 5 years to foster sustainable development
(22 March 2021) The Mekong Delta needs VNĐ338 trillion (US$16.5 billion) in the next five years to upgrade its traffic infrastructure, improve water storage and mitigate riverbank and coastal erosion. The major expressways with a total of over 1,000km including Cần Thơ – Cà Mau Expressway, Châu Đốc – Cần Thơ – Sóc Trăng Expressway, and Hà Tiên – Rạch Giá – Bạc Liêu Expressway will cost VND150 trillion ($6.49 billion), expected to improve connectivity in the region. Vietnam News reported that Prime Minister Nguyễn Xuân Phúc has instructed the Ministry of Transport to prioritise the Cần Thơ – Cà Mau Expressway in 2021-25 and solicit private investment for the HCM City – Trung Lương – Mỹ Thuận – Cần Thơ – Cà Mau highway. The Trung Lương – Mỹ Thuận Expressway should be completed this year and open to traffic, he said. Work to allow large ships to enter the Hậu River, a tributary of the Mekong, and developing logistics and waterways across southern Việt Nam are also priorities, he added. The region has more than 335,400 hectares of orchards (36.3%), with the major fruits being mango, orange, pomelo, rambutan, longan, durian, pineapple, and dragon fruit.

LAO PDR
Laos Government to address seven urgent issues to spur development
(24 March 2021) Newly-elected Prime Minister Phankham Viphavanh highlighted the seven concerns when presenting a draft of the 9th five-year National Socio-Economic Development Plan for 2021-25 and State Budget Plan for 2021-25 to the National Assembly. Phankham vowed to increase revenue and address the chronic public debt to boost economic growth and to incorporate an austerity policy into the national agenda. Secondly, the government will take strong action to counter social ills such as corruption, drug trafficking, and road accidents. Thirdly, the government will focus on economic recovery in the wake of the Covid-19 pandemic and create more job opportunities. In addition, the government will address the economic vulnerability, focusing on quality growth and reducing reliance on the ineffective extraction of natural resources to boost economic growth. Fifth, the government will reduce development disparities between urban and rural areas to allow more people to access basic public services, especially health and education. Sixth, the government will focus on human resource development, moving towards professionalism in response to the 4.0 digital age and new normal. Finally, issues relating to exchange rate fluctuations and depreciation of the kip will be addressed by boosting the production of goods for export and reducing imports. Over the past five years, the economy has grown at an annual average rate of 5.8%, lower than the 7.2% approved by the National Assembly.

MALAYSIA, THAILAND, PHILIPPINES
Malaysia, the Philippines & Thailand lose US$6bil in material value of plastics a year
(23 March 2021) More than 75% of recyclable plastics in Malaysia, Thailand and the Philippines are left to waste, representing a “significant untapped business opportunity” in the circular economy, according to the Plastic Circularity Market Study Series released by WorldBank on 23 March 2021. Thailand, which has the largest petrochemical sector in Southeast Asia, recycles the smallest portion of its plastic waste at less than 18%. In both Malaysia and the Philippines, major brands in the packaging and fast-moving consumer goods industries are opting for more recycled content in their products. However, most recyclable suppliers are small- and medium-sized enterprises that often don’t have the scale, management systems or technologies to meet the demand. “These studies show that there is an untapped opportunity to reap environmental and economic benefits with clear and complementary interventions from the private and public sector, ” said Ndiamé Diop, World Bank country director for Brunei, Malaysia, Philippines and Thailand. Setting recycled-content targets, mandating “design for recycling” standards, and imposing waste-collection requirements per industry can unlock additional material value for Southeast Asia.

CAMBODIA
Cambodia extends tax holidays for airlines, tourism-related businesses for another 3 months
(25 March 2021) On Thursday, the Cambodian government extended tax breaks for airline companies and tourism-related businesses for another three months from April to June 2021 to help offset losses caused by the COVID-19. “The extended measures aim to mitigate the impact of the Feb. 20 community outbreak of COVID-19 on the socio-economic situation and to continue supporting businesses in the context of COVID-19,” the government said in a press statement. The Southeast Asian nation has been enduring the third community COVID-19 outbreak since Feb. 20. In a bid to stem the virus, the kingdom has shut down all schools, sports facilities, museums, cinemas and entertainment venues nationwide. The kingdom launched an anti-COVID-19 vaccination drive with China’s Sinopharm vaccine on Feb. 10 and with the Indian-made AstraZeneca vaccine on March 4. According to a government report, some 342,000 people in priority groups had been vaccinated against the virus as of Wednesday.

RCEP
China pushing for early implementation of RCEP trade deal
(25 March 2021) China is encouraging the early implementation of the Regional Comprehensive Economic Partnership (RCEP), and members of the Asia-Pacific trade pact are aiming for it to take effect from January 1, 2022, China’s Vice-Commerce Minister Wang Shouwen said on March 25. China has already ratified the agreement and is actively preparing for its implementation, said Wang, noting that 87% of the binding obligations involving China under the RCEP have already been arranged. All 15 members of the RCEP have agreed to ratify the deal within the year and push for it to become effective on January 1, 2022, said Wang. Ratifications from at least six ASEAN member countries and three non-ASEAN member countries are needed for the agreement to take effect in these countries.

NEW ZEALAND
28th ASEAN-New Zealand Dialogue to begin; ASEAN, New Zealand forge stronger cooperation under new plan of action
The 28th Association of Southeast Asian Nations (ASEAN)-New Zealand Dialogue took place virtually on 23 March 2021. The dialogue builds upon the ASEAN-New Zealand collaboration by continuing the implementation of the ASEAN-New Zealand Strategic Partnership for 2021-2025. The meeting identified a number of key areas in the new Plan of Action, where ASEAN and New Zealand could enhance their collaboration, such as maritime security, fight against illegal, unreported and unregulated (IUU) fishing, sustainable development, marine sustainability, trade, investment and economic recovery plan, renewable energy, disaster risk management, settlement of climate change, healthcare, human capital development, education, and people-to-people connection. In advancing economic cooperation, both sides look forward to the upgrade negotiations of the Agreement Establishing the ASEAN-Australia-New Zealand Free Trade Area (AANZFTA), as well as the conclusion of the negotiation of the Regional Air Services Agreement between ASEAN and New Zealand. The meeting exchanged views on regional and international issues of common interest, highlighting the importance of ASEAN-led mechanisms and ASEAN’s centrality in maintaining peace, security and stability in the region.