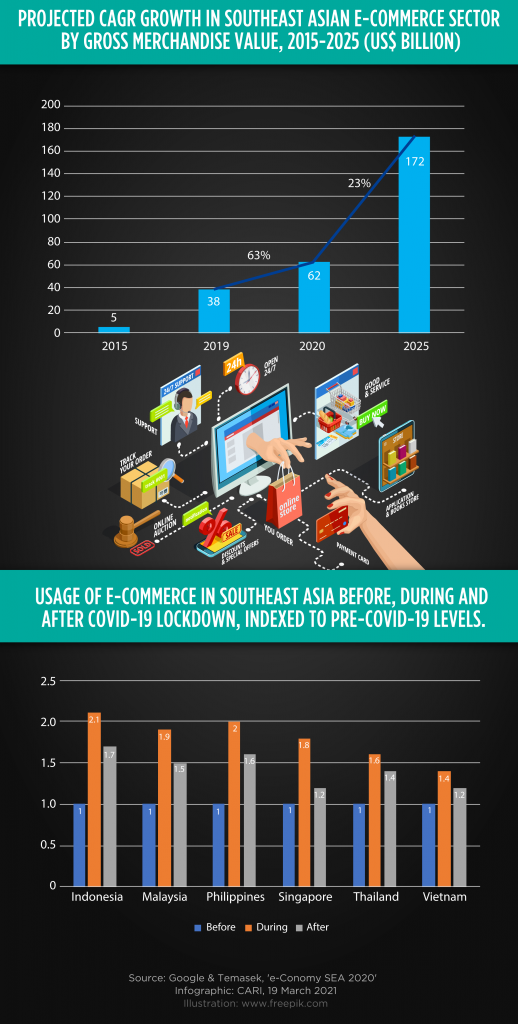 ASEAN
Singapore-based Sea Ltd share price rises 395% in 2020, making it biggest public company in Southeast Asia
(17 March 2021) Singapore-based Sea Ltd has emerged as Southeast Asia’s largest public company, with its share price on the New York Stock Exchange has risen by 395% in 2020. Sea Ltd’s valuation was measured at US$120 billion in 2020, trumping the valuations of regional tech rivals such as Grab and Gojek, which measured at US$14 billion and US$10 billion respectively. This was largely based on significant gains in its core businesses in gaming,e-commerce and digital payments in 2020 due to the conditions set by the COVID-19 pandemic. According to digital research firm iPrice, Sea Ltd’s unit Shopee became the most visited e-commerce platform in Indonesia in 2020, while in Thailand and the Philippines Shopee topped Alibaba Holdings-backed Lazada in monthly website visits in the second and third quarters of 2020 respectively. Sea Ltd’s success has also been attributed to its status as a Southeast Asian tech company being listed in a Western market, giving investors access to Southeast Asia’s rapidly expanding digital economy. Sea Ltd was able to raise nearly US$3 billion in December 2020 through new share offerings.

INDONESIA
Indonesia’s central bank keeps key rates steady in order to maintain rupiah stability
(18 March 2021) Indonesia’s central bank kept its key interest rate steady amidst global market uncertainty. The benchmark 7-day reverse repurchase rate was left unchanged at 3.50%, with the bank’s governor stating the need to maintain rupiah stability amidst rising uncertainty in global financial markets. Policymakers are concerned that further monetary easing could weigh on the rupiah, which is already under pressure due to capital outflows. The rupiah fell by more than 3% in the past month. Indonesia’s central bank stated they had been ‘aggressive’ in its monetary easing in 2020, having cut rates by a total of 150 basis points since the COVID-19 pandemic started in early 2020. The governor stated they would boost efforts to stabilize the currency through a ‘triple intervention’ in the spot foreign exchange, domestic non-deliverable forward, and bond markets.

INDONESIA
Indonesian government mulls allowing foreign tourists to visit Bali as soon as June 2021
(18 March 2021) The Indonesian tourism ministry is mulling allowing foreign tourists to visit Bali as soon as June 2021 under a travel corridor program to help economic recovery. The travel corridor arrangement will be offered to countries deemed successful in their vaccination program and in containing the spread of the virus. Certain holiday spots in Bali such as Ubud, Sanur and Nusa Dua are to be included in a pilot program to begin receiving foreign travellers in mid-June or July 2021 under strict health protocols. As many as 2 million Bali residents will have to be vaccinated before the pilot program can begin. The government is also considering allowing chartered flights to bring in overseas travellers under the pilot program.

THAILAND
Thai pork exports rise by 69% in 2020 due to African swine flu impacting many Asian countries
(15 March 2021) Thailand’s pork exports have risen by 69% in 2020. Thailand is one of the few Asian countries that hasn’t reported an outbreak of the African swine flu, which has killed millions of hogs in the region. Asia accounted for 82% of all swine losses globally between 2016 and 2020, surpassing losses in Europe and Africa. Thai shipments of live pigs rose by 339% in value in 2020, while exports of chilled, frozen and processed pork were up 69%. This is despite the drop in Thailand’s overall exports in 2020, falling by 6% amid the COVID-19 pandemic. Pig and pork exports represent 0.3% of Thailand’s total exports and are expected to continue growing in 2021.

VIET NAM
Viet Nam begins first-phase clinical trials for second domestically developed COVID-19 vaccine candidate Covivac
(19 March 2021) Viet Nam has begun first-phase clinical trials for its second domestically developed COVID-19 vaccine candidate Covivac. The Phase 1 trials will conclude by 20 April 2021, with an interim report due in July. All trials are expected to be finished by the end of 2021. Viet Nam’s first COVID-19 vaccine candidate, Nanocovax, started Phase 2 trials in late February 2021. If proven effective, it could receive emergency approval by the government as early as May. While Nanocovax was developed by startup Nanogen Pharmaceutical Biotechnology in collaboration with Vietnam Military Medical University, an institution under the Defense Ministry, Covivac was developed by the Institute for Vaccines and Medical Biologicals. Viet Nam started its mass vaccinations on 8 March using the AstraZeneca vaccine.

AUSTRALIA
Unemployment rate drops to 5.8% month-on-month in February 2021
(18 March 2021) Australia’s unemployment rate fell by 5.8% in February 2021 from a revised 6.3% in January 2021. Employment jumped by 88,700 in February, compared with an expected 30,000 gain. The workforce participation rate was unchanged at 66.1%. The Australian central bank projects the jobless rate falling to around 6% by the end of 2021, and 5.5% by the end of 2022. Under an optimistic scenario for unemployment, the rate would drop to 4.75% by end-2022. Australia’s strong employment growth was fueled by rising sentiment from a vaccine rollout combined with fiscal and monetary stimulus measures. The central bank in February 2021 extended its quantitative easing program by a further US$78 billion and reiterated that it does not expect to increase interest rates until 2024.

JAPAN
State of emergency in Tokyo area set to end on 21 March 2021
(18 March 2021) The Japanese government is set to end the state of emergency in the Tokyo area by 21 March 2021, after claiming that targets for relieving strain on the health care system had been reached. The emergency measure had been in place for around two months and impacted Tokyo and the adjoining prefectures of Kanagawa, Saitama and Chiba. Under the emergency measure, local governments instructed bars and restaurants to close by 8 p.m. and advised people to avoid going out unnecessarily. The Japanese government plans to put in place measures to continue financial support for bars and restaurants. The lifting of the emergency measure comes days before the torch relay begins on 25 March 2021 for the Tokyo Olympics, scheduled to start in July 2021.

AUSTRALIA, NEW ZEALAND
Australia and New Zealand close to agreeing on terms for a quarantine-free travel corridor
(18 March 2021) New Zealand’s Deputy Prime Minister stated that both New Zealand and Australia are close to agreeing to terms for a quarantine-free travel corridor. New Zealand media stated on 18 March 2021 that the New Zealand cabinet could decide as soon as next week to open the border to Australia from mid-April onwards. Plans for a so-called travel bubble between the neighbouring countries have been repeatedly pushed back as each country grappled with sporadic outbreaks. A resumption of cross-border travel would be a big boost for both countries ailing tourism industries. Outstanding issues which need to be resolved include what to do in the event of an outbreak.