CARI Captures Issue 493: ASEAN plans to facilitate post-COVID travel with the use of digital vaccine certificates 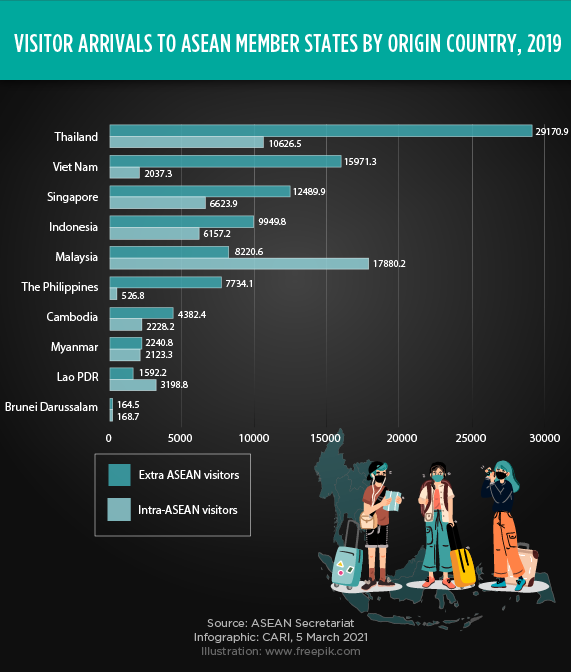 ASEAN
ASEAN plans to facilitate post-COVID travel with the use of digital vaccine certificates
(3 March 2021) During the ASEAN Economic Ministers meeting that ended on 3 March 2021, a digital coronavirus vaccine certificate was mulled to resuscitate the intra-regional tourism market. Intra-ASEAN visitors stood at 51 million in 2019, accounting for around 36% of the bloc’s total, composing both tourists as well as business travellers. A digital coronavirus vaccine refers to smartphone-based proof of having been vaccinated, and other countries such as the European Union have mulled similar policies. Tourism is a major industry for many ASEAN countries, and has been severely damaged by prolonged border closures, affecting the overall regional economy. Thailand’s GDP shrank by 6.1% in 2020, while Singapore’s GDP shrank by 5.4%.

INDONESIA
The Indonesian government plans to regulate e-commerce to prevent predatory pricing
(5 March 2021) The Indonesian government plans to introduce regulation on e-commerce platforms to prevent predatory pricing. Indonesia’s President Joko Widodo also called for Indonesians to prioritize Indonesian-made goods over imports. Widodo’s comments came after concerns that Chinese manufacturers were copying products designed by small-and-medium enterprises in Indonesia and selling them on e-commerce platforms at a fraction of the price. In 2020, Indonesia had lowered the threshold at which it begins to impose import taxes on consumer goods sold via e-commerce to reduce overseas shipments, including Chinese goods. China is Indonesia’s largest trading partner and major investor, with the latter constantly complaining of a persistently large trade deficit.

SINGAPORE
Singapore to require foreign dependents to obtain their work passes
(3 March 2021) The Singaporean government plans to require foreign dependents who seek employment to obtain their work pass. Foreign dependents at this point merely require a letter of consent, with the majority of dependents do not work. These changes to their work status will start on 1 May. This comes as Singapore seeks to impose more constraints on foreign workers, a key issue in 2020’s general elections. Dependant’s Pass holders who have sought employment via a letter of consent currently make up only about 1% of all work pass holders, according to government estimates. In 2020, Singapore’s contraction in employment came almost entirely on the side of non-residents, with net employment among locals rising.

MALAYSIA
Malaysian Prime Minister calls for the country to break out of the middle-income trap.
(5 March 2021) The Malaysian Prime Minister stated during the virtual Youth Economic Forum 2021, themed “A Brave New World” held on 5 March 2021 that Malaysia needs to transform to break out of the middle-income trap. He stated that Malaysia needed to transform into a global exporting player, grow its manufacturing capabilities, and create its own home-grown multinational companies (MNCs). The Prime Minister stated that historically countries grew rich by learning how to produce new, high-value products for export. He observed that ‘based on the Economic Complexity Index, even a one standard deviation increase can elevate Malaysia’s GDP (gross domestic product) growth by between 0.7% and 1.6% a year.’ In terms of creating home-grown MNCs, he pointed to the example of South Korea as a country whose growth would be driven by domestic MNCs.

SINGAPORE, MYANMAR
Central bank warns financial firms to monitor suspicious transactions or fund flows between Singapore and Myanmar
(4 March 2021) Singapore’s central bank issued a circular on 25 February warning Singapore’s financial firms to be vigilant against any suspicious transactions or fund flows between Singapore and Myanmar, noting the opportunities for financial crimes. In the circular, the central bank noted that the situation in Myanmar could give rise to money laundering, terrorism financing, and other financial crimes. Financial institutions in Singapore were urged to appropriate measures to manage any risks arising from their business activities and customer relationships, including reputational, legal and operational risks. Financial institutions were urged to file any suspicious transaction reports and inform authorities promptly.

AUSTRALIA
Australian house prices to rise by 10% in 2021, fueled by low-interest rates and improved sentiment
(5 March 2021) House prices in Australia are expected to advance 10% in 2021 according to Goldman Sachs, fueled by a low-interest-rate environment and improved consumer sentiment. Outlooks for residential construction and turnover have also strengthened in recent months. Goldman Sachs estimated that the housing industry’s overall impulse to annual GDP will be around +1% over the next few years. This projection is based on the assumption that immigration will normalize to pre-COVID levels in 2022, and that the central bank doesn’t hike interest rates until the second half of 2024. However, Goldman Sachs noted that prolonged border closures or an earlier-than-expected tightening in monetary policy pose downside risks. The consultancy firm pointed to the potential of the central bank to become hawkish over the next few years around rising housing debt levels and ‘macro stability risks.