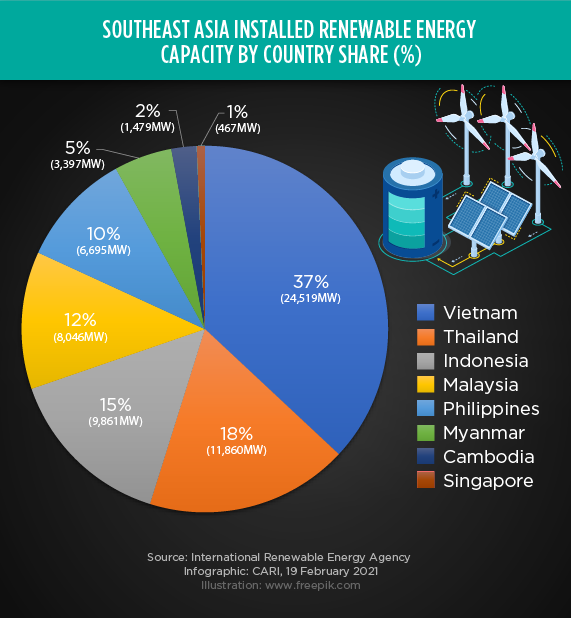 SINGAPORE
Singapore government plans to issue green bonds on select public infrastructure projects
(19 February 2021) Singapore’s government plans to issue green bonds to fund infrastructure projects as revealed in their latest Budget announced on 16 February 2021, with up to US$14.3 billion of public sector green projects already identified. The government announced that the issuance of green bonds will help spur the development of green bonds within the private sector, through the deepening of market liquidity, attracting green issuers, capital, and investors, and anchoring Singapore as a regional green finance hub. Green bonds issued by the government will encourage the development of the external reviewer market, and serve as a reference point for the Singapore dollar corporate green bond market, including through the standards and frameworks applied. Among the green projects to be financed by green bonds will be the Tuas Nexus integrated waste and water treatment facility.

INDONESIA
Indonesia’s central bank cuts its benchmark interest rate to a record low of 3.5%
(18 February 2021) On 18 February 2021, Indonesia’s central bank cut its seven-day reverse repurchase rate by 25 basis points to a record low of 3.5%. This comes amidst fears that a resurgence of COVID-19 cases and a reimposition of movement curbs in response will further stall Indonesia’s economic recovery. Recent economic indicators have shown marked declines in imports, retail sales and consumer confidence. The central bank also downgraded its growth projections for 2021 to 4.3% to 5.3%, from an earlier forecast of 4.8% to 5.8%. Bank Indonesia’s decision to cut its rates was based on forecasts of continued low inflation and the stability of the rupiah, as well as steps to boost the national economic recovery. Economists believe that with limited room for further cuts, moving forward the central bank will have to rely on alternative measures like quantitative easing and macroprudential policy to boost growth.

INDONESIA
Indonesian government to allow private businesses to fund and distribute the COVID-19 vaccines
(18 February 2021) The Indonesian government is finalizing a plan to allow private businesses to fund and distribute COVID-19 vaccines to meet the target of vaccinating more than 180 million people by the end of 2021. The private campaign will use different types of vaccines and will remain free for Indonesians. According to the head of the Indonesian Chamber of Commerce and Industry, around 5,300 companies have signed up to take part in the program. The government will continue to hold control of the database and will be the sole regulator of the inoculation process. Private vaccinations will only take place after the first round to vaccinate health workers and public servants are completed. The private program is expected to start as soon as March 2021, or in the second quarter of 2021.

THE PHILIPPINES
Philippines government negotiating for as many as 170 million COVID-19 vaccine doses
(16 February 2021) The Philippines government is currently negotiating for as many as 170 million COVID-19 vaccine doses, to reach its goal of vaccinating most of its population within 2021. A fourth of the vaccine doses will come from the World Health Organization-backed COVAX Facility, with first shipments expected later in February 2021. The Philippines’ other vaccine sources will include 30 million doses from Novavax Inc, 20 million doses from Moderna Inc., and 25 million doses from Sinovac Biotech Ltd. The Philippines is expected to experience difficulties in procuring doses in the first half of 2021. The country aims to vaccine up to 70 million adults in 2021 under its vaccine rollout.

THAILAND
Thai economy contracts by 6.1% in 2020, at worse performance since the 1997 Asian Financial Crisis
(15 February 2021) Thailand’s economy contracted by 6.1% in 2021, its worse performance since the 1997 Asian Financial Crisis, during which its economy had contracted by 7.6%. Officials have also downgraded the growth projections for the Thai economy in 2021 to between 2.5% to 3.5%, from a previous estimate of between 3.5% to 4.5%. This is despite a slight improvement in the final three months of 2020 due to government stimulus measures. Thailand’s contraction in 2020 was due to both the effects of the COVID-19 pandemic on its tourism industry, as well as political instability caused by the ongoing protests. In response to the pandemic slump, the government implemented a record US$59.7 billion stimulus package, cash handouts, and tax incentives.

VIETNAM
Remittances to Ho Chi Minh City reach a record US$6.1 billion in 2020, up 12% year-on-year
(18 February 2021) Ho Chi Minh City received remittances worth US$6.1 billion in 2020, which was an increase of 12% year-on-year. Remittances are a major source of US dollars into Vietnam, alongside exports and foreign investments. The main sources of remittances for Vietnam in 2020 came from the United States, Australia, and Canada. According to the World Bank, total remittances to Vietnam reached US$15.7 billion in 2020. Remittance flows to the East Asia and Pacific region was projected to have fallen by 11% in 2020 to US$131 billion due to the effects of the COVID-19 pandemic.

JAPAN
Japan’s economy grows by 12.7% in the final quarter of 2020 from the previous quarter, signalling economy’s resilience
(15 February 2021) Japan’s GDP grew by annualised 12.7% quarter-by-quarter in the final three months of 2020, possibly signalling the potential for a more sure-footed recovery once Japan’s state of emergency ends. Japan’s economy contracted by 4.8% for the whole of 2020, bolstered by surging trade, gains in household spending, and outlays by businesses expanding at the fastest pace in more than five years. Economic prospects are expected to improve once Japan’s state of emergency ends, with some hopes that this will take place in some areas before 7 March. Although Japan’s economy minister noted that the results indicate the economy’s ability to recover, consumer expenditure remains below average, while exports could soften if the virus triggers more restrictions in Europe or other important markets.

CHINA, UNITED STATES
The United States to keep tariffs on Chinese goods in place, for now, to evaluate how to proceed
(19 February 2021) The United States’ Treasury Secretary Janet Yellen stated that the Biden administration plans to keep tariffs placed on Chinese goods in place for now, and will evaluate what to do going forward. The American government had stated in January 2021 that it would review all national security measures put in place by former President Donald Trump, including an interim trade deal with China. Although the deal eased tensions between both countries, most tariffs by both countries remain in place. Although China had pledged to buy US$200 billion worth of American goods and services over the next two years under the deal signed in January 2020, it fell short by 42% of its target for 2020.

AUSTRALIA
Household expenditure rose by slower-than-expected pace in January 2021 due to lockdown in Queensland state
(19 February 2021) Household expenditure in Australia rose by a slower-than-expected pace in January 2021 due to sharp lockdown measures implemented in Queensland state, which blunted a rise in retail sales in other states and territories. According to an Australian Bureau of Statistics report released on 19 February 2021, preliminary retail sales in January 2021 rose by 0.6% from December 2020, coming below the median estimate of a 2% gain. Queensland dropped by 1.5% in January 2021, while New South Wales rose by 1%. Australia’s relative success in handling its COVID-19 pandemic resulted in a rapid rebound in household and business sentiment, boosting economic activity and hiring. Unemployment fell from a peak of 7.5% during the pandemic to 6.4% in January 2021, due to fiscal and monetary stimulus measures.