CARI Captures Issue 490: 45% of ASEAN’s population to be threatened by climate change by 2030. 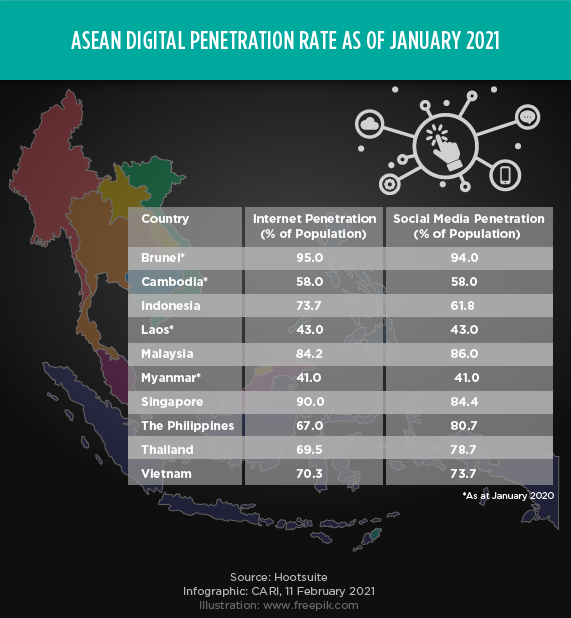 ASEAN
45% of ASEAN’s population to be threatened by climate change by 2030
(7 February 2021) An estimated 90 million people will move to cities in Southeast Asia by 2030. Urban residents will compose 45% of ASEAN’s population, including millions of people living in vulnerable areas along river banks, canals and hillsides, where they will be exposed to the harmful effects of environmental damage. This vulnerable portion of the ASEAN population is expected to increase by 50% in the region’s major cities. In 2019, the United Nations (UN) Secretary-General issued work plans for infrastructure and cities to ensure carbon neutrality by 2050, decarbonisation of the transport sector, localised/decentralised finance, resilient and zero-carbon buildings standards and codes, and urban climate resilience for the most vulnerable. The UN Under-Secretary-General and Executive Secretary of the UN’s Economic and Social Commission for Asia and the Pacific (ESCAP) noted that “smart grids and district energy solutions, or real-time traffic management, to waste management and water systems, and smart technologies will enable our future cities to operate more effectively.” The ASEAN Smart Cities Network (ASCN), which is designed to mobilise smart solutions throughout Southeast Asia, currently consist of more than 20 cities, which are developing their own urban visions through smart technologies.

CAMBODIA, ASEAN
Cambodian Trade with ASEAN up by 22% in 2020 despite COVID-19; digitalisation of customs applications under the ASEAN Single Window (ASW) to further facilitate trade
(10 February 2021) The value of trade between Cambodia and other ASEAN Member States skyrocketed in 2020, hitting US$11.330 billion even with flight and border restrictions due to the COVID-19 pandemic. With neighbouring Thailand and Vietnam accounting for the largest trading partners, 2020’s total trade value saw a 22.42% increase from the US$9.254 billion posted in 2019. Exports comprised chiefly agricultural products such as paddy, cassava, corn and rubber, and imports generally consisted of foods and beverages, diverse consumer goods and construction materials. “While the country [Cambodia] is increasingly able to process a broad range of consumer goods, capacity is still limited, triggering a need for more imports, especially from neighbouring countries. We encourage more internationals to invest in the processing industry and improve domestic production capacity and ensure the quality to compete with imports and step up export,” said the Cambodia Chamber of Commerce vice-president. To further facilitate trade, the General Department of Customs and Excise of Cambodia (GDCE) said all Cambodian importers and exporters can now apply for ASEAN Customs Declaration Documents (ACDD) electronically through the ASEAN Single Window (ASW). The documents will be recognised by authorities of the 10 ASEAN Member States, helping facilitate trade and customs clearance in the region.

MALAYSIA, INDONESIA
Malaysia and Indonesia agree in principle on Reciprocal Green Lane to enhance bilateral trade
(6 February 2021) Malaysia and Indonesia have agreed in principle to implement the Reciprocal Green Lane (RGL) scheme or, as known in Indonesia, a corridor travel arrangement to enhance bilateral trade. Malaysia’s Foreign Affairs Ministry secretary-general  stated, however, that a follow-up was required to fine-tune the necessary standard operating procedures (SOPs). He said the RGL is reserved only to facilitate travel for government officials and investors from both countries, and to enhance trade particularly in regard to high-value dealers. Indonesia is Malaysia’s ninth-largest trading partner globally and the third largest among ASEAN countries. In 2020, total trade reached US$16.37 billion, while Malaysia’s total investment in Indonesia is the latter’s second largest at US$1.04 billion.

MALAYSIA, SINGAPORE
Malaysia’s first health passport, IMMUNITEE, accepted in Singapore and expected to be launched in March 2021
(10 February 2021) Malaysia’s Immunitee Health Passport has partnered with Affinidi to become the country’s first health passport to be accepted in Singapore, via Affinidi’s Unifier digital credential platform. The Immunitee Health Passport is a system designed to store personal immunisation records and vaccine data, which helps to facilitate users’ clearance at border health checkpoints, ensure data protection and security through blockchain, and verify the authenticity of Covid-19 tests and vaccines.  Immunitee said the Unifier platform provided interoperability, enabling the secure sharing of necessary data with the various national health check systems being put in place globally. The CEO of Immunity stated that Immunitee had worked with recognised laboratories to automatically store users’ test history and implement a secure vaccine tracking and tracing programme to ensure that the vaccine is both authentic and stored at the right temperature. “This verification is done within the Immunitee app where the vaccine is scanned by the user before it is administered. Only vaccines that have been registered and tracked on the Immunitee system can be administered,”he stated. Scheduled to be launched in March 2021, Immunitee would be provided as an open-source system at no charge to governments and organisations around the world, and users may download the app free of charge.

INDONESIA
Indonesian sovereign wealth fund, LPI, is expected to commence activities within Q1 2021
(7 February 2021) Indonesia has moved  closer to appointing the supervisory board members and unveiling the board of directors for its sovereign wealth fund LPI. LPI is wholly owned by the Indonesian government. On 2 November 2020, it was given special authority to manage the investments of the Indonesian central government under the Job Creation (Omnibus Law) passed in 2020. LPI, which is also referred to as “Indonesia Investment Authority” or INA, is expected to commence its activities within Q1 2021. To have LPI up and running, the government has issued two government regulations. The first concerns state participation in LPI’s capital, and the other one regulates governance and operational matters. The government will inject US$1.07 billion into LPI, with additional capital to follow until it reaches US$5.37 billion by the end of 2021

THE PHILIPPINES
Central Bank relaxes rules on professional investment services to encourage public participation in financial markets
(10 February 2021)  The Philippine central bank, Bangko Sentral, said on 10 February that it was relaxing rules to make it easier for the public to have investments managed by professionals, as it seeks to broaden participation in the country’s financial markets. Investor participation in the Philippines, particularly in the stock market, has been rising but still extends only to a tiny portion of the population. According to the central bank, this will also deepen the retail investor base in the securities markets with the guidance of professional investment managers. Bourse data showed that The Philippines had 1.23 million stock market accounts, or less than 1% of the population, as of the end of 2019. Retail investors accounted for half of stock market trades in January 2021, reversing the historical dominance of institutional accounts.

SINGAPORE
Singapore unveils Green Plan 2030, outlines green targets for the next 10 years
(10 February 2021) On 10 February, the Singapore government unveiled the Singapore Green Plan 2030, a “whole-of-nation movement” to advance the national agenda on sustainable development. The plan, spearheaded by the Ministry of Education (MOE), the Ministry of National Development (MND), the Ministry of Sustainability and the Environment (MSE), the Ministry of Trade and Industry (MTI) and the Ministry of Transport (MOT), charts Singapore’s green targets over the next 10 years. The plan follows the announcement by Senior Minister Teo Chee Hean in February 2020 that Singapore wanted to halve its 2030 peak greenhouse gas emissions by 2050, to achieve net-zero emissions “as soon as viable in the second half of the century”. Some new initiatives under the plan include requiring all new car registrations to be cleaner-energy models from 2030, and more than doubling the targeted number of electric vehicle charging points by 2030. The plan also builds on Singapore’s 2030 aim to reduce the waste sent to  landfills by 30%, aiming for a 20% reduction by 2026. The Green Plan will be a “living plan”, said the ministries in the release, evolving as they develop and refine Singapore’s strategies. It will take into account technological developments, and incorporate a “continuous national engagement” process. More details on the Green Plan will be released at the upcoming Budget announcement on 16 February, as well as during the Committee of Supply Debate in Parliament.

JAPAN, MALAYSIA
Petronas and Japan’s Jera collaborate to produce ammonia for power
(9 February 2021) Petroliam Nasional Bhd (Petronas) and Japan’s largest power generation company, Jera, will be collaborating to produce ammonia for power. Both companies will work on producing ammonia through electricity generated from renewable energy such as hydropower to eliminate CO2 emissions. Nikkei Asia reported that the companies plan to begin a demonstration experiment in 2021 in which coal and ammonia will be mixed and used as fuel at a thermal power plant in Aichi Prefecture, located in central Japan. By the 2040s, Jera hopes to operate power generation equipment that will only need ammonia as fuel. Petronas also announced in November 2020 of its target to achieve net-zero carbon emissions by 2050. This is part of its holistic approach to sustainability that balances environmental, social and corporate governance considerations.

NEW ZEALAND
New Zealand seeking urgent clarification from China as seafood exports from two of its seafood facilities suspended
(10 February 2021) New Zealand said on 10 February that it was urgently seeking clarification from Chinese authorities after being informed that exports from two of its seafood facilities have been suspended. Exports from a Sanford facility that processes mussels and Sealord Group facility that processes finfish and fishmeal for animal feeds were suspended, New Zealand’s Ministry for Primary Industries (MPI) said in a statement. “This issue does not relate to COVID-19 transmission, but concerns matters raised following an audit of two processing premises,” said the Deputy Director-General Policy and Trade at MPI. New Zealand has taken strong measures to prevent the spread of COVID-19 and does not have community transmission, she stated . Ties with New Zealand have not been affected, and Beijing signed an upgraded free-trade deal with New Zealand in January 2021 that gave exports from the Pacific nation greater access to the world’s second-largest economy. China is now New Zealand’s largest trading partner, with annual two-way trade of more than US$21.58 billion. According to local media reports, around 35% of New Zealand’s seafood is exported to China.

SOUTH KOREA
South Korea unemployment rate hits 21-year high, jumping to 5.4% in January 2021
(9 February 2021)  South Korea’s jobless rate surged to its highest in more than two decades, raising concerns that the country’s export-driven recovery might be only surface level . The unemployment rate jumped to 5.4% in January 2021 from a revised 4.5% in December 2020,  hitting its highest level since the aftermath of the Asian financial crisis of 1998. Korea’s job market took a turn for the worse in December 2020 as the government tightened its social distancing rules as daily infection cases rose to above 1,000. More fiscal stimulus under consideration may backstop workers and companies that have suffered from forced restrictions. The government is in the process of handing out its third-round of cash support as part of its pandemic relief measures, and the possibility of a fourth-round has been floated.