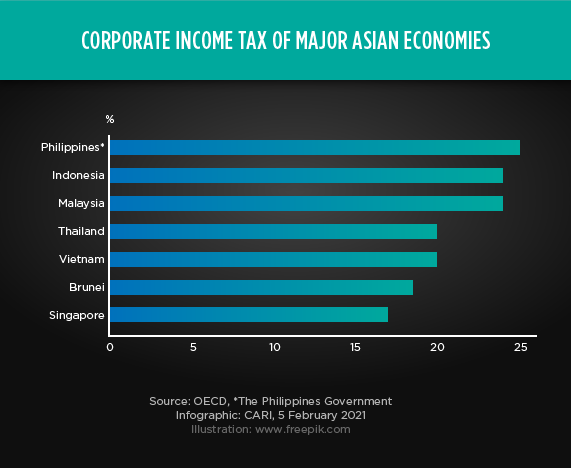 THE PHILIPPINES
The Philippines to cut corporate tax rate to 25% for big companies to aid COVID-19 recovery
(03 February 2021) The Philippines will cut its corporate tax rate for big companies from 30% to 25%, and to 20% for smaller companies, to help the country recover from the COVID-19 pandemic. The House of Representatives ratified the final version of the Corporate Recovery and Tax Incentives for Enterprises Act (CREATE) on 03 February 2021, and it will be forwarded to President Rodrigo Duterte for signing after it is ratified by the Senate. An earlier version of CREATE had been filed in 2018, but its passage had faced difficulties amid opposition from foreign companies. The Philippines reported a contraction of 9.5% in 2020, making it one of the worse affected economies in the region. CREATE also grants longer tax holidays for businesses located outside Metro Manila, to encourage greater development outside the national capital region and economic centre.

SINGAPORE
38% drop in Singaporean businesses venturing overseas in 2020 due to COVID-19 pandemic
(05 February 2021) According to Enterprise Singapore, there was a 38% drop in Singaporean businesses venturing overseas in 2020, largely due to global travel restrictions caused by the global pandemic. The number of local businesses which ventured overseas dropped to 1,600, and they largely did so through virtual trade fairs and online networking events. They also tapped on e-commerce platforms to market and sell their products and solutions. China and Southeast Asia remained the top markets of interest for Singaporean firms. Enterprise Singapore also noted that 14,800 businesses embarked on projects to improve productivity and upgrade capability, a 78% increase from the previous year.

THAILAND
Bank of Thailand holds benchmark interest rate steady to allow fiscal policies to lead the economic recovery
(03 February 2021) On 03 February 2021, The Bank of Thailand had held its benchmark interest rate steady at an all-time low of 0.5% as Thailand allows fiscal policies to take the lead in the economy’s recovery from the global pandemic. The central bank is prepared to use additional monetary policy tools and is assessing the need for new measures in the foreign exchange market. Thailand is currently grappling with a new outbreak of COVID-19 which began in December 2020, forcing the Finance Ministry to cut its 2021 GDP growth forecast to 2.8% from the 4.5% growth it predicted in October 2020. In December 2020, the central bank also cut its GDP outlook for 2021 to 3.2%. The government unveiled a new series of stimulus measures in January 2021 to counter the outbreak.

VIETNAM
The new five-year economic blueprint calls for private companies to account for more than half of the economy by 2025
(31 January 2021) Vietnam’s recently concluded national party congress approved a new five-year economic blueprint which called for an increase of private companies ownership to account for more than half of its economy by 2025 (from 42% now). The new blueprint also plans to double per-capita GDP to US$4,700-US$5,000 by 2025, from US$2,750 at the end of 2020. Recently re-elected general-secretary of the Communist Party of Vietnam, Nguyen Phu Trong, stated that the country would continue its push for strong economic growth through further domestic business environment reforms, as well as maintaining its tough anti-corruption campaign. The government is also expected to continue to pursue open trade and investment policies.

MALAYSIA
Malaysian government to toughen enforcement of COVID-19 restrictions measures as Chinese New Year approaches
(04 February 2021) The Malaysian government will toughen its enforcement of COVID-19-related restrictions as the country enters its fourth week of a six-week lockdown (referred to as a Movement Control Order, or MCO). Businesses which do not comply with health guidelines will be shut down, while the Malaysian Army will be provided with powers to make arrests and to help other agencies carry out operations against illegal immigrants and address breaches of COVID-19 SOPs. The government also plans to raise fines for repeat offenders of the lockdown, as well as imposing jail term for selected offences. The government announced more stringent protocols for the upcoming Chinese New Years holidays, including banning house-to-house visits and limiting prayers at temples.

AUSTRALIA
Australia to maintain its mandatory two-week quarantine for all overseas visitors
(05 February 2021) Australia stated it will be maintaining its mandatory two-week quarantine for all overseas visitors to the country, despite the vaccine rollout taking place in February 2021. Australia has closed its borders from the rest of the world for almost a year, with most non-citizens barred from entering the county and strict caps implemented on the number of residents that are allowed to return each day. All arrivals to the country must undergo a two-week self-paid hotel quarantine. A few thousand short-term visitors now enter Australia monthly, down from more than one million before the COVID-19 pandemic began. Australia’s Chief Medical Officer noted that although preliminary data shows the AstraZeneca vaccine does reduce transmission of the virus, this was not enough for Australia to open its borders.

JAPAN, THAILAND
Thai energy conglomerate PTT ships liquified natural gas to Japan for the first time in January 2021
(05 February 2021) Thai state-owned energy conglomerate PTT had shipped liquified natural gas (LNG) to Japan for the first time in January 2021. Thailand is currently experiencing a glut in LNG due to a lack of winter heating demand and the COVID-19 pandemic, the latter of which has impacted manufacturing. The Thai government is hoping to transform the country into an international LNG trading hub, and to re-export excess LNG to other countries such as Japan, South Korea, China, and Taiwan for when domestic demand is low. PTT buys LNG from Malaysia and Qatar mostly under long-term contracts. Projecting more domestic demand for electricity, Thailand plans to increase procurement and is expanding its import terminals, with a second facility slated for completion by 2022.

SOUTH KOREA
South Korea to partially lift restrictions on short-selling from 03 May onwards
(03 February 2021) South Korea will partially lift its restrictions on short-selling from 03 May 2021 onwards. Following criticisms from hedge funds and other financial institutions against a year-long ban that is set to expire on 15 March, South Korea will now allow the short-selling of large-cap shares, including stocks on the KOSPI 200 Index and the junior KOSDAQ 150 Index. The local stock market had staged a strong recovery from 2020 and was trading at near-record levels on the back of heavy retail trading. Short selling for more than 2,000 companies listed on the market will continue to be prohibited. South Korea is only one of two major Asia-Pacific economies which restricts short selling, alongside Indonesia. Hedge funds claimed restrictions on short-selling made little sense as retail investors account for two-thirds of daily turnover on the country’s US$2 trillion stock market. 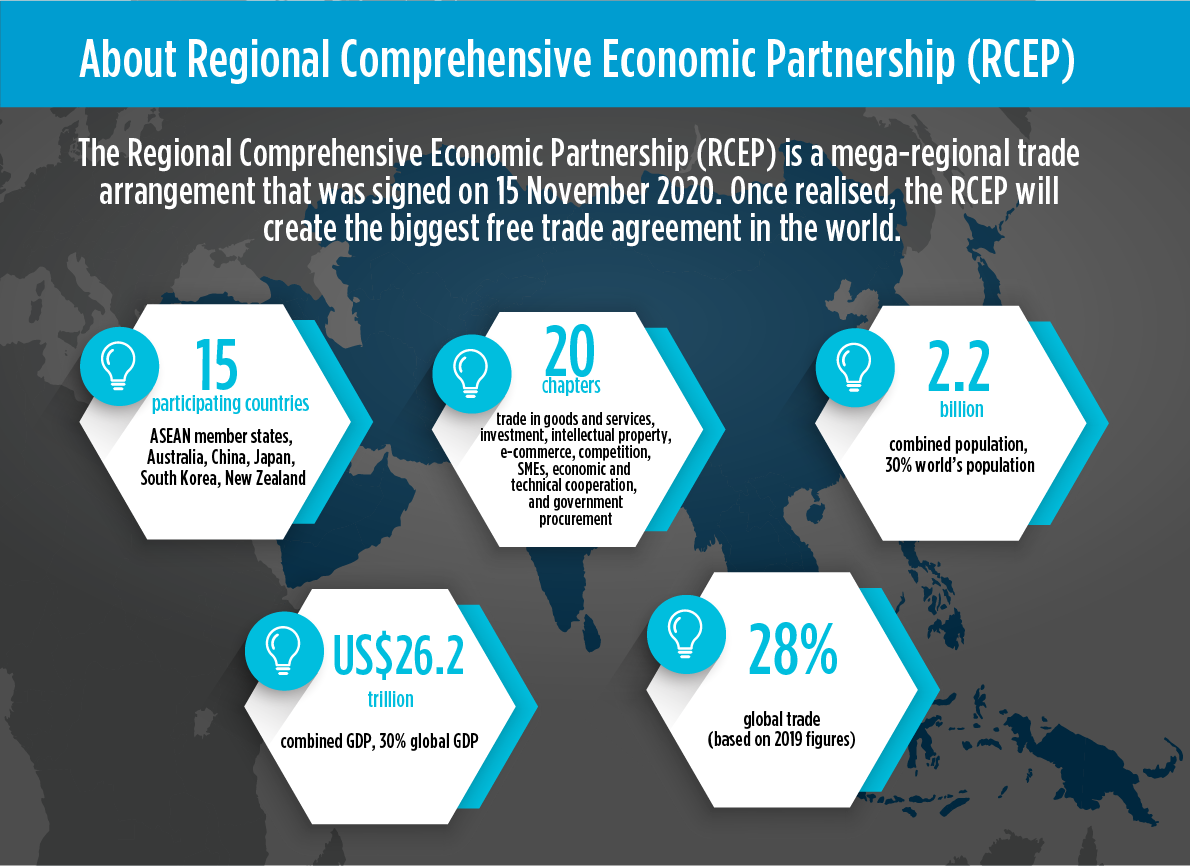