Home / News & Views / CARI Captures Issue 482: ASEAN and the European Union have formally elevated their relationship to a strategic partnership

CARI Captures Issue 482: ASEAN and the European Union have formally elevated their relationship to a strategic partnership 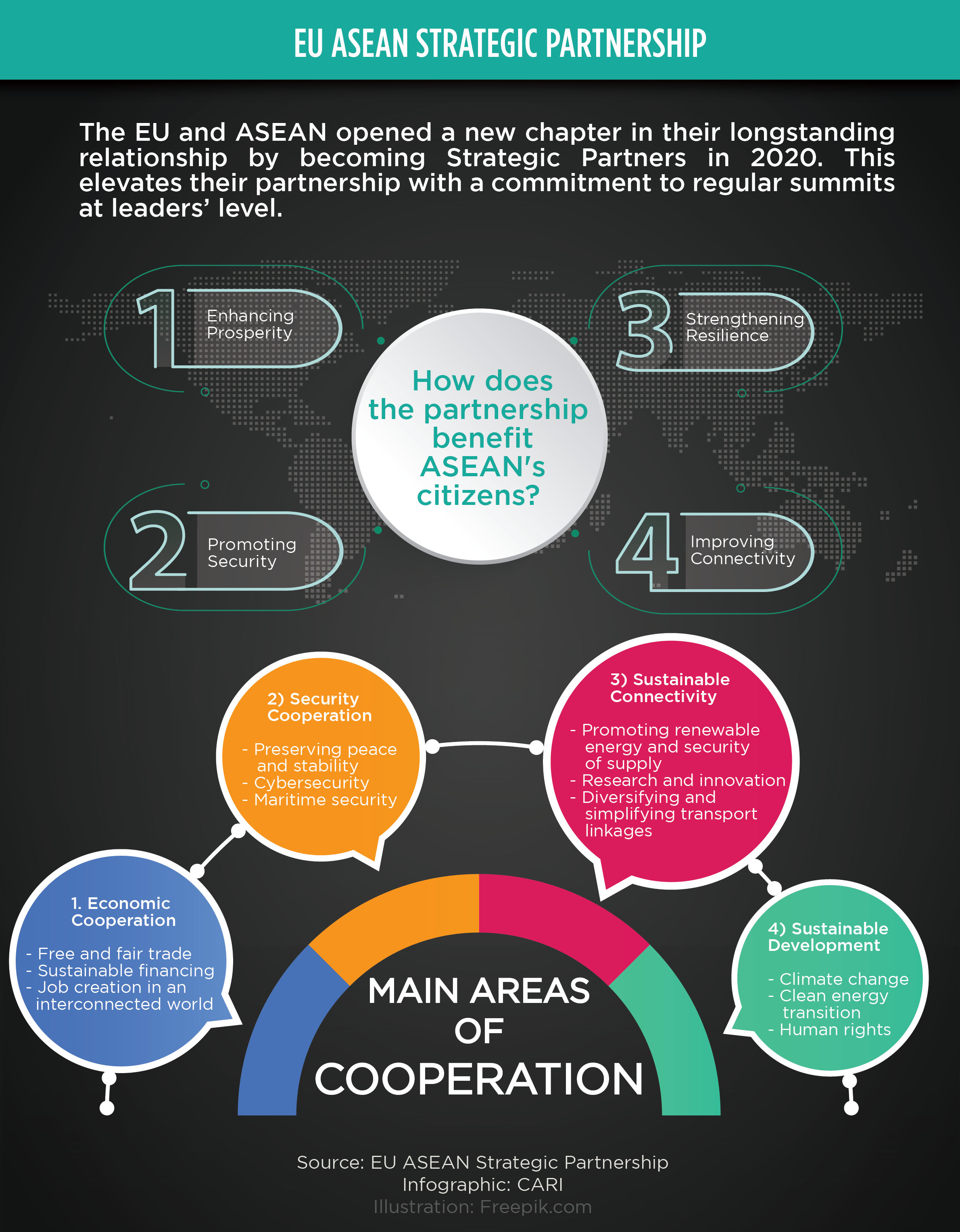 Asean and the European Union have formally elevated their relationship to a strategic partnership
(01 December 2020) On 01 December 2020, the EU and ASEAN agreed to upgrade their relationship to a strategic partnership, thus committing both parties to regular summits at the leaders level. The German Foreign Minister stated that both parties will ‘stand up for safe and open trade routes’, as well as ‘free and fair trade’. He also stated that both parties collectively represent about 1 billion and almost 25% of global economic power. According to a factsheet released by the EU in tandem with the announcement of the partnership, among the main areas of cooperation between both parties include economic cooperation, security cooperation, sustainable connectivity, and sustainable development.

Divergence of manufacturing data correlates with bond-market performance in ASEAN
(04 December 2020) The divergence of recent purchasing managers indexes (PMI) data for the ASEAN countries of Indonesia, Thailand, the Philippines, and Malaysia has largely correlated with their bond-market performance. PMI data published this week were both above the 50 point threshold, indicating manufacturing expansion. For Indonesia, their numbers have risen for six of the past seven months, while the data for Thailand has signalled growth for two straight months for the first time in 2020. Their positive PMI readings correlate with their debt performance, with Indonesian bonds returning 10% this quarter to dollar-based investors, while Thai bonds saw returns of 5%. On the other hand, poor PMI numbers for Malaysia and the Philippines have correlated with their poor bond performance, with Malaysian and Filipino debt returning only 1.6% this quarter (currently the worst performers in Asia).

US tech giants shift investment focus on Indonesian unicorns
(04 December 2020) Google, Amazon, Facebook, Apple and Microsoft (GAFAM) are increasingly shifting their investment focus to Indonesia. Indonesia’s internet economy is believed to have grown more than fivefold in five years to reach US$44 billion in 2020, and is expected to reach US$124 billion by 2025. In November 2020, Microsoft announced it had taken part in a US$100 million funding round for Indonesian e-commerce platform Bukalapak. Between late October and early November 2020, Google had reportedly invested into e-commerce platform Tokopedia, following Facebook's and PayPal's cash injections into ride-hailing company Gojek in June 2020. For Indonesian unicorns, US tech investments provide a welcome development in light of the increased need for capital in light of the COVID-19 pandemic. For the GAFAM firms, investments into unicorns provide a window into the Indonesian market without having to develop local operations organically.

The Philippines government lowers growth outlook for the economy in 2020 to between 8.5%-9.5%
(03 December 2020) The Philippines government lowered its growth outlook for the economy to 8.5% to 9.5%, significantly lower than the 4.5%-6.6% contraction predicted in July 2020. The economy is expected to pick up in the final three months of 2020. The economy is expected to grow by 6.5%-7.5% growth in 2021, and 8%-10% growth for 2022. The government also lowered 2020’s budget deficit ceiling to 7.6% of GDP, from the previous cap of 9.6%, based on stronger revenue forecasts. They also raised the deficit ceiling for 2021 and 2022 due to higher expected spending. Growth is expected to be boosted by 2022 due to both infrastructure investments and an expectation that all forms of quarantine will be lifted.

The Philippines considering subsidizing coronavirus tests to boost domestic tourism
(01 December 2020) The Philippines is considering subsidizing coronavirus tests for tourists to boost its tourism market that's gradually opening to domestic tourists. The government is considering shouldering as much as half the costs of COVID-19 tests for tourists. Travel vouchers for the subsidized tests from state-run Philippine General Hospital in Manila will be given to tourists, although it is unknown who can qualify for the tests. The tourism department is also moving to set up uniform requirements for entry to tourist destinations, as currently different travel protocols set up by local governments have been confusing. The tourism industry accounts for about 12.7% of the Philippines GDP in 2019.

Malaysian state of Sarawak to export liquefied petroleum gas to West Kalimantan province in Indonesia
(02 December 2020) The chief minister of the Malaysian state of Sarawak will supply liquefied petroleum gas (LPG) to West Kalimantan in Indonesia after both parties came to a formal agreement. The governor of West Kalimantan had reportedly written a letter to the Sarawakian Chief Minister to supply LPG to West Kalimantan, especially to the Indonesian villages near the Sarawak border. The Sarawak Chief Minister stated that without a regulatory procedure for Sarawak to sell LPG to Indonesia, then smuggling would take place. The Sarawak state government, through its wholly-owned Petroleum Sarawak Berhad (Petros), must make formal arrangements for the supply of LPG with the West Kalimantan authorities. The Sarawak state government is currently negotiating with the Malaysian federal government and state-owned oil company Petroliam Nasional Berhad (Petronas) for Petros to take an active role in the exploration of oil and gas within the state.

Annual inflation in November 2020 rose 3.3% year-on-year; reaching highest level in 20 months
(04 December 2020) Annual inflation in the Philippines for the month of November 2020 rose by 3.3% year-on-year; reaching its highest level in 20 months as a series of typhoons impacted food supplies and drove prices higher. This was above the central bank’s projected range of 2.4%-3.2% for the same month. Core inflation, which excludes food and fuel prices, rose by 3.2% in November 2020 from 3.0% in October 2020. In the January-November 2020 period, inflation averaged at 2.6%, below the midpoint of the official 2%-4% target range for 2020. Weak domestic demand due to the impact of COVID-19 restrictions and consumers’ reluctance to spend are expected to keep inflation largely in check. The Philippines central bank has cut interest rates five times in 2020, and has not ruled out further rate cuts.