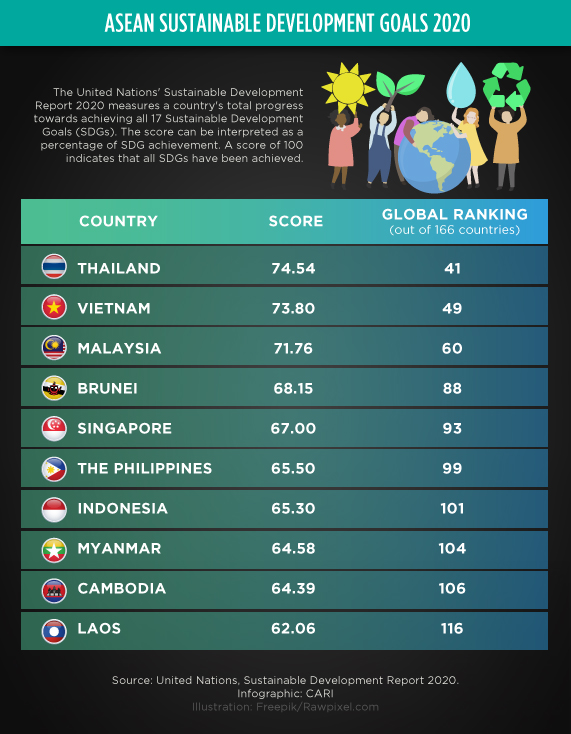 Development of green economy offers annual US$1 trillion economic opportunity for ASEAN
(26 November 2020) A recent report by Bain & Company estimated that accelerating the development of the Southeast Asian green economy would offer a US$1 trillion economic opportunity annually for ASEAN businesses by 2030. It was noted that there is a gap between where Southeast Asia is now compared to other regions in terms of their green initiatives. Among the sectors of the green economy which Bain & Company believe Southeast Asia could become a global leader in include sustainable energy and resources, healthy and sustainable food systems, efficient and low carbon supply chains, building green cities, and setting up green financing and liquid carbon markets. As part of Bain & Company’s continued efforts to drive global sustainability transformation, the company set up a Global Sustainability Innovation Centre (GSIC) in Singapore, with the support of the Singapore Economic Development Board (EDB).

Indonesia approaches US private equity firms to invest into new sovereign wealth fund
(26 November 2020) During a visit to the United States last week, Indonesia’s minister of maritime affairs and investment approached several US private equity firms to invest into the Indonesia Investment Authority, Indonesia’s new sovereign wealth fund. The fund is hoping to raise up to US$15 billion, and will invest in infrastructure such as toll roads and electricity networks. Among the US firms approached included Blackstone, Carlyle, EIG Partners, Global Infrastructure Partners, Stonepeak, I Squared Capital and JPMorgan. As well, the US International Development Finance Corporation (DFC) could possibly inject some US$2 billion into the fund. Indonesia is also reportedly approaching the Japan Bank for International Cooperation and the Abu Dhabi Investment Authority.

Record policy rate cuts by central bank having little impact on borrowing rates of Indonesian banks
(26 November 2020) Although the Indonesian central bank has cut its key rate by 225 basis points since June 2019 to a record-low of 3.75%, this has had little impact on the borrowing rates charged by Indonesian banks. For comparison, PT Bank Central Asia, Indonesia’s largest lender by market value, eased rates for customers by only about 100 basis points during the same period. This is reportedly due to low demand among consumers for new loans, with loans shrinking 0.47% year-on-year in October 2020 (the first time on record). Indonesians are limiting their spending and businesses are delaying their investments as the country grapples with its COVID-19 pandemic. As well, banks are also hesitant to lend due to a relatively high level of non-performing loans as consumers and businesses struggle to repay debts, as well as ongoing loan restructurings.

Malaysian government passes US$78 billion budget for 2021; largest in nation’s history
(26 November 2020) On 26 November, 2020, Malaysia’s parliament passed the 2021 budget, which has a spending plan of US$78 billion. This makes it the largest budget in Malaysia’s history. The supply bill will enter the ‘committee stage’ on 30 November, 2020, as the lower house will scrutinize each portion of the bill and several more rounds of voting take place. If the budget is not approved before 15 December, 2020, only about 20% of the original budget allocated for pensions and debt servicing can be spent without legislative approval. Malaysia’s main equities index closed at its highest level in 2020 after the budget was passed, and the ringgit rose to its highest level against the dollar in 10 months. Sovereign bonds also held losses. Among the proposals included in the budget were automatic moratoriums on loan repayments for the poorest 40% of the population, aid to farmers, and allowances for fishermen.

The Philippines central bank to greenlight digital banks to drive financial inclusion in country
(26 November 2020) The Philippines central bank stated on 26 November, 2020, that it will allow the establishment of digital banks to help drive financial inclusion in the Philippines, where only roughly 30% of the population have bank accounts. The central bank created a new license category for banks that offer ‘financial products and services that are processed end-to-end through a digital platform and/or electronic channels with no physical branches.’ To be eligible for the new license category, digital bank will be required to have a minimum capitalization of US$20 million. They will also have to maintain a head office in the Philippines. The central bank stated that digital banks will help in realizing their target of at least 50% of total retail payment transactions shifting to digital, as well as 70% of adult Filipinos having transaction accounts by 2023.

The Philippines offering corporate income tax cuts and structural reforms to woo foreign investors
(25 November 2020) The Philippines plans to attract foreign investors through corporate income tax cuts and structural reforms. A bill currently pending in the Senate would cut corporate tax rates from 30% to 25% at the start, and eventually to 20%. The bill also seeks flexibility in granting fiscal and other incentives to attract high-value investments. A Board of Investments campaign to attract foreign investors is focused on particular sectors including automotive, aerospace, electronics, copper-nickel products, and IT and business process management. The Philippines is currently undergoing a recession in 2020 as it grapples with the second worse COVID-19 pandemic in Southeast Asia.

33 venture capital firms to invest some US$800 million into Vietnamese tech startups over next three to five years
(26 November 2020) At the Vietnam Venture Summit 2020, part of The Vietnam Tech and Startup Week, 33 venture capital firms from South Korea, Japan, Singapore, Indonesia, and Vietnam made a commitment of US$800 million to be invested into Viet Nam’s tech startups. This figure is comparable to the US$861 million invested in Vietnamese tech startups in 2019. Investment proceeds in the first half of 2020 had decreased by some 22% year-on-year to US$222 million due in part to the COVID-19 pandemic. Viet Nam is expected to benefit from the ongoing trade tensions between the US and China, as foreign manufacturing and investments shift away from China.

Ministry of Finance propose extension of fuel tax cut through 2021 to help aviation industry
(24 November 2020) Viet Nam’s Ministry of Finance is proposing Viet Nam’s Prime Minister extend a 30% cut in the jet fuel environmental tax through to 2021 to help struggling airlines. Viet Nam’s National Assembly had earlier in 2020 approved a cut in the jet fuel tax from US$0.13 per liter to US$0.09, which would last from August to December 2020. Extending the tax cut to 2021 is expected to reduce government tax revenue by about US$43,076.91. The proposal to extend the tax cut follows the National Assembly’s approval earlier in November 2020 to provide financial support to national carrier Vietnam Airlines JSC through loan guarantees and allowing the government investment arm State Capital Investment Corp., to invest in the carrier.