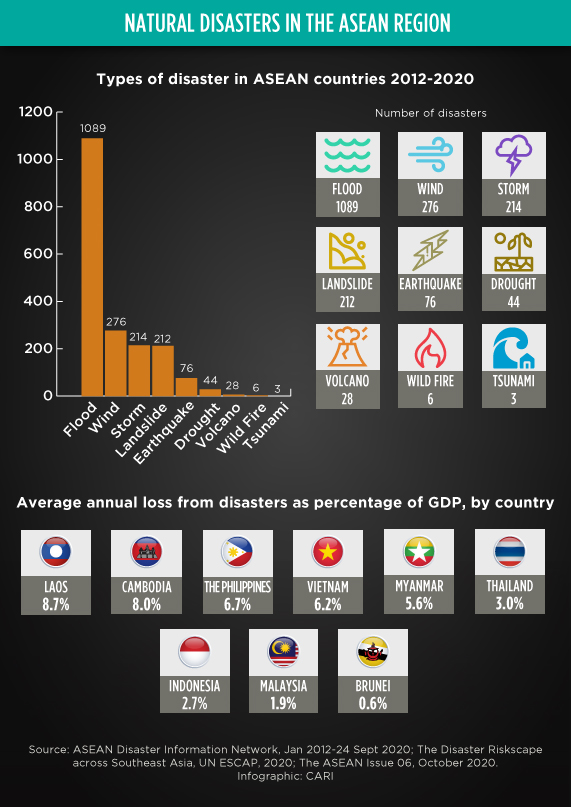 Southeast Asia’s internet economy projected to exceed US$100 billion in 2020
(13 November 2020) Philippine President Rodrigo Duterte has urged ASEAN to intensify its fight against climate change. The calamities faced by the Philippines is “a stark reminder of the urgency of collective action to combat the effects of climate change,” he said at the 37th ASEAN Summit on 12 November. According to the National Disaster Risk Reduction and Management Council, super typhoon Rolly battered Bicol and Southern Luzon on 1 November, killing 24 people and leaving more than US$352 million (P17 billion) in damage to infrastructure and agriculture. Duterte urged ASEAN countries to further enhance cooperation on disaster risk reduction management and to reinforce capacities. He also called on countries to amplify their voices to demand climate justice from developed countries. Duterte said developed countries must deliver their commitment to finance and invest in innovative adaptation solutions so that developing countries would have a fair shot at progress and sustainable development.

ASEAN MOU on essential goods enters into force
(13 November 2020) A memorandum of understanding (MOU) signed by the Association of Southeast Asian Nations (ASEAN) on 12 November to ensure the smooth flow of essential goods and prevent supplies disruption during the COVID-19 pandemic took effect on 13 November. The MOU includes a list of 152 essential goods, consisting mostly of medical goods such as test kits and equipment. It is based on a list jointly drawn up by the World Trade Organization (WTO) and World Health Organization (WHO). The memorandum is part of the Hanoi Action Plan on strengthening supply chain connectivity adopted in June 2020. It commits ASEAN member countries to refrain from imposing restrictive trade measures on essential goods and supplies except for public health emergencies. ASEAN Secretary-General Lim Jock Hoi said that the MOU proves ASEAN’s unanimous cooperation to facilitate the smooth flow of essential goods in the region.

Cambodia and South Korea begin fourth round of FTA negotiation
(18 November 2020) Cambodia and South Korea began the fourth round of negotiations on a bilateral free trade agreement (FTA) on November 18. Cambodian Ministry of Commerce spokesman Seang Thay told a local news outlet that the talks are expected to conclude on 20 November. The first round of negotiations was held in July, the second from 31 August to 2 September, and the third ended on 8 October. Minister of Economy and Finance Aun Pornmoniroth told a closed-door meeting in early October that the two sides are determined to conclude FTA talks by the end of 2020. According to a South Korean news agency, the latest round would focus on general rules, rules of country, customs clearance, and market access. Ministry of Commerce spokesman Pen Sovicheat said the two sides continued to scrutinise over the more technical aspects of the agreement to ensure mutual benefits.

Indonesia and the US sign US$750 million trade and infrastructure agreement
(19 November 2020) Indonesia and the US have signed a US$750 million agreement to finance trade and infrastructure projects as part of efforts to strengthen their economic partnership. The Indonesian Ambassador to the US, Muhammad Lutfi, stated that the agreement was part of efforts to expand cooperation in investment and the procurement of goods and services, as well as expand opportunities for both parties to work together on government projects and business development in infrastructure, transportation, and energy. Both Indonesia and the US exchanged US$19.72 billion in goods between January and September 2020, a 1.85% year-on-year decline. US companies also invested US$480.1 million in 1,024 Indonesian projects within the same period, making Indonesia the eighth-highest beneficiary of private US funds.

(13 November 2020) Thailand plans to add Singapore to its regional energy grid by 2023, along with Cambodia and Myanmar, said permanent secretary for energy Kulit Sombatsiri. The move comes after the success of a Laos-Thailand-Malaysia energy deal, in which Thailand buys electricity from hydroelectric power plants in Laos and sells it to Malaysia through transmission lines operated by the state-run Electricity Generating Authority of Thailand (Egat). The plans are expected to be discussed for approval by regional policymakers through teleconference, hosted by Vietnam, next week as part of the ASEAN Sustainable Energy Week. In 2019, ASEAN energy ministers agreed that Egat could sell 300MW to Malaysia. The deal with Singapore would allow Thailand to sell 100MW to the island state. However, if the deal is approved, Egat would still need to compete with local energy-producing firms under Singapore’s free trade model, said Thailand’s chief of the Energy Policy and Planning Office’s Power Policy Division Veerapat Kiatfuengfoo.

Singapore could still have COVID-19-related restrictions for more than a year
(19 November 2020) Singapore could be living with COVID-19-related restrictions for more than a year, as it enters Phase 3 of pandemic easing measures. Under this phase, maximum gatherings outside homes could increase from five to eight, while restrictions such as wearing masks and safe distancing will continue. Further easing will depend on the availability of an effective vaccine and capacity for testing. Singapore has entered into supply agreements with several vaccine companies to build a “portfolio of vaccines” which will be trialled and tested before being distributed to the population. Groups such as the elderly, frontline workers, and vulnerable groups will be prioritised for the vaccine.

Government plans to cut approval time for COVID-19 vaccines
(19 November 2020) The Philippines government plans to cut the approval time for COVID-19 vaccines already approved by other nations in order to fast track their use among high-risk individuals in the country. President Rodrigo Duterte issued an order for the country’s Food and Drug Administration to cut the approval process from six months to three weeks. Duterte also agreed to pay vaccine makers in advance, with the private sector pledging to buy at least 1 million doses. Authorities had earlier suggested that the Philippines may join clinical trials for vaccines from Russia and China in 2020.

The Philippines’ central bank cuts its interest rate by 25 basis points to 2.0%
(19 November 2020) The Philippine central bank cut its interest rate by 25 basis points to 2.0%, bringing the total rate reduction in 2020 to 200 basis points. Bangko Sentral ng Pilipinas (BSP) also implemented credit relief and other liquidity measures in response to the COVID-19 pandemic amid limited fiscal stimulus. BSP governor Benjamin Diokno has stated that fiscal stimulus will be key to reviving the economy and that monetary policy can’t do all the work alone. The Philippines’ GDP shrank by 11.5% in the three months to September 2020 compared to the same period in 2019. In the second quarter of 2020, GDP had shrunk by 16.9%. Although jobs are being restored as the economy reopens, consumer confidence remains low.

Bank of Thailand to ease capital outflows to temper a rallying currency
(20 November 2020) Thailand’s central bank, Bank of Thailand (BoT), intends to ease capital outflows to cool a rallying baht as it threatens Thailand’s post-COVID-19 economic recovery. The government has also called on the BoT to restrain the baht to protect the exports. The baht has been the second-best performer in Asia in November 2020 as foreign investors turned net buyers of almost US$2.4 billion worth of bonds and stocks as global demand returns for riskier emerging-market assets. The baht had recently rallied more than 8.0% from 2020’s low in April, hitting a 10-month high last week. With its borders continuing to be closed, Thailand is relying on trade to minimise the economic impact of the COVID-19 pandemic.

Brunei’s ASEAN chairmanship to focus on advancing post-pandemic recovery
(16 November) As ASEAN Chair for 2021, Brunei will continue to advance regional post-pandemic recovery and community-building efforts, said Sultan Hassanal Bolkiah, speaking from Bandar Seri Begawan. Brunei will take over the ASEAN chairmanship in 2021, after Vietnam handed over the symbolic gavel at the close of the 37th ASEAN Summit in Hanoi on 15 November. The sultan unveiled the theme for Brunei’s 2021 chairmanship, “We Care, We Prepare, We Prosper”, which reflects the three priority areas the country plans to promote, which are: a caring community, preparation for the future, and prospering together as a region. Brunei has yet to announce how ASEAN-related meetings will take place in 2021, whether the meetings would be held virtually or in-person. ASEAN leaders signed a declaration on 12 November agreeing to the establishment of a travel corridor in 2021 but the feasibility of regional travel by next year remains unclear, with the pandemic at different stages in ASEAN member countries.