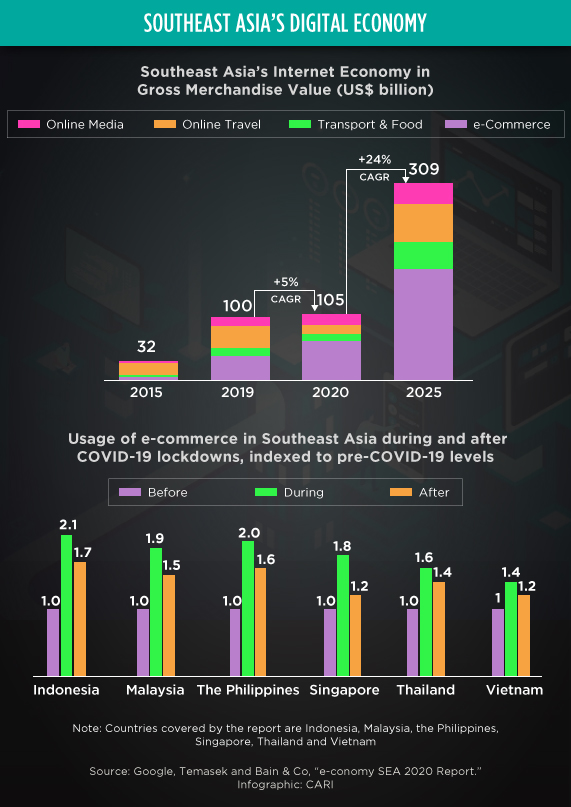 ABIS: China to deepen ties with ASEAN while ESG investment is the way forward
(13 November 2020) China will continue to strengthen its relationship in ASEAN, said Chinese Premier Li Keqiang at the ASEAN Business and Investment Summit 2020 (ABIS) held on 13 November. He noted that China-ASEAN’s trade went up in the first three quarters of 2020 while Chinese investment in ASEAN countries surged more than 70% year-on-year. China has unveiled its 14th Five Year Plan but Li said that China is also developing its next five-year plan to deepen its relationship with ASEAN in business, investment and other areas. Also speaking at ABIS, Malaysian Prime Minister Muhyiddin Yassin emphasised the importance of ESG (Environmental, Social, and Governance) principles in the region’s investment landscape going forward. He added that ESG is an important element in global and regional policy frameworks and is part of Malaysia’s Shared Prosperity Vision 2030. A more responsible investing culture covering vital areas such as climate change and the environment can facilitate a more sustainable economic integration for ASEAN.

RCEP trade pact to be signed at 37th ASEAN Summit
(12 November 2020) Fifteen Asia-Pacific nations, including ASEAN countries, are set to sign the Regional Comprehensive Economic Partnership (RCEP) at the 37th ASEAN Summit that began on 12 November 2020. According to analysts, once signed, the RCEP will be the world’s largest trade pact in terms of GDP. Vietnam’s Prime Minister Nguyen Xuan Phuc also confirmed the pact would be signed this week during opening remarks at the online summit. India had been expected to sign the trade deal but pulled out in 2019 over concerns about cheap Chinese goods entering the country, though it can join at a later date if it reverses its position. The pact’s expected signing comes as the 10 members of the Association of Southeast Asian Nations (ASEAN) fight to mitigate the crippling cost of COVID-19, which has ravaged their economies and left many battling a severe public health crisis.

Government says “worst is over” as economy shrinks in Q3 2020
(10 November 2020) The Philippine economy contracted by more than expected on an annual basis in the third quarter of 2020 due to the COVID-19 pandemic, but the fallout eased after the government gradually lifted COVID-19 restrictions, according to official data released on 10 November. The Philippines’ stringent lockdowns earlier this year tipped the economy into its first recession in nearly 30 years during the April-June period. Its GDP shrank 11.5% year-on-year in the third quarter of 2020. However, the GDP grew a seasonally adjusted 8% quarter-on-quarter during the July-September period as the government gradually lifted restrictions in mid-May to help ease the economic pain. That was a big improvement on a previously reported 15.2% contraction in the second quarter of 2020. But the Philippine economy is still expected to experience a full-year contraction in 2020 as it struggles to get the virus under control at home while a resurgence of cases in Europe and the US threatens a global economic recovery.

More than 10 million SMEs in Indonesia now use online platforms
(9 November 2020) The number of small and medium enterprises (SMEs) using online platforms for their business in Indonesia has risen to around 10.2 million as the COVID-19 pandemic speeds up digitalisation, said Indonesian Cooperative and SMEs Minister Teten Masduki during a recent virtual discussion. Masduki said the share of SMEs using online platforms rose to 16% from 13% as recorded in early 2020. With such an increase, the Indonesian government has met its target of having 10 million small businesses utilising online platforms in 2020. The rise in online commerce among small businesses has occurred as many consumers moved to online shopping platforms to comply with the social-distancing orders during the pandemic. According to Indonesian Creative Economy and Tourism Minister Wishnutama, quoting data from Bank Indonesia, the volume of transactions on e-commerce in the country rose by around 39% to 383 million in the first and second quarters of 2020.

Indonesia projected to be world’s fourth-largest air passenger market by 2039
(12 November 2020) The International Air Transport Association (IATA) projected that Indonesia’s air passenger market would become the world’s fourth-largest by 2039, jumping from 10th position in 2019. This growth would be facilitated by Indonesia’s rising middle class, which has expanded over the last 15 years from just 7% of the population to 20% currently. Despite this, Indonesia saw an 18.5% year-on-year decline in domestic air passengers in 2019. For the year 2020, only an estimated 23.5 million passengers flew as of September 2020, or 58.3% lower compared to the same period last year. The Indonesian National Air Carrier Association projected that the number of air passengers by the end of 2020 to reach 45.8 million, a 40% drop from 2019.

New visa programme launched to attract global tech talent
(12 November 2020) Singapore will be issuing a new type of visa to attract 500 individuals with proven track records of being highly accomplished entrepreneurs and technical experts. Referred to as the Tech.Pass programme, the visa will allow qualified individuals to start and operate more than one company and become an investor, consultant or mentor for local startups. Under the current regulations, local companies must sponsor an employment pass for talents they want to bring in. To qualify for the visa, candidates must meet two of the three requirements before they can apply, which includes i) must have drawn a monthly salary of at least US$14,800, ii) have at least five years of experience leading a tech company with a valuation of US$500 million, or iii) at least five years of experience in developing a tech product that has at least 100,000 monthly active users or at least US$100 million in revenue.

Low inflation gives central bank room to cut reserve requirement ratios further
(11 November 2020) Low inflation in the Philippines has provided Bangko Sentral ng Pilipinas with room to cut reserve requirement ratios (RRRs) if need be, although current indicators suggest there’s adequate market liquidity. Policymakers in the central bank will meet on 19 November 2020, and the decision to cut the RRRs will depend on domestic liquidity and credit dynamics in the coming months. The central bank has already cut banks’ RRRs by 200 basis points to 12% in 2020, as part of a larger programme of enhancing liquidity in the system which included other measures such as looser reserve rules and bond buying. Financial system liquidity stood at US$35 billion as of 19 October 2020, exceeding a peak last seen in 2016.

Australia loans US$1.1 billion to help with Indonesia’s COVID-19 response
(12 November 2020) Australia is providing US$1.1 billion to Indonesia to help with the country’s COVID-19 response programme. The loan, which is repayable in 15 years, will be specifically used to support Indonesia’s budget financing for 2020. The agreement signed recognises the comprehensive strategic partnership between the two countries, while supporting the Asian Development Bank-led COVID-19 response and expenditure support programme. A joint statement by Australian Treasurer Josh Frydenberg and Indonesian Finance Minister Sri Mulyani Indrawati noted that Indonesia’s recovery and ongoing prosperity was critical to regional stability.

Myanmar’s election commission announces National League for Democracy win
(13 November 2020) Myanmar’s election commission announced on 13 November 2020 that the ruling National League for Democracy (NLD) had won at least 346 seats, taking more than 80% of the seats counted so far. The party had won more seats than its last election in 2015. However, the country’s other ethnic-based parties were reportedly doing poorly, with nine ethnic parties winning at least 41 seats so far. The military-affiliated Union Solidarity and Development Party had also garnered only 25 seats thus far. Parliament will hold a joint session in early 2021 to choose Myanmar’s next president. In their second term, the NLD will push for peace talks with ethnic groups within the country as well as constitutional reforms.