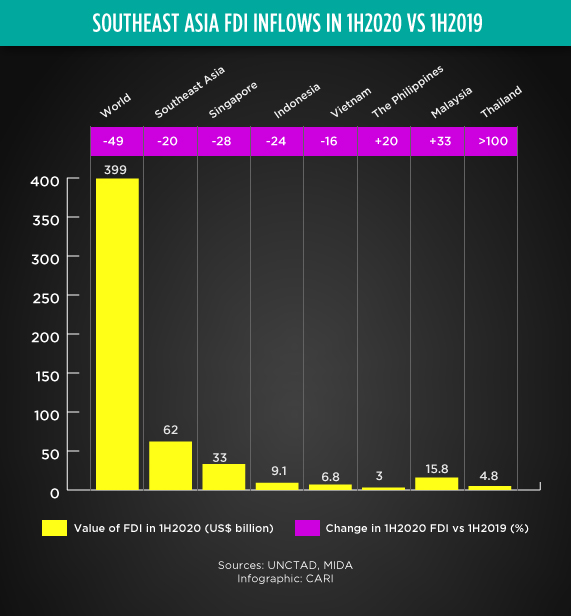 FDI in Southeast Asia fall by 20% in first half of 2020
(27 October 2020) Foreign direct investments flows to Southeast Asia in the first six months of 2020 fell 20% to US$62 billion, according to a report released by United Nations Conference on Trade and Development (UNCTAD). This was due to significant fall in flows seen by the regions three largest recipient countries: Singapore (-28%), Indonesia (-24%) and Vietnam (-16%). Meanwhile, the Philippines saw its FDI increase 20% to US$3 billion and Thailand’s FDI flows more than doubled to US$4.8 billion. No data from the UNCTAD report was available for Malaysia but data from the country’s investment body, Malaysia Investment Development Authority, showed that its FDI in the first six months of 2020 increased 33% to US$15.8 billion. In the first half of 2020, developing economies saw a smaller contraction in FDI (-16%) compared to developed economies (-75%) while global FDI fell 49% to US$399 billion.

Four ASEAN countries to sign cross-border power trading deal in November
(27 October 2020) Singapore is set to sign an agreement with Laos, Thailand and Malaysia at an ASEAN meeting in November to advance cooperation on cross-border power trading, Singapore’s second minister for Trade and Industry Tan See Leng said on 26 October. The memorandum of understanding for the Laos-Thailand-Malaysia-Singapore Power Integration Project (LTMS-PIP) is expected to be signed at the 38th ASEAN Ministers on Energy Meeting, which will be hosted by Vietnam in mid-November. According to a September 2019 report by International Energy Agency (IEA), the LTMS-PIP currently involves the sale of electricity from Laos to Malaysia, with Thailand acting as a transit country. In the same report, the IEA noted that establishing multilateral power trading would allow ASEAN member states to tap into the potential benefits of an integrated ASEAN power system, including reduced costs and an increased ability to integrate variable renewable energy resources.

The Philippines announces moratorium on new coal power proposals
(4 November 2020) The Philippines has stopped accepting new proposals for coal-based power projects to encourage investment in other energy sources like natural gas and renewables, Energy Secretary Alfonso Cusi said on 4 November. The moratorium on endorsements for greenfield coal-powered plants comes as the government aggressively pursues natural gas as a major source of energy, not just for power generation but also industrial, commercial and household sectors. However, coal is set to remain the dominant power source for the Philippines for years to come, due to coal-based projects already in the works and proposals already submitted to the government not covered by the moratorium. A series of approvals for coal-fired power plants in recent years has boosted coal’s dominance in the country’s power mix, accounting for 41% of capacity in 2019, when the country’s overall installed power capacity stood at 25,531 megawatts, according to data from the Department of Energy.

Local government units told to utilise US$6.2 billion credit facility
(3 November 2020) The Department of Finance has urged local government units (LGUs) to avail themselves of the largely untapped US$6.2 billion credit facility under the Land Bank of the Philippines to bankroll projects that would help the Philippine economy recover from the COVID-19 pandemic. Government data revealed that only 35%-40% of LGUs in the country had availed themselves of available loans despite the reasonable terms of 10 years at interest rates of 4.0%-4.5%. LGUs are considered low-risk borrowers due to the fact that they can pay for their loans with the annual internal revenue allotment allocations from the national government. LGUs are responsible for local governance in the Philippines through the provision of direct and basic services to their respective communities.

Rice exports projected to fall 50% in 2020
(5 November 2020) Thailand’s total rice exports for 2020 is estimated to be at 5 million tonnes, only half of 2019’s figure of 10 million tonnes, according to Thai Rice Exporters Association honorary president Vichai Sriprasert. He warned that the situation in 2021 could be worse due to the water level at 35 major dams being lower than in previous years. Wichai said that due to drought, the cost of rice production is US$258 (Bt8,000 per tonne), higher than other countries like China, Vietnam, India and Myanmar in which their rice cost production is estimated at around US$193 (Bt6,000) per tonne. He further added that Thai farmers and related authorities needed to focus on reducing costs and developing water resources for rice paddy.

Vietnam’s second stimulus package to focus on aviation, tourism and consumption
(4 November 2020) Vietnam’s draft of the second stimulus package shows that it would focus on sectors most affected by the COVID-19 pandemic, including aviation, tourism and consumption, according to the Ministry of Planning and Investment. The ministry had recently sent the draft to relevant ministries and agencies for comments. Policies included in the draft feature strong fiscal policies for vulnerable businesses and community groups and policies focused on the aviation and tourism industry. The policies for the aviation industry would support cash flow and liquidity for airlines to help them avoid bankruptcy. Financial support for the aviation industry in government-backed loans was estimated at around US$474 million (VND11 trillion). For the tourism industry, the ministry proposed a reduction of 80% of deposits for two years, from November 2020 to November 2022, aiming to help tourism enterprises have more working capital for their operation.

Typhoon Molave caused an estimated US$430 million worth of damage
(2 November 2020) Typhoon Molave caused an estimated US$430 million worth of damage when it struck Vietnam in October 2020, according to a posting on the government’s website which cited a meeting between Prime Minister Nguyen Xuan Phuc and local authorities. The typhoon was described as one of the two most powerful storms to hit Vietnam in the past 20 years, and reportedly destroyed more than 700 houses and left 80 people dead and missing. According to the General Statistics Office, in October alone, storms and natural calamities in general damaged some 111,900 houses, 45,000 hectares of paddy rice, and 22,300 hectares of fruits and vegetables. Likewise to Vietnam, the Philippines was hit by Typhoon Goni on 1 November 2020, described as the most powerful storm so far in 2020.

Jakarta to raise minimum wage for workers in businesses less impacted by COVID-19
(1 November 2020) Indonesia’s capital Jakarta will raise the minimum wage in 2021 for select businesses less affected by COVID-19. The minimum wage will be raised by 3.27% to US$302 for workers in businesses less impacted by the COVID-19 pandemic. The wage increase applies to businesses that are able to operate as usual and help support economic growth in the city. Despite a government circular issued on 27 October 2020 to maintain wages at current levels to help businesses stay afloat, Jakarta joins Central Java and Yogyakarta provinces in raising wages. The government calculates minimum wage increases based on inflation and economic growth, as well as the cost of living in each province. In 2020, the minimum wage was raised by 8.51%. Indonesian President Joko Widodo has made labour reform an economic priority and signed the Jobs Creation Bill into law on 2 November.

Indonesia expects boost in exports after US extends special tariff concessions
(2 November 2020) Indonesia is expected to see a boost in exports after the US extended the Generalised System of Preferences (GSP) privileges for Indonesia. The GSP is a special tariff concession which covers more than 3,500 merchandise items ranging from electronic products and children’s toys to sports equipment and wigs. In 2019, around 700 Indonesian export goods shipped to the US used this facility. In 2019, Indonesian exports worth US$2.61 billion, or 13% of its total US$20.1 billion exports to the US, were eligible for the GSP. In 2018, the US conducted a review of the eligibility of Indonesia and several other developing countries, including India, for the GSP, and decided to close the case for Indonesia on 30 October 2020 with no change to its status. The Indonesian government hopes to use this GSP extension to encourage investors hoping to circumnavigate US tariffs on China to set up plants and companies in the country.