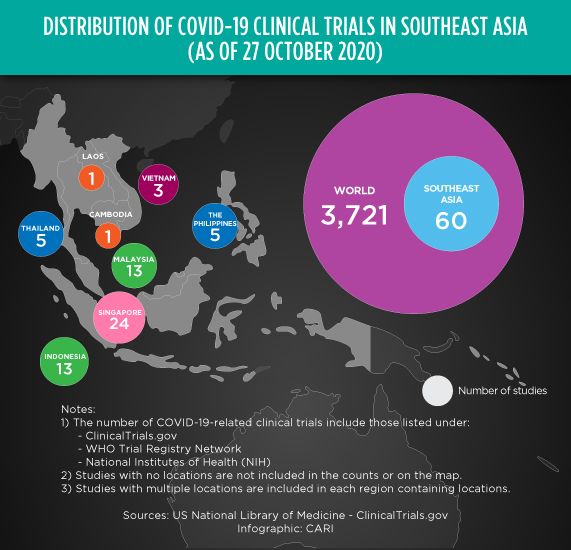 Duterte wants government-to-government deal for COVID-19 vaccines
(27 October 2020) Philippine President Rodrigo Duterte said on 27 October that he prefers a government-to-government deal for the purchase of COVID-19 vaccines to prevent the risk of corruption, adding that Manila would not beg other nations for access to vaccines. China’s Sinovac Biotech may start late-stage trials of its vaccine in the Philippines as early as November 2020, with the drugs agency evaluating its application. Philippine authorities are also evaluating COVID-19 vaccines of Russia’s Gamaleya Research Institute and Johnson & Johnson’s Janssen for late-stage trials and are in talks with drugmaker Pfizer Inc and Moderna Inc as potential suppliers. The Philippine government had previously allotted US$400 million to buy 40 million doses for 20 million Filipinos, as part of Duterte’s plan to inoculate the entire population. With 371,630 confirmed COVID-19 cases and 7,039 deaths as of 27 October, the Philippines has the second-highest number of infections and fatalities in Southeast Asia behind Indonesia.

US$17 million in grants awarded for energy efficiency projects
(27 October 2020) A total of US$16.9 million (S$23 million) in grants has been awarded by the Energy Market Authority (EMA) to three power generation companies for energy efficiency projects that will reduce their carbon emissions, the EMA said on 27 October. The three recipients are Senoko Energy, Tuas Power Generation as well as YTL PowerSeraya. The grants are part of the Genco Energy Efficiency Grant Call, under the enhanced Industry Energy Efficiency Package, that will co-fund up to 50% of energy efficiency projects by power generation companies. The grants are awarded to companies that strive to achieve carbon abatement through the projects, which will be implemented between now and 2024. Upon completion, the projects are expected to achieve an annual carbon abatement of over 30 kilo tonnes per annum. The amount is equivalent to taking about 9,200 cars off the roads annually.

Ongoing protests threaten Thailand’s economic recovery
(27 October 2020) Ongoing protests in Thailand is threatening the country’s economic recovery from the COVID-19-induced slump. The Bank of Thailand has warned that political instability may hurt confidence, consumption and investments, and that it may take about two years for the economy to recover to pre-pandemic levels. The current government strategy of using tax breaks and cash handouts to low-income groups to spur recovery may be impacted by the protests, as consumers may decide to remain at home instead. While the protests have not affected any government programmes, Thai equities are expected to be negatively impacted and Thai government bonds’ investors may demand higher risk premiums, thereby pushing bond yields up.

Brunei’s GDP grew 2.8% year-on-year in second quarter of 2020
(26 October 2020) The Centre for Strategic and Policy Studies (CSPS) stated that the country’s economy grew by 2.8% year-on-year in the second quarter of 2020. According to the national think tank, Brunei’s growth was largely supported by petrochemicals, while travel and tourism was hit hard by the COVID-19 pandemic. The country’s air transport and hotel sub-sectors contracted by more than 90% and 50% in the second quarter, respectively, while the restaurant sub-sector contracted by 20%. In the first quarter of 2020, Brunei’s growth was around 2.4%, while growth for the whole of 2020 has been revised to between 1.0%-2.0%. The CSPS estimated that the travel-related and consumer-facing service sectors in Brunei experienced steep contractions from mid-March to May 2020.

Indonesia launches online visa application for foreign visitors to enter countrya
(27 October 2020) Indonesia’s Law and Human Rights Ministry has launched an online visa application portal for foreign visitors who wish to enter the country. Those who wish to enter the country will have to fill out their personal information and travel purpose on the website, and if the application is granted they will receive an approval letter by email. It is hoped that the new website will help the country’s economic recovery through the facilitation of foreign investments and international tourism. The Law and Human Rights minister Yasonna Laoly stated that the e-visa sought to create a more expeditious, easier, and more transparent entry permit service.

International commercial flights and visa issuance ban extended to end-November
(26 October 2020) The Myanmar government extended a ban on international commercial flights and the issuance of all types of visas until the end of November 2020. The extension was done to contain the spread of COVID-19 before the general election. The ban on the entry of foreign visitors through land borders will also be extended for another month. These curbs, scheduled to end on 31 October 2020, were extended as directed by the National Committee on COVID-19 Control. A ban on domestic flights was also extended by two weeks through 15 November 2020 with Yangon International Airport set to continue operating repatriation, relief and cargo flights. Myanmar nationals abroad will be able to return on relief flights, while those hoping to travel on essential business must seek approval from the Foreign Ministry.

Government to list priority products to capitalise on FTAs
(26 October 2020) Cambodia is working on identifying potential and priority products to capitalise on preferential treatments under free trade agreements (FTAs) and boost exports. Ministry of Commerce secretary of state Seang Thay led the fourth meeting on 23 October among relevant departments under the ministry to discuss promoting production and shoring up bilateral trade in the region. Cambodia Chamber of Commerce vice-president Lim Heng said the initiative is in response to a global campaign to boost agricultural productivity, which has topped agendas worldwide amid the COVID-19 pandemic. According to the Ministry of Agriculture, Forestry and Fisheries, Cambodia exported more than 3 million tonnes of agricultural products as of mid-September. Its data as of 11 September 2020 showed that the country had exported a large number of finished agricultural products including milled rice, cassava, pepper, rubber, fresh mangoes, cashew nuts, bananas, corn, soybeans, vegetables and tobacco.