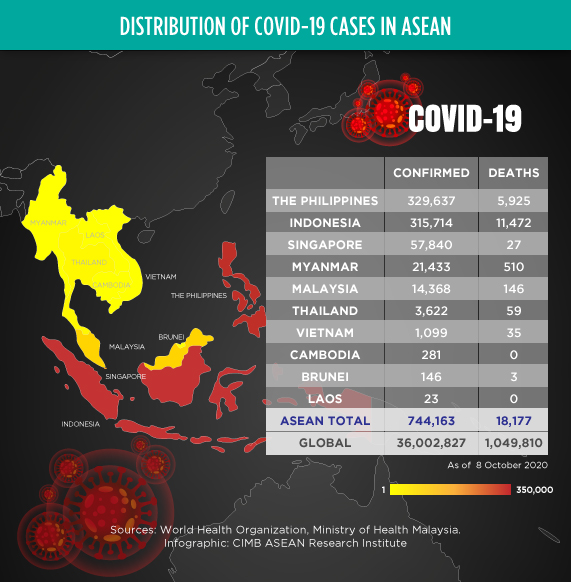 Singapore ready to begin first phase 3 antibody trial for COVID-19 patients
(8 October 2020) Singapore is ready to begin the first phase three monoclonal antibody trial for hospitalised COVID-19 patients. According to the National Centre for Infectious Diseases (NCID), it is ready to enrol its first patients as of 6 October and aims to enrol 100 patients. Singapore is only the third country to start recruiting patients as part of a global trial called Activ-3, which started in August 2020 and aims to recruit 1,000 patients globally. As of 8 October, the number of global patients recruited totalled 260, most of them from Denmark and the US. Activ-3 is estimated to be completed by the end of 2020 or in January 2021. The monoclonal antibody is a purified, highly active antibody that targets the spike protein of the coronavirus and the Activ-3 trial enrols COVID-19 patients who are sick enough to be hospitalised.

ASEAN region still attractive for European businesses but hurdles remain
(8 October 2020) More than half (53%) of European businesses in the region see ASEAN as the region with the best economic opportunity while almost three quarters (73%) of respondents say they plan to expand current levels of trade and investment in the region in the next five years. These were some of the key findings from the 2020 EU-ASEAN Business Sentiment Survey released on 8 October. Despite the positive findings, the optimism among European businesses declined from a year ago due to the COVID-19 pandemic and also the pace of ASEAN’s economic integration and customs procedure. Almost half of the respondents (49%) said they did not have the resources to deal with the pandemic while 92% reported a negative impact of their businesses in ASEAN due to the pandemic. On the matter of free trade agreement (FTA), 98% of the respondents would like the European Union to accelerate FTA negotiations with ASEAN and its members.

Government passes omnibus bill on job creation despite opposition
(5 October 2020) The Indonesian government has passed the controversial omnibus bill on job creation into law on 5 October 2020, earlier than the initially planned date of 8 October, despite growing opposition due to the bill’s anticipated impact on labour rights and the environment. The law aims to improve bureaucratic efficiency, particularly with regards to business permits and investment. Coordinating economic minister Airlangga Hartarto said the law was necessary to increase employment and improve the business climate following the COVID-19 pandemic. While several house factions have approved the bill, two other factions, the Democratic Party and the Prosperous Justice Party have rejected the bill. Civil society organisations voiced their opposition and labour groups held protests on the same day in several locations in Jakarta. On 8 October, thousands of students and workers staged protests across Jakarta to voice their opposition towards the omnibus law on job creation.

Government preparing US$5.1 billion in capital for sovereign wealth fund
(9 October 2020) The Indonesian government is preparing US$5.1 billion in capital for the country’s sovereign wealth fund called the Indonesia Investment Authority. The fund would raise its required funds from private investors instead of Indonesia’s reserve funds, and it is unclear where the funds would be invested (although the fund has been described as being earmarked for development and stabilisation). The fund will have a supervisory council led by finance minister Sri Mulyani Indrawati, with members including the state enterprise minister and three more professionals. The government would still be able to inject more money into the fund should its capital decline significantly. The establishment of the sovereign wealth fund is included in the job creation law passed recently.

Thailand to extend tax incentives to spur growth
(8 October 2020) Thailand will extend tax incentives to millions of its middle- and upper-income groups to drive consumption and mitigate the country’s worst economic slump caused by the COVID-19 pandemic. The concession will allow about 3.7 million taxpayers to deduct US$962 (30,000 baht) each from their total taxable income and will cost the government US$353 million (11 billion baht), deputy prime minister Supattanapong Punmeechaow told reporters on 7 October. The proposal will be submitted for cabinet approval on 12 October, he said. Supattanapong added that the latest tax breaks and co-payment programmes can together deliver a US$6.4 billion (200 billion baht) boost to the Thai economy in the fourth quarter of 2020. According to a government statement, the tax relief will exclude spending on alcohol, cigarettes, lottery, hotel and airlines costs and will be valid between 23 October and 31 December 2020.

Businesses allowed to reopen further despite high number of COVID-19 cases
(5 October 2020) The Philippine government has allowed malls and businesses to reopen further despite 90,000 new COVID-19 cases being recorded in September 2020. Essential shops in malls, money exchanges, and miners will be allowed to operate at full capacity, while restaurants will be allowed to operate round-the-clock. Malls can stay open until 11:00 PM, while salons and barbershops are allowed to operate at 75% capacity. According to socioeconomic planning secretary Karl Chua, the Philippines is expected to contract by as much as 6.6% in 2020, with the poverty rate expected to temporarily rise to 17.5%.

Government to reduce its civil service workforce and freeze new hirings
(8 September 2020) The Vietnamese government will reduce its civil workforce by 4,000 workers and has frozen all new hirings as the country struggles to recover from the COVID-19 pandemic. Prime minister Nguyen Xuan Phuc has approved the proposal to reduce the number of workers to 249,650 in 2021. This follows measures approved in 2017 for government offices to reduce their staff by 1.5% to 2.0% a year for the next five years. Central and local agencies were ordered to ensure only key employees were retained, while there would be no fresh hiring in the healthcare and education sectors. The civil service was cut from 265,100 in 2018 to 259,598 in 2019, and 253,000 in 2020.

Japan to remove travel ban for 12 countries including three ASEAN countries
(8 October 2020) Japan is planning to remove a ban on overseas travel to 12 countries including Malaysia, Singapore and Vietnam in November 2020, according to a Japanese news outlet. The other countries include Taiwan, Australia, China, New Zealand and South Korea. The Japanese government, which currently bans travel to 159 countries and regions, will recommend that travellers refrain from unnecessary and non-urgent visits to the 12 countries. Meanwhile, Japan plans to permit Japanese and foreign national business travellers with residency status to re-enter the country without having to isolate for two weeks, according to a regional media company. The two-week self-quarantine measure will be waived for returning business travellers who submit an action plan. The travellers will also have to refrain from using public transit. The final decision on the easier re-entry procedure is expected to be made sometime this month.

Service charge to be imposed on individuals crossing the Sarawak-Brunei border
(8 October 2020) Starting on 1 October 2020, the Bruneian government has imposed a US$2.2 service charge on each individual every time they cross the Sarawak-Brunei land border post. Bruneian and foreign nationals who travel frequently at least 15 times a month for work and/or schooling purposes will be eligible to apply for a Frequent Commuters Pass (FCP), which can be applied for online through the portal of the Prime Minister’s Department of Brunei Darussalam. The FCP rate for employees for one month is US$36.8 per individual, while for students it is US$22.1 per individual. Exemptions for the service charge will be provided to vehicles owned by the Malaysian government or the Sarawak state government for official use, as well as to fire engines, ambulances and police, hearse vehicles; and children aged two years and under.