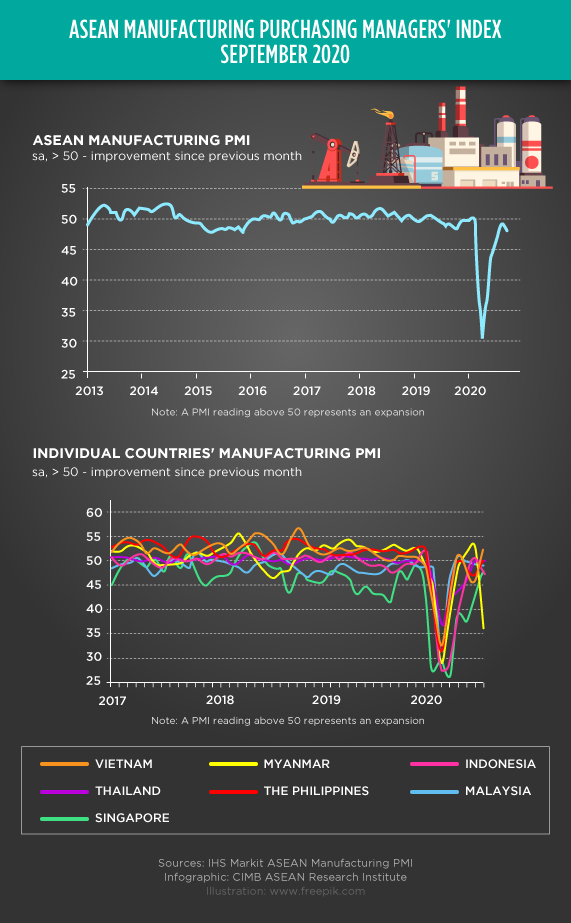 ASEAN manufacturing’s operating conditions deteriorate again in September
(1 October 2020) ASEAN’s headline manufacturing Purchasing Managers’ Index (PMI) posted a modest deterioration to 48.3 in September 2020 after having stabilised at 49.0 in August. Firms continued cutting their staffing levels for the sixteenth month running, after seeing a slight easing of job shedding in August. The 12-month sentiment outlook, however, reached an eight-month high as companies had a more confident outlook of economic recovery. Among the seven ASEAN countries covered, Myanmar recorded the largest deterioration; its headline figure fell to a near-record low of 35.9 in September, marking a weakened performance of the sector amid stricter lockdown measures. Indonesia also saw a renewed contraction, following slightly improved conditions in August. Further contractions were recorded in Singapore (48.0) and Malaysia (49.0). Vietnam’s manufacturing sector saw the first improvement in operating conditions for three months during September. Its headline index (52.2) was the highest since July 2019 and signalled a modest improvement in conditions.

New ASEAN regional centre to address the future of work
(29 September 2020) Singapore launched the Regional Centre for the Future of Work on 29 September 2020. The new regional centre will help ASEAN member states prepare for the future of work and will be advised by ASEAN Secretary-General Dato Lim Jock Hoi and relevant international experts. Speaking after launching the centre, Minister for Manpower Josephine Teo said the initiative is especially timely during the COVID-19 pandemic. The idea for the new centre was first presented as a regional initiative to ASEAN leaders and International Labour Organization (ILO) representatives last year at the 2019 Singapore Conference on the Future of Work. The centre will advocate the adoption of technology for inclusive growth, workplace safety and health, and tripartite relations. The centre will also be organising more conferences over the next few years, in collaboration with the National Trades Union Congress and the Singapore National Employers Federation.

Singapore ranked second most digitally competitive economy in the world
(1 October 2020) Singapore was ranked second in the world in digital competitiveness in the latest edition of the IMD World Digital Competitiveness Ranking. The ranking measures the capacity of 63 nations to use digital technologies to drive economic transformation in business, government and wider society, and is currently in its fourth year. Singapore excelled in areas including knowledge, technology, and employee training, but continued to trail in future e-readiness due to a lower adaptability to technological change and a drop in business agility. Other ASEAN countries covered in the ranking included Malaysia (26th), Thailand (39th), Indonesia (56th) and the Philippines (57th). The US took the top spot, with Singapore, Denmark, Sweden and Hong Kong rounding up the top five spots.

World Bank revises Malaysia’s GDP contraction for 2020 to 4.9%
(29 September 2020) The World Bank has recently revised its 2020 economic growth forecast for Malaysia to 4.9%, from the previously estimated 3.1% decline. This was after the larger than expected contraction of 17.1% in the second quarter of 2020 due to the imposition of the movement control order (MCO), as well as weak external conditions. The revised projection reflected the heightened uncertainty over the speed of the global recovery from COVID-19, as well as the elevated unemployment rate and labour market weaknesses. Malaysia’s central bank projects that the country will experience a contraction of between 3.5% and 5.5% in 2020.

Central bank to cease issuance of 10,000-Brunei-dollar currency notes
(1 October 2020) Brunei’s central bank, Autoriti Monetari Brunei Darussalam stated on 1 October 2020, that its issuance and circulation of the 10,000-Brunei-dollar currency notes will cease effective 2 November 2020. The 10,000 Brunei-dollar notes is the country’s biggest denomination currency. However, the bank stated that the notes will remain legal tender and retain full face value. The decision to stop the circulation of the notes was to reduce the risks of financial crimes such as money laundering and counterfeiting. The public was also encouraged to use alternative payment methods such as debit or credit cards for high-value transactions.

Cambodia wins rice battle in EU court
(29 September 2020) The European General Court has rejected the European Commission’s (EC) request to reject a complaint submitted by Cambodia and the Cambodian Rice Federation (CRF) regarding the EU’s reintroduction of tariffs on Indica rice exports from Cambodia. In April 2019, Cambodia and the CRF took the EC to court for the commission’s decision to reintroduce import duties for Indica rice from Cambodia for three years. The court said that temporarily reintroducing the Common Customs Tariff duties on imports of the product is tantamount to limiting the access of certain entities to the EU market, including that of Cambodia. It said the contested regulation caused significant economic damage for Cambodia. “It follows from all the foregoing that the plea of inadmissibility must be rejected,” the court said.

Household debt in Q2 2020 jumps to 83.8% of GDP as economy shrinks
(30 September 2020) Thailand’s household debt level to GDP jumped to 83.8% in the second quarter of 2020, the highest since 2003, data from the Bank of Thailand showed on 30 September, as the COVID-19 pandemic hammered the economy. The kingdom suffered its largest contraction in 22 years in the second quarter and may shrink to a record 7.8% in 2020, according to the central bank’s projections. As of June 2020, household debt increased to US$429.11 billion (13.59 trillion baht), from US$427.75 billion (13.50 trillion baht) at end-March, equal to a revised 80.2% of GDP, already among the highest in Asia. Bank of Thailand director Don Nakornthab said in a statement that the debt ratio was driven by an economic contraction, while the amount rose at a slower pace. Kasikornbank’s research centre projects that the debt to GDP ratio may surge to 88%-90% at the end of 2020.

Philippines Airlines to cut more than a third of its workforce
(1 October 2020) Philippines Airlines started a major job-cutting programme on 1 October 2020 that could cut its workforce by more than a third, reflecting the deepening impact of the COVID-19 pandemic and the resultant travel restrictions across Asia. The first phase of the programme will see the airline seeking voluntary resignations, after which compulsory resignations will be made. The move is expected to run through early December 2020, and staff were informed in early September 2020 that the airline was considering a 21% to 38% reduction of its workforce. Philippines Airlines is considering cutting around 35% of jobs across all departments. The airline and its budget affiliate employ around 7,800 workers. The airline’s listed parent, PAL Holdings, which is partly owned by Japan’s ANA Holdings, saw its revenue plunge 88.8% to US$97 million during the April-June quarter, which covered the most intense period of lockdown in the Philippines.

Founders of PT Lion Mentari Airlines planning on starting new airline
(1 October 2020) The founders of Indonesia’s PT Lion Mentari Airlines are planning on starting a new airline in the country, as the airline seeks to move beyond a 2018 crash. The transport ministry has confirmed it is processing one application for an air operator certificate but did not confirm for which airline. Air travel in Indonesia in July 2020 measured at 1.46 million people, a significant decline from 7.14 million in the same month in 2019. If the new airline goes ahead, an independent aviation analyst argued it may allow Lion’s founders to grab a bigger share of Indonesia’s aviation market once air travel rebounds.

Vietnam sets out to achieve 17 sustainable development goals by 2030
(29 September 2020) The Vietnamese government has set 17 sustainable development goals (SDGs) to achieve by 2030 in a recently-issued decree, Decree No 136/NQ-CP. The goals aim to reduce poverty and inclusivity and develop the country in a sustainable and responsible manner. The country will strive for a peaceful, democratic, just, equal, civilised society; build effective institutions with good accountability and promote global partnership towards sustainable development. The decree outlines tasks and solutions to realise the goals, with focus on completing institutions and policies, enhancing communications, promoting the role of and participation by relevant parties, mobilising and arranging financial resources, and intensifying international co-operation. Specific measures have also been assigned to ministries and sectors.