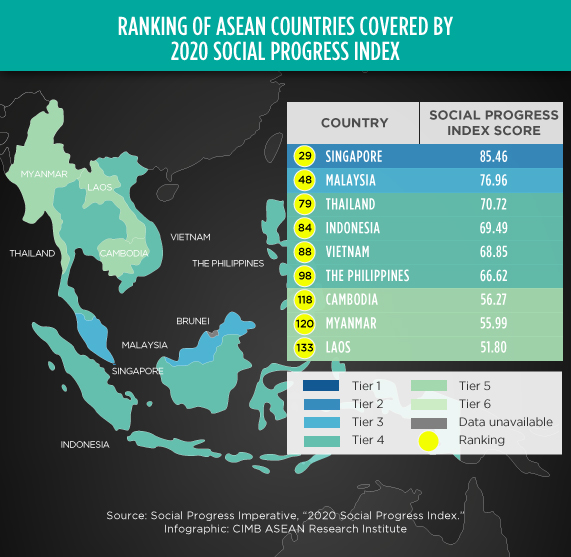 Six ASEAN countries score above global average in 2020 Social Progress Index
(10 September 2020) Singapore leads ASEAN countries in the 2020 Social Progress Index with 29th place followed by Malaysia (48th), Thailand (79th), Indonesia (84th), Vietnam (88th), the Philippines (98th), Cambodia (118th), Myanmar (120th) and Laos (133rd). This year’s edition is the first to include Vietnam. Singapore, Malaysia, Thailand, Indonesia, Vietnam and the Philippines all obtained scores above the global average of 64.24. According to the index, the world’s social progress is improving, however, despite the overall progress, personal rights and inclusiveness have declined since 2011, while environmental quality and personal safety has stagnated. It also suggested that if current trends continue, the world will not achieve its social goals until 2082. The data also indicates that, unless urgent actions are taken, the COVID-19 pandemic will set the world back another decade, delaying achievement of the goals to 2092—more than 60 years after the 2030 target date of the Sustainable Development Goals.

ASEAN Wide Self Certification to be launched on 20 September 2020
(18 September 2020) The ASEAN Wide Self Certification (AWSC) is set to be launched on 20 September 2020. The launch follows two Self-Certification Pilot Projects, SCPP1 and SCPP2, implemented by ASEAN member states in November 2010 and January 2014, respectively. The AWSC will allow certified exporters to declare the origin status of their goods themselves on permitted commercial documents to claim preferential tariff treatment under the ASEAN Trade in Goods Agreement (ATIGA). The self-certification scheme is expected to improve turnaround time and cost efficiency. The AWSC can be performed anytime and includes other benefits including the simplification of export procedures, and reduction in workload and costs. To become a certified exporter, companies need to check their eligibility, register with their country’s competent authority and fulfill certified exporter obligations. The launch of the AWSC is the culmination of work by ASEAN since the initiative was first thought of during the 22nd ASEAN Free Trade Area (AFTA) Council in 2008. More details can be obtained at the AWSC website.

Southeast Asia GDP projected to contract 3.8% in 2020, grow 5.5% in 2021
(15 September 2020) The Asian Development (ADB) has revised its GDP projections for Southeast Asia to -3.8% in 2020, followed by a forecasted 5.5% growth in 2020. According to an ADB report released in September, Malaysia, the Philippines, Singapore and Thailand experienced double-digit contractions in the second quarter of 2020 and are now expected to shrink by more than 5.0% in 2020. Although COVID-19 infections continue to rise in some countries, notably Indonesia and the Philippines, along with surprise outbreaks elsewhere in the subregion such as Vietnam, economic recovery will continue to be slow and painful, largely determined by developments in world trade and the global economy. Resilient exports of petrochemicals from Brunei, agricultural products from Myanmar, and work-from-home electronics from Vietnam are projected to keep these three economies in growth territory in 2020. Inflation in the region is forecasted to dip by half to 1.0% in 2020 and revive to 2.3% in 2021.

Malaysia and Japan sign US$3 billion currency swap arrangement
(18 September 2020) The Bank of Japan and Bank Negara Malaysia have signed a Bilateral Swap Arrangement (BSA) that will provide up to US$3 billion for both countries. Under the agreement, both central banks will be allowed to swap their local currencies (in this case the ringgit and yen) for US dollars, with up to US$3 billion provided. A joint statement by both countries on the occasion stated that the arrangement will contribute to the stability of financial markets, and will further strengthen the growing economic and trade ties between both countries.

Indonesia’s central bank holds key rate steady to underpin stability of rupiah
(18 September 2020) Indonesia’s central bank, Bank Indonesia, decided to keep its key interest rate unchanged on 17 September in order to keep the rupiah currency stable, with the benchmark seven-day reverse repurchase rate kept steady at 4.00% for a second month running. The rupiah has fallen nearly 2.0% in September 2020 due to concerns over the future independence of the central bank amidst recommendations to overhaul its operations and mandate. The central bank will instead focus on quantitative channels to support the economy. BI has resorted to unconventional policies to cushion the blow from the pandemic, including by directly financing some of the government’s COVID-19 programmes. The central bank has trimmed its key rate four times so far in 2020, as well as cut banks reserve requirements and eased lending rules.

Gross international reserves rises to almost US$100 billion in August 2020
(17 September 2020) The Philippines’ gross international reserves (GIR) level rose by US$350 million to $98.95 billion as of end-August from the end-July level of $98.6 billion, according to Bangko Sentral ng Pilipinas (BSP). The Philippine central bank said on 16 September the month-on-month increase in the GIR level reflected inflows primarily from the BSP’s foreign exchange operations and income from its investments abroad. The BSP, however, added that these inflows were partially offset by the foreign currency withdrawals made by the national government to pay its foreign currency debt obligations and revaluation losses from the BSP’s gold holdings. The BSP said the end-August GIR level represents a sufficient external liquidity buffer, which can cushion the domestic economy against external shocks. Similarly, the BSP said the net international reserves (NIR), increased by US$354 million to US$98.95 billion as of end-August from the end-July level of US$98.59 billion.

Bank of Thailand issues digital personal loan regulations
(18 September 2020) The Bank of Thailand has issued digital personal loan regulations to allow consumers with no financial statements better access to financial services. A circular issued to businesses that want to apply for the digital loan business licenses informed them to incorporate alternative data for digital personal loan analysis, other than the traditional financial documents. Such alternative data can include utility bills for water, electricity, and telephone as well as online shopping records, which businesses can use to determine customers’ debt-repayment abilities. Digital loan providers will also need to adopt digital technology for operational processes such as loan offering, debt repayment and information disclosure such as interest rates, fees and penalties. Under the regulations, the maximum credit that can be offered is capped at US$642 with the longest loan period being six months.

Domestic flights suspended due to spike in COVID-19 cases over weekend
(15 September 2020) Myanmar’s Department of Civil Aviation has suspended all domestic flights until 1 October 2020. This came after COVID-19 cases spiked at 2,455 cases and 14 deaths over the weekend. Domestic travel by air to the cities of Mandalay, Bagan and Inle Lake have been virtually halted. Almost the entire country has been placed under lockdown, while the border with Thailand has been closed since March 2020. Authorities are racing to build a field hospital in the commercial capital of Yangon to cope with a surge of COVID-19 infections that medical practitioners fear will threaten to overwhelm the country’s fragile health system. Three hospitals in Yangon have been repurposed to treat COVID-19 patients and the government is building a field hospital with 500 beds on a football pitch. The country had gone weeks without a case of local transmission before an outbreak in mid-August in the western region of Rakhine that has spread across the country.

Arrivals from Singapore and Thailand will not be required to quarantine in England and Scotland
(18 September 2020) Travellers arriving from Singapore and Thailand will not be required to undergo quarantine when they arrive in England and Scotland starting from the morning of 19 September 2020. The two countries were recently added to the list of “travel corridor” countries. When a country’s seven-day rate of cases per 100,000 rises above 20, the UK government will consider imposing quarantine measures. However, the decision to remove quarantine measures for arrivals from Singapore and Thailand are unlikely to lead to an influx of British visitors as the two ASEAN nations are only allowing a limited number of visitors to enter its borders if they either have a work permit, or are a resident or spouse.

Singapore and UN body set up global platform to reduce shipping’s carbon footprint
(17 September 2020) Singapore and the International Maritime Organisation (IMO) launched NextGEN on 17 September to help the maritime sector address global warming. The project, which is still in the preliminary stages, aims to develop a common platform for the 174 IMO member states over the next two or three years, to allow the different initiatives of individual countries to be shared and improved upon. The IMO wants to reduce annual greenhouse gas emissions from shipping by at least half by 2050, from 2008 levels. According to Singapore’s Minister of Transport Ong Ye Kung, the Tuas Port, when completed in the 2040s, will be the world’s largest fully automated terminal. The port will stop using conventional diesel-operated movers and will handle twice the number of 20-foot equivalent units with half the carbon emissions intensity, compared to 2005. The port will have a fleet of fully-electric automated guided vehicles instead, and will also give vessels that use cleaner fuels concessions in port dues.