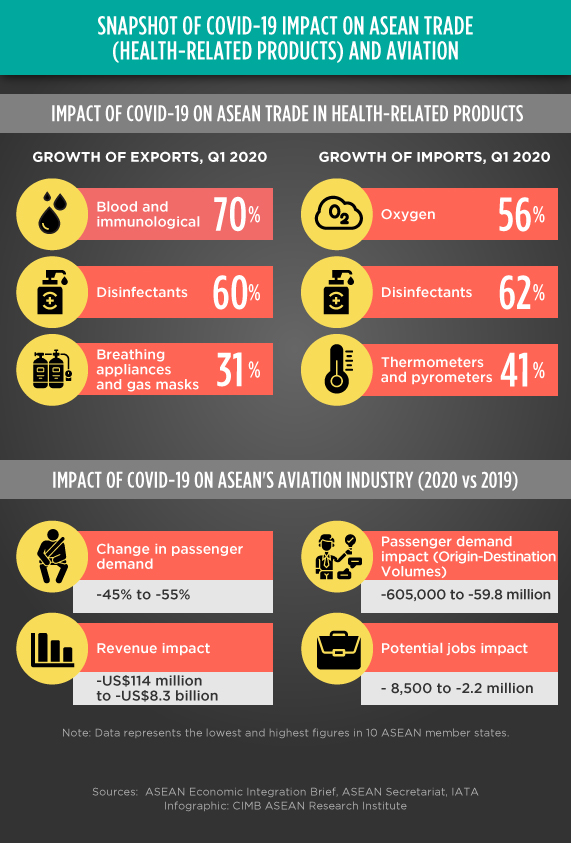 Indonesian stocks fall by more than 5% after Jakarta reinstates partial lockdown
(10 September 2020) Indonesian stocks fell by more than 5% on 10 September to their lowest in almost three months following an announcement on 9 September that Jakarta would reinstate partial lockdown measures to combat COVID-19. The benchmark Jakarta Composite Index has been one of the worst-performing stock indexes in the region in 2020, declining by more than 22% as of 10 September. Jakarta is set to return to a partial lockdown from 14 September onwards, similar to the one the capital was placed under from April to June 2020. The reimposition of the lockdown aims to prevent rising COVID-19 cases from overwhelming the city’s healthcare system. The city is home to more than 10 million people and has been the epicentre of Indonesia’s COVID-19 outbreak, accounting for nearly a quarter of the country’s cumulative infections.

SIA announces 2,400 job cuts amid COVID-19 fallout
(10 September 2020) The Singapore Airlines (SIA) Group announced during a virtual townhall on 10 September its decision to cut around 4,300 positions. However, the potential number of staff impacted is expected to come down to 2,400 after taking into account a recruitment freeze, natural attrition and the take-up of voluntary departure scheme, the company said in a statement. The company expects to operate at less than 50% of its capacity by the end of its financial year in March 2021, as compared to the level before the COVID-19 pandemic. The layoffs had been widely anticipated and come as international travel continues to stall, with governments enforcing strict border controls to contain COVID-19. According to the International Air Transport Association (IATA), passenger demand for air travel is not expected to return to pre-crisis levels until 2024.

Singapore welcomes discussions with Hong Kong on resumption of travel
(10 September 2020) The Singapore Consulate-General in Hong Kong stated they welcomed discussions with Hong Kong on the resumption of cross-border travel between both city-states, given the strong business and people-to-people links. This was after Hong Kong’s Secretary for Commerce and Economic Development Edward Yau Tang-wah stated earlier in the week of 7 September, that the territory is planning “travel bubbles” with 11 countries, including Singapore, South Korea, and Germany. Singapore currently has cross-border travel arrangements with China, Malaysia, Brunei and South Korea. It is currently in talks to resume essential business travel with Japan, with officials tasked to finalise an agreement by early September and has reportedly begun discussions on a reciprocal green lane with Indonesia.

Tourism agency planning on allowing tourists from low-risk countries to visit
(10 September 2020) The Tourism Authority of Thailand is planning on allowing foreign tourists from countries with low COVID-19 risks to visit the country without a mandatory quarantine. The quarantine waiver will be targeted at Asian travellers who usually stay for not more than two weeks. The proposal will require government approval and negotiations with countries where the tourists are targeted. Next week, the agency will seek approval from the Cabinet for a special tourist visa for long-term visitors. Thailand’s hospitality and tourism sectors are counting on the return of international tourists, who contributed two-thirds of the tourism receipts pre-pandemic, to reverse a slump in business and save millions of jobs. The government and businesses are weighing the cost between curbing infection risks and limiting damage to the economy, which is on track for a record contraction of 8.5% in 2020.

ASEAN SMEs Recovery Facility proposed at 53rd ASEAN Foreign Ministers’ Meeting
(10 September 2020) Thailand has proposed the setting up of the ASEAN Small and Medium Enterprises (SMEs) Recovery Facility for post-pandemic recovery in the region. The proposal was made via a statement by Thailand’s Ministry of Foreign Affairs during the 53rd ASEAN Foreign Ministers’ Meeting (AMM-53) held via video conference on 9 September. The aim of the facility is to be a new financing facility for the post-COVID-19 recovery and revival of SMEs in the region. The AMM-53 and related meetings began on 9 September and will conclude on 12 September, with discussions on COVID-19 set to be one of the main agenda together with the preparation for the 37th ASEAN Summit in November 2020. The meeting was chaired by Vietnam’s Deputy Prime Minister and Foreign Affairs Minister, Pham Binh Minh, and attended by Secretary-General of ASEAN Lim Jock Hoi and all ASEAN foreign ministers.

Central bank decides to maintain key policy rate at 1.75%
(10 September 2020) Bank Negara Malaysia (BNM) has decided to maintain its overnight policy rate (OPR) at 1.75%, with the central bank citing continued improvement in the global economy due to easing containment measures across economies. The central bank noted that there has been a resumption of manufacturing and trade activities, although recovery in the service sector has been slow. Among the key economic indicators which have shown signs of improvement since April 2020 include labour market conditions, household spending and trade activity. Headline inflation is expected to average negative in 2020, before rising in 2021. BNM has slashed the OPR four consecutive times since the start of 2020, starting with the two 25bps cuts during the January and March meetings, followed by a 50bps cut in May and another 25bps cut in July.

Nine Vietnamese fragrant rice varieties given tariff quotas under EVFTA
(11 September 2020) Nine Vietnamese fragrant rice varieties will receive tariff export quotas to Europe under the Europe-Vietnam Free Trade Agreement (EVFTA) agreement. Under the agreement, the EU will grant Vietnam a quota of 80,000 tonnes of rice with a 0% tax rate per year, including 30,000 tonnes of milled rice, 20,000 tonnes of unmilled rice and 30,000 tonnes of fragrant rice. The EU will also fully liberalise broken rice, allowing Vietnam to export an estimated 100,000 tonnes to the EU annually. For rice-based products, the EU will bring the tax rate down to 0% after three to five years. Rice plantations in Mekong Delta provinces account for about 25% of the total cultivated area, equivalent to about 1 million hectares.

Government provides investors with facilities to develop geothermal energy
(10 September 2020) The Indonesian Ministry of Energy and Mineral Resources plan to make it easier for investors to develop geothermal energy in the country through several facilities. The facilities include the issuance of law on geothermal energy, which facilitates the development of geothermal power plants in production forest areas, protected forest areas and conservation forest areas. Minister of Energy and Mineral Resources Arifin Tasrif said the government will also call on geothermal energy contractors to create programmes on public welfare and corporate social responsibility in addition to encouraging provincial and district administrations to use regional incomes from production bonuses. To encourage investment in the geothermal energy sector, the Indonesian government provides various incentives including tax allowances, exemption from property tax and import duty. In a bid to reduce risks contractors may face, the government has also initiated a scheme in which the exploration activities are conducted by the public sector.

ADB to test run first disaster insurance scheme in Southeast Asia
(10 September 2020) The Asian Development Bank (ADB) has approved a US$500 million loan to help the Philippines prepare for natural hazards or public health emergencies. The loan includes piloting the first disaster insurance scheme in Southeast Asia. The new policy-based loan will support a new Department of Disaster Resilience which is pending legislation. The new department is expected to speed up the government’s disaster response and reduce bureaucratic inefficiencies. The disaster insurance scheme will be piloted in several cities to bolster their fiscal resilience and provide a predictable, timely source of financing for post-disaster response. The loan will make climate-change adaptation and disaster risk reduction an integral part of comprehensive development plans of local government units (LGUs), even beyond the pandemic. Natural disasters in the Philippines cost 0.7% to 1.0% of its GDP every year, including about US$890 million caused by earthquakes and around US$2.7 billion from typhoons.

US’s CDC to open regional office in Hanoi
(10 September 2020) The US State Department stated that the US Centers for Disease Control and Prevention (CDC) will open a regional office in Hanoi to increase public health engagement between the US and ASEAN. The announcement was made after an online ministerial meeting with members of ASEAN hosted by Vietnam on 10 September. The role of the regional CDC office was not clearly stated but it is expected to increase the centre’s capacity in the region. Under the US-ASEAN Health Futures programme, launched by the US State Department on 22 April 2020, new initiatives were announced, including additional investments to help ASEAN prepare for public health emergencies, as well as the creation of the Health Futures Alumni Network, which will bring together more than 2,400 medical and public health alumni of US exchange programmes with ASEAN.