CARI Captures 468: Thailand and Malaysia ranked as the top two best countries to start a business 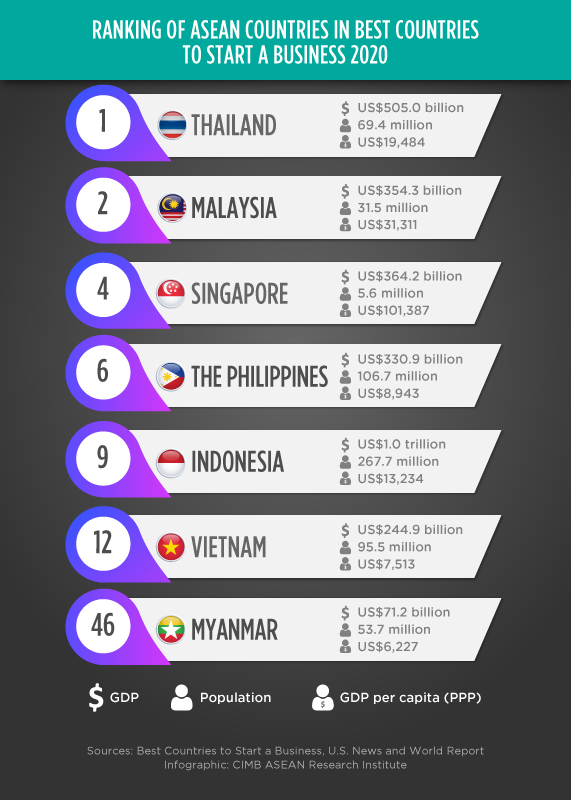 Thailand and Malaysia ranked as the top two best countries to start a business
(25 August 2020) Thailand topped the list of US News & World Report’s Best Countries to Start a Business ranking for the second consecutive year while Malaysia moved up three spots to second place. Countries were ranked based on scores from nearly 6,000 business decision-makers in a compilation of five attributes: affordability, bureaucracy, low manufacturing costs, connecting with the rest of the world, and easy access to capital. Singapore remained in fourth place while the Philippines, Indonesia and Vietnam improved in rankings. Only Myanmar fell in the rankings, from 41st in 2019 to 46th place this year. According to the report, starting a business in Thailand took six days and required five procedures, namely, reserving a company name, putting capital in a bank, registration of a new company, registration for value added tax, and submitting employee registration.

ASEAN ministers review region’s economic plans
(27 August 2020) Economic ministers at the 52nd ASEAN Economic Ministers’ Meeting (AEM-52) chaired by Vietnamese Minister of Industry and Trade Tran Tuan Anh reviewed the implementation of economic initiatives in 2020. The ministers looked at the region’s response to COVID-19, including its ability to roll out a comprehensive recovery plan, and exchanged views on recommendations submitted by the special group in charge of ASEAN’s economic integration. Other matters debated included the upcoming negotiations over the Regional Comprehensive Economic Partnership (RCEP) agreement and the implementation of the ASEAN Economic Community Blueprint 2025. At the 8th Regional Comprehensive Economic Partnership (RCEP) Ministerial Meeting held virtually on 27 August, economic ministers of 15 member countries, aimed to promote talks on the RCEP towards the signing of the agreement in late 2020 and re-affirmed that the RCEP negotiations remain open to India.

ASEAN-Myanmar trade reaches US$9.9 billion in first nine months of FY 2019/2020
(19 August 2020) Trade between Myanmar and other ASEAN countries reached US$9.9 billion in the first nine months of Myanmar’s fiscal year 2019/2020, according to data released by the Myanmar Ministry of Commerce on 19 August. Between 1 October 2019 and 30 June 2020, Myanmar exported more than US$3.6 billion worth of goods to ASEAN countries and imported over US$6.3 billion. During the period, Myanmar’s top three trading partners among ASEAN countries based on trade values were Thailand (US$3.9 billion), Singapore (US$3.3 billion) and Malaysia (US$1 billion). Among the remaining ASEAN countries, Myanmar’s trade was estimated as follows: Indonesia (US$936.5 million), Vietnam (US$609.47 million), the Philippines (US$122.74 million), Cambodia (US$25.7 million), Laos (US$1.3 million) and Brunei (US$0.31 million). Myanmar’s main exports consist of agricultural, fishery products, minerals, and manufacturing goods, while the country’s main imports comprised capital goods, intermediate goods and consumer goods.

Indonesia receives assistance from Green Climate Fund to fight climate change
(27 August 2020) Indonesia has received an injection of cash from the United Nation’s Green Climate Fund to help reduce carbon emissions and tackle forest fires at a time when the country has had to scale back spending in the area due to COVID-19. According to Environment and Forestry Minister Siti Nurbaya Bakar, the US$103.8 million fund was granted under the REDD+ programme, a U.N.-backed forestry conservation scheme to tackle climate change, based on progress the country has made between 2014 and 2016. Nurbaya said in a virtual briefing on 27 August that controlling fires was an important part in reducing deforestation. Data from the environment and forestry ministry showed that between January and July 2020, around 64,000 hectares have been burned, compared with 137,000 hectares over the same period in 2019. Indonesia aims to slash carbon emissions by 29% by 2030 on its own, or by 41%, with international assistance.

Government hopes development of new capital will restart in 2021
(27 August 2020) Indonesia’s National Development Planning Minister Suharso Monoarfa said that development of Indonesia’s new capital, which was meant to begin this year but was stopped by COVID-19, is expected to begin in 2021. According to Suharso, investors are still interested in the project, and invited other ASEAN countries to invest into the new capital as well. Even though there is currently no construction work in progress, he explained that the master plan is still being worked on. “The detailed plan will follow, then we will include basic infrastructure works in cities that will support the future capital of the country, for example, Balikpapan, Samarinda,” he said. The project to construct Indonesia’s new capital in the districts of Penajam Paser Utara and Kutai Kartanegara in East Kalimantan province will cost around US$32 billion. The central administration is expected to be transferred from Jakarta to the new capital by 2024.

New ruling on foreign workers to focus on quality instead of quantity
(28 August 2020) New rules to limit foreign workers will focus on quality instead of quantity, while Singapore will remain “open and connected” as a financial hub, said Trade & Industry Minister Chan Chun Sing. On 27 August, Singapore announced increases in the minimum salaries for employment and S-pass holders, which would make it harder for firms to hire foreigners over locals. Employment pass holders must now earn US$3,293 (S$4,500) a month, up from US$2,860 (S$3,900), and S-pass holders must meet a US$1,800 (S$2,500) threshold instead of US$1,760 (S$2,400). Singapore’s private sector has been under pressure to balance its local and foreign workforce. The Monetary Authority of Singapore stated last week that it would intensify its engagement with the financial firms on their hiring practices to expand the Singaporean workforce.

Malaysia may keep its borders closed to international tourists until 2Q2021
(26 August 2020) Malaysia’s Minister of Tourism, Arts, and Culture Nancy Shukri stated recently that Malaysia may keep its borders closed to international travel until the second quarter of 2020. This follows a call made by the director-general of Malaysia’s health ministry Noor Hisham Abdullah on 25 August for a halt to further reopening of Malaysia’s borders in favour of a renewed clampdown to safeguard Malaysians. The remarks were made in view of COVID-19 infection spikes in countries that initially had it under control. For the first six months of 2020, Malaysia recorded a 68% drop in international tourist arrivals from the same period last year while inbound tourist receipts fell by 71% year-on-year. For the full year, Malaysia is projecting a more than 75% reduction in international visitors and expenditures, while domestic trips and expenditure will see a nearly 30% reduction.

Thai PM in talks with state agencies on how to reopen tourism sector after COVID-19
(27 August 2020) Thai Prime Minister Prayut Chan-O-Cha announced that he is in talks with state agencies on how to open the country to foreign tourists after the COVID-19 situation improves. Matters discussed included the timings for reopenings and which provinces will be the first to open for foreign tourists. The first phase may see a limited number of tourists allowed into the country and their areas of travel restricted. The Thai Hotel Association (THA) urged the government to reopen the country to foreigners, as hotels struggle with near-zero occupancy rates. Thai Airways International Plc (THAI) announced that it is ready to arrange special direct charter flights from six countries to Phuket. The airline can make two flights per month to Denmark, Germany, the UK, South Korea, Japan and Hong Kong.

Volume of goods through Vietnam’s seaports increases
(27 August 2020) The total output of goods that went through Vietnamese seaports in the first eight months of 2020 increased 6% year-on-year despite the impact of the COVID-19 pandemic, according to statistics from the Vietnam Maritime Administration. The volume of container cargo reached nearly 14 million twenty-foot equivalent units (TEUs), an increase of 8% over the same period in 2019 while container cargo reached more than 1.7 million TEUs in August, equivalent to a 7% year-on-year increase. Some seaport areas saw a rapid growth in volume growth, such as Quang Trị Port with more than 73% increase, and Quang Ngai with over 43% increase. Other seaport areas in Nam Dịnh, Can Tho, Thanh Hoa, and Thai Bình also saw increases of between 20% and 32% over the same period last year.

US Treasury Department claims Vietnam deliberately devalued currency in 2019
(26 August 2020) An investigation by the US Treasury Department argued that Vietnam had deliberately devalued its currency by about 4.7% against the dollar in 2019. The State Bank of Vietnam was believed to have facilitated net purchases of about US$22 billion worth of foreign exchange in 2019, which undervalued the dong in the range of 4.2% to 5.2%. Vietnam’s real effective exchange rate was also estimated to have been pushed down by 3.5% to 4.8%. A new federal rule in the US allows the Commerce Department to treat currency devaluation as a factor in determining countervailing duties on a trading partner. Vietnam could be cited by the US for a second violation in their semi-annual reports on foreign exchange policies of trading partners. Countries with two violations are added to a monitoring list.