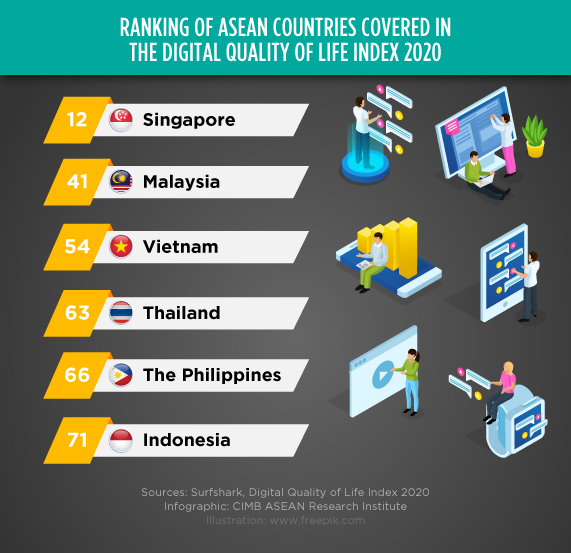 Singapore ranks highest in ASEAN in digital quality of life study
(19 August) Singapore leads ASEAN countries with a 12th place global ranking in the Digital Quality of Life Index 2020 conducted by privacy protection firm Surfshark. The city-state is followed by Malaysia (41st), Vietnam (54th), Thailand (63rd), the Philippines (66th) and Indonesia (71st). The index assesses 85 countries based on five pillars: internet affordability, internet quality, e-infrastructure, e-security and e-government. Singapore topped the internet quality pillar, with the fastest broadband and the eighth fastest mobile internet globally while Malaysia was among 13 countries that outperformed others in providing higher levels of e-security and more affordable internet connectivity. The study also found that governments in Southeastern Asia, Europe and North America are the most prepared to counter cyber threats. Globally, Denmark, Sweden and Canada topped the digital quality of life ranking.

RCEP to be signed without India, says Indonesia’s Trade Ministry
(18 August 2020) The Regional Comprehensive Economic Partnership (RCEP) has entered the legal scrubbing phase and is expected to be signed soon without India, according to the Indonesian Trade Ministry. Current participating countries comprising ASEAN member states, China, Japan, South Korea, Australia and New Zealand will keep the door open for India in case the country decides to rejoin the trade deal in the future, Deputy Trade Minister Jerry Sambuaga said in a statement on 13 August. India withdrew from RCEP negotiations in November 2019 due to concerns of its growing trade deficit with China. The situation worsened after the Indian army said at least 20 of its soldiers had been killed in clashes with Chinese troops at a disputed border site between the two countries in June 2020.

A total of 31 funding agreements for start-ups announced in second quarter of 2020
(20 August 2020) Indonesia’s start-ups can expect more funding in the future, with the country already enjoying the highest flow of capital in Southeast Asia after Singapore, said Sequoia Capital India. Digitalisation remains one of the growth areas for start-ups in the country, which has one of the more mature investing ecosystems in the region, the investment firm said during a webinar on 19 August. At least 31 funding agreements for Indonesian start-ups were announced in the second quarter of 2020, an increase from the 24 deals in the same period in 2019. Thirteen of the 31 funding agreements were made for seed-stage companies, such as the US$10 million in funds secured by supply chain start-up Ula and the seed funding for big data analytics firm Bonza in May 2020. Sequoia Capital India added that opportunities can also be found in “old-school” digital economy sectors such as e-commerce, cashless payments, mom-and-pop shops, and financial services.

The Philippines central bank keeps interest rates unchanged
(20 August 2020) The central bank of the Philippines, Bangko Sentral ng Pilipinas, kept its key interest rates unchanged as it takes a “prudent pause” to let previous rate cuts take effect within the economy. The benchmark interest rate remains unchanged at 2.25% on 20 August. The Philippines’ economy fell into recession in the previous quarter, as COVID-19 dampened consumption and drove job losses to a record high. The Philippine government is loosening restrictions to help spur growth with the economy expected to shrink by as much as 6.6% in 2020. Bangko Sentral ng Pilipinas has been among the most aggressive in Asia in terms of easing policy, cutting its key rate by 175 basis points so far this year. The central bank is next scheduled to set the key rate on 1 October 2020.

Australian poultry products temporarily banned due to bird flu outbreak
(19 August 2020) The Philippines temporarily banned poultry products from Australia in a 14 August order made public on 19 August after the highly pathogenic H7N7 avian flu virus was detected at an egg farm in Victoria. Australia accounts for less than 1% of the Philippines poultry imports. All incoming shipments from Australia with import clearances issued on or before 6 August 2020 will be allowed entry provided the poultry was slaughtered or processed on or before 3 July 2020. The Philippines has already experienced its own outbreaks of aviation flu, with the latest outbreak of the H5N6 subtype of the virus at an egg farm in Pampanga province in July 2020.

Thailand’s second quarter of 2020 GDP shrinks to its weakest in 22 years
(17 August 2020) Thailand’s GDP shrank 12.2% from a year ago, marking its largest decline since the Asian Financial Crisis in 1998, the National Economic and Social Development Council said on 17 August. The country’s economy has been deeply affected by the impact of COVID-19 on its two key drivers of the economy: trade and tourism. The pain has been compounded by the strong baht, which gained more than 6% in the April-June quarter. According to National Economic and Social Development Council secretary-general Thosaporn Sirisumphand, the council is particularly concerned about employment, bad debts and small and medium enterprises and will strive to take care of the country’s 16 million workers in the informal sector. The council cut its full-year GDP forecast for Thailand to a 7.3%-7.8% contraction, from an earlier estimate of a 5.0%-6.0% decline.

Malaysia’s recent quarterly GDP records worst decline since fourth quarter of 1998
(14 August 2020) Malaysia’s GDP contracted by 17.1% in the second quarter of 2020 (2Q2020) primarily due to the movement control order enforced to curb the spread of COVID-19, Bank Negara Malaysia (BNM) said during its virtual 2Q2020 briefing held on 14 August. According to Malaysia’s chief statistician Dr Mohd Uzir Mahidin, the quarterly contraction was the lowest growth ever recorded by the country since the Asian Financial Crisis when its GDP fell 11.2% in the fourth quarter of 1998. In the first quarter of 2020, Malaysia’s GDP grew 4.5%. All sectors recorded negative growth during 2Q2020, except for the agriculture sector, which grew 7.2%. Growth in the services sector fell 17.4%, while manufacturing declined 17.9%. However, BNM governor Nor Shamsiah Yunus said the gradual reopening of the economy from 4 May onwards has provided some relief to the economy and some signs of recovery have been observed.

E-commerce becomes more popular in Vietnam due in part to COVID-19 pandemic
(21 August 2020) E-commerce has become more popular in Vietnam in the past five years, particularly due to the COVID-19 pandemic, according to a forum held by the Institute for Brand and Competitiveness Strategy on 20 August. Vietnam’s internet users are projected to account for 60% of the population in 2020, while a further 33% of Vietnamese consumers will make direct money transfers online while shopping. However, a survey by the Vietnam Software and IT Services Association (VINASA) showed that although 95% of Vietnamese enterprises are aware of the importance of digital transformation, 84% of said businesses also failed to transform digitally and apply new technologies. During the forum, banks, payment gateways and telecommunication carriers were encouraged to create favourable conditions and have supporting policies for people to pay online and at the same time, create a shared database to minimise risks for customers.

Zoom opens new data centre in Singapore
(18 August 2020) Zoom Video Communications Inc., has opened a data centre in Singapore, diversifying its network and expanding into Southeast Asia for the first time. The popular conferencing app has seen a surge in global usage of its services during COVID-19 related lockdowns, but the increasing popularity of the app has also shone a spotlight on the vulnerabilities in its software encryption. The US-based company worked with Singapore’s Economic Development Board in setting up the new data centre, bringing the total of its global sites to 18. Zoom plans to hire an unspecified number of engineers and sales staff and offer new services such as Zoom Phone to scale the business in the region, Zoom’s head of international Abe Smith said during a virtual briefing on 18 August.

Collective wealth of tycoons on the 2020 Forbes Singapore Rich List rises 28%
(20 August 2020) Tycoons on the 2020 Forbes Singapore Rich List saw their collective wealth rise by 28% year-on-year from US$37 billion to US$167 billion. This is despite a declining economy which saw a 13.2% year-on-year drop in GDP in the quarter ending June 2020. The benchmark STI stock index also fell by 21% year-on-year. The minimum amount of wealth required to make the list increased to US$610 million this year from US$560 million in 2019. The list was compiled using shareholding and financial information obtained from the families and individuals, stock exchanges, analysts and other sources. Unlike the billionaire rankings, this list includes family fortunes. Singapore has become a magnet for tycoons from around the world and has benefited by providing a home for these wealthy expats with some taking citizenship.