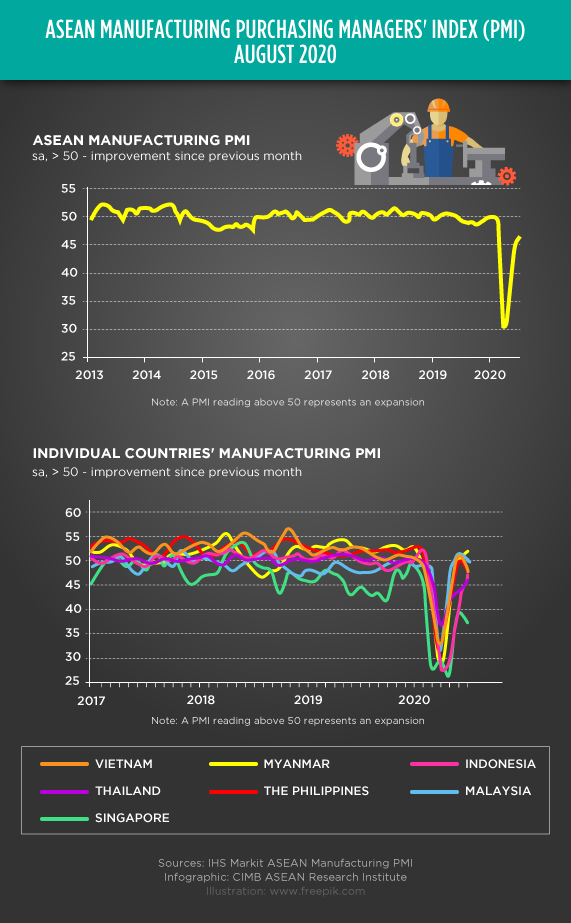 ASEAN manufacturing downturn continues to ease in July
(4 August 2020) Marketing conditions in ASEAN in July showed further deterioration due to the impact of the COVID-19 pandemic but the rate of contraction was the softest in the current five-month sequence of decline, according to the IHS Markit Purchasing Managers’ Index (PMI). Both factory production and new orders in the ASEAN displayed slower rates of decline. Headline PMI increased to 46.5 in July from 43.7 in June in the health sector, although the figure remained below the no-change 50.0 mark. Underlying data suggested that improvements in sales were primarily driven by stronger domestic demand. Across the seven ASEAN countries covered, only Myanmar registered an improvement in operating conditions in July at 51.7, its highest in six months, while Singapore recorded the worst performance as its headline figure dropped to 37.3 in July.

Revised trade agreement between ASEAN and Japan came into effect 1 August
(4 August 2020) A revised free-trade pact between Japan and the Association of Southeast Asian Nations (ASEAN) facilitating the cross-border flow of services and investment came into force on 1 August 2020. The agreement took effect for Japan, Laos, Myanmar, Singapore, Thailand and Vietnam. The five remaining members of ASEAN, Cambodia, Indonesia, Malaysia, Brunei and the Philippines, are set to join the pact once they conclude domestic procedures. Under the revised pact, the countries are required to maintain transparency in regulating services and not discriminate against foreign investors. It also established a dispute settlement mechanism for companies to sue a government for unfair treatment, as well as rules for foreign travellers to enter and stay in the other countries.

Thailand’s prepares electric vehicle industry for rapid growth
(4 August 2020) The electric vehicle (EV) market in Thailand, considered the most advanced among ASEAN countries, is expected to grow quickly between 2025 to 2030, according to the Electric Vehicle Association of Thailand (EVAT). Several of the association’s requirements for the EV industry have been adopted by the Thai government but EV investment and production have moved slowly due to high operating costs. EVAT chairman Yossapong Laoonual said EV technology is projected to be cheaper from 2025 and become more accessible to the public. EVAT has suggested the government use environmental policies to push EV use in the country, such as by promoting Euro 5 and 6 emission standards, which are set to be adopted in Thailand over the next few years. In September, EVAT will collaborate with Informa Markets to launch the ASEAN Sustainable Energy Week 2020 from 23-26 September.

Singapore retail sales record slower fall at 27.8%
(5 August 2020) Retail sales in Singapore in June fell at a slower pace than before, according to data from the Department of Statistics released on 5 August 2020. Takings at the till fell 27.8% compared with the same period in 2019, after recording a decline of 52% in May and 40.3% in April. Excluding motor vehicles, retail sales fell 24.2%. The latest retail figures follow the gradual reopening of the economy; Singapore entered Phase One on 2 June and Phase Two on 19 June. In June, year-on-year retail sales slumped for the 17th consecutive month. But compared to May, seasonally adjusted retail sales recorded a huge upswing, rising by 51.1%. Excluding motor vehicles, takings sales increased 43.1% month-on-month in June.

Malaysia’s government’s debts and liabilities currently stands at US$285.6 billion
(6 August 2020) Malaysia’s Finance Minister Tengku Datuk Seri Zafrul Abdul Aziz affirmed in parliament on 6 August that the government’s current debts and liabilities stood at US$285.6 billion (RM1.2 trillion) as announced by the political opposition coalition. He clarified, however, that this did not mean the current administration was “bankrupt,” as it is still able to pay its debts on time. In the first quarter of 2020, Malaysia’s federal debts stood at US$203 billion, while committed guarantees (including government-guaranteed projects and other liabilities) amounted to US$40 billion. The government’s debt in 2019 amounted to US$189.2 billion.

Philippine economy suffers deepest contraction in second quarter of 2020
(6 August 2020) The Philippines’ economy suffered its deepest contraction on record in the second quarter of 2020, with its GDP shrinking 16.5% year-on-year. On a quarter-on-quarter basis, GDP declined by 15.2%, with the second consecutive quarter of decline suggesting an economy in recession. The Philippines have now revised its GDP forecast for 2020 to shrink by 5.5%, down from earlier estimates of between 2.0% and 3.4%. The Philippines is expected to experience one of the region’s slowest recoveries due to a continued failure to contain the COVID-19 virus, ongoing restrictions on movement, and inadequate government support policies.

Economy contracts for the first time in two decades in second quarter of 2020
(5 August 2020) Indonesia’s economy contracted for the first time in more than two decades in the second quarter of 2020, with output slumping by 5.3% year-on-year in the April-June period. This is the first contraction since the first quarter of 1999 during the Asian Financial Crisis. The contraction was attributed to the government’s failure to contain the COVID-19 outbreak as well as inadequate support measures for affected Indonesians. The Indonesian government promised more aggressive fiscal measures in the second half of 2020 to avoid further contractions, having already budgeted US$48 billion worth of stimulus.

Myanmar’s economy projected to recover at a faster pace than its neighbours
(7 August 2020) Myanmar’s economy is expected to recover at a faster pace than its regional neighbours, according to a 28 July report by the Oxford Business Group. The rapid economic recovery was attributed to Myanmar’s relatively successful containment of COVID-19, as well as its relatively fast growth rate in recent years. The report said Myanmar’s government was able to successfully reduce the burden on the economy and households, as well as transition the national export/import licensing system to an online system, liberalised its license requirements, and reduced taxes and interest rates. The country is also working on improving its healthcare infrastructure and services.