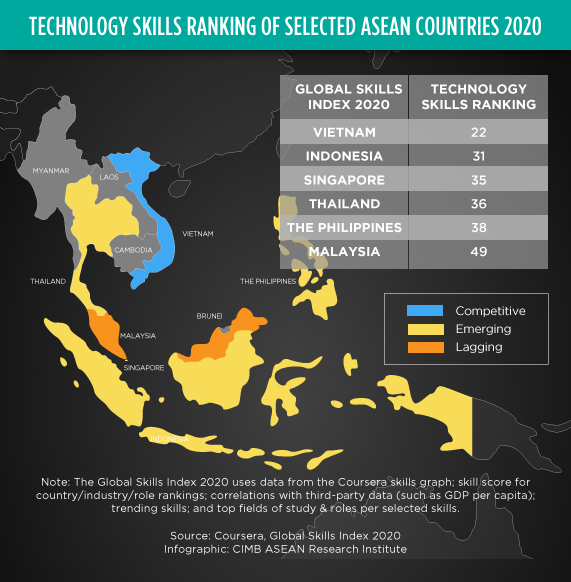 Vietnam’s technology skills set ranks second in Asia Pacific, first in ASEAN
(21 July 2020) Data from Coursera’s Global Skills Index 2020 report rated Vietnamese technology skills second in Asia Pacific, 22nd globally and first in ASEAN. In the report published last week, the higher education online learning platform benchmarked 60 countries and 10 industries for business, technology, and data science skills, which are deemed critical to compete in an increasingly digital world. The report gave Vietnam’s technology skills a “competitive” rating, the second-highest proficiency level behind “cutting-edge” and above “emerging” and “lagging.” The country’s strongest skill in the technology domain is operating systems (Android and iOS software development) at “competitive” level. The rest of the ASEAN countries assessed in the report received an overall technology skills rating of “emerging” except for Malaysia which obtained “lagging.” According to Coursera data, every skill proficiency percent gained in a country’s average proficiency (across domains) is associated with a US$600 increase in per capita GDP.

ASEAN+3 discusses COVID-19 response plans
(21 July 2020) China, Japan and South Korea affirmed their support for ASEAN’s initiatives in promoting cooperation in response to the COVID-19 pandemic at the ASEAN+3 Senior Officials’ Meeting held via video conferencing on 20 July. During the meeting, South Korea pledged to allocate US$1 million for the COVID-19 ASEAN Response Fund while Japan will continue to support ASEAN in establishing a regional centre for disease control and response. China committed to support ASEAN countries through programmes aimed at strengthening preventive medicine capacity. ASEAN leaders also suggested China, Japan and South Korea enhance coordination in the research and production of vaccines against COVID-19, as well as in regional common efforts to mitigate the impact of the pandemic

ASEAN Online Sale Day set for 8 August
(21 July 2020) The ASEAN Online Sale Day (AOSD) is set to take place on e-commerce platforms across ASEAN on 8 August, the Vietnam e-Commerce and Digital Economy Agency (IDEA) under the Ministry of Industry and Trade have announced. An initiative of Vietnam within ASEAN’s cooperative framework, the AOSD will be the first online shopping event conducted simultaneously throughout the entire ASEAN region. A website dedicated to AOSD featuring businesses participating in the programme has been launched. More than 100 e-commerce businesses from ASEAN member nations are expected to join the online retail gala. The event is expected to support and facilitate the development of commerce and e-commerce in the region, while promoting digital integration and building trust and credibility for ASEAN businesses, especially small and medium-sized enterprises trying to overcome the difficulties caused by the COVID-19 pandemic.

Government aims to conduct “targeted lockdowns” while rebuilding economy
(22 July 2020) The second phase of the Philippine government’s National Action Plan (NAP) to fight the COVID-19 pandemic will focus on balancing Filipinos’ health and the gradual reboot of the economy, National Action Plan (NAP) on COVID-19 chief implementer, Secretary Carlito Galvez Jr., said on 22 July. According to him, NAP Phase II will be based on the “hammer and dance” theory whereby the government shall continue to contain the spread of the virus through its targeted lockdowns, while slowly rebuilding the economy. If required, local government units (LGUs) will be tasked to impose “granular targeted lockdowns,” to further contain the transmission of the virus within their areas. Galvez said that the government was also strengthening the expansion of the country’s actual testing capacity and is aiming to test as much as 10% of the population.

New framework for Singapore business events to resume safely
(22 July 2020) A risk management framework for business events with up to 50 attendees has been developed by the Singapore Tourism Board (STB), as it prepares for the safe resumption of business-to-business (B2B) events in the coming months. STB will conduct a trial of the new framework with two pilot “hybrid” events before gradually scaling up to other events and event organisers. Hybrid formats will have a combination of face-to-face and virtual interactions. STB said event organisers and event venues must demonstrate readiness and capabilities which will meet five outcomes needed for the resumption of B2B events in a safe and controlled manner. The five outcomes are infection control measures for every stage of an event attendee’s journey (pre to post-event), limits on crowd density, limits on close contact between individuals, ensuring a safe and clean environment, and preparing for COVID-19-related emergencies.

Thai professor calls for delay of travel bubble for at least six months
(22 July 2020) A Thai top medical professor has suggested that the government’s proposed “travel bubble plan,” should be shelved for at least another six months due to the high-risk of COVID-19 infections and second wave spikes in many parts of the world. The Thai government’s proposed “travel bubble plan” will allow small groups of foreign tourists to visit the country. Dr Thira Woratanarat, Associate Professor at the Faculty of Medical Science of Chulalongkorn University warned against the opening up of Thailand, saying that not a single country has escaped a second wave of infections after allowing foreign arrivals, noting that the screening system is not 100% accurate. Out of around 30,000 arrivals, Thira said 0.5%, or 150 might be found to be infected. Out of these, 20 might escape detection, and therefore, the need for quarantine.

Indonesia to produce 100 million doses of COVID-19 vaccine
(22 July 2020) Indonesia’s state-run pharmaceutical company Bio Farma plans to produce 100 million doses of COVID-19 vaccine once the final stage of clinical tests have been completed, President Joko Widodo announced on 22 July. The vaccine is being developed by China’s Sinovac Biotech which is currently conducting Phase 3 clinical trials in Brazil. According to Jokowi, Indonesia will join in the Phase 3 trials involving 1,620 volunteers and the process will be overseen by the BPOM (Drug and Food Control Agency). At the initial stage, the company will produce 40 million doses of the vaccine before expanding it to 100 million. Sinovac was appointed as Bio Farma’s partner due to the similarity in the two companies’ vaccine production platform. Before human trials begin, the Sinovac vaccine must undergo laboratory tests at Bio Farma. According to the company, human trials are expected to take place at Padjadjaran University’s Medical Faculty in Bandung, West Java.

Government admits slow disbursement to small businesses
(23 July 2020) The Indonesian government has disbursed US$809.1 million (Rp 11.84 trillion) from the COVID-19 stimulus package to small businesses and cooperatives as of 21 July but conceded that it had been slow in disbursing the funds. The disbursement is part of the government’s national economic recovery (PEN) programme, which will allocate US$8.5 billion (Rp 123.46 trillion) to aid small businesses and cooperatives amid the ongoing COVID-19 pandemic. The amount disbursed made up only 9.59% of the total budget. According to ministry data, most of the stimulus was disbursed through state-owned banks in the form of debt restructuring funds, US$26.2 million (Rp 381.4 billion) went to investment funds for 34 cooperatives, while the remaining was used for interest subsidies for MSMEs. The government aims to disburse all the funds by September 2020 by accelerating spending with the issuance of the Finance Ministry’s budget execution lists (DIPA).

Brunei to enter final phase of de-escalation plan on 27 July
(23 July 2020) Brunei will loosen the limit on public and social gatherings from 50 to 100 people as it enters the fourth and final phase of its de-escalation plan on 27 July, following no reports of new COVID-19 cases for over two months. The revised mass gathering guidelines will apply to workplace events, weddings, religious activities, family get-togethers and charity events. Health minister Dr Mohammad Isham made the announcement during a press conference attended by seven cabinet ministers on 22 July. However, he warned that the pandemic is not over and that the public should stay vigilant and practise social distancing as part of the “new normal.” Members of the public will still be required to comply with physical distancing guidelines even when businesses and public services return to full operations.

Suu Kyi and U Win Myint to represent Yangon constituencies in election
(23 July 2020) Myanmar’s State Counsellor Aung San Suu Kyi and President U Win Myint are slated to take part in an upcoming general election by representing two constituencies of Yangon region, Zaw Myint Maung, vice chairman of the ruling National League for Democracy (NLD) party told media on 23 July. Suu Kyi, in her capacity as the party’s chairperson, will run for the election in Kawhmu township while U Win Myint will represent Tamwe township constituency of Yangon region. Over 1,100 representatives from the ruling NLD party will take part in the general election scheduled to be held on 8 November 2020, he said. It is estimated that around 37 million people are eligible to vote in the election while 97 political parties are registered to take part in the vote. The five-year term of the incumbent NLD government will end in March 2021.