CARI Captures 463: Asset quality of banks in ASEAN economies expected to weaken due to COVID-19 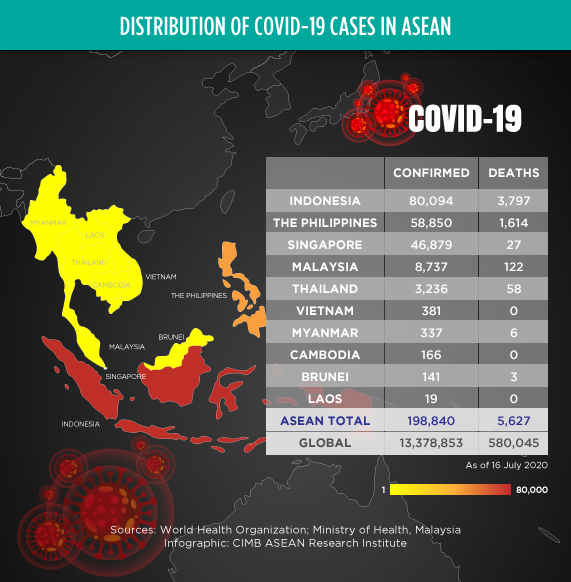 Asset quality of banks in ASEAN economies expected to weaken due to COVID-19
(13 July 2020) The challenging economic and credit conditions caused by the COVID-19 pandemic is expected to weigh on the asset quality and profitability of banks in ASEAN countries and India, according to Moody’s Investors Service. The bond credit rating firm expects asset quality and profitability to deteriorate from “good” levels in 2019 across most banking systems. It noted that while government support measures will offset some of the pressure, they will not fully eliminate the negative impact. Despite the challenging outlook, the majority of banks are adequately capitalised, and Moody’s expects their funding and liquidity to remain sound and stable in 2020 and 2021. For instance, regulators in Thailand, Vietnam and India have restricted bank dividends; a credit positive for banks, while the largest banks will continue to benefit from deposit inflows as they are seen as safe-havens in times of stress.

COVID-19 pandemic wipes out US$5.9 billion of Indonesia’s tourism revenue
(14 July 2020) The Indonesian tourism industry has seen its revenue fall by US$5.9 billion (Rp 85 trillion) so far in 2020, forcing business associations to call on the government to provide a greater stimulus for the industry. According to Indonesian Hotel and Restaurant Association (PHRI) chairman Hariyadi Sukamdani, more than 95% of workers in the tourist sector are being furloughed without pay and 2,000 hotels and 8,000 restaurants have closed during the first three months of the outbreak. Data from PHRI has shown that the hotel and restaurant industry has lost nearly US$4.8 billion (Rp 70 trillion) in revenue as leisure travel has come to a complete halt, while aviation and tour operators have lost US$1.0 billion (Rp 15 trillion) in revenue. Indonesia’s foreign visitor arrivals fell 86.9% year-on-year in May to 163,646, according to Statistics Indonesia (BPS) data.

Nearly one-third of tourism business operators at risk of closure
(13 July 2020) The Tourism Council of Thailand estimates that up to 30% of tourism-related businesses in Thailand are at risk of shutting down permanently in the next three months as the firms will run out of liquidity to keep their businesses afloat in the second half of 2020. The council had previously proposed five measures to help tourism business operators to the Prime Minister during a meeting on 10 July. The proposed measures included providing soft loans to tourism entrepreneurs, moving up the schedule to open the country to foreign tourists, offering discounts on electricity bills, having the Social Security Office extend the compensation payment to temporarily unemployed staff from June to December, and reducing the employer’s contribution to Social Security Fund from 4.0% to 1.0%.

Malaysia and Singapore to start green lane for business travel
(14 July 2020) Malaysia and Singapore will implement a reciprocal green lane for cross-border travel between both countries, according to a press statement from the two countries’ ministries of foreign affairs. The green lane will enable cross-border travel for essential business and official purposes. Officials from both countries are working toward a target start date of 10 August. Eligible travellers will need to abide by existing COVID-19 prevention and public health measures which have been mutually agreed upon by both countries. The travellers will be expected to submit a controlled itinerary and adhere to it. Both countries will allow residents who hold long-term passes for business and work purposes in the other country to enter that country for work. After three consecutive months in their country of work, they may be permitted to return to their home country for short-term leave and then re-enter for at least another three months.

Malaysia vulnerable to sovereign ratings downgrade
(17 July 2020) Malaysia is at risk of a sovereign ratings downgrade due to its limited fiscal space and higher exposure to the global exports markets, according to Nomura. In a media conference call held on 17 July, Nomura said that Malaysia has less fiscal room due to its fairly high level of government debt. Nonetheless, it is believed that Malaysia may benefit from China’s diversification or trade relocation. Nomura expects Malaysia’s GDP to contract 5.8% in 2020, in comparison to Bank Negara Malaysia’s growth forecast of between -2.0% and 0.5% in the same year. The firm also expects further easing of another 25 basis points from the central bank in 2020. This is in line with the Malaysian government’s expectation that fiscal deficit is to increase to between 5.8% and 6.0% of GDP in 2020, following the implementation of the government’s stimulus programmes.

Indonesia’s central bank cuts interest rates for the fourth time in 2020
(16 July 2020) Indonesia’s central bank has cut its interest rate for the fourth time in 2020, with policymakers at Bank Indonesia reducing the key lending rate by 25 basis points to 4.0%. Central bank governor Perry Warjiyo stated that the latest rate cut was the “further step” to boost the country’s struggling economy. Indonesia’s finance minister Sri Mulyani Indrawati warned that Indonesia’s economy is set to contract by 4.3% in the second quarter of 2020, and shrink again in the July-September period. Two consecutive quarters of negative growth would mark Indonesia’s first recession since the 1998 Asian Financial Crisis. Indonesia has announced a stimulus package worth more than US$48 billion to help offset the impact of COVID-19, which forced a large-scale shutdown that impacted growth, particularly in the key tourism sector.

BOI-approved foreign investments drop 73% in first half of 2020
(13 July 2020) Foreign investment pledges approved by the Board of Investments (BoI) fell by more than 70% in the first half of 2020 as investors abroad hold off expansion plans amid the onslaught of the COVID-19 pandemic. According to data from the Department of Trade and Industry (DTI) released on 13 July, BOI-approved pledges by foreign businessmen declined by 73% in the first six months of 2020 to US$375.4 million (P18.6 billion), lower than US$1.4 billion (P68.9 billion) registered in the same period in 2019. On the other hand, BOI-approved pledges by Filipino businessmen soared 166% year-on-year to US$12.7 billion (P626.7 billion) from January to June 2020, data showed. If both foreign and domestic investment commitments are combined, total BOI-approved investment in the first half of 2020 stood at US$13.0 billion (P645.3 billion), 112% higher compared to the same period last year.

Thai businesses to help Vietnamese partners join supply chains
(14 July 2020) Thai businesses will support their Vietnamese partners in taking part in regional supply chains and industrial production in the near term, the Director of the Thai Department of International Trade Promotion (DITP), Suparporn Sookmark said on 14 July. In the context of the COVID-19 pandemic, the department plans to hold both online and offline trade exchanges to help maintain links between enterprises. The DITP will continue diversifying trade promotion activities and making it easier for Vietnamese and Thai firms to tap into potential markets and seek business cooperation opportunities. Chairwoman of the Thai Business Association in Vietnam, Saranya Skontanrak, said Vietnam and Thailand, both members of the ASEAN Economic Community, should join hands to boost economic diversity and attract international investors as well as set up production and supply networks in the region.