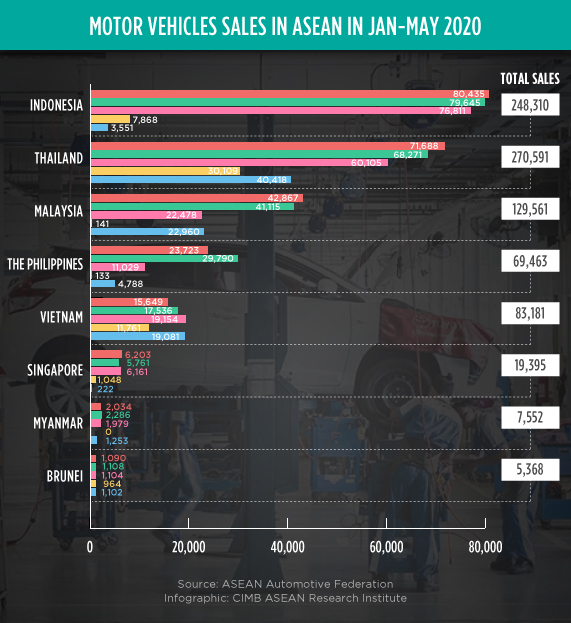 Brunei records highest car sales growth in ASEAN while regional output declines
(8 July 2020) Brunei recorded an 8.0% year-on-year increase in car sales in the first five months of 2020, the highest car sales growth in ASEAN, where nationwide lockdowns or partial lockdowns due to the COVID-19 pandemic has considerably slowed down vehicle sales in the region. According to statistics from the ASEAN Automotive Federation, with the exception of Myanmar, which also recorded a positive growth of 4.7%, the rest of the ASEAN member countries recorded a drastic drop in car sales ranging from as low as between -34% to -53%. Meanwhile, vehicle production in the ASEAN region during the January-May period of 2020 dropped by 39.2% year-on-year to 1.08 million, due to the impact of COVID-19. In the same period, Thailand’s vehicle output fell 40.2% year-on-year, while Indonesia’s vehicle production was down by 32.6% year-on-year. Malaysia recorded the largest year-on-year decline for that period, its vehicle production declined by more than half (51.1%) to 121,005 units.

Southeast Asia investment activity in 1Q2020 falls 65% to US$1.4 billion
(8 July 2020) Private equity (PE) and venture capital (VC) investment activities across Southeast Asia have slowed down in the first quarter of 2020 (1Q2020) amid the COVID-19 pandemic, according to a report released by an advisory firm. A total of 141 deals worth US$1.4 billion were announced in 1Q2020, representing a 9% and 65% year-on-year decline in the total number of deals and value, respectively. Announced PE and VC-backed exits declined to six deals from nine in the first quarter of 2019. The report also noted the amount of undeployed funds reached record levels of US$439 billion by mid-May 2020 and expects the second quarter of 2020 to be a slow quarter as well. Due to the COVID-19 outbreak over the past eight to 12 weeks, PE funds have focused on dealing with issues and making short-term adjustments to ensure the business has sufficient resources and support to weather the storm.

Malaysia’s central bank announced new e-KYC guideliness
(30 June 2020) Bank Negara Malaysia issued its policy document on Electronic Know-Your-Customer (e-KYC) on 30 June, following an earlier exposure draft it prepared in December 2019. This new policy is effective immediately for all financial institutions including banks, insurers, remittance companies and money changers. The central bank said that the introduction of the policy was in line with its effort to facilitate greater digital offerings of financial services. The policy document aims to accelerate and streamline practices of industry players in their adoption of e-KYC technology, the online process of identifying and verifying individual customers. The policy document states that financial institutions may rely on humans to conduct e-KYC via video calls or utilise technology like AI, machine learning and predictive algorithms to manage the process.

Malaysia’s industrial production index drops 22.1% year-on-year in May 2020
(9 July 2020) Malaysia’s industrial production index (IPI) dropped 22.1% year-on-year in May 2020. This is due to decreases in all three components of the IPI: manufacturing component (-23.2%), the mining component (-22.2%), and the electricity component (-10.3%). However, the annual contraction in May is smaller than the record 32% slump posted in April. On a month-on-month basis, the IPI in May 2020 increased by 18.2% since more industries were allowed to resume operations after a temporary closure of most manufacturing plants in compliance with the country’s Movement Control Order.

Jet engine maker Rolls-Royce to cut 240 jobs in Singapore due to COVID-19 impact
(9 July 2020) British jet-engine maker Rolls-Royce will cut about 240 jobs in Singapore due to the impact of COVID-19 on the aerospace industry. The layoffs will start in mid-August as part of a global restructuring. Rolls-Royce employs about 1,000 people making fan blades and assembling and testing engines at Seletar Aerospace Park. The layoffs will impact about 24% of the workforce. The lay-offs come after the engineering giant announced in May that it would slash at least 9,000 jobs worldwide, or over 17% of its global headcount. Rolls-Royce has been working with the Singapore Industrial and Services Employees’ Union and NTUC’s Employment and Employability Institute (e2i) to help affected workers.

Data shows economy starting to recover from pandemic
(8 July 2020) The Philippines economy is starting to rebound from the COVID-19 pandemic but returning to positive growth depends on proactive implementation of the economic recovery programme, said acting Socioeconomic Planning Secretary Karl Kendrick Chua on 8 July. He said that based on data obtained for March and April, data on trade and production are starting to show improvements. He also cited the Purchasing Managers’ Index (PMI) which indicated that manufacturing performance improved to more normal territories in June from the contraction in April and May. Finance Assistant Secretary Jose Antonio Lambino II said the Bureau of Customs (BOC) surpassed last month’s collection target by 4.4% to US$860 million (PHP42.54 billion), compared to the June target of US$823 million (PHP40.74 billion). He said this was another sign of rising economic activity in the country.

Filipino peso strengthens by 2% against dollar in 2020 due to dropping imports
(10 July 2020) The Filipino peso is the best performer in Asia in 2020, having gained 2% against the US dollar. This was attributed to a collapse in imports into the Philippines, leading to lower demand for foreign currencies and helping to strengthen the peso. Imports slumped by 41% year-on-year in May 2020, after a 65% drop in April. A smaller gap in the Philippines’ trade deficit is expected to offset the impact of a decline in remittances from the Philippines’ diaspora communities, which is also expected to impact the peso.

Planned acquisition of stake into Japan’s Eneos refinery by Petrolimex stalls
(9 July 2020) Vietnam’s top gasoline seller Petrolimex’s planned acquisition of a stake in a Japanese refinery owned by Japan’s oil company Eneos has fallen by more than a year behind schedule due to expected political changes in Vietnam in January 2021. The Vietnamese government is reportedly holding off on major decisions ahead of the upcoming overhaul in the Communist Party’s leadership. Petrolimex had agreed in 2018 to invest in a Japanese refinery built and run by Eneos and export the gas to Vietnam. A joint venture to run the refinery was to be established in April 2019, but this has yet to be approved by the Vietnamese government. The planned joint venture involves the Eneos-owned Marifu refinery in Japan’s Yamaguchi Prefecture. Petrolimex currently runs about 5,000 filling stations in Vietnam, but it lacks an oil refinery.

Tourism sector to receive UNWTO support for post-pandemic recovery
(6 July 2020) The World Tourism Organization (UNWTO), the United Nations agency responsible for the promotion of responsible, sustainable and universally accessible tourism, said that it will support Cambodia in restoring its tourism sector after the COVID-19 pandemic ends. The announcement was made during the UNWTO 32nd meeting via video conferencing on 30 June. According to a local news outlet, Tourism Minister Thong Khon said that the UNWTO has regarded Cambodia as a priority country in Asia-Pacific and Southeast Asia to receive technical assistance to support the restoration of the country’s tourism sector post-COVID-19. He added that the UNWTO will assist Cambodia with human resource development and exchange experiences in managing the tourism sector after the pandemic.