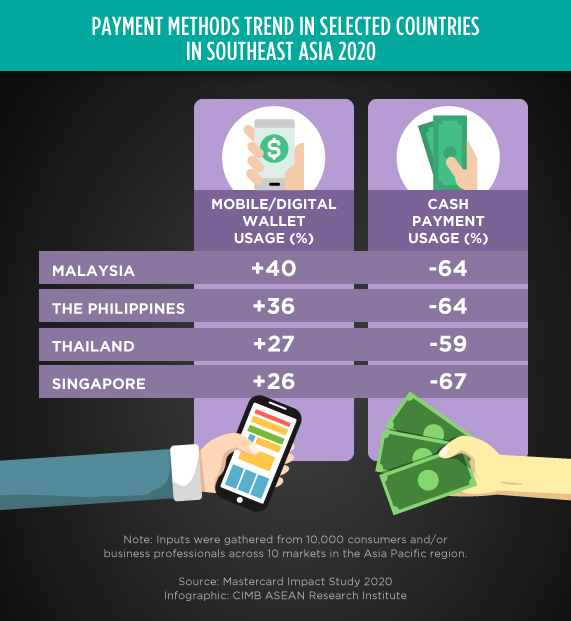 Malaysia leads mobile wallet usage in Southeast Asia
(24 June 2020) Malaysia has the highest mobile/digital wallet usage in Southeast Asia at 40%, ahead of the Philippines (36%), Thailand (27%) and Singapore (26%), according to the Mastercard Impact Study 2020. Malaysian consumers also shifted to other payment methods, such as contactless debit cards (26%) and contactless credit cards (22%), while cash usage declined 64% since the beginning of the pandemic. Singapore, the Philippines and Thailand also reduced their cash usage by 67%, 64% and 59% respectively, with a similar increase seen in use among all contactless payment methods. The report noted that even as countries in the region start to ease the restrictions and prepare for the “new normal,” some of the trends and habits formed in response to the pandemic would likely remain.

ASEAN leaders reaffirm commitment to mitigate impact of COVID-19 at 36th Summit
(26 June 2020) ASEAN leaders adopted the “ASEAN Leaders’ Vision Statement on A Cohesive and Responsive ASEAN: Rising Above Challenges And Sustaining Growth,” which, among others, recognised the social and economic repercussions of the COVID-19 pandemic. The 36th ASEAN Summit was held virtually and hosted by the 2020 ASEAN Chair, Vietnam, from Hanoi. In the document, the leaders reaffirmed strong commitment to alleviating the adverse impact of the pandemic on people’s livelihood, societies and economies, among others, through the implementation of a comprehensive recovery plan. The leaders of the regional grouping also agreed to sustain the momentum of ASEAN community-building and be forward-looking in charting the continuing development of ASEAN beyond 2025.

Malaysia’s exports suffer worst decline in 11 years
(29 June 2020) Malaysia’s exports suffered a sharp decrease by 25.5% year-on-year to US$14.6 billion (RM62.7 billion) in May 2020. This was its biggest fall since May 2009. It was the second consecutive month with a double-digit decline for exports after a 23.8% year-on-year decrease in April to US$15.1 billion (RM64.9 billion). According to the Department Of Statistics Malaysia (DOSM), the country’s imports similarly suffered a worst drop since January 2009. Imports fell 30% to US$12.2 billion (RM52.3 billion) year-on-year. Although the country’s trade balance returned to a surplus of US$2.4 billion (RM10.4 billion) in May, after registering its first monthly deficit in over 22 years in April, Malaysia’s exports recorded a decrease at a slower pace than that of imports, said the DOSM.

VN-Index rebounds, propped up by PMI data and interest cuts
(2 July 2020) Vietnam’s benchmark VN-Index surged on 1 July after a six-day losing streak as investor sentiment improved following solid data of PMI in June 2020 and steep cuts in interest rates of some banks. The VN-Index recouped 2.23% to close at 843.49 points on 1 July after losing 5.4% in the previous six sessions. IHS Markit data released on 1 July showed that Vietnam Manufacturing Purchasing Managers’ Index (PMI) posted 51.1 in June, up from 42.7 in May and above the 50.0 no-change mark for the first time in five months. The reading represented a continuation of the recovery seen since the PMI hit a record low in April. According to an analyst, the business results in the first quarter of 2020 were pessimistic, but opines that the market has recovered recently thanks to investors’ confidence in the economic support packages by the government and that businesses will soon return to normal and resume activities.

Home prices fall by most in three years in 2Q20 due to city-wide shutdown
(2 July 2020) Home prices in Singapore fell the most in three years in the second quarter of 2020, due to the city-wide shutdown caused by COVID-19. Property prices declined by 1.1% quarter-on-quarter in the second quarter, a slight increase from the 1% decrease in the first quarter of 2020. Singapore’s shutdown, which only started easing on 19 June, sent housing sales plunging to a near six-year low in April 2020, after which sales rebounded in May. Analysts forecast that housing prices may fall by between 3% to 6% in 2020 due to macroeconomic uncertainties.

Indonesia mulling the return of banking regulatory authority to central bank
(2 July 2020) Indonesian President Joko Widodo is considering issuing an emergency decree which would transfer regulatory authority over the banking system from the Financial Services Authority (OJK) back to Bank Indonesia, amidst concerns that the COVID-19 pandemic is exposing strains in the financial system. The Indonesian government is considering adopting the French model of having an independent administrative authority under the central bank which would oversee the banking system. In early 2020, Indonesia’s supreme audit board had referred to the OJK’s supervisory role over the financial system as “weak,” pointing to loopholes in its oversight of seven banks. However, on aggregate, the banking system has been referred to as “secure” by the OJK.

Japan to possibly discuss with Brunei to ease COVID-19-related travel restrictions
(2 July 2020) Japan might open talks with Brunei as early as July 2020 to ease COVID-19-related travel restrictions between both countries. Business travellers are to be given priority, followed by students and then tourists. Travel to and fro Japan has virtually stopped since restrictions were imposed, with a 99.9% drop year-on-year in foreign arrivals in May 2020. A total of 129 countries and regions are currently on Japan’s entry ban list, with foreign travelers who have been to any of the areas within 14 days being turned away. Travel between Japan and Vietnam was partially resumed on 25 June, with a chartered flight to Vietnam carrying 150 passengers, mainly business people.

Japan extends US$464 million loan to the Philippines to help fight COVID-19
(1 July 2020) Japan will extend a US$464 million loan to the Philippine government to help finance the country’s emergency measures to fight COVID-19. This makes the Philippines the first recipient of the highly concessional COVID-19 Crisis Response Emergency Support Loan designed by Japan to help ease the global health crisis. The loan is co-financed by the Asian Development Bank, and adds to the US$18 million Japanese grant aimed at providing Philippine hospitals and institutions with advanced medical equipment. The Philippines government has raised a further US$4.83 billion in concessional loans for its COVID-19 response from the World Bank, Asian Infrastructure Investment Bank, and the Agence Française de Développement.

Thailand prepares for haze
(30 June 2020) Thai authorities have warned that seasonal haze in the southern parts of the country is expected to be worse in 2020 due to droughts in neighbouring countries. The ASEAN Specialised Meteorological Centre (ASMC) said that temperatures in the lower parts of the region are expected to rise from July to September, leading to a possibility of intense transboundary haze pollution in the south. According to a local news outlet, this has prompted the Environment Ministry to call on agencies to prepare measures to limit the damage. Minister of Natural Resources and Environment Varawut Silpa-archa said the Pollution Control Department will be the main agency to invoke the ASEAN Agreement on Transboundary Haze Pollution and ask for cooperation from related countries to address the issue.