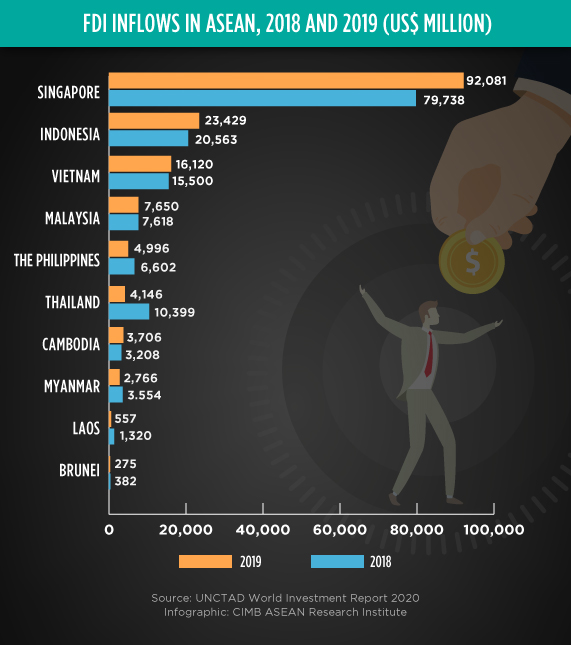 Southeast Asia’s FDI inflows increased 5% in 2019
(16 June 2020) Southeast Asia saw its foreign direct investment (FDI) rise by 5% to a record level of US$156 billion in 2019, according to a report by the United Nations Conference on Trade and Development (UNCTAD). Growth was mainly driven by strong investment in Singapore (US$92 billion), Indonesia (US$23 billion) and Vietnam (US$16 billion), which received more than 80% inflows into the region. Investments into the region came from other Asian economies, the US and ASEAN countries with manufacturing and services making up most of the inflows to Southeast Asia. Cambodia recorded its highest ever FDI, at US$3.7 billion, while FDI inflow to Malaysia was flat at US$8 billion. Investment in Myanmar, Laos, the Philippines and Thailand fell. Due to the impact of COVID-19, UNCTAD forecasts a decline of up to 30%-40% for FDI in Asia and a drop of 40% for global FDI.

Myanmar finalises second Investment Policy Review with OECD’s help
(25 June 2020) Myanmar’s Ministry of Investment and Foreign Economic Relations (MIFER) finalised its second Investment Policy Review (IPR) with help of the Organization for Economic Cooperation and Development (OECD) on 23 June. The report will help identify further policy reforms needed to make the country a more attractive investment destination. The report is expected to be published in the next three months. While the first IPR, conducted in 2014, focused on investment promotion and facilitation, financial sector reform, infrastructure development and responsible business conduct, the second IPR will focus on areas such as connectivity, green growth-focused investment frameworks, secure and well-defined land rights, and enhancing the role of economic zones. Myanmar is reportedly on track to meet its FDI target of US$5.8 billion for the 2019/2020 fiscal year.

Malaysia’s economy projected to contract 3.1% in 2020, grow 6.9% in 2021
(25 June 2020) Malaysia’s economy is expected to contract by 3.1% in 2020 due to the slowdown in economic activity caused by COVID-19 but is projected to grow 6.9% in 2021 as the outbreak eases, according to a World Bank report released on 25 June. In the first quarter of 2020 (Q1 2020), the country’s exports of goods and services declined for a third consecutive quarter by 7.1%, its largest decline since the global financial crisis in 2009. Investment, on the other hand, contracted for the fifth consecutive quarter by 4.6% in Q1 2020 compared to a contraction of 0.7% in Q4 2019. Meanwhile, private consumption moderated to 6.7% in Q1 2020, down from 8.1% in the previous quarter, mainly due to the impact of COVID-19 and the Movement Control Order on retail, travel, leisure and recreational spending and consumption of durable goods.

Myanmar lays out three-phase recovery plan to reinvigorate tourism industry
(26 June 2020) Thailand’s Finance Ministry plans to ramp up its debt sales in an effort to raise a major portion of the US$32 billion it is borrowing for its financial stimulus programme. There seems to be growing concern over the increasing indebtedness of the Thai government, with steepening yield curves and slackening demand seen at the latest sale of five- and 15-year bonds last week. One analyst argued the Thai government should focus on increasing the supply of short-to-medium maturity sovereign bonds and retail savings bonds to mitigate the risks of higher long-tenor bond yields. The bond market may also benefit from the return of foreign investors, with overseas funds buying a net total of US$1.1 billion in Thai bonds in June 2020.

Thailand’s property market strengthening
(25 June 2020) Philippine central bank, Bangko Sentral ng Pilipinas, cut its benchmark interest rate by 50 basis points, as the country braces for its deepest economic slump in more than three decades. On 25 June, the central bank lowered its key rate to 2.25% from 2.75%. As of now, the central bank has cut interest rates by 175 basis points in 2020, as well as cut reserve ratios for banks and pumping liquidity into the financial system. The governor of the central bank, Benjamin Diokno, had previously signalled his preference for keeping real interest rates positive, meaning there may be little scope for further easing.

Philippine-Japan trade fall by more than half in April 2020
(24 June 2020) The Philippines’ Department of Budget and Management (DBM) said it is preparing a 2021 national budget of US$86 billion (P4.3 trillion), which will focus on measures to address unemployment resulting from the COVID-19 pandemic. According to Budget Secretary Wendel E. Avisado, the spending plan for 2021 will be aligned with the government’s priorities by setting a high priority on dealing with the consequences of the outbreak, which wiped out livelihoods and jobs. He said in a briefing that the budget will focus on labour-intensive projects and activities to provide income to the most vulnerable and most affected in both the private and public sectors. A report by the Department of Labor and Employment (DOLE), revealed that 90,215 workers from 3,189 establishments have been displaced nationwide since January 2020.

Garment manufacturers urge government to temporarily suspend minimum wage
(23 June 2020) A group representing garment factories in Cambodia have urged the government to temporarily suspend the minimum wage of US$190 as the sector struggles with the COVID-19 pandemic. Cambodia’s apparel and footwear sector remains vital to the economy, generating US$10 billion in annual exports and employing 800,000 people. Since COVID-19, more than 250 factories employing some 130,000 workers have suspended operations. The Ministry of Labour, however, stated it was not aware of any proposal while Cambodian Alliance of Trade Unions president Yang Sophorn, argued that the proposal was an “excuse” to avoid engaging in serious wage negotiations.

ASEAN and other countries reaffirm commitment to sign RCEP in 2020
(24 June 2020) ASEAN member countries and other stakeholders reiterated their commitment to sign the Regional Comprehensive Economic Partnership (RCEP) trade deal in 2020, despite the challenges from the COVID-19 pandemic. At the 10th Regional Inter-sessional Comprehensive Economic Partnership (RCEP) Ministerial Meeting held virtually on 23 June, ASEAN, Australia, China, Japan, South Korea and New Zealand said the deal’s importance has grown amid the pandemic. They also noted that “the RCEP remains open for India,” which had backed out of talks in November 2019, citing unresolved “significant issues.” Once it comes into effect, the RCEP is estimated to be the biggest trade pact in the world, as it will involve countries that collectively make up one-third of global gross domestic product.

ASEAN leaders to convene at 36th Summit online
(25 June 2020) ASEAN leaders will convene at the 36th ASEAN Summit today via teleconference to discuss on how to further enhance cooperation on public health emergencies and put in place a robust post-pandemic recovery plan. The summit was originally scheduled for 6-9 April, but was postponed to June due to the COVID-19 pandemic. As ASEAN Chair in 2020, Vietnam Prime Minister, Nguyen Xuan Phuc, will preside over the opening ceremony of the summit. During the summit, ASEAN leaders will evaluate ASEAN’s community-building efforts, the challenges ahead, and adopt a number of key documents to improve the lives of the peoples of ASEAN post-COVID-19. The summit is expected to reaffirm the need for a post-pandemic recovery plan which will involve collaboration among industries, the private sector and other stakeholders.