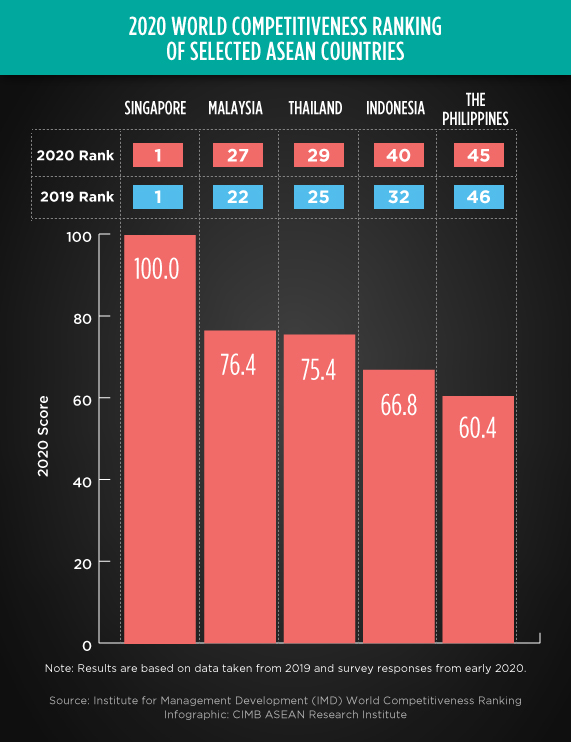 Global competitiveness ranking shows Singapore retaining the top spot
(16 June 2020) Singapore has retained the number one spot in the Institute for Management Development’s (IMD) 2020 World Competitiveness Ranking. The ranking covers 63 economies and results are determined using hard data and responses from business executives’ perception of their respective country’s economy. According to IMD, Singapore’s strong economic performance from robust international trade and investment, employment, and labour market measures played key roles in determining the country’s score. Other ASEAN countries, on the other hand, fell in their rankings. Indonesia dropped eight places to 40 while the Philippines dropped one spot to 46. Although Malaysia and Thailand saw a drop in rankings as well, they remain in the top 30. Rounding up the top five competitive markets after Singapore are Denmark, Switzerland, the Netherlands, and Hong Kong.

Malaysia’s economy expected to recover starting from end-2020
(17 June 2020) Indonesia is seeking to double down on peatland fire prevention and law enforcement following the massive fires that ravaged much of Indonesia’s forests in 2019. The country’s Meteorology, Climatology and Geophysics Agency (BMKG) estimates that the 2020 drought season will start in June and peak in August, warning that dry conditions will typically induce hot spots. As the country enters the dry season, the Environment and Forestry Ministry has been creating artificial rain to prevent peatland fires in several fire-prone areas, with the help of the Agency for the Assessment and Application of Technology (BPPT) and BMKG. Ministry data showed that 1.65 million ha of forest and land burned in 2019, second only to the 2.61 million ha that burned during the 2015 massive fires while the 2020 figure currently stands at 38,772ha.

All public transport and flights allowed to operate at full capacity
(18 June 2020) Indonesia’s central bank is expected to resume lowering interest rates after a two-month pause as the economy continues to slow down due to COVID-19. Out of 22 economists surveyed by Bloomberg, 15 of them believe that Bank Indonesia will cut its benchmark rate by 25 basis points on 18 June to 4.25%, adding to the 50 basis points of cuts made in the beginning of 2020. The country’s GDP is expected to contract 3.1% in the second quarter of 2020, while the government has lowered its growth projections for 2020 to between 0% and 1%. Meanwhile, Indonesia’s rupiah has gained more than 5% over the past month to be the best performer in Asia.

Myanmar lays out three-phase recovery plan to reinvigorate tourism industry
(18 June 2020) The central bank of Thailand will prototype a new payment system for businesses based on the digital currency system it is developing called Project Inthanon. First announced in 2018, the project is a collaboration between the Bank of Thailand and eight of Thailand’s financial institutions and is aimed at developing a wholescale central bank digital currency (CBDC). The goals of the new payment systems for businesses are to study the feasibility of the CBDC and develop a process of integrating it with Thailand’s business platforms. As part of the project, the CBDC prototype will be integrated with the procurement and financial management system of the Siam Cement Public Company, beginning in July and set to conclude by the end of 2020.

Thailand’s property market strengthening
(17 June 2020) Malaysia’s Islamic finance sector is projected to sustain double-digit growth to reach almost US$700 billion (RM3 trillion) in 2020 under the second Capital Market Masterplan, according to Bursa Malaysia chairman Abdul Wahid Omar. As of March 2020, Shariah funds valued at US$39.8 billion (RM170 billion) represented 23% of total industry asset under management (AUM) while Shariah unit trust fund’s net asset value (NAV) of US$23.1 billion (RM99 billion) represented about 23% of the overall industry NAV. “Continued promotion by the asset management industry can help contribute to a greater awareness of Shariah investing to a broader group of investors,” Wahid said during his keynote address at the Shariah Investing Virtual Conference 2020 on 17 June. Malaysia is the third-largest market for global Islamic finance products and the world’s largest sukuk issuer. In 2019, the country ranked first in terms of Islamic funds AUM with 34% of the global share.

Philippine-Japan trade fall by more than half in April 2020
(15 June 2020) South Korea plans to launch negotiations for a free trade agreement with Cambodia in July, top officials announced on 15 June. Trade between South Korea and Cambodia has been increasing in recent years. Exports from South Korea saw a 5.5% increase to US$6969 million in 2019, while its imports from Cambodia increased 6.8%. The main trading items between the two countries consist of textiles and apparel. According to Deputy Prime Minister and Finance Minister Hong Nam-ki, the proposal for an FTA with Cambodia was raised in March 2019 as part of South Korea’s New Southern Policy while a joint feasibility study and related public hearing were completed in late May and 12 June, respectively. In May 2020, the country’s exports slipped for a third consecutive month, showing a drop of 23.7%, weighed down by risks stemming from the COVID-19 pandemic.

Japan Credit Rating Agency upgrades Philippine credit rating to A-
(18 June 2020) The public bus industry in Singapore is looking to increase the hiring of local workers, with the aim of hiring 1,200 bus drivers in 2020. Some 300 Singaporeans have been recruited as bus drivers so far this year. The 10,000 bus drivers currently in the workforce are made up of a “healthy mix” of both local and foreign bus drivers. The industry is also looking to hire about 200 permanent residents. This would result in a 14% increase in the bus driver workforce. According to Minister for Transport Khaw Boon Wan, the COVID-19 pandemic reportedly provides a “golden opportunity” to increase hiring among Singaporeans whose jobs have been impacted by the COVID-19 pandemic. National Transport Workers’ Union executive secretary Melvin Yong said that between 2016 and 2019, more than 600 locals joined the public bus industry.

Pertamina signs deal with Taiwan’s CPC to develop petrochemical complex
(18 June 2020) Over the last week, Vietnam approved a US$9.3 billion tourist resort project in the coastal Can Gio district 50 km south of Ho Chi Minh City and slated for completion in 2031. It is Vietnam’s biggest commercial project so far in 2020, and is led by Vingroup, Vietnam’s largest conglomerate. Vietnam hopes to maintain a record pace of public and private investment since January 2020. The project had to wait years for government approval due to civil society groups and environmental activists warning of the environmental risks associated with it. The IMF has cut its economic growth projections for Vietnam to 2.7% in 2020, although Vietnam hopes to achieve an expansion of more than 5.0%.

Government unveils digital economy masterplan
(18 June 2020) Even as the country recorded no new confirmed COVID-19 cases for 67 consecutive days, the Lao government continues to implement preventive measures and monitor people entering the country to avoid a second wave of COVID-19 outbreak. Those entering Laos, especially returning workers, will be sent to quarantine centres for 14 days, while the temperature of each person entering Laos will be checked. On 17 June, a total of 1,930 people entered Laos through international border checkpoints and from this number, 1,348 people crossed the border with Thailand. A total of 49 people entered Laos from China, while 527 people entered Laos from Vietnam, according to the Lao Ministry of Health. Laos announced its first two COVID-19 confirmed cases on 24 March, and the last patient was discharged on 9 June.

Singapore facing its most severe economic recession due to COVID-19
(18 June 2020 Indonesia will receive US$4.2 million from Australia in support of its COVID-19 response and recovery. The money will go towards strengthening Indonesia’s laboratories, improving the way it collects and uses health information, and protecting patients and health workers. Australia’s ambassador to Indonesia stated that both countries are well-positioned to overcome these challenges together, and that Australia intends to support Indonesia’s immediate critical health security efforts in collaboration with the World Health Organization. Other parties have also pledged to aid Indonesia in its fight to contain the pandemic. Last week, the United Nations announced that it would contribute US$2 million to support Indonesia in its COVID-19 Multi-Partner Trust Fund while New Zealand announced in May that it would contribute US$3 million to Indonesia’s COVID-19 preparedness, response and recovery efforts through the UN’s Children’s Fund Indonesia.