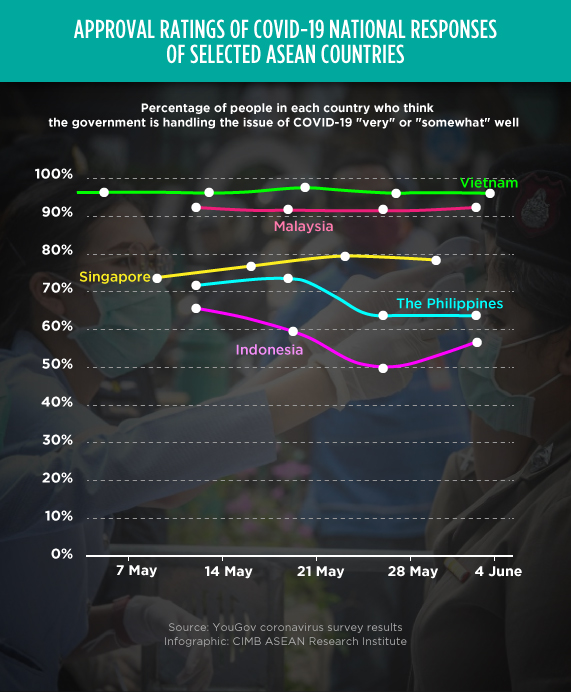 Vietnam and Malaysia’s COVID-19 response receive strong approval ratings
(8 June 2020) The approval ratings of government handling of COVID-19 around the world shows Vietnam and Malaysia taking the lead among the countries surveyed and among ASEAN countries. In the survey conducted by YouGov, the London-based think tank asked respondents on how well they thought their respective governments addressed the pandemic. As of 2 June, Vietnam led with an approval rating of 97%, followed by Malaysia with 93%. Indonesia’s rating improved from 50% on 25 May to 57% on 1 June following perceptions that things were improving. Singapore’s rating seems to be gradually improving while the Philippines saw its approval ratings plunge from 74% on 18 May to 64% on 25 May and 1 June. Outside the region, approval ratings in the US and UK continue to decline while France and Sweden saw a slight improvement in ratings.

Malaysia’s economy expected to recover starting from end-2020
(3 June 2020) Under the Free Trade Agreement (FTA) and the Investment Agreement (IA) between Hong Kong and ASEAN, the parts relating to Indonesia will enter into force on 4 July, the Hong Kong government announced on 3 June. Under the FTA, Indonesia will progressively reduce and eliminate customs duties on goods originating from Hong Kong while Hong Kong service providers will enjoy better business opportunities and legal certainty in market access for different services sectors in Indonesia. Once the agreements come into force for Indonesia, there will be a total of eight ASEAN member states for which both the FTA and the IA have taken effect. According to a Hong Kong government spokesman, the dates of entry into force for the remaining two ASEAN member states, Brunei and Cambodia, will be announced as soon as they are confirmed.

Myanmar lays out three-phase recovery plan to reinvigorate tourism industry
(11 June 2020) Myanmar’s Ministry of Hotels and Tourism has laid out a three-phase recovery plan to reinvigorate its tourism sector which has been impacted by COVID-19. The first “Survival” phase will focus on financial aid to hotels and tourism businesses as well as online training for tourism professionals and staff, discussing travel destinations and the tourism market. Phase two, named “Reopening,” will take place in June, July, and August and will focus on promoting domestic travel while businesses have to abide by standard operating procedures for the health and safety of staff and travellers. The third phase will focus on “Re-launching” and will be implemented within six months to a year. This phase will see the rolling out of new marketing campaigns and long-term plans to reinvent the country’s tourism. When the country reopens, the government plans to create “travel bubbles” through bilateral agreements with Thailand, Cambodia, Laos and Vietnam.

Thailand’s property market strengthening
(9 June 2020) Nationwide house prices in Thailand increased by 5.7% year-on-year in the first quarter of 2020 (Q1 2020), an improvement from 2019’s 2.2% increase and the largest increase since the first quarter of 2018. During the fourth quarter of 2019, house prices showed a quarterly increase of 3.1%. According to the Bank of Thailand, the total amount of property credit outstanding also showed an increase in Q1 2020; it went up by 5.0% year-on-year to US$ 99.33 billion (3.15 trillion baht). This was on the back of an annual rise of 5.2% in 2019. Similarly, residential construction activity in the kingdom appears to be rising as well. Nationwide condominium registrations jumped by 47.6% year-on-year to 22,202 units in Q1 2020. In Bangkok Metropolis, condominium registrations surged by 122.3% year-on-year to 15,395 units during the same period.

Philippine-Japan trade fall by more than half in April 2020
(10 June 2020) Trade between the Philippines and Japan have been adversely affected by the COVID-19 pandemic, with both exports and imports falling by more than half in April 2020 compared with the previous year. The value of exports from the Philippines to Japan dropped by 54.0% in April 2020, from US$789.4 million to US$363.4 million, year-on-year, according to data from the Philippine Statistics Authority. Imports from Japan in the same month decreased by 60.1% from US$897 million to US$357.5 million. In terms of exports to Japan, significant decreases were observed in industry-critical commodities such as wiring sets, iron and steel, metal components, and non-metallic mineral manufactures. Noticeable losses were also recorded for agricultural and fishery exports to Japan. The Manila branch of the Japan External Trade Organization (JETRO) cited the global supply chain disruption and world economic slowdown due to COVID-19 as the main reasons for the decline.

Japan Credit Rating Agency upgrades Philippine credit rating to A-
(11 June 2020) The Japan Credit Rating Agency (JRC) has upgraded the Philippines credit rating to A- from BBB+ with stable outlook. According to the JRC, a downturn would be limited given the country’s strengthened economic base, resilient external position, and government’s economic stimulus package totalling more than 9% of GDP. The JRC stated that while the Philippines’ fiscal deficit may widen, its fiscal soundness will not be impaired due to government debt remaining comparatively subdued. The upgrade by the JRC comes after Fitch Ratings lowered its outlook for the Philippines to stable from positive, but retained the country’s BBB rating.

Pertamina signs deal with Taiwan’s CPC to develop petrochemical complex
(10 June 2020) Indonesian state oil giant Pertamina has signed a deal with Taiwan’s CPC to jointly develop a US$8 billion petrochemical complex in West Java province. The plant will begin operations in 2026, and will be built at an existing refinery in the area. Both parties have been in talks since 2018 to develop the new plant, and both will contribute 45% of the plant’s costs, with the remainder to be financed by external investors. The plant will produce ethylene, commonly utilised in the manufacture of plastic. Pertamina plans to double its capacity to some 2 million barrels a day by 2026 through the expansion of half a dozen other oil refineries.

Government unveils digital economy masterplan
(5 June 2020) Brunei’s Digital Economy Council has launched its first five-year masterplan, the Digital Economy Masterplan 2025, on 4 June. The masterplan outlines strategies for the country to become a smart nation that has a digital and future-ready society, vibrant and sustainable economy as well as a conducive digital ecosystem. Four strategic thrusts were identified to support the mission and vision of the masterplan: industry digitalisation; government digitalisation; a thriving digital industry, and manpower and talent development. The plan listed 17 projects that are expected to be implemented in the next five years, covering areas that include the public transport information system, national business service platform, school network infrastructure and halal certification system.

Singapore facing its most severe economic recession due to COVID-19
(10 June 2020) Singapore is facing its most severe recession ever, due to supply and demand shocks caused by COVID-19, said Monetary Authority of Singapore (MAS) managing director Ravi Menon. The country’s GDP for 2020 is forecast to contract between 7% and 4%. MAS has eased the Singapore dollar’s rate of appreciation to 0%, starting at a lower prevailing level of the exchange rate in March 2020. The exchange rate is therefore at a lower level against a trade-weighted basket of currencies and has been kept stable, he said. However, MAS is concerned about renewed capital outflows from emerging market economies, as well as the increased deterioration of credit quality.