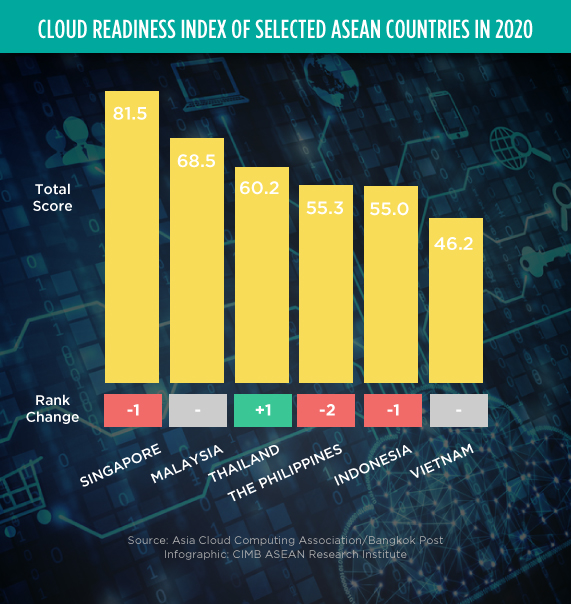 Singapore leads while Thailand improves ranking in Cloud Readiness Index
(1 June 2020) In terms of the preparedness of ASEAN countries in adopting cloud computing technologies, Singapore leads the region, followed by Malaysia, Thailand, the Philippines, Indonesia and Vietnam. Thailand was the only country in ASEAN to show an improvement in ranking while other countries’ ranking remained unchanged or decreased. The Cloud Readiness Index (CRI), developed by the Asia Cloud Computing Association (ACCA) measures Asia Pacific economies’ preparedness through ten quantitative parameters and qualitative review of regulations and policies. According to the ACCA, Singapore’s broadband quality and government regulatory environment remain its strongest parameters while Thailand’s rise is attributed to the country’s efforts to boost international connectivity, data centre risk protection and privacy safeguards. The association noted that the COVID-19 pandemic has increased the visibility and importance of internet and cloud computing tools which support the work from home ecosystem.

HK-ASEAN FTA to come into effect on 4 July for Indonesia
(3 June 2020) Under the Free Trade Agreement (FTA) and the Investment Agreement (IA) between Hong Kong and ASEAN, the parts relating to Indonesia will enter into force on 4 July, the Hong Kong government announced on 3 June. Under the FTA, Indonesia will progressively reduce and eliminate customs duties on goods originating from Hong Kong while Hong Kong service providers will enjoy better business opportunities and legal certainty in market access for different services sectors in Indonesia. Once the agreements come into force for Indonesia, there will be a total of eight ASEAN member states for which both the FTA and the IA have taken effect. According to a Hong Kong government spokesman, the dates of entry into force for the remaining two ASEAN member states, Brunei and Cambodia, will be announced as soon as they are confirmed.

Cambodia urged to increase rice exports to China as part of FTA negotiations
(5 June 2020) Cambodia was urged by the Cambodia Rice Federation to increase its rice exports to China, which is a key market for the country. The idea was mulled as part of inputs from the rice sector before the third round of negotiations for the Cambodia-China Free Trade Agreement scheduled to be held on 9 June 2020. Cambodia and China started their talks over a bilateral FTA since the beginning of 2020, with the first round of talks taking place in January and the second in April. Cambodia exported 356,097 tonnes of rice during the first five months of 2020, up 42% year-on-year. China is the main destination of the country’s rice export, representing 38% of the total export.

International tourist arrivals and inbound tourism receipts fall in January-May 2020
(3 June 2020) The number of international tourists fell 62.2% to 1.3 million from January to May 2020, with “zero arrivals” recorded in April and May while inbound tourism receipts slumped by 60.6% to US$1.6 billion (P81.05 billion), from the same period in 2019. This was disclosed by Tourism Secretary Bernadette Romulo Puyat on 2 June. Although many provinces and regions have been placed under the more relaxed modified general community quarantine status (MGCQ), they are still wary of accepting tourism business. Puyat said that the Department of Transportation will be talking to the Department of the Interior and Local Government and different local government units on when they will be ready to accept tourists. Major Philippine carriers have announced plans to fly to various cities in the first week of June, even as the Civil Aeronautics Board (CAB) reminded them that non-essential travel was still prohibited in general community quarantine (GCQ) areas.

Government passes record stimulus package to counter COVID-19 impact
(31 May 2020) The Thai government approved a US$59.7 billion (1.9 trillion baht) stimulus package on 31 March to resuscitate its economy which has been battered by the COVID-19 pandemic. Around US$17.3 billion from the package will be utilised as aid to farmers and informal workers such as street vendors and those employed in massage parlours and bars. The cash injection is also expected to provide for a fund to stabilise markets and boost purchasing power, while US$1.4 billion will be spent for “healthcare readiness”, according to the government which did not provide further details on how the money would be spent. Prime Minister Prayut Chan-o-Cha said there would be a “step-by-step screening” of how the stimulus package will be doled out. Thailand’s tourism-reliant economy has been severely affected by the halt in international travel, with more than 20 million people registering for a government cash handout of US$150 (5,000 baht).

Exports in April 2020 fell 23.8%, largest drop since 2009
(4 June 2020) Malaysia’s Department of Statistics revealed that the country’s exports in April 2020 had dropped by 23.8% year-on-year to US$15.2 billion (RM64.9 billion), its largest drop since September 2009, during the global financial crisis. The drop was largely attributed to the shutdown of most of Malaysia’s economy since the enforcement of the Movement Control Order on 18 March due to the COVID-19 pandemic. Imports also registered a decrease of 8.0% to US$16.0 billion (RM68.4 billion) year-on-year, but exceeded the value of exports leading to a trade deficit of US$820 million (RM3.5 billion). This has been Malaysia’s first trade deficit since October 1997. Malaysia’s total trade for the month stood at US$31.3 billion (RM133.3 billion), a decrease of 16.4% year-on-year.

Government delays roll out of 5G services after allocations to telcos nullified
(4 June 2020) Malaysia will delay the roll out of 5G services by 12 months after its initial allocations to five telco companies were nullified, according to a news report. The allocation deals, which were signed on 15 May, were reversed after public complaints of the secretive nature of the process. The Communications and Multimedia Ministry has pledged to ensure a transparent process but did not provide a timeline. The government also stated that it will look into how the available 700MHz, 900MHz and 2600MHz frequencies can be utilised. The previous government had stated in December 2019, that Malaysia would seek expertise from global telcos including Chinese and Japanese companies to roll out 5G services by the first half of 2020.

Indonesia’s rupiah and bonds return to pre-pandemic levels
(5 June 2020) Indonesia’s rupiah and bonds are back to pre-pandemic levels as the global economy emerges from lockdowns. The rupiah gained over 17% this quarter, erasing most of its losses in the first three months of this year, while 10-year bond yields are back to around 7%, around the level it started in 2020. The government saw a record amount of orders at a bond auction held on 4 June, while foreign funds are also starting to return. Overseas investors bought a net US$973.2 million worth of Indonesia’s bonds so far in the second quarter of 2020, after selling US$8.6 billion in the first three months of 2020. This rally in Indonesian assets comes amidst warnings of a widening fiscal deficit and slower-than-expected growth.

Brunei starts easing restrictions
(4 June 2020) Brunei is now in the first stage of its de-escalation plan to lift restrictions by a gradual reduction of social distancing measures. Health Minister Dr Awang Mohd Isham Jaafar has been encouraging members of the public and businesses to use the BruHealth app to scan QR codes when entering and exiting commercial premises. To date, 264,258 users and 4,876 companies and businesses have registered for BruHealth. Although the kingdom has seen no new cases of COVID-19 for about three weeks, it has been observing precautionary measures as the virus is still considered a threat. Safety measures and guidelines, regarded as the “new norm”, are being adapted and practised by the local community to combat the transmission of COVID-19, including social distancing, using hand sanitisers, wearing face masks and gloves, temperature checks and QR code scanning.