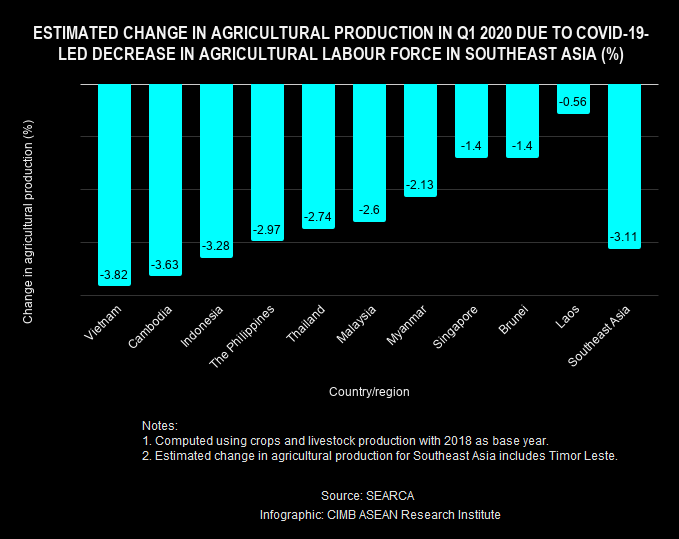 Southeast Asian Q1 2020 agricultural output down by 3.11% due to COVID-19
(22 May 2020) The economic fallout from the COVID-19 is projected to have cut agricultural production in Southeast Asia in the first quarter of 2020 by 3.11%, equivalent to 17.03 million metric tonnes of produce lost and affecting around 100 million farmers. According to a paper by the Southeast Asian Regional Center for Graduate Study and Research in Agriculture (SEARCA), the loss in agricultural output is expected to lead to a 1.4% contraction in the region’s GDP, estimated to be worth US$3.76 billion. The agricultural sector remains a major job-generating area in ASEAN with 31% of the combined population employed in the industry. The regional think tank added that it is crucial for policymakers in the region to strike a balance between trade and food security needs.

Government to allocate US$104 million for entrepreneurs’ business recovery plan
(27 May 2020) Malaysia’s Ministry of Entrepreneur Development and Cooperatives (MEDAC) will allocate US$104 million (RM452.8 million) to assist entrepreneurs affected by the COVID-19 pandemic under a business recovery plan which aims to support the stability of the country’s entrepreneurial ecosystem. The allocation is expected to reach more than 21,847 micro entrepreneurs, small and medium enterprises, social entrepreneurs, startups and cooperatives. The Entrepreneur and Cooperative Recovery Plan was tabled at a cabinet meeting on 6 May 2020. According to MEDAC minister Wan Junaidi Tuanku Jaafar, the plan consists of 30 programmes that will be implemented in two phases, namely the immediate measures from May to December 2020 and the medium-term from January 2021 to May 2021.

Singapore unveils US$23.2 billion Fortitude Budget
(26 May 2020) Singapore announced a new US$23.2 billion (S$33 billion) budget on 26 May, aimed at providing jobs and helping workers and businesses through the COVID-19 pandemic. According to Deputy Prime Minister Heng Swee Keat, the Fortitude Budget aims to help businesses and workers adapt, transform and seize new opportunities. The unveiling of the new budget comes as Singapore prepares to reopen its economy in three phases, following a “circuit breaker” period which took place for almost two months. Heng said as the country opens up, the government will continue to give more support to businesses which are not yet ready to reopen as well as workers still unable to resume work. He emphasised the need for the country to reopen safely and carefully. More details of the budget will be provided when parliament debates it at the next sitting on 4 and 5 June.

Government assessing 5% tariff hike expected to raise US$4.8 billion
(26 May 2020) The Philippine government is assessing the need to implement a 5% increase in tariffs on all products to raise US$4.8 billion (P245 billion) immediately for its efforts to fight COVID-19. Trade Undersecretary Ceferino S. Rodolfo explained that an across-the-board tariff increase is a reasonable option rather than targeting certain products, which could entail allegations of protectionism from trading partners. State officials are assessing how the hike would impact international agreements, and how the additional tariff on specific products, particularly essentials, would impact on inflation. Rodolfo said there should be little concern on the treaties, as the proposed action would affect all imports and not just specific goods. However, experts and business leaders fear that the cost of additional tariff would only be passed on by importers to consumers.

The Philippines to ease its lockdown starting 1 June as millions go unemployed
(29 May 2020) The Philippines will ease the country’s lockdown beginning 1 June, after two months of quarantine measures which saw an estimated 2.6 million people lose their jobs. President Rodrigo Duterte stated that Metro Manila will be downgraded from an “enhanced” quarantine to a “general community quarantine,” while the rest of the country will be under a “modified general community quarantine.” Public transport, railways, and domestic flights will also be resumed gradually. A survey conducted in early May found that 16.7% of residents experienced hunger at least once in the past three months. The decision to ease the lockdown comes amidst a daily record of 539 new cases recorded on 28 May.

Regions in Indonesia to lift partial lockdowns
(28 May 2020) Regions in Indonesia, including Jakarta, will begin lifting restrictions on movement and prepare to enforce social distancing and public health measures as the number of local cases drop. As of 27 May, Indonesia had reported more than 23,851 cases, the second-highest number in Southeast Asia after Singapore. Its death toll, at 1,473, is the highest in East Asia outside China. Among the regions where partial lockdowns will be removed include the provinces of Jakarta, West Java, West Sumatra and Gorontalo, and 25 cities and regencies outside these provinces. A total of 340,000 military and police personnel will be dispatched to these areas to enforce social distancing and public health measures. The Health Ministry has also issued a circular explaining health protocols that workplaces must adopt. Officials have noted that only regions with “good epidemiology indicators” will be allowed to loosen their restrictions.

Bali expected to reopen its tourism industry in July 2020
(28 May 2020) Indonesia’s national development planning minister Suharso Monoarfa stated that Bali is expected to reopen its tourism industry in July 2020, after businesses on the island were shut down for the last two months. The total number of COVID-19 cases in Bali remains at 420, with only four deaths. Bali’s relative success in handling the pandemic was attributed to a well-defined leadership structure which included community leaders. Plans for reopening the economy and entering a new normal phase will be implemented in stages. Measures will depend on criteria such as the basic reproduction number, which represents the number of new infections estimated to originate from a single case, falling below one, as well as the readiness of the healthcare system.

Government to borrow US$925 million from central bank to cover budget deficits
(28 May 2020) Myanmar’s Union Parliament approved a motion to borrow US$925 million from the Central Bank of Myanmar to cover budget deficits as government spending on economic and social recovery and healthcare is expected to increase due to COVID-19. The borrowing from the central bank is expected to cover 20% of the total deficit for the 2019/2020 fiscal year. Another 40% of the deficit will be funded from the sale of treasury bills and bonds. Myanmar has recorded budget deficits for the past five fiscal years but government borrowings from the central bank has been declining year-on-year due to income from the sale of bonds and treasury bills. During the 2015/2016 fiscal year, the government borrowed 84% of the budget deficit which then dropped to 27% during the 2018/2019 fiscal year.

Vietnam stock market emerges as Asia’s best performer in May 2020
(27 May 2020) Vietnam’s stock market was Asia’s best performer in May 2020, with its benchmark equity index having rallied 13% during the month. This was driven mainly by local investors, as foreign funds pulled out of risky assets. Vietnam’s currency also rebounded by more than 1% after having slid to a record low in March during a global sell-off. This performance was in part due to the country’s success in handling the COVID-19 outbreak, with the country expected to avoid a recession that will affect many of its Asian neighbours, according to the International Monetary Fund.

Wildlife trade ban appears to lose traction amid COVID-19 success
(25 May 2020) Conservationists concerned that Vietnam is no longer prioritising wildlife regulations sent a letter to Prime Minister Nguyen Xuan Phuc last week requesting an update on planned regulations to curtail the trade and consumption of wildlife. In March, Phuc requested that a draft legislation banning the trade and consumption of wildlife in Vietnam be prepared by 1 April. This was done in response to the COVID-19 pandemic which is believed to have spread when a virus jumped from a wild animal species to a human at a market in Wuhan, China. Thus far, no information has been made available with regards to the legislation. In Vietnam, the illegal wildlife trade is estimated to be worth at least US$1 billion. China is currently the only country to have implemented a large-scale ban on the wildlife trade in response to the pandemic, although loopholes still exist.