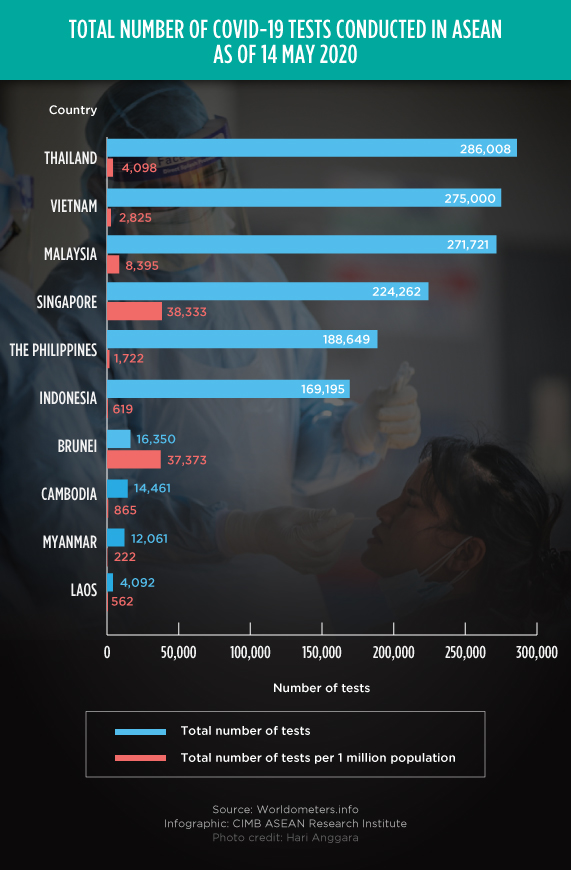 ASEAN calls for support for workers affected by COVID-19
(15 May 2020) ASEAN labour ministers have called for measures to ensure workers’ income, jobs and safety in order to support labourers amid the COVID-19 pandemic, at a special meeting held via videoconferencing on 14 May 2020. The Special Meeting of ASEAN Labour Ministers on Response to the Impact of COVID-19 on Labour and Employment was held to discuss the widespread and profound impacts of the pandemic on the health and livelihoods of people in ASEAN and around the world. The ministers adopted a joint declaration which stressed the need to implement joint efforts to promote labour and employment policies in response to the impacts of pandemics, economic crisis or natural disasters in the future. The meeting was also attended by ASEAN Secretary-General Lim Jock Hoi while International Labour Organisation (ILO) Director-General Guy Ryder shared his views and experiences from a global perspective, on the impact of COVID-19 to global employment, including future collaboration opportunities with ASEAN member states.

Thailand, Malaysia, Singapore may see recovery in first quarter of 2021
(12 May 2020) Export-oriented economies in South-east Asia are forecasted to take longer to recover from the COVID-19-led slowdown, compared with those with lower exposure to the impact of the global recession, according to a Morgan Stanley report released on 11 May. Economies like Thailand, Malaysia and Singapore are expected to recover in the first quarter of 2021. The lockdowns implemented by some of these countries have led to a double hit on exports and domestic demand. Countries like the Philippines and Indonesia are expected to recover earlier than the three economies even though the two countries’ institutional response to COVID-19 has trailed behind some of its peers. Their lower exposure to global recession impact and relatively high structural growth are why they are expected to return to pre-COVID-19 levels after China, which is expected to recover by the third quarter of 2020. Nevertheless, the report noted that if the drag from COVID-19 lingers, recovery could be hindered.

Malaysian economy beats expectations to grow by 0.7% in the first quarter of 2020
(14 May 2020) Malaysia has beat the expectations of economists and analysts to grow by 0.7% in the first quarter of 2020. This was against a -0.1% general projection and a -0.4% contraction projected by OCBC Bank. A contraction had been expected on the back of the COVID-19 pandemic, political instability, and low oil prices. Central bank governor Nor Shamsiah Mohd Yunus stated that the economy is expected to post a deep contraction in the second quarter, before recovering in the third. Malaysia is expected to benefit from a global economic recovery with its strong logistical players helping to boost online retailers. Inflationary pressures are expected to be muted this year due to low global oil and commodity prices.

Mitsubishi Motors reduces output in Thailand amidst COVID-19 pandemic
(14 May 2020) Mitsubishi Motors aims to reduce its workforce in Thailand as it reduces output in response to the COVID-19 pandemic. The company informed workers of the early retirement offer on 7 May, offering severance packages equivalent to eight to 35 months of wages, depending on the employee’s age and seniority. No numerical goals for job cuts have been set by the company yet. Mitsubishi makes a total of 400,000 cars a year in Thailand, and exports vehicles to over 100 nations. Sales in Thailand fell by 30% year-on-year in the first quarter of 2020, and plummeted by a further 50% in March. Production had been idled in April, and is expected to resume on 18 May.

Vietnam’s central bank further cuts policy rates to mitigate COVID-19 impact
(13 May 2020) The State Bank of Vietnam has reduced the refinancing rate from 5.0% to 4.5% and the discount rate cut from 3.5% to 3.0% on 13 May 2020. This is the second time in two months that Vietnam has cut its policy rates. The dong deposit rate cap for terms of one to six months has been reduced from 4.75% to 4.25%. The central bank said it was part of the government’s efforts to “help businesses overcome difficulties and ensure social security amid the COVID-19 pandemic.” The country’s garment, timber and seafood exporters have reported a decline in global demand in the last two months. Its aviation, travel and food industries have also struggled due to travel restrictions and social distancing measures.

Indonesia eyes US$1 billion rescue for Garuda
(11 May 2020) Indonesia is preparing a US$1 billion rescue plan for struggling national airline Garuda after the economic fallout from COVID-19 has forced the company to ground most of its planes, according to a business news report. Under the plan, around US$500 million in Garuda debt would be restructured with another US$500 million in new loans to help the airline meet operational needs for the next six months, said the report which cited Deputy State-Owned Enterprises Minister Kartika Wirjoatmodjo. The national airline was facing the prospect of defaulting on Islamic bonds known as sukuk, due in June. Investors would also be offered the option of extending maturities on their investment by three years or a staggered repayment scheme. State-controlled Garuda, which operates a fleet of more than 200 aircraft with its Citilink subsidiary, has temporarily cut employee salaries to help cope with an air travel slump sparked by the global pandemic.

Cambodia’s export of famous Kampot pepper affected by COVID-19
(12 May 2020) The exports of Cambodia’s renowned Kampot pepper, one of only two of the country’s products to be registered as a Geographical Indication in the European Union (EU), have been impacted by the COVID-19 pandemic, local media reported on 11 May. Currently, more than 130 tonnes of Kampot pepper remain in stock because it couldn’t be exported to markets like the EU and South Korea due to the pandemic. According to Chan Rith, director of Kampot provincial agriculture department, even though the exports of Kampot pepper are stuck, the price has not dropped. The harvest season runs from March to late June and the annual average yield is 2.5 tonnes per hectare. Ngoun Lay, president of the Kampot Pepper Promotion Association, said about 50% of the Kampot pepper is shipped to the EU, 20% to other markets, mainly to the US, Canada, Japan, South Korea, and Hong Kong, while the remaining 30% is consumed domestically.

Cambodian government working to improve country’s rice exports competitiveness
(14 May 2020) The Cambodian Ministry of Commerce and other relevant agencies reviewed a study on rice export costs in order to improve the competitiveness of the country’s rice exports. The ministry chaired the discussion alongside the Cambodia Agriculture Value Chain Programme (CAVAC) and Cambodia Rice Federation on 13 May. The study had been proposed by the Ministry of Commerce with technical and financial support from CAVAC. It looked at the value chain of the sector to target exports to European and other countries. Among the challenges to competitiveness included electricity prices and high transport costs. In the first four months of 2020, Cambodia exported 300,252 tonnes of rice to foreign markets, a year-on-year increase of 48%.

Brunei receives medical supplies from Chinese military
(15 May 2020) Brunei officially received medical supplies from the Chinese People’s Liberation Army, as both countries sought to enhance bilateral cooperation in battling COVID-19. The supplies were received on 14 May, and included medical masks, goggles, protective clothing, and waterproof isolation suits. After the outbreak of COVID-19 in Brunei, the Chinese central government, the Guangxi Zhuang Autonomous Region government and the Nanjing municipal government had also donated anti-COVID-19 medical supplies to the Brunei government. The Chinese embassy in Brunei had also contributed to the Brunei COVID-19 Relief Fund.