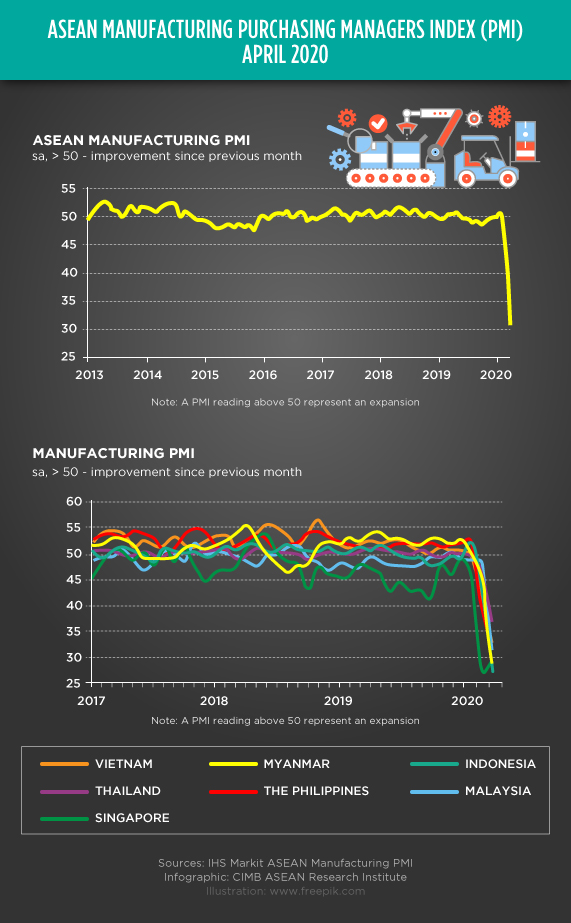 ASEAN manufacturing downturn intensified in April
(5 May 2020) Manufacturing activity in the ASEAN region deteriorated further to a record low in April due to disruption on the supply side while demand dried up during the COVID-19 pandemic, according to the latest IHS Markit statement. The ASEAN Purchasing Managers’ Index (PMI) fell to “an all-time low” of 30.7 in April, further worsening from a 43.4 reading in March, which represents “by far the largest monthly deterioration in manufacturing conditions since the series began in July 2012.” PMIs are reported on a hundred-point scale, with readings above 50 signifying an expansion in purchasing activity. All seven ASEAN countries surveyed posted declines in April, with the Philippines third with a record-low PMI reading of 31.6, behind Vietnam’s 32.7 and Thailand’s 36.8. Indonesia was the weakest of the countries surveyed at 27.5, plunging from 45.3 in March. Myanmar was at 29 in April from 45.3 in March, while Malaysia settled at 31.3 from 48.4 in March. Singapore recovered to 29.3 from the record low of 18.1 in March.

ASEAN working to restructure supply chains, according to Vietnamese minister
(7 May 2020) With the COVID-19 pandemic having had a negative impact on regional and global economies, ASEAN countries are making greater efforts to recover and improve their responsiveness to future risks, Vietnam’s Minister of Industry and Trade Tran Tuan Anh said. He told a local news agency on 6 May that Vietnam, as ASEAN chair, has proactively made adjustments in response to the outbreak. All recent ASEAN meetings devised initiatives and statements aimed at effectively and collectively responding to the pandemic. On 6 May, Anh had a phone discussion with ASEAN Secretary-General Lim Jock Hoi to look into economic recovery and supply chain maintenance. Apart from joint initiatives between ASEAN and its partners, the two sides also discussed common efforts by the ASEAN Chair and the ASEAN Secretariat on action plans and the integration of joint initiatives with various channels and sectors so as to effectively revitalise the economies of ASEAN and the world.

ASEAN countries expected to suffer significant drop in global remittances
(1 May 2020) ASEAN countries heavily dependent on global remittance flows such as the Philippines, Indonesia and Vietnam, are expected to suffer from a significant drop in remittance flows due to the COVID-19 pandemic. The World Bank recently stated in a report that global remittances are expected to drop by the widest margin in history in 2020, as wage workers suffer from wage cuts and job losses around the world. Remittance flows to the East Asia and Pacific region is estimated to fall by 13% in 2020, from US$147 billion in 2019. The Philippines accounts for nearly half of 2019’s remittances to five major countries in ASEAN, receiving US$35.1 billion in 2019 alone. Vietnam is the second-largest recipient, with remittances accounting for 6.5% of its GDP. Indonesia, on the other hand, could suffer from a huge drop in remittances from the Middle East, with the Gulf Cooperation Council states accounting for 43% of its total.

Indonesian-Australian free trade agreement to take effect on 5 July 2020
(7 May 2020) A free trade agreement between Australia and Indonesia is set to come into effect on 5 July 2020, providing a welcome boost for exporters amidst the COVID-19 pandemic. The agreement was approved by Canberra in December 2019, while Indonesian MPs signed it into law in February 2020. The Australian agricultural sector is expected to benefit from improved access to the Indonesian market, including red meat producers, grain growers, and dairy producers. Service providers in vocational education, healthcare, telecommunications, energy, and construction are also expected to benefit. Australian Trade Minister, Simon Birmingham, stated that the agreement provides an opportunity to stimulate growth and investment between both nations during the recovery phase.

COVID-19 sees the Philippines’ economy contract by 0.2% in first quarter of 2020
(7 May 2020) The Philippines’ economy contracted by 0.2% in the first quarter of 2020 (Q1 2020) due to the lockdown imposed on the main island of Luzon. This is the country’s first contraction since the fourth quarter of 1998. Philippine officials stated that the economy could contract in the next two quarters. Before the pandemic, economists predicted a 3.1% growth in Q1 2020. Household consumption in Q1 2020 grew by only 0.2% due to restrictions imposed to control the spread of the pandemic. The government is weighing whether to ease the lockdown by 15 May 2020. A senior economist at ING Bank stated that the Philippines economy is on course for a technical recession in 2020.

Malaysia’s trade surplus in first quarter of 2020 rises
(4 May 2020) Malaysia recorded a trade surplus of US$8.6 billion in the first quarter of 2020 (Q1 2020), marking a 0.1% increase compared to the same period in 2019, the highest trade surplus recorded for the first quarter since 2011, according to the International Trade and Industry Ministry (MITI). Total trade contracted 8.1% compared to the previous quarter. Exports and imports contracted 7.4% and 8.9% respectively while the quarterly trade surplus expanded 1.5%. Total trade during Q1 2020 grew 1.2% year-on-year to US$102 billion. The country recorded higher trade with Indonesia, the US, South Korea, Saudi Arabia and Singapore while recording lower trade with Thailand, Hong Kong, Vietnam, Germany and Singapore. According to MITI, trade with ASEAN in March 2020 contracted 5.0% year-on-year to US$9.2 billion, accounting for 26.4% share of Malaysia’s total trade.

Central bank cuts overnight policy rates by 50 basis points
(5 May 2020) Malaysia’s central bank, Bank Negara Malaysia (BNM) has cut its overnight policy rate (OPR) by 50 basis points (bps) to 2.00%, a level last seen during the 2008-09 global financial crisis. The ceiling and floor rates for the OPR have been reduced to 2.25% and 1.75%, respectively, BNM said in a statement issued on 5 May. With this latest cut, the OPR has been reduced by a total of 100bps since the start of 2020; the central bank had cut the OPR by 25bps to 2.75% in January, before making another 25bps cut in March to 2.50%. The last time it made a 50bps rate cut to 2.00% was on 24 February 2009. BNM noted that global economic conditions have weakened significantly, with measures to contain COVID-19 causing economic disruption worldwide. The latest cut by BNM matches expectations by economists surveyed by Bloomberg. In the survey, 14 out of 20 economists believed the central bank would lower the OPR to 2.00%.

Myanmar negotiates for funds to rescue economy
(7 May 2020) Myanmar is currently negotiating for foreign aid and assistance from the World Bank, Asian Development Bank and International Monetary Fund to help it implement a stimulus plan aimed at providing relief to businesses and industries affected by COVID-19, according to deputy minister of Planning, Finance and Industry, U Maung Maung Win. The country’s COVID-19 Economic Relief Plan (CERP), released in April, provides relief to the private sector through low-interest loans of up to US$360 million and credit guarantee schemes. According to deputy minister of Planning, Finance and Industry, U Set Aung, the government has received confirmation from its development partners to support hundreds of millions of dollars in development assistance needed to implement the CERP. So far, the World Bank has approved a US$50 million financing scheme for the Myanmar COVID-19 Emergency Response Project. The country is also considering IMF financing options, U Kyaw Kyaw Maung, governor of the Central Bank of Myanmar, said during a teleconference with members of ASEAN on 24 April.

Singapore looks to ramping up manufacturing activities
(3 May 2020) Singapore is looking to progressively ramp up its manufacturing activities, with the city-state looking to restart its economy as COVID-19 curbs start to ease over the next few weeks, its minister of trade and industry, Chan Chun Sing, told reporters on 3 May. Around 17% of Singapore’s labour force is currently working onsite to maintain essential services and support for global production chains and connectivity. Chan said sectors that are intertwined with the global supply chain such as biopharmaceutical and petrochemicals, as well as precision manufacturing, will be among the priority sectors. According to him, workplaces will have to put in place prescribed measures to minimise the risk of infection before they can reopen, adding that those who are able to work from home will have to continue to do so for the foreseeable future. The government announced on 2 May that it would start allowing some businesses to reopen from 12 May onwards.

Encouraging response to e-commerce platforms
(6 May 2020) The Authority for Info-communications Technology Industry of Brunei Darussalam’s (AITI) e-commerce platform has received favourable responses from the public since its introduction in April 2020. There are currently 14 e-commerce platforms registered under AITI, which sell products including food and beverages, and clothing. A similar initiative under Bank Islam Brunei Darussalam, called Community for Ramadhan has 120 participating vendors and 300 more on the waiting list. The e-commerce platforms were well-received by the public, said Minister at the Prime Minister’s Office and Minister of Finance and Economy II Mohd Amin Liew Abdullah during a press conference on 5 May. He added that there were already 14,000 visitors to eKadaiBrunei, an online portal that offers a list of products and services. He believes that e-commerce as a platform for vendors to sell products allows companies to create jobs and thus, helps the economy.