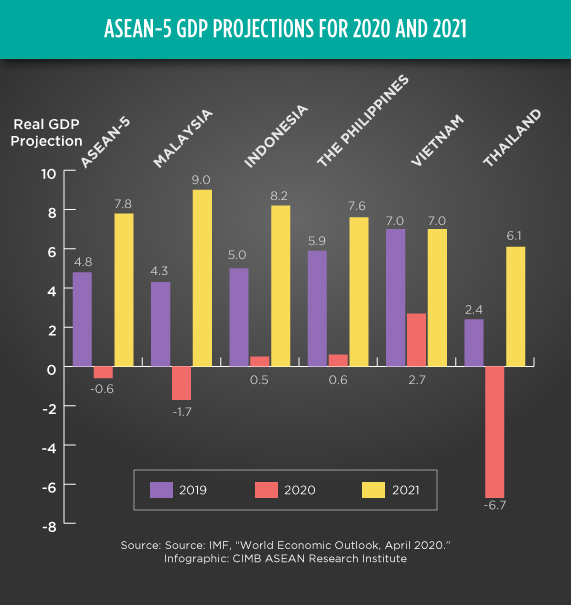 ASEAN-5 countries projected to grow in 2021
(15 April 2020) The International Monetary Fund (IMF) has projected strong growth for the ASEAN-5 countries, which are expected to achieve a combined GDP growth of 7.8% in 2021. Malaysia is expected to be the fastest-growing among the ASEAN-5 countries, with a projected growth rate of 9.0% for 2021. The other ASEAN-5 countries are projected to capture robust growth rates as well: Indonesia (8.2%), the Philippines (7.6%), Vietnam (7.0%) and Thailand (6.1%). The latest 2021 IMF projection for Malaysia is higher than Fitch Ratings’ projection of 5.8%. The IMF’s latest forecast expects global growth to contract by -3.0% before rebounding to 5.8% in 2021. However, the international financial institution noted that the rebound in 2021 depends critically on the pandemic fading in the second half of 2020, allowing containment efforts to be gradually scaled back and restoring consumer and investor confidence.

ASEAN rallies against COVID-19
(14 April 2020) The leaders of ASEAN met at the Special ASEAN Summit on COVID-19 via a videoconference chaired by Vietnamese Prime Minister Nguyen Xuan Phuc on 14 April 2020. They resolved to further strengthen health cooperation measures to contain the COVID-19 pandemic and protect the people and to intensify cooperation for adequate provision of medicines, essential medical supplies, and equipment, including diagnostic tools, and personal protective equipment. At the meeting, Thai Prime Minister Prayut Chan-o-cha proposed repurposing funds to support efforts to deal with the pandemic. According to a local Indonesian news outlet, part of the existing ASEAN Development Fund will be allocated to set up the new fund. Malaysia also proposed that ASEAN formulate an economic recovery plan post-COVID-19 that focuses not only on the financial aspects but also on social safety net, food security and education.

ASEAN now China’s largest trading partner
(15 April 2020) The ASEAN bloc has replaced the European Union to become China’s largest trading partner in the first quarter of 2020, according to data from the Chinese General Administration of Customs cited by a Chinese online news portal. In the first three months of 2020, total bilateral trade between ASEAN and China rose 6.1% year-on-year to US$140.62 billion despite the COVID-19 outbreak. However, the online news portal pointed out that manufacturing activities in some ASEAN countries were hit hard by the pandemic in March. ASEAN’s purchasing managers’ index (PMI) fell from 50.2 in February to 43.3 in March. The news outlet further stated that China can help the ASEAN supply chain recover.

Philippine central bank cuts interest rate by 50 basis points in off cycle move
(16 April 2020) The Philippines’ central bank, Bangko Sentral ng Pilipinas, has cut its key interest rate by 50 basis points in an off-cycle monetary easing move amidst fears of a possible recession in 2020. This will bring the benchmark interest rate to 2.75%, with the country having made 125 basis points worth of cuts this year. The move comes ahead of a scheduled monetary policy announcement on 21 May, and follows a 50 basis point reduction on 19 March. The central bank stated the cut was to encourage lending to various sectors amidst the COVID-19 pandemic. Finance Secretary Carlos Dominguez has said that the Philippine economy could contract by 0.8% or post zero growth in 2020.

Thai central bank to temper borrowing costs amidst massive borrowing by government
(17 April 2020) The Bank of Thailand could adopt unconventional methods to temper bond yields amidst a US$30.6 billion borrowing programme by the government. It is believed that the central bank had studied options such as large scale asset purchase programmes and some forms of yield-curve control. The additional borrowing by the government is more than double the average annual budget deficit of recent years, with concerns over how this will affect liquidity. Thailand has Southeast Asia’s largest local-currency bond market worth US$446 billion at the end of 2019. Its economy is expected to contract by 6.7% in 2020, according to IMF estimates.

Indonesia records US$743.4 million trade balance surplus in March 2020
(15 April 2020) Indonesia’s trade balance in March 2020 recorded a surplus of US$743.4 million, with exports valued at US$14.09 billion and imports at US$13.35 billion, according to the Central Statistics Agency (BPS). In March, the non-oil and gas trade surplus stood at US$1.7 billion, while the oil and gas sector posted a deficit of US$932 million. Therefore, the trade balance during the January-March 2020 period registered a surplus of US$2.62 billion, with an export value of US$41.79 billion and imports, US$39.17 billion. According to BPS Chief Suhariyanto, the trade surplus from January to March 2020 was a big improvement as compared to the same period in 2019 when a deficit of $62.8 million was recorded.

Singapore, NZ to keep trade lines in essential goods open
(15 April 2020) The trade ministers of Singapore and New Zealand have concluded negotiations to keep trade lines in essential goods open during the COVID-19 outbreak. A declaration on trade in essential goods for the fight against the COVID-19 pandemic was made in a joint statement announced on 15 April. This follows a joint ministerial statement on supply chain connectivity issued by the two countries in March 2020. Under the joint declaration, there will be no tariffs and other trade barriers, including export restrictions. Singapore is expected to receive its first shipment of essential supplies from New Zealand next week. The two countries will also work closely to expedite and facilitate the flow and transit of essential supplies through their respective sea and air ports.

Cambodia drops by eight spots in latest Index of Economic Freedom
(17 April 2020) Cambodia’s ranking in the latest Index of Economic Freedom dropped by eight places from 2019. The drop is largely due to lesser investment freedoms, with the country dropping by 10 points in that category from a year earlier. In 2020, Cambodia scored 57.3 points, putting it at the 113th position among 180 countries while the country held the 105th spot in 2019 after posting a score of 56.8 points. The study noted that while economic freedom in Cambodia has been in decline since 2017, its economic growth has been strong with an average of 7.1% over the past five years. The study opined that Cambodia will need to implement deep, broad, and well-institutionalised reforms. The Index of Economic Freedom is co-produced by the Heritage Foundation and the Wall Street Journal.