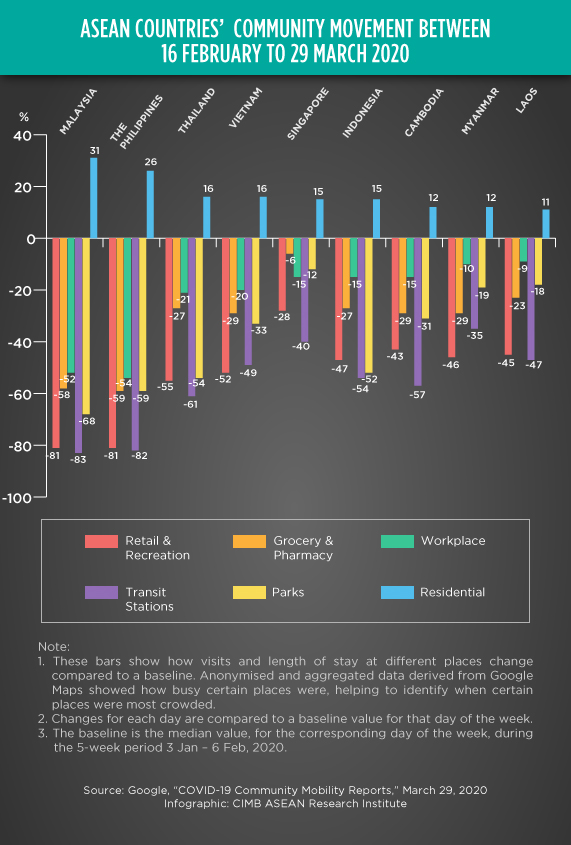 Report shows decline in mobility during COVID-19 pandemic
(29 March 2020) Movement trends of people around the world was recently revealed in Google’s COVID-19 Community Mobility Reports. The reports compare movement trends over time by geography, across six different categories of places. Among ASEAN countries, the trend in all the categories except residential showed a decline when compared to the baseline. Countries with partial lockdowns in place such as Malaysia and the Philippines showed significant drop in all categories except for residential. For instance, in the retail & recreation category, both saw a decline of 81% while visits to transit stations showed a sharp decline at 83% for Malaysia and 82% for the Philippines. The two countries also showed sharp reductions in movements to the workplaces, with both seeing a more than 50% decrease. The movement to residential places showed an upward trend for all ASEAN countries, with the highest increase of 31% evident in Malaysia, followed by 26% in the Philippines. The analysis of location data from billions of Google users’ phones were revealed to help health authorities assess if people are abiding with movement control orders and similar orders issued across the world to rein in the virus.

Trade deficit narrows as virus fears keep factories shut
(8 April 2020) A sharp decline in imports narrowed the Philippines’ trade gap in February 2020, the government reported on 8 April, an indication that COVID-19 fears are already crippling the country’s growth engines amid falling demand and tepid economic activity. According to the Philippine Statistics Authority, the country posted a trade deficit of US$1.66 billion in February, which was 39.4% smaller than the US$2.73 billion trade deficit recorded a year ago. A closer look revealed that imports fell 11.6% year-on-year in February to US$7.06 billion due to lower purchases of capital goods (-16.18%), raw materials (-8.65%), consumer goods (-9.45%) and mineral fuels (-12.03%), including petroleum crude. Shipments from major trading partner China fell 43.83%. On the flip side, exports posted an annual growth rate of 2.8% to US$5.4 billion. A prominent economist said the country’s shrinking trade deficit will likely persist in the coming months as businesses and factories remain shut in the main island of Luzon.

COVID-19 cases cross the 4,000 mark, new sub-cluster detected in Negeri Sembilan
(8 April 2020) Malaysia reported another 156 COVID-19 cases on 8 April, pushing the total number of cases past 4,000 and the number of deaths to 65. The total number of cases had already gone past 3,000 on 2 April. With 4,119 infections as of 8 April, Malaysia remains the worst-hit country in Southeast Asia. According to Health Ministry director-general Noor Hisham Abdullah, 166 more patients have recovered, which brings the total number of patients discharged as of 8 April to 1,487. He also revealed a new COVID-19 sub-cluster was discovered in Rembau, in the state of Negeri Sembilan, and it was linked to the Sri Petaling event. One of the participants of the Sri Petaling event had later attended a school meeting in Rembau. Twenty-seven people have now tested positive for the novel coronavirus, with two undergoing intensive care. Malaysia is currently under the Movement Control Order until 14 April, whereby people are required to stay at home and only essential services are allowed to operate.

Economy projected to grow by 5.8% in 2021
(9 April 2020) Fitch Ratings has affirmed Malaysia’s long-term foreign-currency Issuer Default Rating (IDR) at “A-”, with a revised outlook from stable to negative. It also projected Malaysia’s economy to grow by 5.8% in 2021. Malaysia’s government had recently launched a US$60.4 billion economic stimulus package, which is expected to add 2.9% points to its 2021 GDP growth. Malaysia’s Finance Minister Tengku Datuk Seri Zafrul Aziz stated that Malaysia had entered the pandemic “from a position of strength,” which included a healthy financial system, strong domestic institutional investors, adequate buffers, and robust policy frameworks. The government’s medium-term fiscal strategy will be issued together with the 2021 Budget in October 2020. He also noted that 96% of the government’s debt is issued in ringgit, and therefore not subject to currency fluctuations.

Malaysia and UK discuss COVID-19 and cooperation in trade and investment
(9 April 2020) Malaysia and the UK discussed matters concerning COVID-19 and the need for broader bilateral cooperation. The British High Commissioner to Malaysia, Charles Hay, stated that the High Commission had been helping British nationals return to the UK, and also raised the issue of British nationals with work permits or long-term visit passes who are stuck outside Malaysia during the latter’s Movement Control Order (MCO). There are approximately 8,000-10,000 British nationals residing in Malaysia, including work permit holders and those who live in the country under the Malaysia My Second Home programme. The High Commissioner also expressed concern over foreign companies and manufacturers operating under limited time or workforce caps, due to the impact it may have on their orders (especially for essential medical equipment). Britain is also setting up a Joint Committee on Trade and Investment Cooperation with Malaysia, and hopes to pursue a Dialogue Partner status with ASEAN.

Thousands of workers across Indonesia laid-off due to COVID-19 outbreak
(8 April 2020) Tens of thousands of workers across Indonesia have lost their jobs due to the economic impact brought upon by the COVID-19 pandemic. In Central Java, 24,249 workers have been laid off with 191 companies employing 148,791 workers affected by the outbreak. In West Java, its Manpower and Transmigration Agency recorded that 34,365 workers have been put on leave, 14,053 have been furloughed, while 5,047 have been laid off. In North Sulawesi, the Transmigration and Manpower Agency recorded 1,275 workers in the province that have been laid off, while 2,576 have been furloughed. A total of 262 companies across the region report that they have closed down because of the outbreak. According to Central Java Governor Ganjar Pranowo, the government will seek solutions for workers who have been laid off, one of which is the pre-employment card. “We have been allocated 421,705 slots for the pre-employment cards. So far, only 19,000 people have registered, less than 5% of the allocated slots,” he said.

COVID-19 adds new worry for Indonesia’s debt-saddled state-owned enterprises
(9 April 2020) The COVID-19 pandemic has added a new worry for Indonesia’s debt-saddled state-owned enterprises (SOEs), with a slump in revenue and credit crunches caused by the surge of the dollar pushing some closer to the risk of default. As of the third quarter of 2019, state-owned firms had amassed a combined debt of US$98 billion (a growth of 15% from the previous year). Many of Indonesia’s SOE’s have binged on debt for years, and many face debt-repayment issues amidst accusations of corruption and mismanagement. SOEs have also been racking up foreign debt as well, which has boosted their funding costs with the dollar surging now. Indonesia’s new SOE minister Erick Thohir has pledged to liquidate firms which fail to contribute to the country’s economic performance.

Myanmar attracts over US$2 billion in foreign investment in first half of FY 2019/2020
(9 April 2020) Myanmar had attracted some US$2.73 billion from permitted foreign companies in the first half of the FY 2019/2020, which started from 1 October 2019 till 31 March 2020. Within this period, the Myanmar Investment Commission (MIC) gave the go-ahead to 147 foreign investment enterprises. The power sector attracted the most investment with over US$1 billion, followed by the real estate and manufacturing sectors. From FY 1988/1989 to FY 2019/2020, a total of 1,984 foreign enterprises invested capital worth over US$84.5 billion. Singapore, China, and Thailand are the top three investors into Myanmar. The Yangon region attracts some 60% of investments from both home and abroad, followed by the Mandalay region at 30%.

Singapore enters month-long lockdown
(7 April 2020) Singapore’s usually bustling business district was almost deserted on 7 April as most workplaces were closed to stem the spread of the COVID-19 coronavirus after a surge in cases. The city-state has won praise for using a tough regime of testing and tracing contacts of the sick to keep its outbreak largely in check, but has seen a jump in new infections in recent days. While authorities previously resisted the kind of drastic measures seen in worse-hit countries, Manpower Minister Josephine Teo announced on 3 April that all workplaces except for those providing essential services and those able to operate remotely were to be suspended from 7 April to 4 May during a month-long “circuit breaker” campaign. Prime Minister Lee Hsien Loong urged Singaporeans to do their part to support healthcare professionals by staying at home and complying with the enhanced measures put in place. The city-state reported 66 more COVID-19 cases on 6 April, bringing its total so far to 1,375, including six deaths.

Government issues order banning majority of travel within the country for a week
(9 April 2020) The Cambodian government issued an order banning most internal travel for a week in order to contain the spread of COVID-19. The ban came into effect on 10 April, and will last until 16 April. The order, signed by Prime Minister Hun Sen, comes ahead of Cambodia’s new year holiday, a time when many people visit their families in the countryside. While people will be allowed to travel within the capital of Phnom Penh, travel into and out of the city will be barred. Residents will also be prevented from travelling between districts and provincial borders. Those exempted from the order include those transporting food, government officials, military officials, emergency service workers, and those who work in waste disposal. The travel lockdown comes amidst an emergency law likely to be approved by parliament in the coming days.