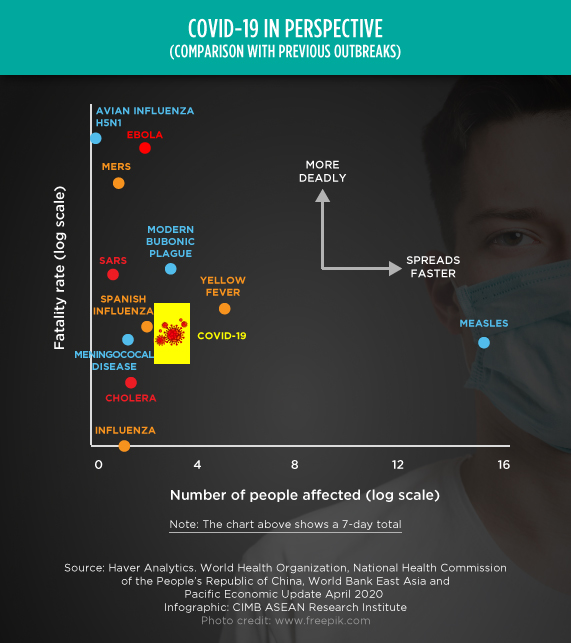 Central banks in Southeast Asia discuss coordinating efforts to mitigate COVID-19 impact
(31 March 2020) Officials from leading central banks in Southeast Asia have reportedly agreed to coordinate efforts to boost their economies, which are currently affected by the COVID-19 pandemic. According to Bank Indonesia Governor Perry Warjiyo who had a meeting with officials from five central banks in the region, the measures they are planning were still in discussion, but shows a coordinated direction in the region. Policymakers in the region have been cutting interest rates, boosting market liquidity and injecting stimulus into their economies as the spread of COVID-19 halts most economic activities. In the past week officials in Singapore and Thailand have said they expect their economies to shrink in 2020, while the World Bank warned Malaysia could be next.

Malaysia least impacted as ASEAN manufacturers report their worst month on record
(1 April 2020) Malaysian manufacturers appeared to be the least impacted in March 2020, according to the latest IHS Markit Purchasing Managers’ Index (PMI) data. The headline PMI fell from 50.2 in February to 43.4 in March, signalling a renewed deterioration in the health of the ASEAN manufacturing sector. A reading above 50 indicates an overall increase compared to the previous month while a reading below 50 shows an overall decrease. Malaysia’s Manufacturing PMI fell to 48.4 in March, from 48.5 in February. Singapore’s headline figure slipped a record 18.1 points from February to 27.7 in March, its lowest in almost eight years. The Philippines’ headline index fell to 39.7 which was the first time it reached below 50 since January 2016. Vietnam recorded a back-to-back contraction, its headline index fell to its lowest on record, 41.9 in March. It was similar with Myanmar, which saw its deterioration for the second month running, at 45.3. Indonesia, which showed expansion in February, returned to contractionary territory to 45.3 while Thailand posted a record low to 46.7.

Moody’s downgrades Malaysia’s banking system outlook to negative
(2 April 2020) Moody’s Investor Service downgraded Malaysia’s banking system from stable to negative, reflecting growing risk from the COVID-19 outbreak. The rating agency noted that deteriorating economic conditions over the next 12-18 months will see asset risks for banks increase while their profitability will concurrently decrease. It stated however that “robust loan-loss reserves and capitalisation will provide a buffer against growing risks.” Although the banks’ internal capital generation would decrease due to weakening profitability, weaker loan growth will see an overall stable loan-to-deposits ratio. Moody’s further noted that Malaysia is facing slower regional growth, while its lockdown will affect the country’s electronics exports and tourism sector. In addition, political uncertainty is expected to affect investor sentiment. Apart from Malaysia, Moody’s outlooks for the Australian, Chinese, Indian, Indonesian, Korean, New Zealand, Philippines, Singapore, Taiwan, Thailand and Vietnam banking systems were changed to negative.

World Bank cuts Myanmar’s GDP growth to 2%-3% for 2019/2020 fiscal year
(1 April 2020) The World Bank downgraded its projections for Myanmar’s GDP growth for the 2019/2020 fiscal year from 6.3% to between 2.0% and 3.0%, anticipating that the country will still have higher growth rates than other developing countries. The international financial institution attributed this to Myanmar’s strong performance in the first half of the fiscal year (1 October to 31 March). Myanmar’s economy is already suffering from the COVID-19 pandemic, with tourism, the garment sector, and agriculture all having been hit. The World Bank’s chief economist in Myanmar urged policymakers to invest more into the healthcare sector, provide income support for households, and defer tax payments and ease of credit for businesses. Myanmar’s economic growth is expected to return to between 4.0% and 6.0% during the period 2020-2021, but faces downside risks depending on how long the pandemic lasts.

Japan’s largest retailer Aeon plans to open mall in Yangon as early as 2023
(24 March 2020) Myanmar has announced a stimulus package to mitigate the impact of the COVID-19 outbreak. The stimulus package includes US$70 million worth of loans and relaxation of tax payments and deadlines for affected businesses such as garment, manufacturing, hotel and tourism businesses, as well as SMEs. The interest rate for loans to be given to vulnerable businesses will be set at 1.0% for a year, with the rate to be reviewed later as the government assesses the economic impact of the pandemic. Eligible businesses have now until the end of September 2020 to make their quarterly income tax and monthly commercial tax payments. Businesses will also be exempted from paying 2.0% advance income tax on exports until the end of the current fiscal year on 30 September. The stimulus package is expected to draw US$35.8 million from the country’s revolving fund and another US$35.8 million from the social welfare fund.

Government plans to cut corporate income tax and collect taxes from tech companies
(2 April 2020) The Indonesian government is planning a series of tax reforms, including cutting corporate income tax and taxing tech companies with an electronic transaction tax, in response to the COVID-19 pandemic. The decision to tax digital companies with the electronic transaction tax was made due to the companies’ increased sales during the COVID-19 outbreak, Finance Minister Sri Mulyani Indrawati said in a teleconference briefing on 1 April. Corporate income tax will be reduced from 25% to 22% for 2020 and 2021 and will be further reduced to 20% in 2022. The government also plans to spend a total of US$24.6 billion in health care, a social welfare safety net, and financial stimulus measures for small-and-medium enterprises. The government expects a 5.07% budget deficit in relation to its GDP. The government predicts economic growth to reach 2.3% in 2020, its lowest growth in 21 years, and is preparing for a worst-case scenario in which the economy contracts by 0.4% if the pandemic is prolonged.

Manila Port faces shutdown in a week as containers pile up due to lockdown measures
(1 April 2020) The Manila International Container Port, the 28th busiest container port in the world, could face shutdown in less than a week if not enough shipping containers are moved to free up space for new cargo. Businesses are facing hindrances in retrieving their cargo due to the lockdown in effect, with shut banks preventing importers from paying shipping fees as well as keeping warehouses and trucking services staffed. According to the Philippine Ports Authority General Manager Jay Santiago, while businesses usually retrieve around 4,000 containers a day from Manila Port, that has now slowed down to 1,600. The port is now operating at 98% capacity. Under draft rules expected to be released this week, cargo discharged from vessels for more than a month will be declared abandoned if not retrieved in five days, while cargo discharged in less than a month will be given ten days. The government may also cut down free storage space from seven days to five days.

Thailand begins night curfew to curb spread of COVID-19
(3 April 2020) The Thai government has implemented a curfew, effective 3 April, that will ban the movement of all people nationwide from 10pm to 4am. In a televised segment on 2 April, Prime Minister Gen Prayut Chan-o-cha announced the curfew, which is effective until further notice. He asked for the public to stay calm and not to stock up on food as they will still be allowed to go out during the daytime, though they will be required to observe social distancing. Medical and banking personnel, as well as logistics workers handling consumer goods, agricultural produce, pharmaceutical products, medical supplies and equipment, newspapers, fuel, post, products bound for export and imported goods, are exempt from curfew restrictions. Curfew violations will result in a jail term of no more than two years and/or a fine of no more than US$1,200. The new ban, however, does not apply to people who already received permission to travel to Thailand. The government’s Centre for COVID-19 Situation Administration (CCSA) therefore, urge affected travellers to contact Thai embassies and follow their instructions.

Vietnam records US$2.8 billion trade surplus in first quarter 2020
(28 March 2020) Vietnam recorded a trade surplus of US$2.8 billion in the first quarter of 2020, higher than the US$1.5 billion seen in the same period in 2019, even with the COVID-19 pandemic impacting its major export markets. The domestic sector posted a trade deficit of US$4.4 billion while the foreign-invested sector posted a trade surplus of US$7.2 billion, according to the General Statistics Office’s (GSO’s) monthly report. The country’s export turnover was estimated at US$59.08 billion during the period, up 1.0% year-on-year while the export value of the domestic sector saw a year-on-year increase of 8.7% to US$18.65 billion, accounting for 31.0% of the country’s exports. Meanwhile, the foreign-invested sector reaped US$40.43 billion from overseas shipments, down 3.0% year-on-year and making up 69.0% of the total.

Singapore Airlines secures US$13 billion to survive pandemic and grow after
(27 March 2020) Singapore Airlines Ltd said it had secured up to US$13 billion of funding to help see it through the COVID-19 crisis and expand afterwards, signalling confidence that travel demand will eventually return. Singapore Airlines’ majority shareholder, state-fund Temasek Holdings, said it would underwrite the sale of shares and convertible bonds for up to US$10.5 billion. Singapore’s biggest bank DBS Group Holdings Ltd has also provided a US$2.8 billion loan. For the time being, the airline has cut capacity by 96% and grounded almost its entire fleet after the Singapore government banned foreign transit passengers. Some financially strong carriers are also banking on a return to more normal times once the pandemic has passed, such as Australia’s Qantas Airways Ltd, which is continuing to refurbish the interiors of its fleet of 12 grounded A380 superjumbos while others including Air New Zealand Ltd and Virgin Australia Holdings Ltd, have warned that they expect to be smaller carriers in the future. According to data provider Cirium, nearly one-third of the world’s aircraft fleet is now in storage.