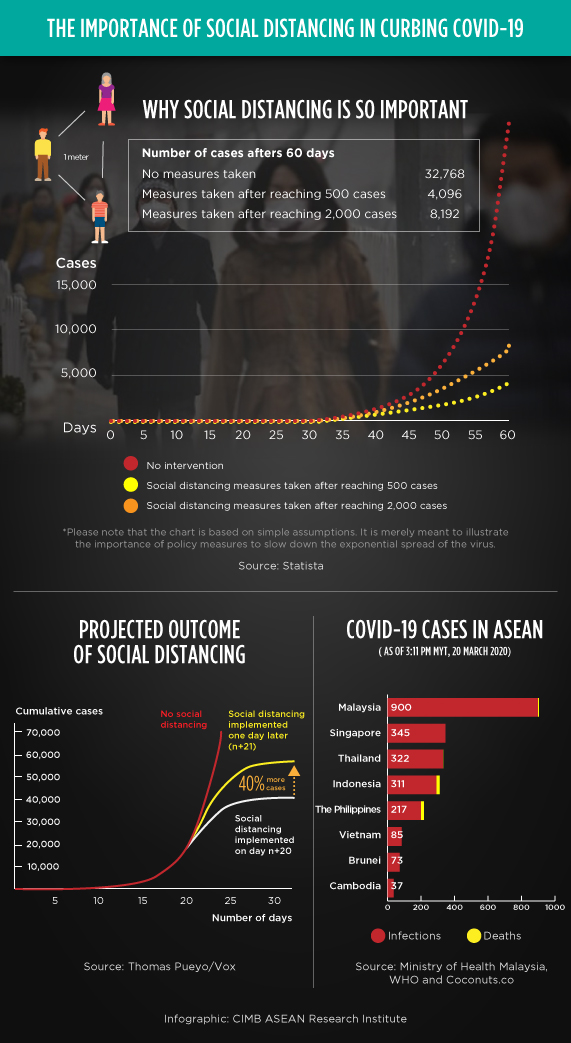 “Aggressive” action needed to stop COVID-19 in Southeast Asia, says WHO
(18 March 2020) The World Health Organization (WHO) has called for “aggressive” action in Southeast Asia on 17 March to stem the rise in COVID-19 infections. It said some countries were nearing towards community transmission of the disease. The number of infections across the region has rapidly increased in recent weeks, forcing several countries to enforce drastic measures including closing their borders to foreign arrivals, imposing night-time curfews to closing schools, and cancelling sports events. “More clusters of virus transmission are being confirmed. While this is an indication of an alert and effective surveillance, it also puts the spotlight on the need for more aggressive and whole of society efforts to prevent further spread of COVID-19,” said Poonam Khetrapal Singh, WHO’s regional director. She emphasised that measures such as washing hands and social distancing were “critical” in the fight against the virus and could “substantially reduce transmission”.

Central banks in the region cut interest rates
(19 March 2020) The Philippines’ central bank, Bangko Sentral ng Pilipinas (BSP), slashed key rates aggressively on 19 March as focus shifts to alleviating an economy battered by the COVID-19 outbreak. BSP Governor Benjamin Diokno announced a 50 basis point (bps) cut to the central bank’s overnight reverse repurchase facility, bringing it down to 3.25% effective 20 March. Elsewhere in the region, Bank Indonesia (BI) slashed its benchmark interest rate, its seven-day reverse repo rate, by 25 bps to 4.50% after a similar-sized cut in February. BI governor Perry Warjiyo said the country’s monetary policies remain accommodative. Meanwhile, in Vietnam, the State Bank of Việt Nam (SBV) announced it would cut many key interest rates, starting from 17 March, in an attempt to support the economy. The refinancing rate has been reduced by 1 percentage point to 5.00% while the discount rate has been lowered to 3.50%. The country’s overnight lending rate in the interbank market has been also adjusted down to 6.00% from 7.00% and the open-market-operation (OMO) rate, to 3.50% from 4.00%.

Philippine stock market plunges by 24% after two-day shutdown, making it worst performer in Asia
(19 March 2020) The Philippine Stock Exchange Index opened on 19 March with a 24.0% drop following a controversial two-day shutdown that accompanied the government’s month-long lockdown of the capital region which began on 15 March. The drop was the index’s biggest intraday-loss in 33 years and brought this month’s loss to about 40.0%, making it the worst performer in Asia. Market volatility has been affected by the virus outbreak, with foreign investors fleeing emerging markets and seeking safe haven assets such as US Treasuries. Foreign investors have sold off US$480.5 million net of local stocks this year, the fastest withdrawals since 1999. The country’s central bank governor warned of a “large and protracted” economic fallout if the current Luzon island-wide community quarantine to fight the virus outbreak fails.

Singapore’s economy forecasted to contract by 0.5% in 2020
(19 March 2020) A recession in Singapore “appears inevitable” as its economy is projected to contract by 0.5% in 2020, a downgrade from the 0.9% growth forecasted in February 2020, according to DBS Bank. This new forecast comes with significant downside risks should the COVID-19 outbreak worsen. The bank expects contractions of up to 2.0% for the first two quarters of 2020 and a contraction for the third quarter before an improvement by the end of 2020. Total retrenchments for 2020 is expected to reach 24,500, slightly above the 23,430 of workers laid-off during the 2008/2009 global financial crisis. DBS Bank also expects the Singaporean government to release a second stimulus package of between US$9.7 billion and US$11.0 billion. It also expects the Monetary Authority of Singapore to take aggressive monetary responses in light of falling inflation and a significant downside risk to growth.

Government allocates US$8 billion to stimulate economy
(13 March 2020) The Indonesian government announced the allocation of US$8.0 billion from its state budget to support the economy by providing tax incentives and subsidies for workers, businesses, and families affected by the COVID-19 outbreak. Accounting for 0.8% of its GDP, the stimulus includes measures such as the exemption of some workers in the manufacturing sector from paying income tax and discount on corporate taxes, Finance Minister Sri Mulyani Indrawati said in a news conference. The stimulus package is expected to widen the country’s budget deficit in 2020 to 2.5% of GDP, up from the initial target of 1.8% of GDP. The tax relief for manufacturing workers will be given to those who earn US$13,000 or less a year while companies in 19 manufacturing sectors will be exempted from paying import tax and given a 30% discount on corporate tax. In addition, refunds for value added tax will be made easier for companies, especially for exporters, to help manage cash flows. Indrawati did not provide details on the rest of the latest stimulus, but said the government would maintain its planned spending despite pressures on state revenue.

Visit Malaysia 2020 campaign cancelled in light of COVID-19 pandemic
(19 March 2020) The Malaysian Tourism, Arts and Culture Ministry has cancelled the Visit Malaysia 2020 tourism campaign in light of the ongoing COVID-19 pandemic, which has affected both the country’s domestic and international tourism industry. The cancellation will cover a freeze of all over-the-counter and online services for the ministry’s tourism licensing services, including for tour guides, tour drivers, tourism training institutes, and the registration of tourism accommodation premises. In line with the recently implemented movement control order in place until the end of March 2020, tourist accommodations will be permitted to continue operating but only at a very minimum level. While new local tourists will not be permitted, guests who are forced to extend their stay due to the movement order may register with tourist accommodations.

Myanmar’s government enforces closure of all land borders to foreign tourists
(19 March 2020) Myanmar’s Ministry of Foreign Affairs announced the closure of land border checkpoints to foreign tourists as a preventative measure against the COVID-19 outbreak. Even though COVID-19 has caused several thousand deaths globally, Myanmar has not confirmed any COVID-19 cases yet. Residents on both sides of the border with border passes will still be able to cross, as long as they undergo health screening, while foreign tourists will still be able to use international airports at Mandalay, Yangon, and Naypyidaw for arrival and departure. Myanmar has a total of 27 land checkpoints with Bangladesh, India, China, Laos and Thailand, but not all of them open to foreign tourists. The border checkpoints with China in Kachin State and northern Shan State and those with Thailand and Laos will now close. Approximately 200,000 foreign tourists use Myanmar’s land borders on a monthly basis, according to the country’s Ministry of Hotels and Tourism.

Cambodia, Japan reaffirm trade commitments amid COVID-19 outbreak
(20 March 2020) Cambodia and Japan have pledged to reach US$2.0 billion in bilateral trade in 2020 despite the impact of the COVID-19 outbreak on their economies. The pledge was made on 16 March at a meeting between senior Cambodian and Japanese officials, according to Cambodia’s Ministry of Foreign Affairs and International Cooperation spokeswoman Chea Kimtha. In 2019, trade between the two countries exceeded the US$2 billion mark. The officials committed to expanding bilateral trade and investment, and agreed to urge the relevant institutions to work closely together to improve the investment environment in Cambodia to attract more Japanese investors. “The Japanese side reaffirmed its commitment to continue assisting Cambodia, especially in priority sectors such as logistics, infrastructure, industry and human capacity building,” Kimtha said. Cambodia exported more than US$1.7 billion worth of products to the Japanese market in 2019, an increase of 7.7% from 2018, according to the Japan External Trade Organisation (JETRO).

Bruneian banks agree to defer financing and loan repayments for up to six months
(20 March 2020) The Bruneian government and banking industry agreed to defer financing and loan repayments for up to six months for four sectors to help mitigate the economic impact of the COVID-19 outbreak. Among the areas which this policy will apply to include tourism, hospitality/event management, food and beverage, and aviation, as well as importers of food and medical supplies. The deferral on repayments will apply to principal repayments and not on interest and profit rates. The interim deferments were initiated by Brunei’s central bank, Autoriti Monetari Brunei Darussalam (AMBD), along with the Ministry of Finance and Economy (MOFE) and the Brunei Association of Banks (BAB). In addition, all bank fees and charges related to trade and payment transactions for companies in these sectors will be waived for six months, while local interbank transfer fees for all customers will also be waived for the same period.

Brunei allocates US$2 million to prepare for ASEAN chairmanship
(12 March 2020) The Bruneian government has set aside US$2.0 million to prepare for the hosting of the ASEAN Summit in 2021, the second finance and economy minister Mohd Amin Liew Abdullah said during the 16th Legislative Council (LegCo) sitting on 12 March. The fund was allocated as part of the ministry’s miscellaneous expenses for the 2020/2021 financial year. Brunei has established the ASEAN national committee that will oversee preparations for the summit. According to second foreign affairs minister Erywan Pehin Mohd Yusof, Brunei can play a bigger role in regional and international fora together with other ASEAN member states. The country last hosted the ASEAN Summit in 2013. Erywan said it is imperative for the country to continue strengthening its diplomatic relations with neighbours to ensure foreign policy strategies can be properly executed. “In a world of unprecedented geopolitical and economic turmoil, such as the crude oil production dispute; trade disputes; COVID-19 outbreak; climate change; terrorism and extremism threats, Brunei as a small developing nation cannot stand alone in this interconnected and globalised world,” he said.