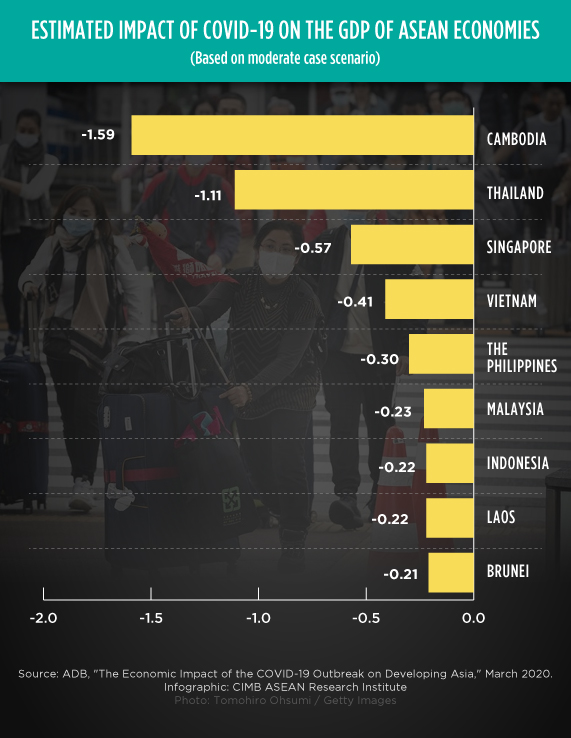 COVID-19 could cut global growth by 0.1% to 0.4%
(6 March 2020) The COVID-19 outbreak could trim GDP in developing Asia and around the world by 0.1% to 0.4% in 2020, the Asian Development Bank (ADB) said on 6 March. Financial losses forecasted from ADB analysis, which took into consideration best- and worst-case scenarios, could reach between US$77 billion and US$347 billion. In China and developing Asia (excluding China), economic growth could be reduced by 0.3% to 1.7% and 0.2% to 0.5%, respectively. Among ASEAN countries, under the moderate case, Cambodia could see its GDP shaved by 1.59%, followed by Thailand (1.11%), Singapore (0.57%) and Vietnam (0.41%). The rest of the ASEAN economies (except for Myanmar) is forecasted to see a reduction in GDP in the range of 0.21% to 0.30%. According to the ADB, developing Asian countries that will be significantly affected are those with strong trade and production linkages with mainland China. Many of the economies that rely heavily on tourism, especially those that see a significant share of tourists from China, will also be materially affected by the COVID-19 outbreak.

Metro Manila to be placed on lockdown for 30 days
(12 March 2020) Metro Manila, a region of 12 million people, will be placed on lockdown between 15 March to 14 April, 2020, to help contain the spread of COVID-19. This was announced by President Rodrigo Duterte in an address on 12 March after declaring that the alert level for the virus outbreak has been raised to its maximum level of Code Red Sublevel 2. The lockdown involves 16 cities and one municipality, and will prevent inhabitants from travelling outside the city. The lockdown bars all land, domestic air and domestic sea travel to and from Metro Manila, and also includes “community quarantine” although this was not elaborated. As of 12 March, the Philippines has recorded a total of 52 cases.

More than 300 workers in the tourism industry have lost their jobs since February 2020
(11 March 2020) More than 300 workers from 19 tourism-related establishments have lost their jobs since February 2020 due to the COVID-19 outbreak, in particular, due to curtailed travel from China, which is the Philippines’ largest tourism market. The businesses which laid off more than 300 workers are expected to be closed by April, June or August 2020, depending on when their operations would return to normal. A total of 47 companies with 4,416 workers have implemented flexible work arrangements including reduced working hours and forced leave, and these included hotels, restaurants, and manufacturers. Should the COVID-19 outbreak last until June 2020, the National Economic and Development Authority expects job losses in the tourism sector to range between 30,000 and 60,000. It also predicted that there could be a 0.5%-1.0% cut in GDP growth in 2020.

Thailand announces US$12.5 billion stimulus package
(10 March 2020) The Thai cabinet approved a stimulus package worth US$12.6 billion on 10 March to mitigate the impact of the COVID-19 outbreak. The package will cover all sectors and is designed to benefit 14.6 million low-income earners who account for 22% of the Thai population. According to Finance Minister Uttama Savanayana, the package includes “soft loans” valued at US$4.7 billion, which the Government Savings Bank (GSB) will lend to commercial banks at just 0.01% interest. In addition, the package includes a moratorium on principal payments, debt payments extension, and the right to borrow from special financial institutions such as the GSB and the Bank for Agriculture and Agricultural Cooperatives. Withholding tax will also be reduced from 3.0% to 1.0% from April to September 2020. Prime Minister Prayut Chan-o-cha said the package is a first-phase measure “that could be followed by second-phase action if the impact persists.”

Cambodia allocates up to US$2 billion to counter economic fallout from COVID-19
(10 March 2020) Cambodia announced on 10 March the allocation of between US$800 million to US$2 billion to address the adverse impacts on the economy from the COVID-19 outbreak. The government’s allocation of funds is based on two scenarios of the pandemic. US$800 million is to be allocated for a period of six months and US$2 billion is to be allocated if the outbreak lasts longer than a year, Prime Minister Hun Sen said. According to a spokesperson from the Ministry of Economy and Finance, the government has collected higher-than-expected tax revenues from robust economic growth over the last five years and it would be used to pay workers affected by factory suspensions and for tax breaks announced for tourism-related businesses. The Cambodian government had previously announced on 5 March that it would spend US$30 million to finance screening and monitoring efforts, as well as halve capital expenditures at all ministries and state institutions.

Indonesian government to relax import restrictions to help struggling manufacturing industries
(12 March 2020) Indonesian Finance Minister Sri Mulyani Indrawati stated that the government is planning on reducing restrictions on imports to help manufacturing factories facing supply chain disruptions of raw materials from China due to the COVID-19 outbreak. The government plans to reduce the number of restricted import goods by up to 50%, with as many as 749 harmonised system codes to be scrapped. Among the items included in the list of restricted import goods include ceramics, textiles, health equipment, and footwear. Around 20% to 50% of raw materials for Indonesia’s industries are usually sourced from China, its largest trading partner. The government is also preparing several stimulus packages, including one that would reduce logistics costs in ports across the country.

Tech firms in Penang state suffers due to supply chain disruptions
(10 March 2020) Tech firms based in the Malaysian state of Penang have seen their revenue growth for 2020 flattened due to supply chain disruptions caused by the COVID-19 outbreak in China. This is in contrast to 2019, when the island state benefited from historically high inbound investment as firms fled the US-China trade tension. The investment target for 2020, about US$1.2 billion, is a third of what it received last year. Penang state accounts for about 8% of global back-end semiconductor output. Penang-based firms had also seen record sales in 2019 as customers sought to escape US tariffs on Chinese exports. Analysts and local firms said the impact of the virus outbreak on sales will be felt during the April-June 2020 period, when stockpiles run out. One analyst predicted that the forecast for year-on-year growth of the semiconductor sector will fall from 5.5% to a range of between -20.0% (worst case scenario) and 2.5% (best case scenario), but will most likely be -3.0%.

Brunei government expected to face budget deficit of US$1.47 billion
(11 March 2020) Brunei’s government expects to face a budget deficit of US$1.47 billion in the 2019/2020 fiscal year due to declining revenue from the oil and gas sector. This is despite Brunei enjoying 3.90% GDP growth in 2019, its highest rate in 13 years. The kingdom is projected to face budget deficits for both the 2019/2020 and 2020/2021 fiscal years. The government predicts that GDP will increase by between 4.9%-7.1% in the 2020/2021 fiscal year, but will still face a budget shortfall as government revenue in Brunei is less correlated to GDP growth as other countries. The 2020/2021 budget will be focused on four main thrusts: increasing investment activity, increasing ease of doing business, generating high-value human capital, and preserving public welfare.

Malaysia strengthens ties with Laos to boost tourist arrivals
(9 March 2020) Tourism Malaysia launched the “Malaysia Tourism Seminar and B2B Session,” as part of the Malaysian Golden Month Holiday Campaign to promote the country to the ASEAN market, at the Landmark Hotel in Vientiane, Laos. The event provided a networking and collaboration platform especially for package development and promotional efforts in conjunction with Malaysia’s Visit Malaysia 2020 (VM2020) campaign. Aside from boosting arrivals from Laos, the programme was also initiated to strengthen cooperation between Laos and Malaysia, as both countries have a long-standing relationship. Malaysia’s Ministry of Tourism, Arts and Culture and Tourism Malaysia has identified ASEAN countries as a key market to mitigate losses due to the negative effects of COVID-19. From January to September 2019, Malaysia received 20,959 tourists from Laos, an increase of 13.8% compared to the same period in 2018. Malaysia hopes to welcome a total of 30 million tourists, and US$24.4 billion in tourist receipts for VM2020.

Trade, security issues expected to dominate Vietnam’s ASEAN chairmanship
(9 March 2020) As the chair of the Association of Southeast Asian Nations, or ASEAN, analysts say Vietnam is expected to feature trade and security at the top of its agenda. Out of the several priorities announced for its ASEAN chairmanship, economic and defence cooperation are the two areas expected to make the most progress. For 2020, Vietnam said it will push for more tariff reductions, including dropping its sugar tariffs, an important industry for its domestic firms. This resolve to conduct more trade in the region has made foreign investors optimistic about the Southeast Asian region, according to Eduardo Pedrosa, secretary-general of the non-profit Pacific Economic Cooperation Council. On the part of security, Vietnam has been the most vociferous in its claim to parts of the South China Sea (SCS), even though several other ASEAN member states also claim parts of the SCS. Hanoi has all the more reason to rally its neighbours around a code of conduct. Beyond that, Vietnam is also supported by its relationship with the US, which also wants to ensure no single power dominates the sea.